Welcome back to the 1/18 scale Lucky Lady rebuild. Last we were here (Part 1, Part 2) I had finished up the nose landing gear and had bonded the gear struts in the extensions I needed for the desired aircraft orientation. Now to tackle the very confined and busy nose landing gear (NLG) bay. The toy’s NLG bay is just inadequate in every way except one – its basic shape was about right. So I was able to salvage most of the walls, but not all. In order to get it to the level of the main landing gear (MLG) bays, much work needed to be done.

Here is a shot of the basic unmodified bay: 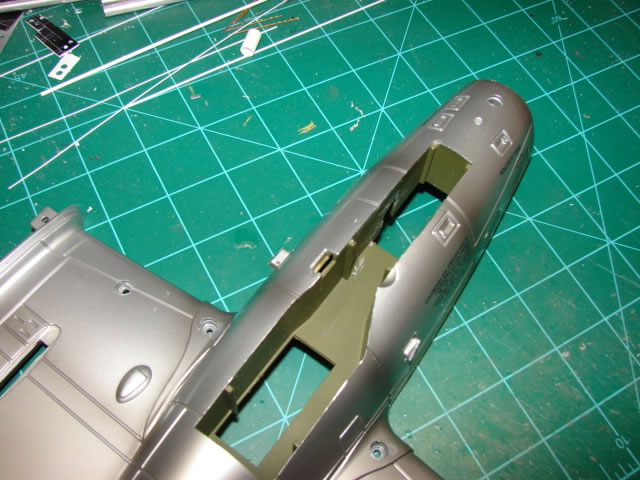 The most serious shortcoming is up front where there is no means of supporting the wide triangle truss NLG upper strut, clearly seen in part 2. The actual aircraft has widened auxiliary bays in the forward area of the NLG bay, so I sought to model those bays. No P-38 model I know of, of any scale, has these auxiliary bays. So I dremeled away a good portion of the entire bay in order to accept new scratch built aux bay details: 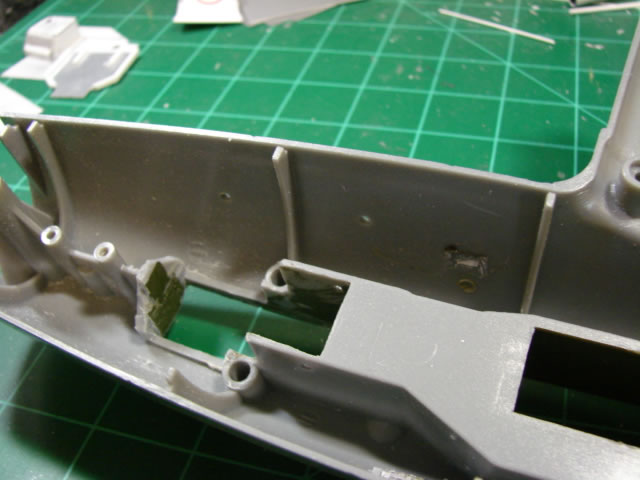 It should be mentioned that 21CT models have generous gauges with tough plastic. Carving away parts of the toy carries with it a risk of getting hurt. Care must be taken to keep from dremeling or sawing or slicing one’s body parts in the process!

New scratch built parts made of plastic sheet were made. The hard part was computer designing and modeling the new parts in a way that is easily made on the bench, and to get the landing gear attach points exactly right. In the picture you can clearly see the aux bays with the holes for the LG strut proper. You can also see the attach holes for the drag strut. Take a look: 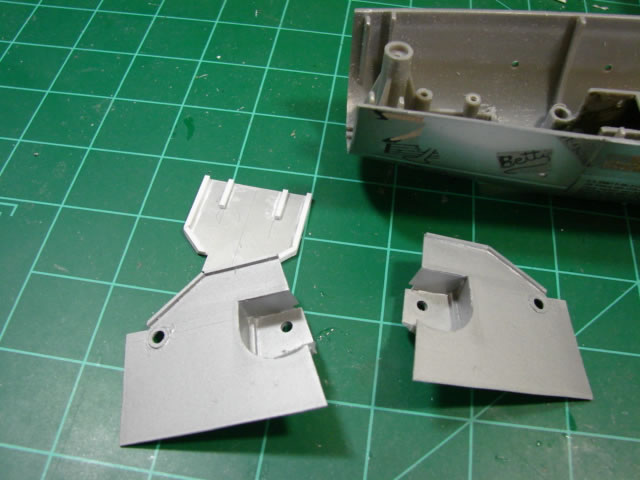 And here are those details installed, inside and outside: 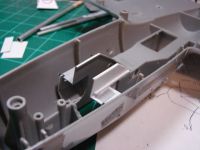 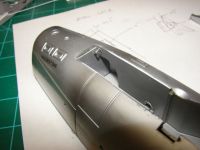 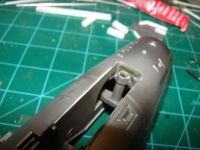 Now the NLG bay was ready for the wide-stanced truss-strengthened NLG strut, as you can see in that last shot. That was important to me. But I have to tell you, now that I can look at the finished product (and you cannot yet), you really cannot see it without a flashlight on the upside down model.

Here is a shot with the forward section of the NLG bay completely closed out: 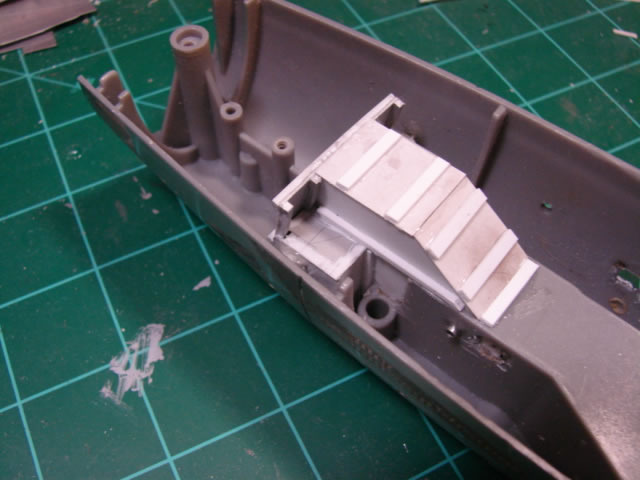 So with that completed, it was time to plumb this big cavity. Few P-38 modelers have attempted to do this. Large scales like 1/18 really helps.

Let’s start aft. On the actual aircraft, the aft bulkhead is not a bulkhead at all, but a canvas cover which covers a snake’s nest of hydraulics aft of it. This, I did not go after. Instead I kept the simple plastic wall, but showed a few hydraulic lines coming out of it. I think I got all of them: 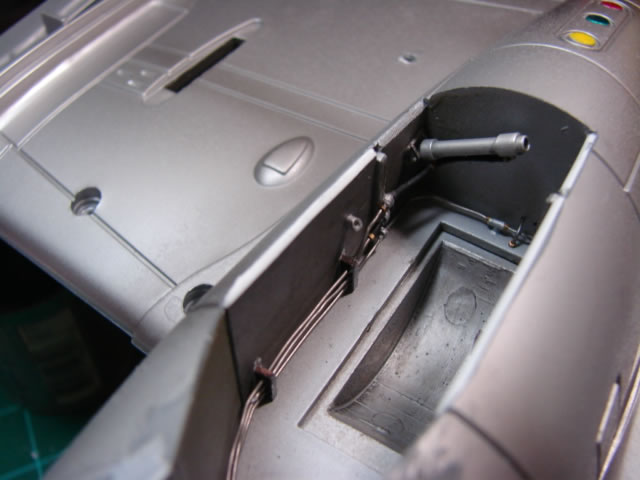 Note the pocket for the tire. It isn’t right; the actual pocket is curved in the sides, but it will have to do. Also note the hydraulic cylinder. This is for the door actuation. You will see the rod on the door in this part. 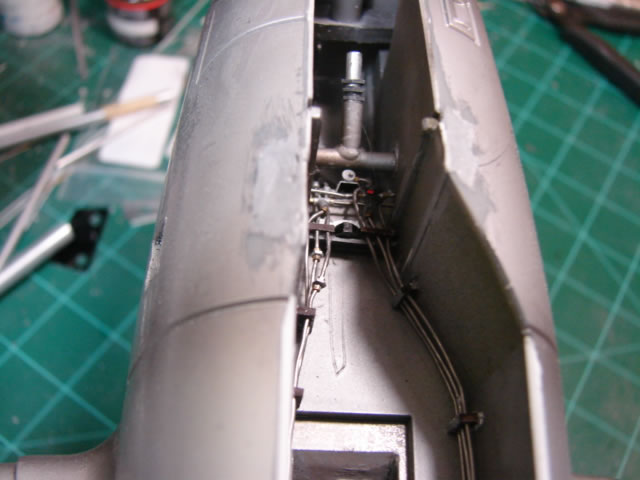 This shot shows the hydraulics but also the upper portions of the LG strut and the drag link, which gives an indication how the NLG is attached: 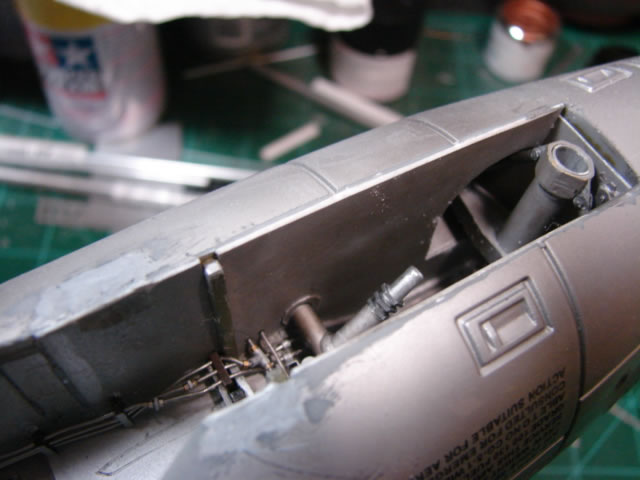 And the finished NLG bay, another in a series of big milestones on this huge build: 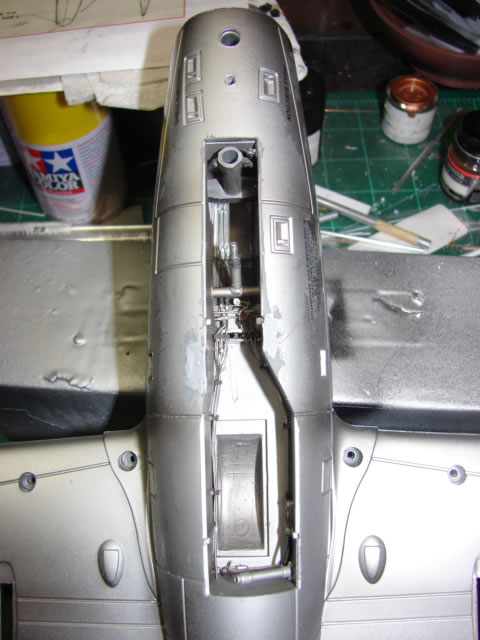 The NLG door required nearly a complete re-do. Not surprisingly it was essentially a contoured plastic plate with its own completely inaccurate means of attaching it to the fuselage. This is a similar theme for the MLG doors (to come later) and the Miss Velma P-51D LG doors. My plan was to use the existing part for contour purposes only – essentially to use it as an inner panel. And modify from there. So off came the attachment bosses, and trim away the periphery: 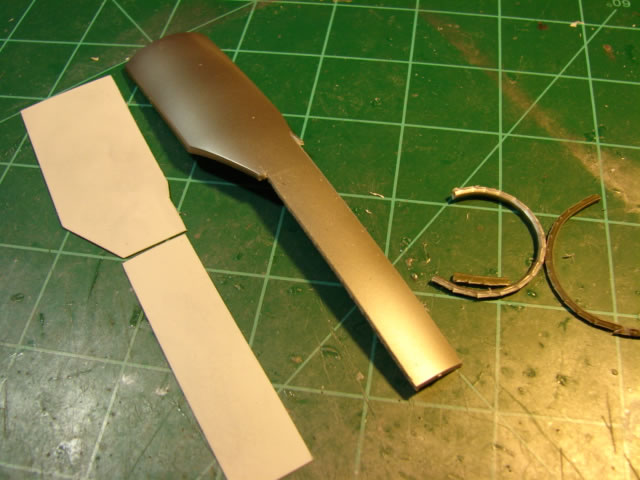 I wish I had chronicled the door panel work more, sorry. But suffice it to say I had to build up the inside of the door substantially to provide the stiffening elements that the real door has. The real door, BTW, has a bulge for the tire that is clearly visible, and which I didn’t model because I just didn’t know how. This just HAD to be a minor battle-lost in the original design. You will see the inside panel momentarily, but first the “Studebaker” hinges!

At the onset of this project, I intended to go after the complicated multi-bar scissor hinges that P-38 landing gear doors are attached with. Due to the contoured lower surfaces of the center fuselage pod, and the booms on either side, some sort of gooseneck hinge is required (a “piano” hinge won’t work). Why a complicated linkage was chosen, I am not sure, except that the linkage appears to not take up as much space as a simple gooseneck hinge. And space is at a premium in the LG bays.

For me, that was a challenge accepted. Take a look at the micro-modelling required for these parts: 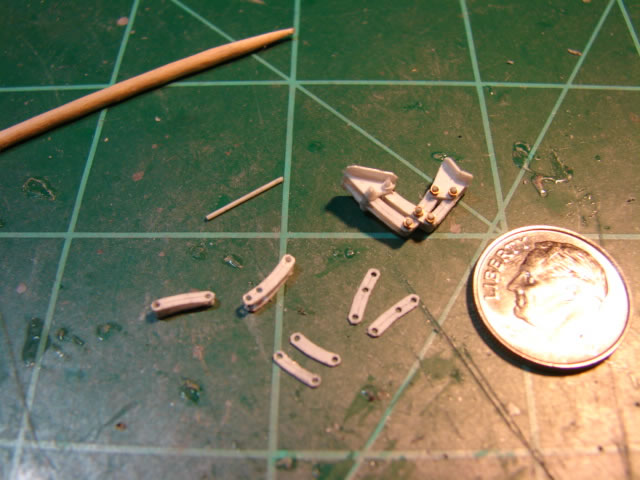 Individual parts are simply cut from .010 or .015 plastic sheet (with powerful magnification glasses). I used scads of metallic nuts on little .020 inch diameter plastic rod. OMG – what a nightmare. Hundreds of parts…

Here are the four linkage supports required for the NLG door: 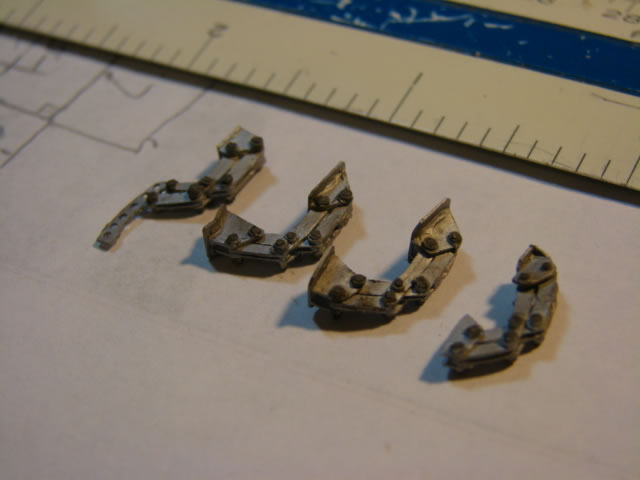 The linkage details are identical at all four locations, but the fittings on either end are different. They are tailored for the door or NLG bay structure they attach to.

Here is the finished NLG door panel, with its crazy Studebaker links, and also its drive rod which will mate up with the cylinder you have already seen, in the NLG bay: 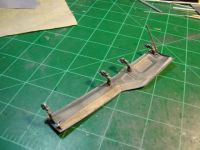 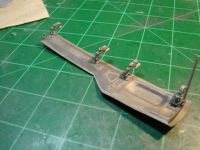 Astute viewers will also notice the lock mechanism on the forward end of the door.

I made the external skin panels from scratch from plastic sheet, and unfortunately the panels reacted badly to the glue used to attach them to the existing toy part which served as the inner panel of sorts. 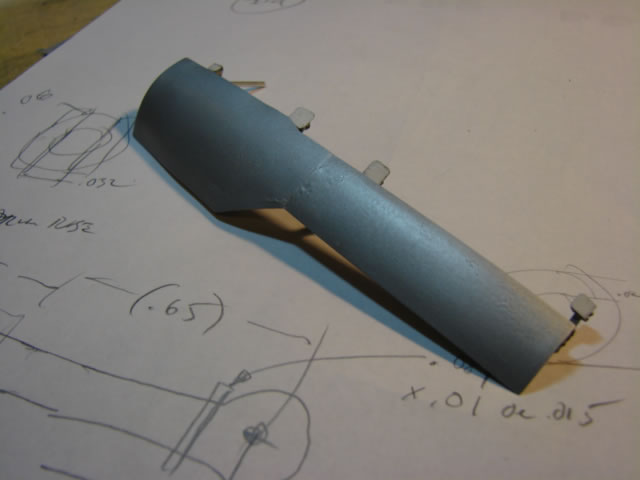 But with some sanding and then hundreds of drill starts to simulate rivets, the wrinkling became hard to notice.

So what have I done here? Take a look at this dry fitting: 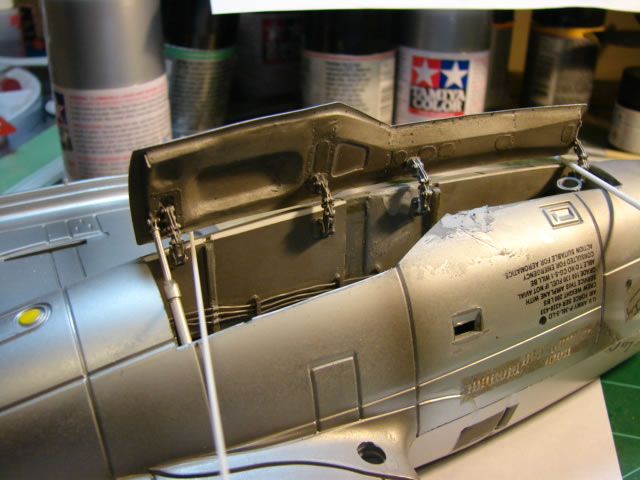 The door didn’t fit very well, but the hinges are fairly flexible. And when it became time to final install the door, it was just fine. But I get way ahead of myself…

At this point, I kind of spontaneously “pivoted” to the propellers. They needed a lot of work too. But in order to do so and paint the spinners before the prop blades are installed, I had to decide the paint scheme of the aircraft. So I did. And after a whole lot of brooding I selected “Lucky Lady” – P-38J-15LO, 20th Fighter Group, pilot Eric Heiden who is fairly well known among P-38 drivers and has written much on flying the P-38. I did this partly because I thought I could actually create the decals for the nose art and scoreboard. Here is a period photo: 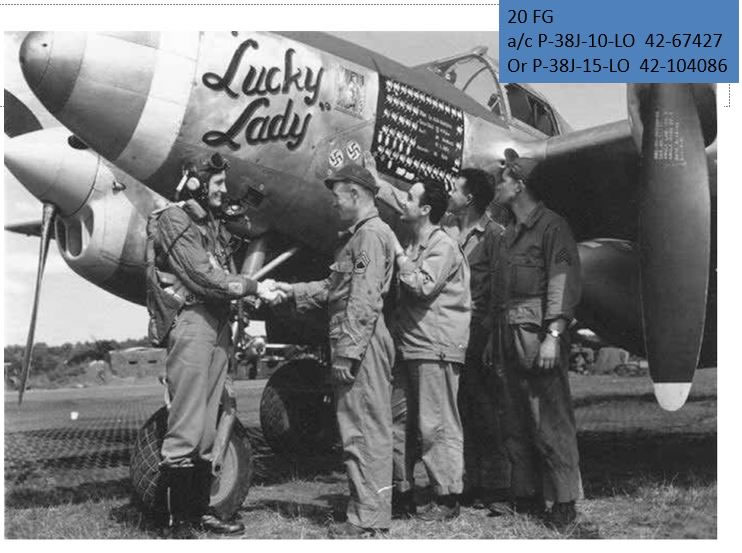 And this from little friends on the web: 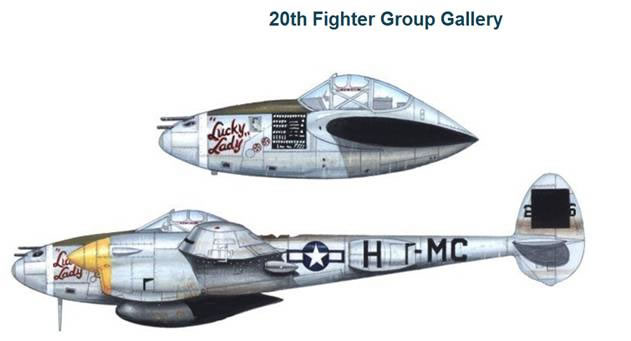 This aircraft actually had a photograph of actress Lorraine Day painted or pasted on the side of the fuselage. She had apparently consented to contribute to the war effort in that way, and travelled and met the crew which must have been a great thing for morale. Anyway I searched for that photograph and could not find it, but I picked one anyway and made a decal of it: 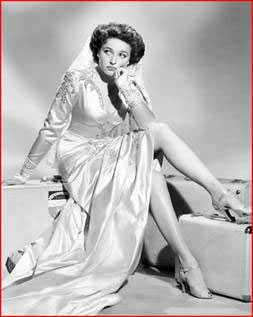 Also, the scoreboard for this aircraft was quite impressive: 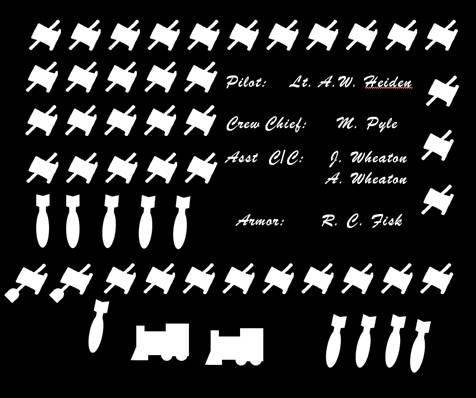 So now I could do the props. The existing props were just one problem after another. They were too large diameter, but I could not do much with that if I were to salvage the engine cowls (which I did). The prop blades were misshapen, and there should be prominent holes where the props enter the spinners. Unmodified: 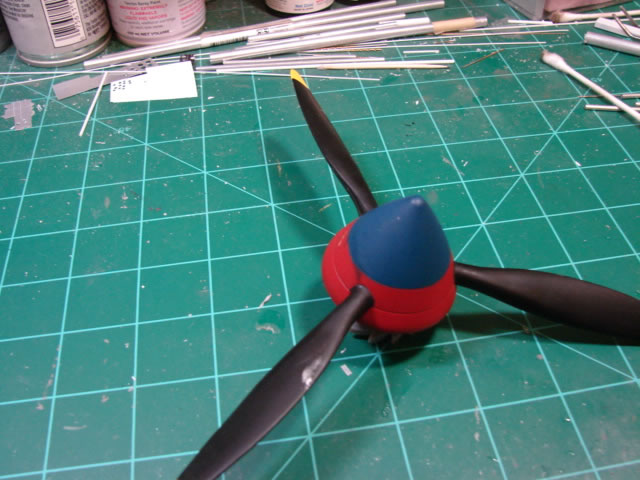 The props had to be just about destroyed to get them dis-assembled. So I had to make new spinners. Look at these lathe-turned spinner parts: 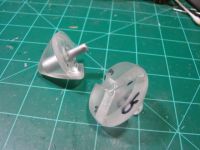 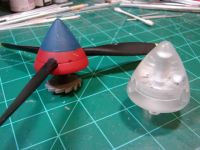 The blades, of course, were cut off: 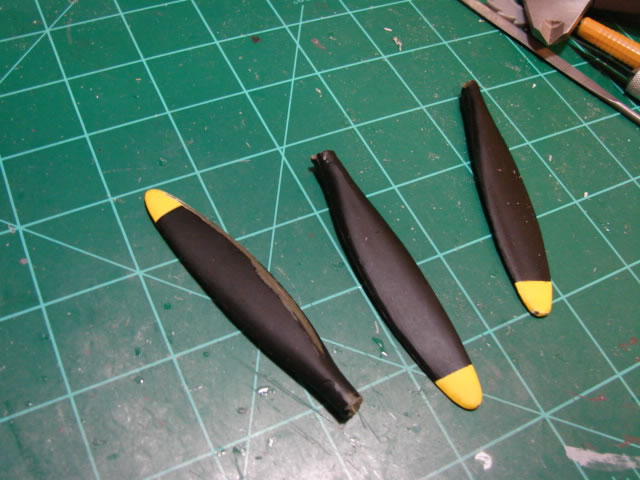 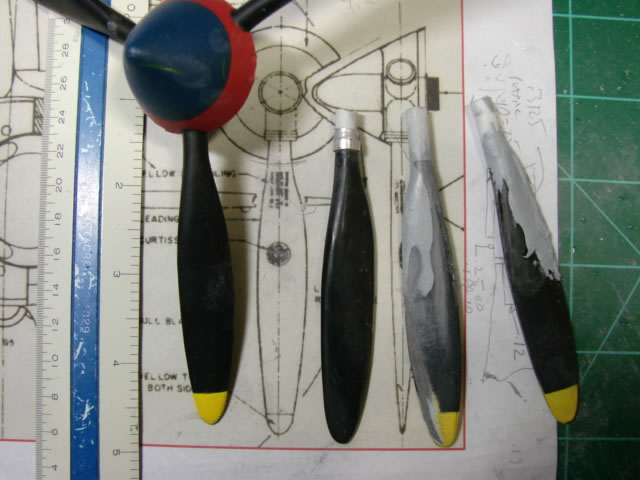 I made some decals, by far the hardest was the Curtiss Electric emblem. And then I had finished prop blades: 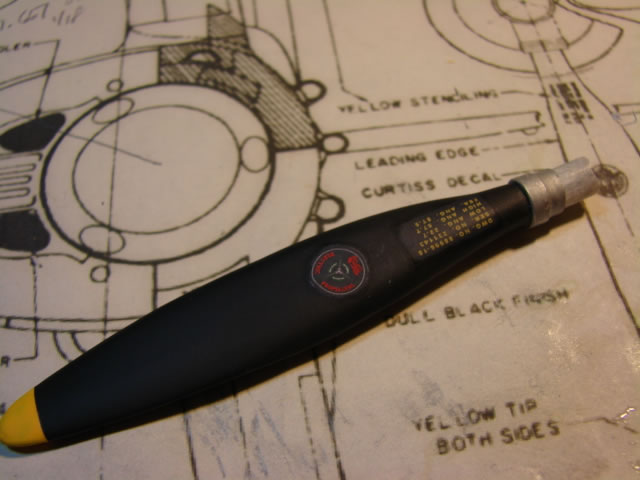 With the assistance of a fixture of sorts which positioned prop blades at exactly 120 degree angles, we now have finished props, and yellow as appropriate for Lucky Lady: 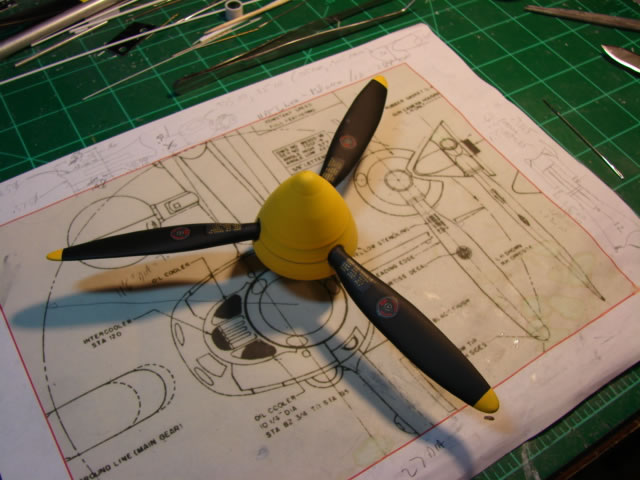 That is all for now. Next part (part 4) will chronicle the wild adventure of the cockpit and the canopy. Stay tuned.