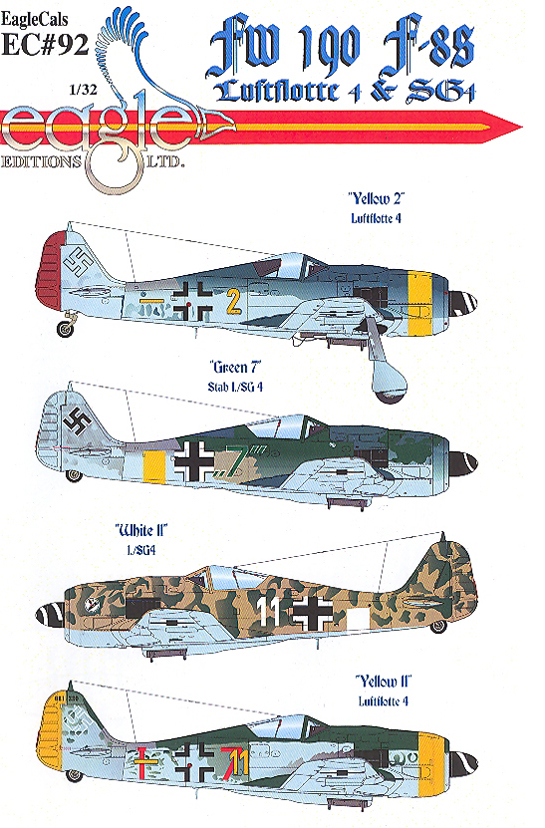 Eagle Editions has released EC#92 and provides us with four interesting schemes for the Hasegawa Fw 190F-8 in 1/32nd scale. Additional choices can be found with EC#91, reviewed here.

The next choice is “Green 7” of Stab I./SG4. The werknummer and pilot are unknown. This aircraft displays a very rare marking of the number “7” with German style quote marks. It is finished RLM 74/75/75 with patches of RLM 83 Dark Green.

The third aircraft is “White 11” of 1./SG 4. Like the previous aircraft, the werknummer and pilot are not identified. The colorful Mediterranean finish is RLM 76/79/80.

The instructions provide all the necessary information for the modeler. This includes side profiles, a listing of all available references and six photos of each of the four aircraft. 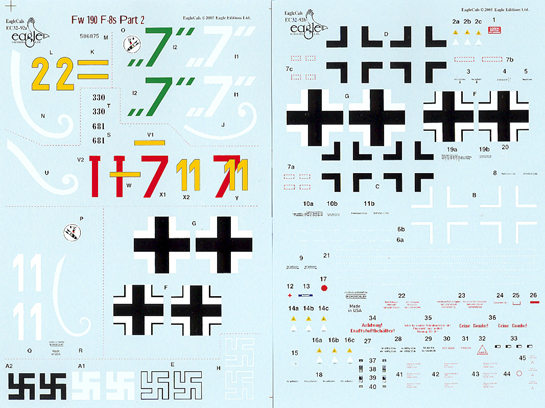 The decals are printed by Microscale. They follow the same format as EC#91, with specific aircraft markings on one sheet and common markings on the other. Given Microscale’s reputation for quality printing, I expect no problem with these decals.

Eagle Editions continues to provide the modeler with accurate decals and resin parts for 1/32nd scale aircraft. Fw 190F-8s were very colorful and I expect this sheet to sell well. If accuracy is important to you, then I recommend giving EagleCals a try.