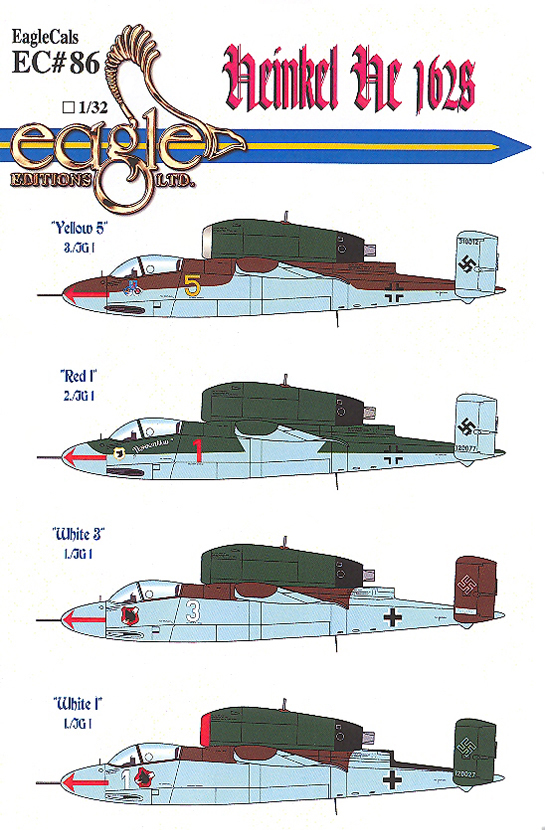 Eagle Editions now provides eight schemes for the Heinkel 162 in 1/32nd scale. These decals are to be used with Revell Germany’s highly detailed kit, first released in 2004. The schemes are provided over two decal sheets. This is a review of the first sheet, whereas EC#87 can be reviewed here.

The He 162 saw very limited use at the end of the war, seeing service with JG 1. All the schemes are from that unit. This sheet provides the modeler with four options.

Next is “Red 1”, W.Nr. 120077, flown by Lt. Gerhard Hanf, Staffelkapitan with 2./JG 1. These markings are also supplied with the kit. This aircraft now resides at the Planes of Fame Museum in Chino, California. Further information about this aircraft was also gained during conversions with the pilot from 1987 to today.

The third option is “White 3”, W.Nr. 120028. The aircraft depicts its operations at Parchim and Ludwigslust Germany, when flown by Fhj. Fw. G. Kirchner.

The instructions provide complete painting details incorporating side, upper and lower views. The official color diagram is included, however there are variations between RLM 81/82/83 and RLM 70/71 as stated in the text. For modelers wishing to make there own interpretations, four previously published photos are included. Additional references are identified for those modelers with access to a good reference library. Complete stenciling information is also provided. 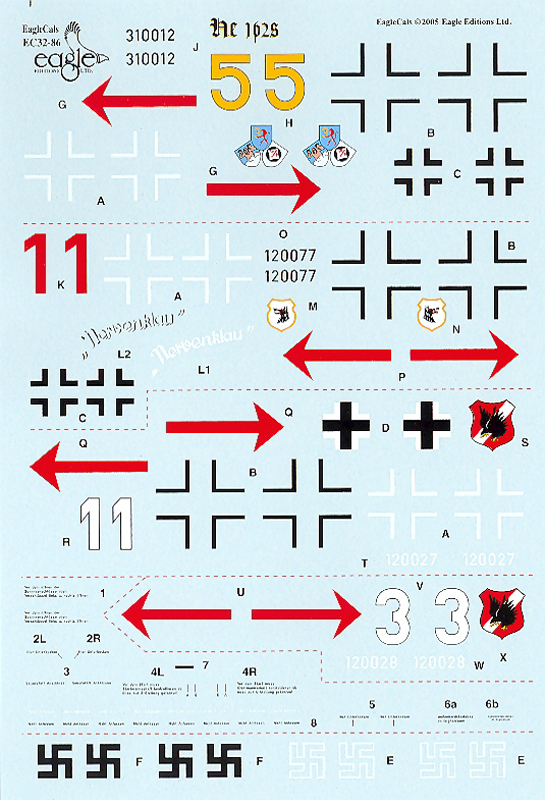 The decals are printed over a single page. Density and printing looks very good and I anticipate little trouble applying them. There are enough national insignias to complete two aircraft with stenciling only for a single aircraft. However, additional stenciling is also provided with the kit. Modelers should also note that swastikas are not available with the kit and may be correctly added with the purchase of this sheet.

Eagle Editions more than adequately covers any possible scheme for the He 162. We can now dress up the kit with aftermarket resin detail sets from a number of manufacturers and these various decal choices. I recommend these decals to anyone looking for accuracy or something a little different for their build.