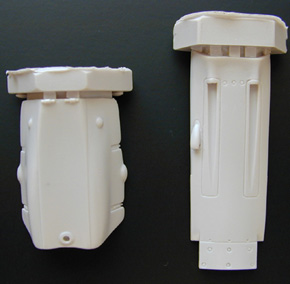 Eagle Editions has released a number of new resin detail sets for the New Tool Hasegawa Dora in 1/32nd scale. Among them, two different styles of gun cowlings are now available. This is a review of the latter, three piece cowling.

The latter gun cowling was the most common type fitted to the Dora. Using original parts as references, masters were created. This ensured that the gun cowl captures the correct outline. Unfortunately, this is one failing of the Hasegawa kit as the fairing bulges are too pronounced and incorrectly located. The cowling consists of fore and aft pieces and two small oval bumps. The oval bumps are to be used on the cowling as some aircraft were fitted with oval rather than round bumps. 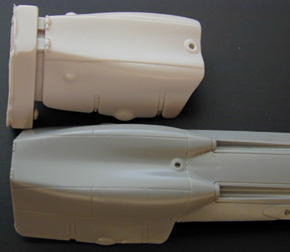 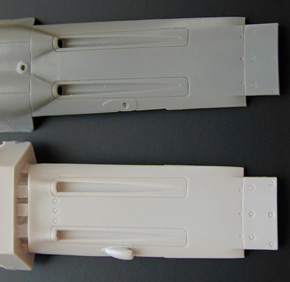 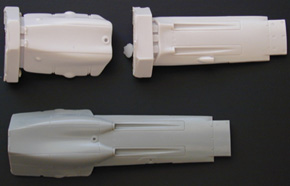 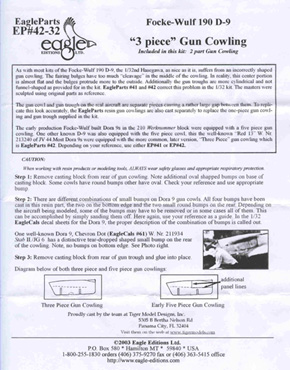 Single page instructions are included with the set. They are simple and easy to follow. This is likely due to the straightforward nature of this installation. A small photograph, though not the best quality, identifies the attachment of two oval shaped bumps. This arrangement can be found on Chevron Dot, W.Nr 211934, reviewed on EagleCals #61. Diagrams are also included depicting the differences between the three and five piece gun cowl.

The resin parts were cast by Tiger Designs. This is a departure from other EagleParts resin items. The cowling is cast in two pieces. This was done to accurately capture the large gap found between these panels on the actual aircraft. A single, large casting block needs to be removed from both items. It should be easily accomplished with a razor saw and sand paper. The panels are designed as direct replacements for the kit parts.

These new items from Eagle Editions are a welcome addition. This should aid in accurately capturing the outline of the Dora. This should be quite evident as seen in the photo of Jerry Crandall's completed model accompanying this review (5 Piece Cowling shown). The casting is without flaw, though I have not tried the fit for this review. I can state with confidence that you will not be disappointed.