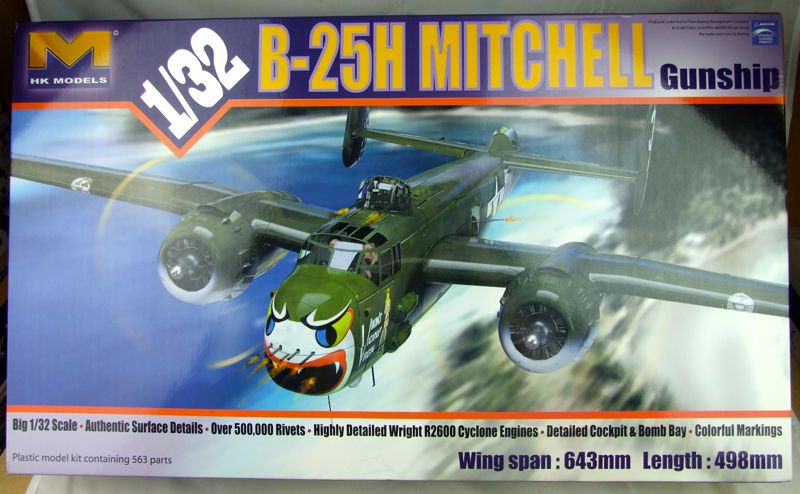 The HK Models 1/32 B-25 kit arrived to great fanfare in late 2012. This original kit was a B-25J, released in both "Strafer" (reviewed on LSP by Brian Leitch, who also did a build review of the same kit) and "Glass Nose" versions. A year or so later and we now have the B-25H "Gunship", which features a shorter, solid nose packed with four .50 machine guns and a massive 75mm cannon.

The first thing that strikes you with this kit is just how big it is! And well it should be, with the box top boasting a parts count of 563. I removed the lid, expecting to see a standard, shoebox-style container full of parts, but in fact the lid is more of a cover for the actual box, which is merely a sturdy brown cardboard box with a tabbed lid: 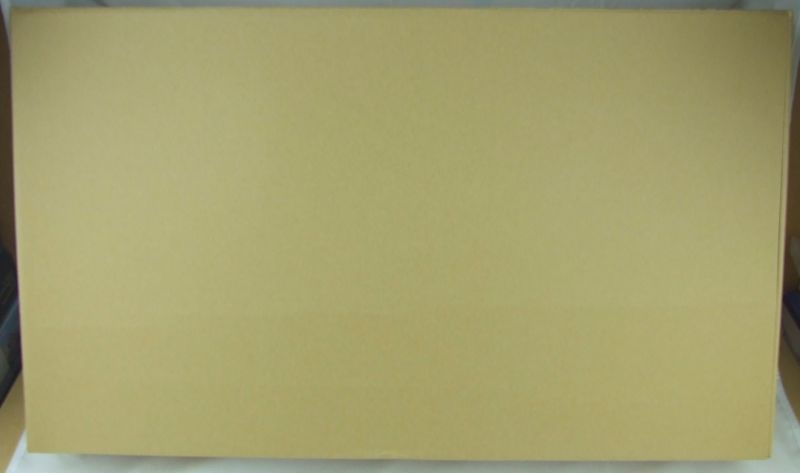 Lift the lid and behold the contents: 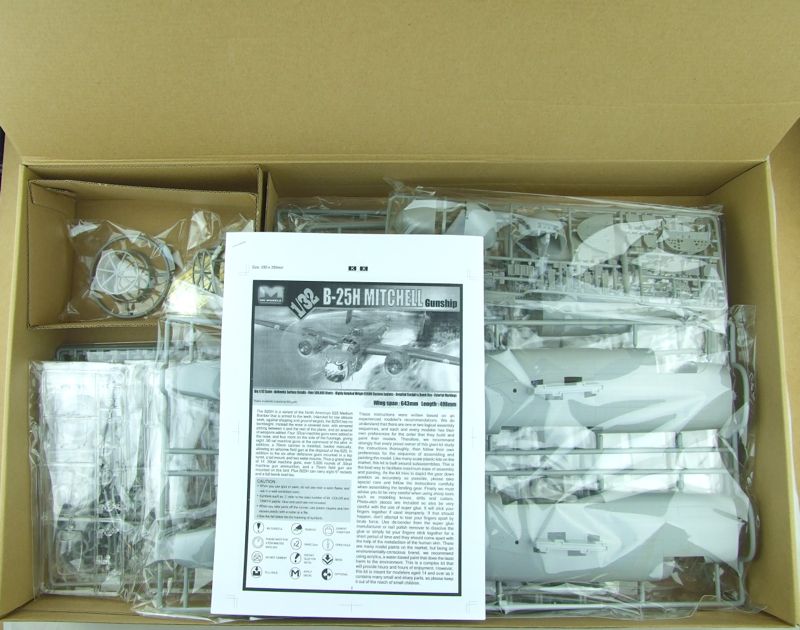 There are an astounding 26 grey plastic sprues in this kit, of which 6 contain the major airframe components. 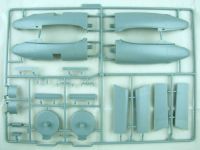 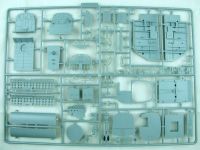 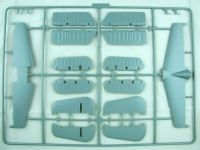 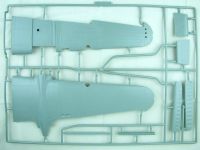 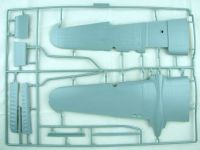 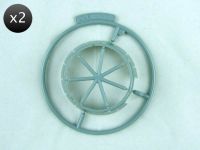 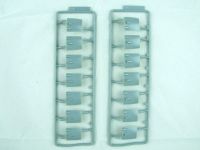 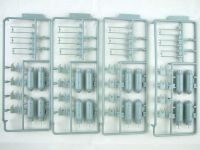 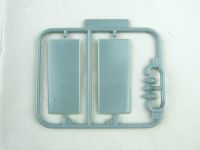 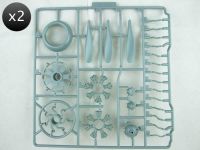 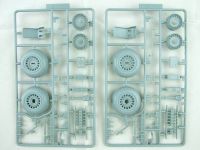 The new nose can be posed in the open position to expose some really nice detail in the gun bay.

The surface detail is first-class, being crisp, petite and finely-moulded: 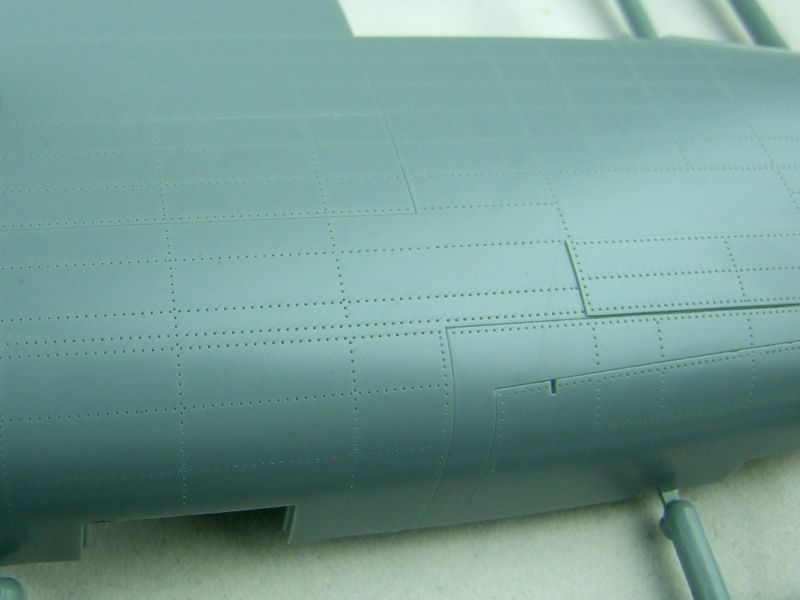 The internal detail on the fuselage parts is somewhat sparse, and also somewhat marred by numerous ejector pin marks: 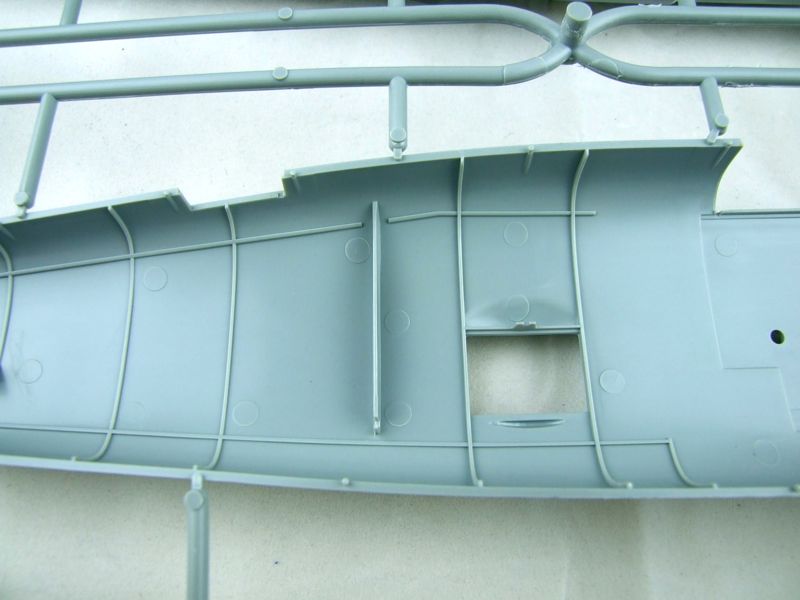 These should present no real difficulty in removal however, and the large fuselage cavity certainly provides plenty of scope for the aftermarket or the ambitious super-detailer.

The cowling parts are each moulded on individual sprues, with plenty of protection for both the delicate flaps and the fragile forward ring frame: 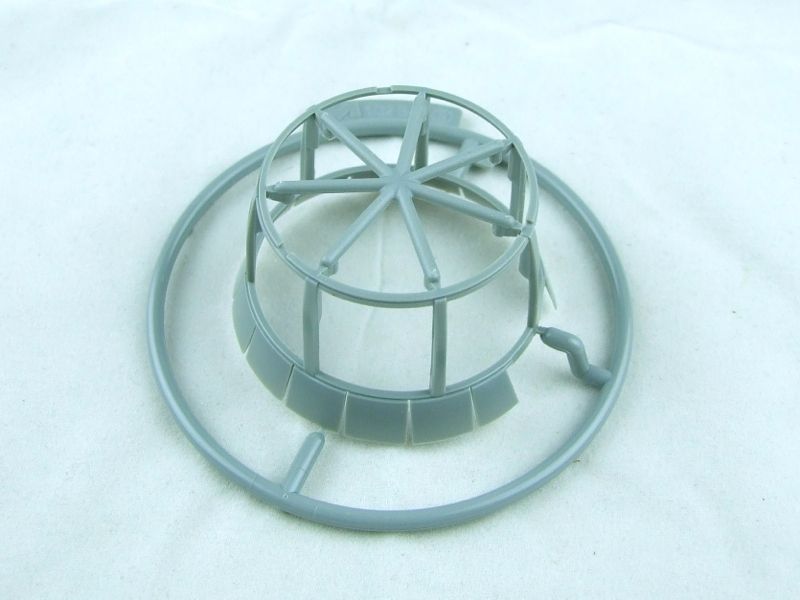 The inside of the wings also features plenty of reinforcement, which should help those large parts retain their shape and sit when fitted: 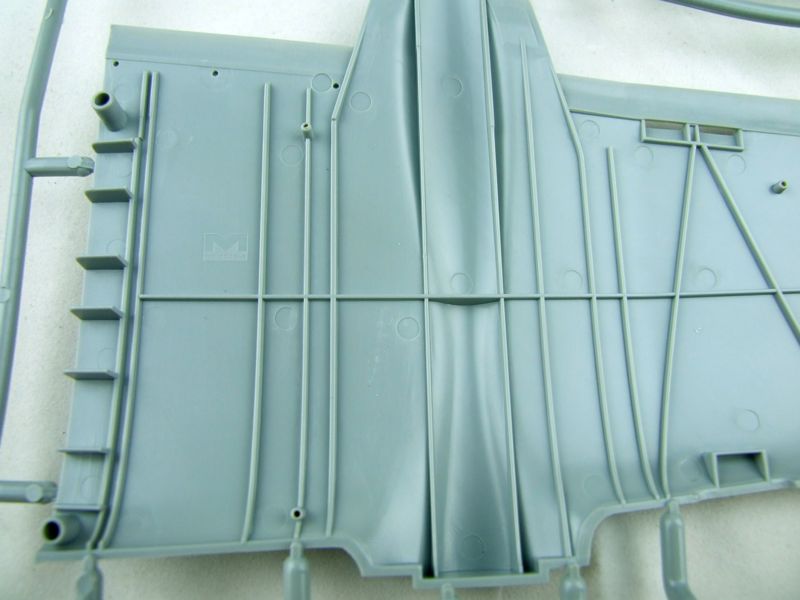 Note the small HK Models logo moulded into the inner surface of the wing; this logo is present on many of the major parts.

The detail on the landing gear and wheel hubs is especially nice: 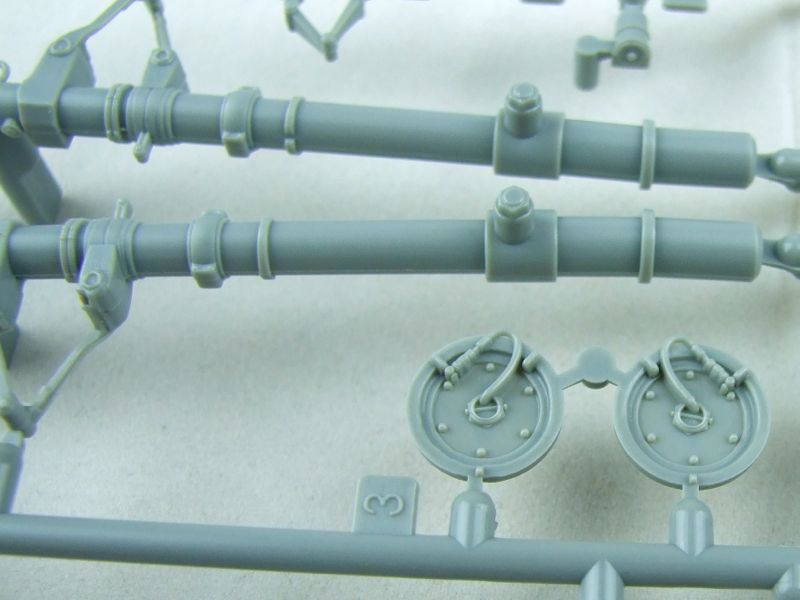 Even more impressive is the detail moulded into the gun breeches: 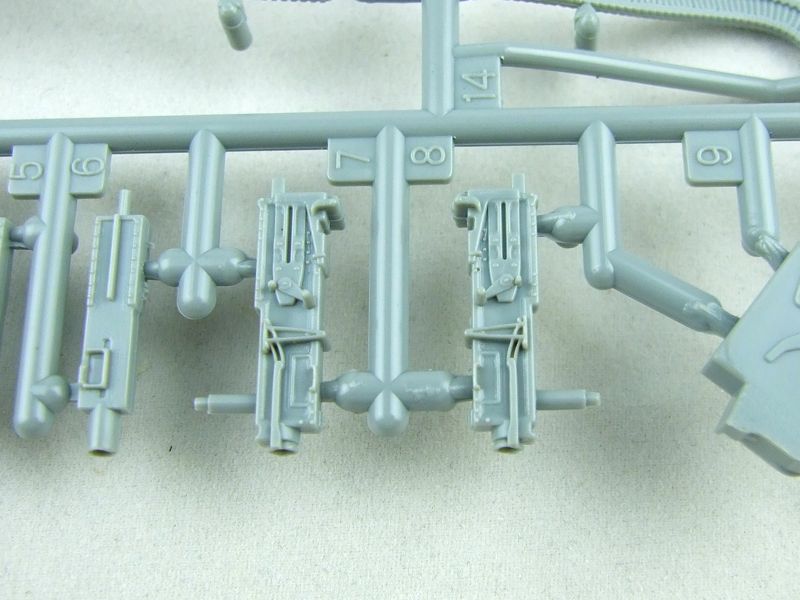 The clear parts are split across 2 separate sprues, with the cockpit canopy and top decking on its own sprue. The second sprue contains the top turret, side windows, rear gunner's glasshouse, and the various lights and lenses. 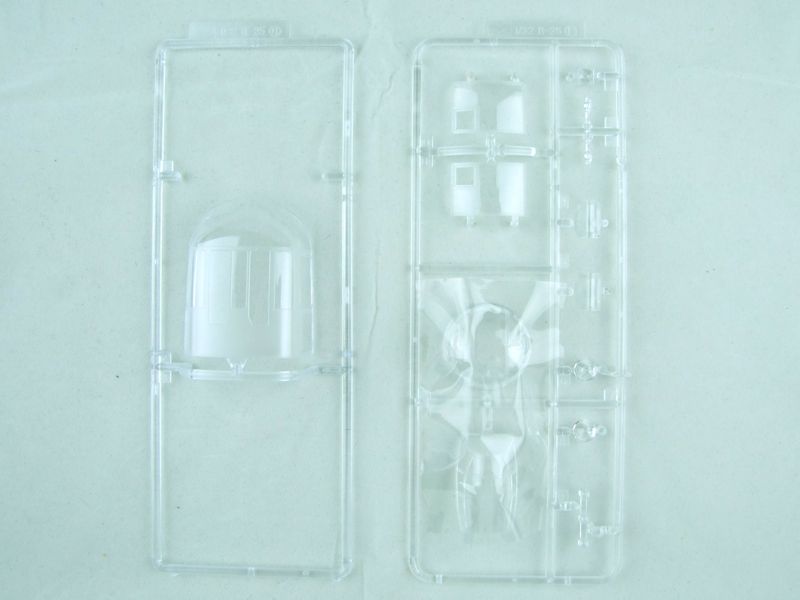 The main clear sprue also features a protective film of clear plastic over the turret and rear glasshouse, to further prevent scratching and other blemishes. A nice touch. 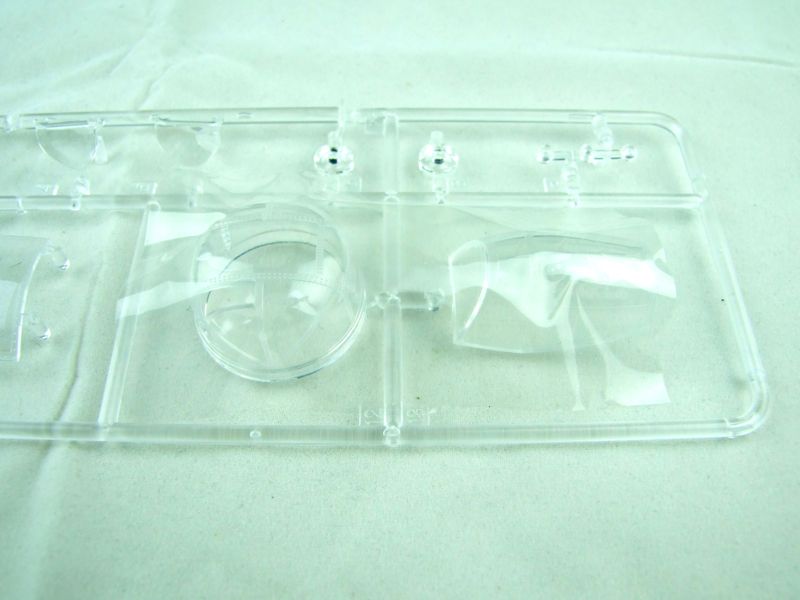 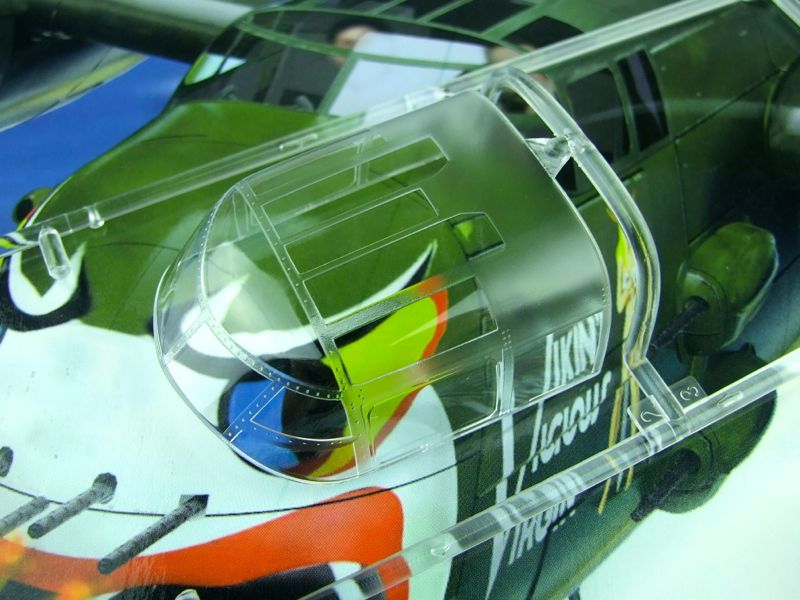 Being a standard injection-moulded kit, the only concession to multimedia parts is a small photo-etched fret containing seat belts, and some other parts that I confess I could not locate in the instructions: 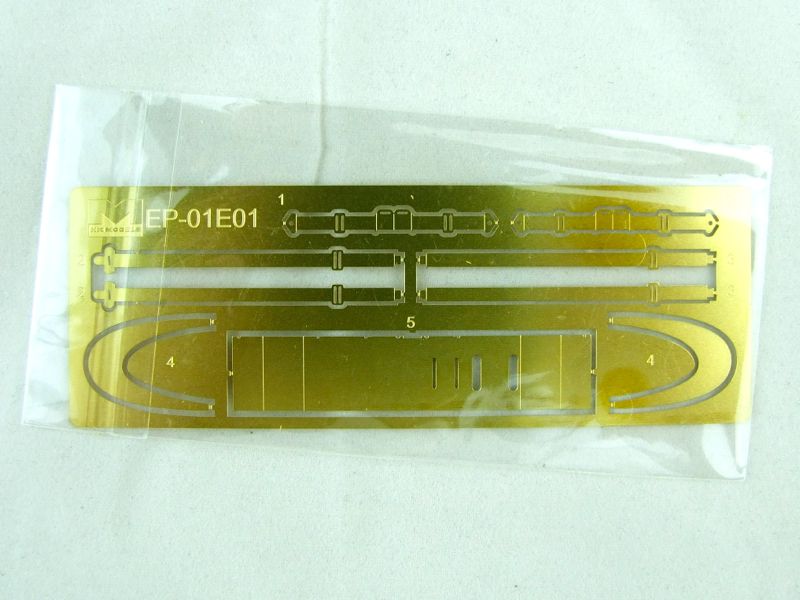 For such a large model, the decal sheet can be best described as modest, containing markings for only a single aircraft, and only a few stencils: 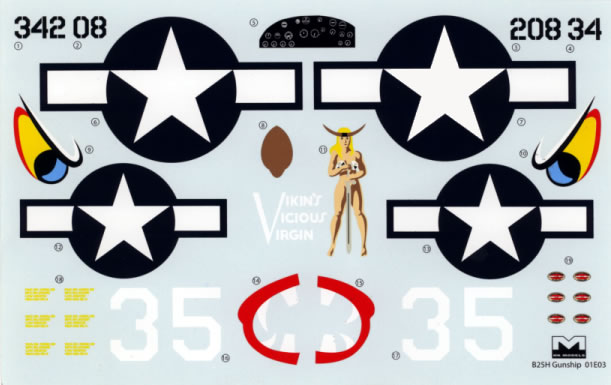 The scheme depicted is "Vikin's Vicious Virgins", an aircraft that flew with the 12th Bomber Group, 82nd Bombardment Squadron in Italy during 1943. The decals provide the eyes and teeth for the nose art, but these need to be laid over white and black components that you will need to paint yourself. This may well provide a tricky masking challenge! I suspect we'll see numerous aftermarket decal sheets and masking sets for this kit in due course however, should you prefer to avoid that challenge, or perhaps don't favour the included scheme.

Print quality seems fine, with good colour density and no obvious registration issues, but they are noticeably thick however. I used the kit decals on my HK Models Meteor build, and didn't have any problems with them.

The instructions had not gone to print when my review sample was shipped out, so a laser-printed version has been supplied in its place. This consists of 16 corner-stapled A4 sheets, but I believe the contents are largely representative of the production version. 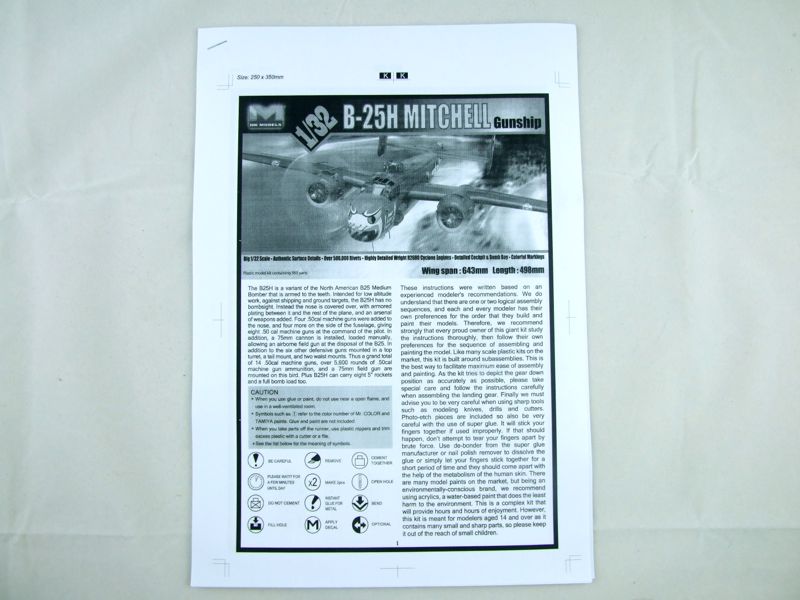 The style is the familiar sequence of exploded assembly diagrams, annotated with colour call-outs and directions: 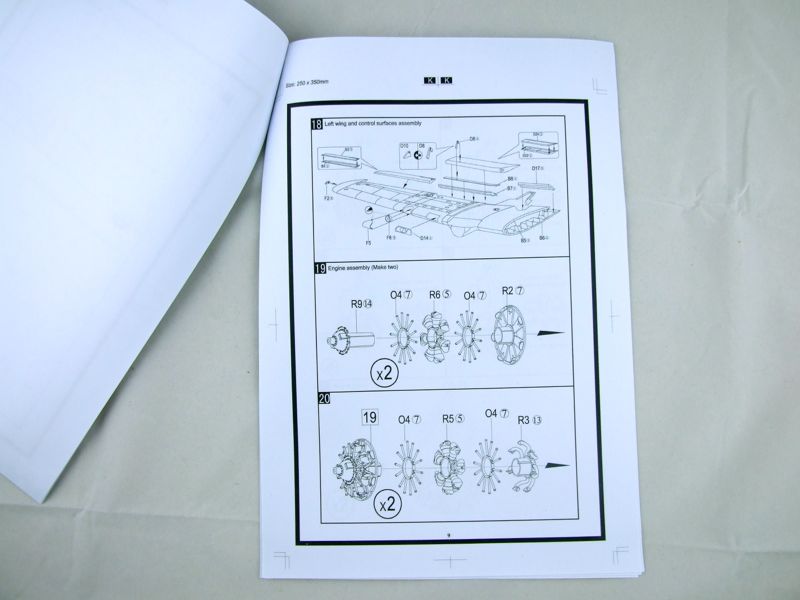 This is a tremendous kit, with a good level of detail that still leaves room for the aftermarket guys. The surface detail is superb, as is the moulding quality, which is crisp and free of flash and other moulding flaws. The decal sheet is a particular weak point, but this should be easily solved by the aftermarket, which is sure to provide plenty of alternatives.

HK Models is to be congratulated not only for tackling such a large and potentially risky project, but also for doing such a fine job on it. Highly recommended!