The BMW 109-003 is jet engine (powering for example the Heinkel 162). The one in the museum differs in a number of details from other engines like the one from the Heinkel 162 in Paris (there are a lot of detailed photos from its restoration). One notable difference is that the Paris engine has its many pipes and lines coloured in standard German colors (e.g. yellow for electrical wiring, red for oil, blue for hydraulics?) while the engine in the museum lacks most of these (except for the electrical wiring which has turned a rather drab yellow by now).

Photo 1 (above) starts off with a partial view of the starboard side of the engine. The white rectangle in the mid-foreground is my notepad that I put there as a scale indicator (width 10.2, height 15 centimetres). I put it there as I frequently have problems in establishing dimensions in reference photos. Photos 2 through 4 (above) walk back along the engine, while 5 (above) shows the back at a different angle. First the major units of the engine (from right to left):

Now for the details, again going from right to left:

Moving to the other side of the engine (which isn’t as accessible), we get photo 6 (above). There is a unit just behind the inlet cone (like a ring with two outlets). I presume this is part of the oil cooler system. Inside the inlet cone (photo 7, above) there are holes/inlets to draw air into this unit.

Photos 8 through 11 (above) show details on this side of the engine. Photo 8 has the top of the oil tank and the pipe coming into its top. Photo 9 follows this pipe further down. Photo 10 is actually in between 8 and 9 (see can still see the pipe) and in the center you can see the location where the hydraulics pump is on the Paris engine but here is just a cover plate (the lighter grey square)? Further right, behind it is the fuel regulator which is the very complex unit in bare metal. The yellow cable is electrical wiring. It is connected to the big connector on the plate. I think this where the wiring coming up from the fuselage plugs in (none of the reference photos ever show a cable connected there so I can’t be sure). Photo 11 moves further back along the engine. In the center is an electrical connection box. The bare grey circle is the tip of the nozzle adjustment bar. 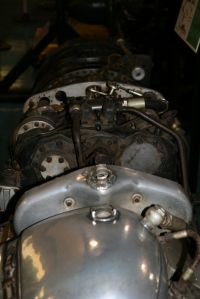 The next set of photos shows things more from the top/front. Photo 12 (above) is a bit of an overview, with the oil tank up front (filler plug in the center), then the Riedel engine tank, the ‘ridge’ with the auxiliaries and the plate with the connections. Photo 13 (above) shows the oil and Riedel-engine tank in more detail (the plug of the Riedel-engine tank is missing), while photo 14 (above) is at a slight angle and shows the pipes going into the oil tank. Photo 15 (above) shows the ridge with the accessories from the front/side. Photos 16 and 17 (above) also show the accessories, now from the other front/side. I have no idea what the two units are (one octagonal, the other the black cylinder sticking out towards the front).

Photos 18 through 21 (above) show the fuel controls. The ‘silver’ rods must be the throttle controls (which also explains the odd shape of the unit with the plates – on the Paris engine this odd-shaped unit seems to serve no purpose but here it clearly is the unit on which the throttle control rods are articulating). Photo 20 shows the fuel pump from the top.

Photos 22 through 24 (above) move further back along the top of the engine. On the right of photo 22 is the throttle rod sticking through the connector plate. There clearly is a part missing behind it, presumably the connection to the throttle in the fuselage. Behind, in the center of the photo is the electrical connection box. The cylindrical black part with a threaded top in center-right of photo 23 is one of the hoisting points (there is another further towards you but out of sight in this photo). The ‘silver’ cylinder on the left is again the tip of the nozzle adjustment rod. Photos 24 through show this from different angles. From the electrical wiring going in it looks like it was driven by an electrical motor. Photo 25 (above) is a bit odd as it shows mostly floor behind the engine but I had to lift my camera up high for this angle so I was shooting blind.

Photo 27 (above) shows the connector plate, also from up high to show the details on the other side. 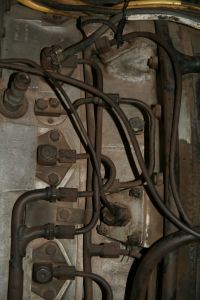 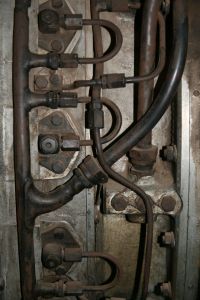 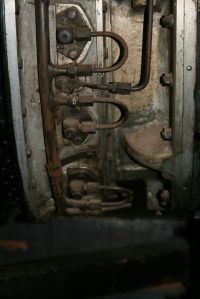 Photos 28 through 30 (above) show the fuel injection lines, going from up to down. 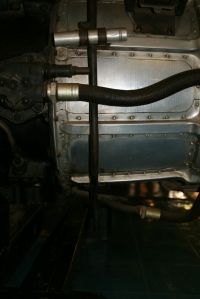 Finally photos 29 through 36 (above) show the oil pump, oil cooler below the engine and the (clamping system of the) oil tank.