PR Mosquito IX LR480 served in Italy (M. Bowman, 1999, Mosquito Photo-reconnaissance units of World War 2, Osprey) with 60 Sq SAAF. It was used for an attempted record-breaking flight from Cairo to Pretoria but was damaged in Rhodesia. The aircraft is high up but with a staircase leading up to the nose. The entry hatch is hanging open, giving some view to the inside.

Paint is mostly a rather pale blue (much paler than PRU blue), silver tail (rudder, tail but not fin and horizontal stabilizers and elevators), silver lower part of engine nacelles, red spinners. The paint is obviously old as it is peeling places but unknown if this is the original paint.

The flat window in the nose is no longer transparent but the surrounding Perspex is (though it is starting to fog a little). Flash photographs through the Perspex nose suffer from reflection but have been manipulated a bit to give a better view of the inside. Very likely the cockpit is not wholly complete (especially the observer position seems a bit bare) but still a lot of detail is preserved (I wish somebody could climb in and take detailed photos from the inside…).

Photo 1 (above) shows a view of the front part of the fuselage from below. You see the Perspex nose with the barely transparent flat window, the open entry hatch and the closed/overpainted camera window in the bomb bay doors. Photo 2 (above) shows the fuselage further back with the other three camera windows (note the mud shield at the front of the 1st and 3rd window). The downward identification lights (photo 3, above) are still amazingly clear after all this time. The hindmost light (closest in the photo) is actually amber but appears almost red here (possibly because of the photo flash). Photo 4 (above) shows the silver-painted tail, with the elevators strongly reflecting the photo flash. Photos 5 and 6 (above) show the starboard wing outboard of the engine nacelle. The aileron trim tab is at a crazy angle. The part extending underneath the wing is for the external fuel tank (its outline is visible underneath the wing). The light is the landing light. Photo 7 (above) shows the port bottom of the aircraft, with the wheel in a support structure.

Photos 8 through 10 (above) show a radiator (identified as a non-standard fuel cooling unit in Aero Detail 23) from various angles. Photo 8 is from the side, 9 from behind, and 10 from bottom front.

Photo 11 (above) shows the crew entry hatch. Note that the ‘Beware of airscrews’ is upside down relative to a more commonly seen situation. Incidentally, what the photo doesn’t make clear but is forcibly brought home to you when you actually see the real thing, is how tiny the hatch is! It is about 60x50 cm which is about the size of a tabloid newspaper folded open. Imagine having to squeeze through that with bulky flying clothing plus parachute and then having to twist around to get into the seat. Also well visible is the hinge structure and the colour of the wood between the fuselage bottom and the cockpit floor. 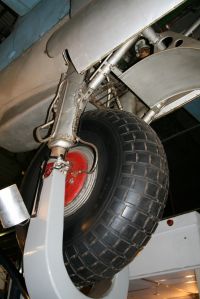 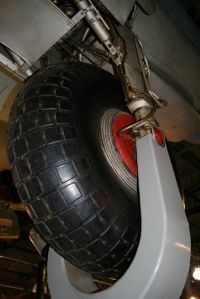 Photos 12 and 13 (above) show the starboard wheel from both sides. With the plain (no spokes) wheel the brake lines go in on both sides.

The final set of photos is also from the inside but now taken through the crew entry hatch. Photo 33 (above) is directly from below. The pilot’s instrument panel is the black part in the centre, port is at the top of the photo. The greyish areas on the left are the windscreen. To the right of that is the roof of the fuselage with various items (several circular ones are probably rheostats, while the elongated black tubes are cockpit lights). The vertical sill alongside the instrument panel is nearly horizontal in the photo. To the right of the instrument panel are lots of cables mounted against the roof of the fuselage. Photo 34 (above) is zoomed in. The somewhat corroded silver bar is connected to one of the rudder pedals (I think the left-hand one). A similar bar is to the right, connected to the other pedal. Photo 35 also shows these bars as well as the bottom of the instrument panel.

Photo 36 (above) shows the first-aid box that is located to the right of the pilot’s seat, the bottom of which you see on the left. The orange handles (out of focus) belong with the throttle quadrant. Photo 37 (above) also shows the box, the bottom of the pilot’s seat and the vacuum control unit (black part, far left). The bar with the knee I am guessing to be the bar (misplaced here) that connects the control column to the elevator controls.