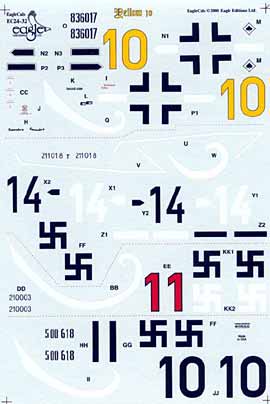 The newest 1/32nd scale decal sheet released from EagleCals is "Yellow 10". The reference for this decal sheet comes from the Eagle Editions book, "Yellow 10", the story of the ultra rare Fw 190D-13. It follows the successful Doras of the Galland Circus combination reviewed here earlier.

The decals are printed by MicroScale and include markings for three Fw 190D-9s and "Yellow 10", a Fw 190D-13. Two sheets of decals are supplied. The first sheet includes all the details for each specific aircraft while the second includes stencils and national insignia. The registration is perfect and the decals appear to be very thin with a minimum of carrier film.

The instructions are extensive and include color profiles for each aircraft. A color topside view is also supplied for the complicated camouflage, which was the final version on "Yellow 10". The three remaining aircraft on the decal sheet have their topside patterns clearly depicted in black and white. Further instructions, which will be very helpful to the modeller, explain the external differences between the D-9 and the D-13. Line drawings are also supplied, showing the placement of all stencils. The package is complete with elaborate references which explain the smallest details for each aircraft.

Eagle Editions decals are highly researched and represent good value for their cost. Any modeller with a passing interest in late war German aircraft should have this item in their reference library. I highly recommend this decal sheet and rate it with five out of five stars.