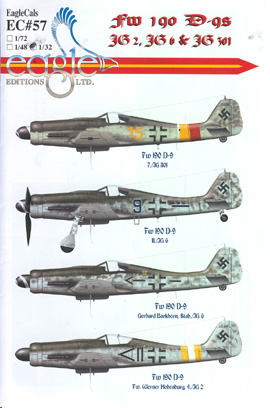 The instructions printed by Eagle Editions are always a welcome addition to the decals as they are very comprehensive. Tom Tullis continues with his colorful profiles. Photos of the subject aircraft and proper stencil locations complete the instructions.

Each aircraft is clearly detailed with a combination of text and photos for each of the subject aircraft. The first aircraft to be detailed is "Yellow 15" from 7./JG 301. New photographs, printed with the instructions, have allowed for an updated interpretation of this scheme. This Dora 9 is finished in an RLM 81/83 scheme. Though not specified in the instructions, the upper wing camouflage is RLM 75/83.

"Blue 9" was assigned to II./JG 6. This aircraft is finished in an RLM 75/81/83 upper surface. The undersides are RLM 76. Useful photos of the aircraft are printed with the instructions to aid modelers wishing to draw their own conclusions and further study this aircraft.

The third Fw 190D-9 is named "Christl". This is the famous Dora flown by leading German ace Major Gerhard Barkhorn of Stab./JG 6. The aircraft is finished RLM 75/82/83. Modelers should note that the aircraft is depicted without Red/White/Red RV bands that have been commonly associated with this scheme in the past. The instructions further detail this issue.

The final scheme is "< 2 vertical bars". This aircraft, flown by Fw. Werner Hohenburg of 4./JG 2, was assigned to Stab./JG 2. It crashed during Operation Bodenplatte on January 1, 1945. This is an early variant with the five-piece gun cowling and flat canopy. The aircraft is finished RLM 75/76/83 and is marked with the colorful Yellow/White/Yellow RV bands of JG 2. 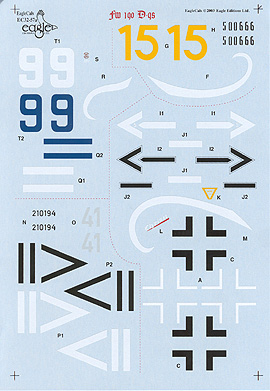 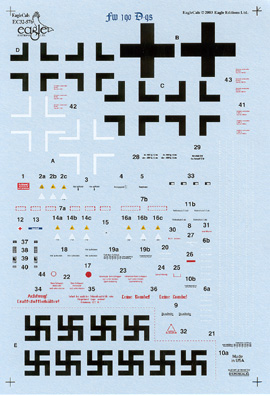 Microscale prints the decals for Eagle Editions. They are printed over two pages. Stencils are included with prop logos printed on an additional small piece of paper (not shown in scans). The quality appears to be up to the high standards attainable by Microscale. The decals are very thin and each is printed in perfect register. Carrier film is at a minimum and I would expect no difficulty applying these markings.

I consider the decals from Eagle Editions to be among the best in the marketplace. Their accuracy and attention to detail is quite evident with each release. New schemes are continually being released that will leave the modeler wanting more. Due to the popularity of the subject matter, I am sure that these decals will sell fast. I recommend them without hesitation to anyone interested in the Fw 190D-9 or the study of late war German camouflage.