Good things come to those who wait... 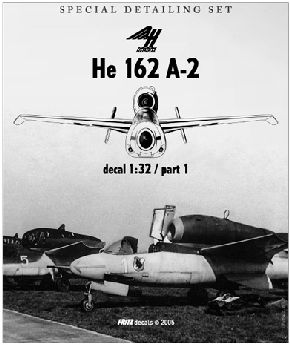 Fritz decals certainly werent the first horse to the pond on this subject but they are the first ones to get it right. Not wanting to cast aspersions over any one else's hard work, it is definitely obvious from first glance that these have correct coloured arrows with the correct shape to the heads. That is reason enough on its own to purchase the sheet, but the quality doesn't stop there.

With seven separate aircraft to choose from the variety of choice is above the average three or four from a normal decal sheet and therefore can be commended and the level of research that went into each aircraft is apparent. While some are the more well known examples of this airplane, there are a couple of lesser knowns but as I mentioned earlier the shape of the arrow heads are reason enough to buy the sheet.

The decals themselves look to be of the highest quality and the fact that they say "printed by Cartograph" on them is assurance enough for me. If you have ever used Cartographs decals before you will know what I mean.

The first thing to jump out at me ( aside from the arrow heads of course ) was the instrument panel decal. It will be difficult for you to see it in the image attached to this preview, but trust me it is superb. 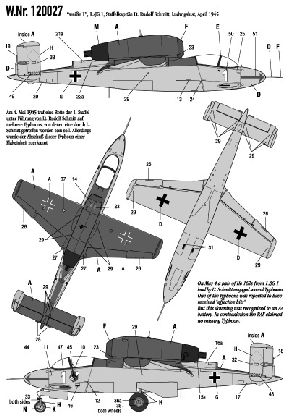 An intersting story accompanies this profile as Lt. Schmitt claimed to have damaged one Typhoon on May 4th, the credit went to an AA battery, yet the RAF never acknowledged any missing aircraft. 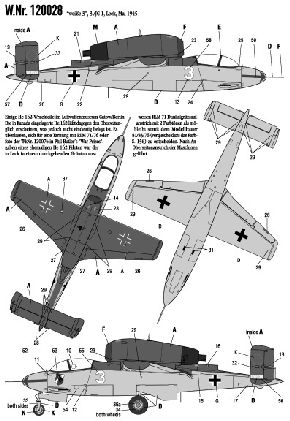 Aircraft 2:"White 3" JG1, Leck, May 1945 there isn't a great deal of specific information printed in the instructions regarding this particular aircraft, although the German text accompanying it explains the likelihood of a single tone upper camouflage scheme. 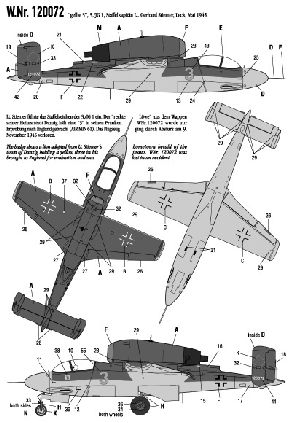 After this aircraft was brought to England for evaluation following the war, it ws lost in an accident killing the pilot who flew it. In it's German guise it was adorned with an emblem comprising the shield of Danzig, Steimers hometown. 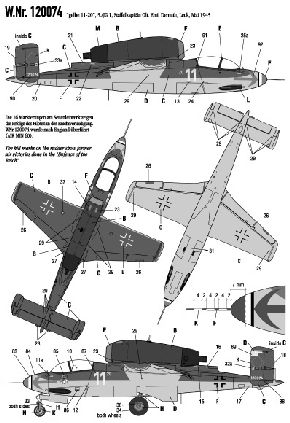 As this aircraft has a colourful nose and different numbering than any other profile on the sheet it stands out. It is one of my favourite profiles even if there is some controversy surrounding it. I have heard different explanations of the numbering , some saying it should be white 11-20 and even white 11- yellow 20 but I think Yellow 20 makes the most sense and to my eye, looking at the pictures in both the old profiles book as well as the X-planes 162 book from Schiffer the tones look yellow to me. 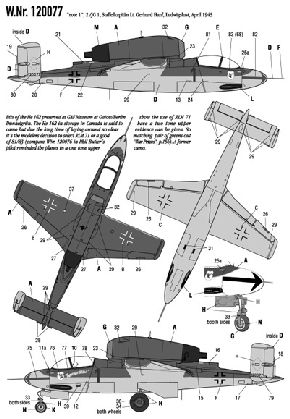 No explanation here merely a translation of the German description or explanation rather, of the upper colouring confusion surrounding He-162's. Having a close look at the photographs I have access to I tend to agree with the former pilot cited here who remembers a single tone upper camouflage. 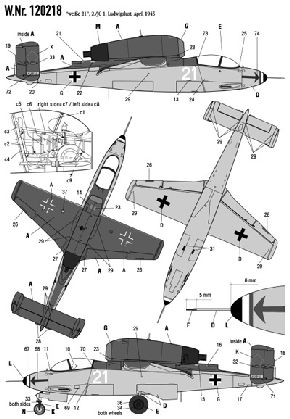 While there is no explination or history with this aircraft as information must be scarce on it, it was here that I realised that there is senciling included for the interior of the cockpit. Nice touch. 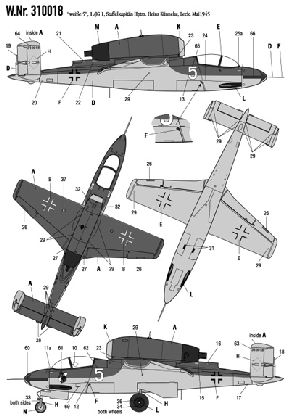 As with AC/6 information is brief with regards to this airplane, yet as with all of the other profiles information regarding decal placement is clear and thorough. 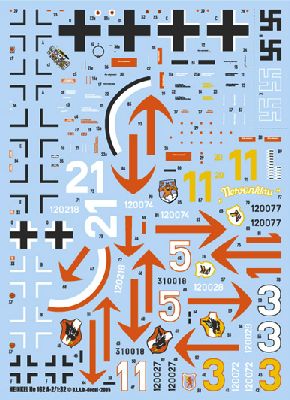 Try as I may to come up with a negative comment to temper this review and satisfy the cynics, the best I can come up with is the fact that the decal sheet itself is very crowded. Which when you think about it is a good thing...

All of the profiles are clearly illustrated the decal placement instructions thorough, and the layout of the profiles excellent. A lot of stencilling which has been left off of other decal releases on this subject have been included and the attention to detail is to be commended. I was also particularly impressed with the complete painting instructions, offering the full breadth of colours down to the landing gear.

At the risk of sounding repetitive I give this decal release a glowing endorsement and if you plan on building a Salamander this sheet will be very useful.

Many thanks to Nigel at Hannants for the review sample.