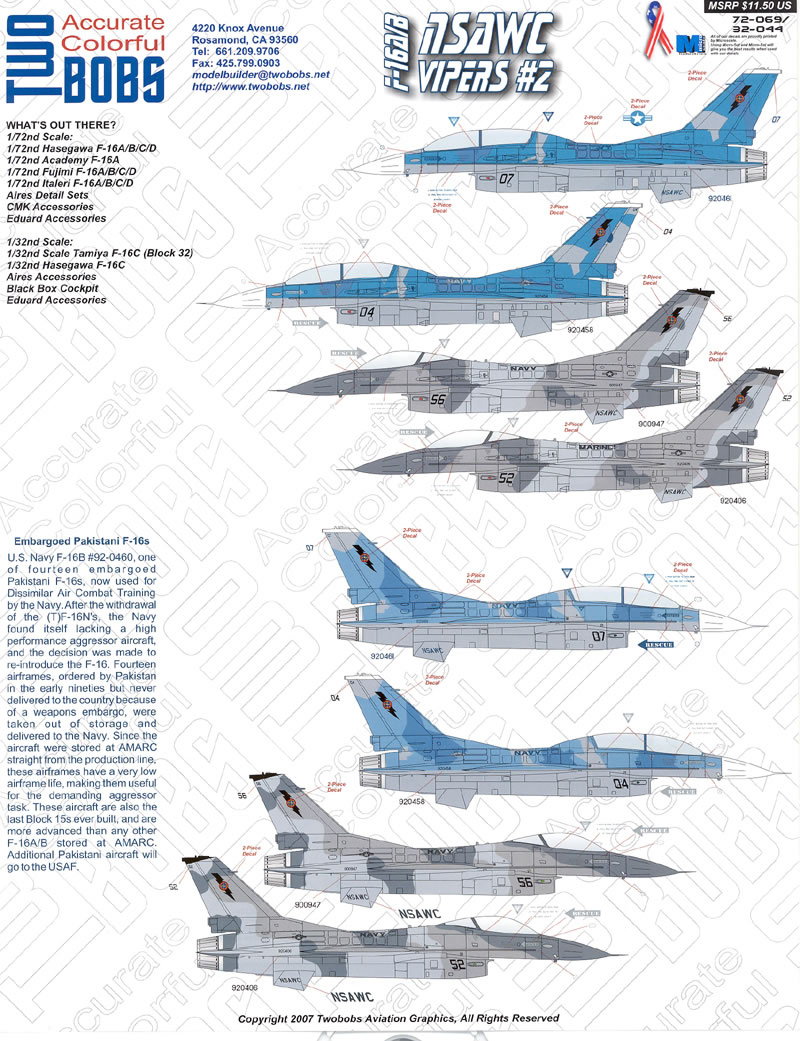 Twobobs Aviation Graphics have released new markings in 1/32nd scale for the F-16A/B Vipers of the Naval Strike and Air Warfare Center. Though not of interest to our LSP readers, 1/72nd scale markings are also included composing sheet 72-069. 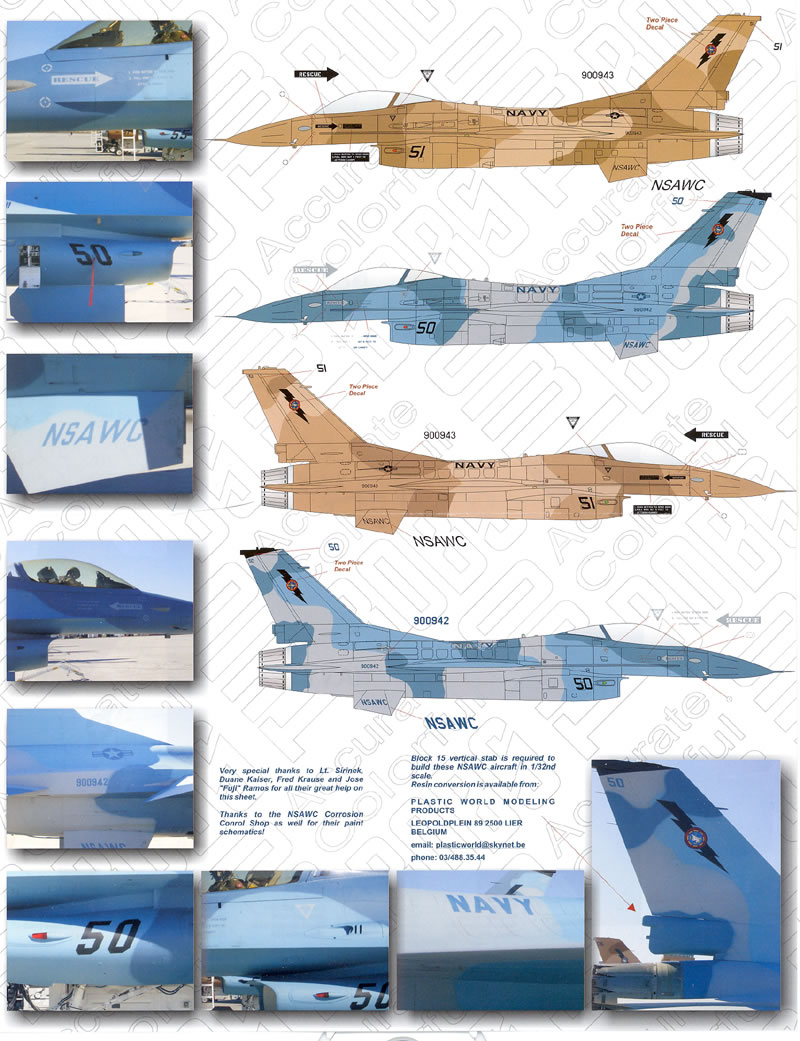 Two types of Vipers are provided. The instruction sheet depicts single and two seat variants. As there is no two seat F-16B in 1/32nd scale at this time, Twobobs provide additional markings in 1/32nd scale to provide value for your dollar. For the rest of this review, we will concentrate on the 1/32nd scale F-16A options only.

Fourteen Vipers were originally destined for shipment to Pakistan and instead went straight into storage at AMARC. They are low time airframes ideally suited for the rigors of Dissimilar Air Combat Tactics (DACT). Twobobs have opted to provide markings for four aircraft from this select group: 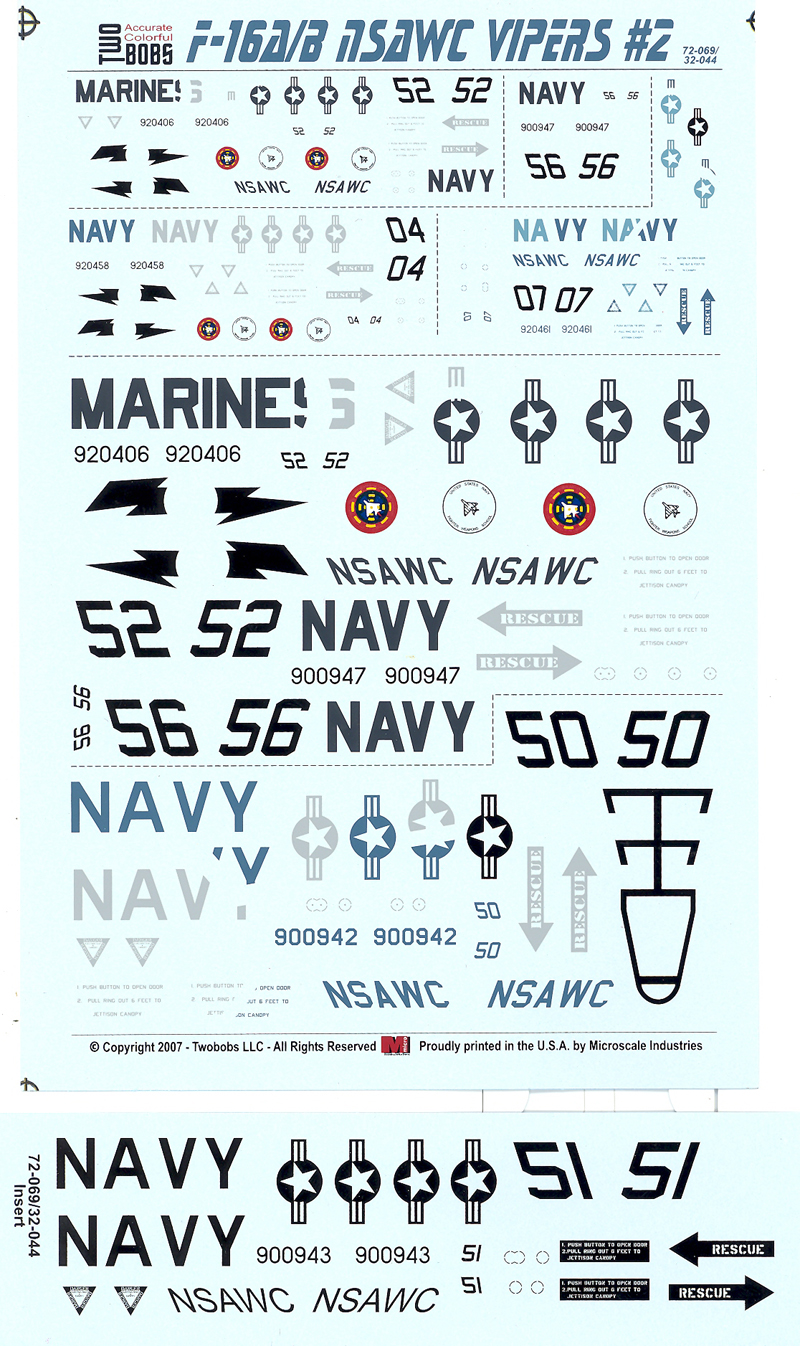 Twobobs suggest the Tamiya F-16C (Block 32) or Hasegawa F-16C as the basis for the kit. These four 1/32nd scale aircraft are embargoed Pakistani F-16 Block 15 series aircraft. As such, the earlier resin vertical stab from Plastic World Modeling Products would be essential to accurately depict these aircraft.

The instruction sheet follows the traditional Twobobs format. Remember to disregard the F-16B schemes, as they are limited to 1/72nd scale only. You are provided with all necessary views printed in color. Complete painting details are included cross-referenced to FS numbers. Supporting data in the form of nine thumbnail photos are also included.

The decals are printed by Microscale Industries over two pages. They are in perfect register and appear very thin with minimal carrier film. I anticipate no problem in applying them.

Any modeler with an interest in the F-16 Viper or Aggressor schemes will appreciate these new markings. I am sure they will prove to be very popular and I recommend them without hesitation.