Twobobs Aviation Graphics has released a new 1/32nd scale decal sheet for the F-16Cs of the 144th FW based at Fresno, California. 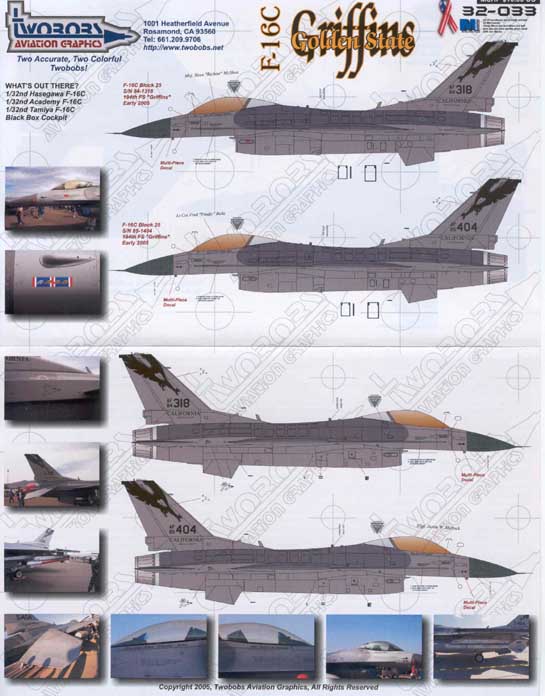 Two aircraft with large stylized falcons on the tail are included. Both aircraft are Block 25 series from the 194th FS “Griffins”:

The instructions suggest kits from Hasegawa, Academy and Tamiya are suitable. Each of these manufacturers supplies different Block F-16s. I suggest checking references closely as some aftermarket parts may also be needed to correctly represent Block 25 aircraft. Profiles are provided for left, right, top and lower views. FS 595b color references are provided. Also included are ten small thumbnail images of these two aircraft. Colors are cross-referenced to Testors, Humbrol, Gunze Sangyo and Xtracrylics paint lines. Also included are extensive notes on the history of the 144th FW, from its inception in 1948 to their current role with the F-16.

The decals are printed by Microscale Industries. Decals are provided to complete a single aircraft of the modelers choosing. They are printed on a single page and quality is superb. Carrier film is minimal with good color density. Given the Microscale reputation, I’m confident no problems will be encountered when applying these markings.

The F-16C plays an important role with Air National Guard units where it sees widespread service. The 194th FS displays some very striking markings on the tail of their F-16Cs and is sure to be popular with modelers.