Twobobs Aviation Graphics has just re-released their first 1/32nd scale decal sheet for the F-16Cs of the 414th CTS based at Nellis AFB in Nevada. 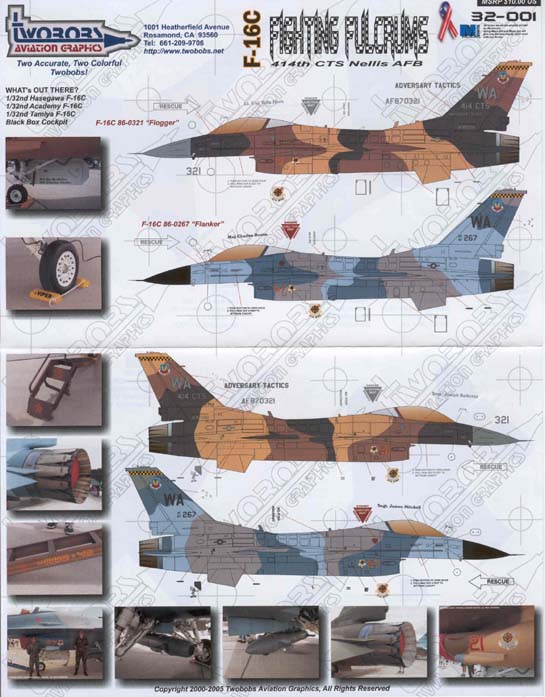 When the initial decal sheet was released in 2000, the only 1/32nd scale kit worth considering was the Hasegawa release. Now, modelers have a larger selection of available kits with the release of the Tamiya and Academy kits. Modelers should study references carefully when determining which kit they use as some modifications may be required.

The instructions are very similar to their earlier release. Ten thumbnail images are included; whereas the original instruction sheet included eight small images The same two subject aircraft are included:

Profile views are provided for left, right, top and lower sides. FS 595b color references are provided. Colors are cross-referenced to Testors, Gunze Sangyo, Xtracrylics and Xtracolor paint lines. Modelers should note that some of these shades are unavailable. Many of the colors applied to these Aggressors are custom mixed by local paint manufacturers based on specification provided. The new instructions do not provide some of the notes about these schemes that were provided with their 2000 release.

The decals are printed by Microscale Industries. Decals are provided to complete both aircraft. They are printed on a single page and quality is superb. Carrier film is minimal with good color density. Given the Microscale reputation, I’m confident no problems will be encountered when applying these markings.

Aggressor schemes are always popular with modelers. They provide some interesting schemes and colorful alternatives to current lo-viz aircraft. This re-release should be a welcome addition to anyone that didn’t purchase these markings when they were first released.