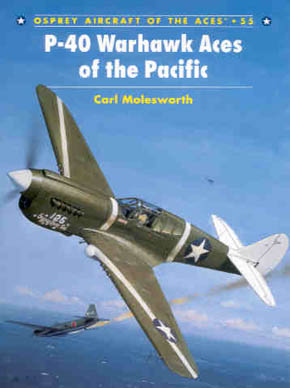 The back cover of Osprey's Aircraft of the Aces book proclaims that the series is the best selling collection of specialist aviation publications in recent years with over 350,000 copies sold. A claim that is quite easy to believe based on an ever-expanding range and diversity of titles.

Characterised by the evocative cover artwork of artist Ian Wyllie, Osprey started with a high standard of illustration, historical research and above all an informative and very readable narrative back in 1994 with 'P-51 Mustang Aces of the Eighth Air Force' by Jerry Scutts. Ten years and over 60 titles later see no sign of Osprey's flagship series slowing down.

This recent title which was first published in 2003, deals with P-40 Aces of the Pacific theatre and starts logically with the events of December 7th 1941.

The P-40's battle debut was less than auspicious and the Warhawk started out with a reputation tarnished by events that were not of its own doing. However, future air fighting 'legends' including Frances Gabreski and George Welch put up a spirited if not a little belated defence against the carrier strike force of Mitsuo Fuchida.

This title differs little from its predecessors and follows the successful format of combining a historical timeline narrative supported by first class illustrations and period photographs. In this case some of the photos are not of the best quality but I suspect that this is a result of the theatre of war covered and the sources from personal archives, which have survived for over 60 years.

In fact deciphering old photos of indistinct detail adds to the fun of researching a particular aircraft.
As is often the case the job is made that much easier by the inclusion of high quality profile artwork. Jim Laurier is perhaps better known for his aviation art and his paintings have a quality and accuracy that places him alongside Robert Taylor and Nicholas Trudgian, with a skill of being able to convincingly portray combat aircraft in their natural environment.

The profiles in this edition break with Jim's preferred medium of oils and are, I believe, Mac computer generated. Here's a link to more info on Jim and his work for Osprey: http://www.ospreypublishing.com/author_detail.php?author=A2290.

Mark Styling provides further modelling references, with some excellent 72nd scale drawings. Mark also has a prolific catalogue of Osprey titles he has contributed to including Mac generated profiles as well as his scale drawings.

Although no reference to accuracy can be stated here, they do add to existing drawings and can only expand the modeller's perception of what an accurate Warhawk model should look like. You can never have enough reference material…. as they say…

Moving away from the direct review of the title for a moment to personal opinion; I feel that the book was let down by the size of the photos and whilst the format is such that it doesn't allow large single spread images, a few larger clearer shots would have been welcome to me as a modeller. This is a feature of many titles in this series.

A further comment on the tonal values of the profiles is that they appear dark. This might be a feature of the colour process or maybe even my copy and replicating true colour values in print could be an issue here, but in view of the subject matter and the fact that many of these aircraft would have suffered from fading due to high UV levels, then the uniformity of the profiles whilst of a superb quality, does become a bit wearing. Nevertheless the detail included is incredible and the 250x180mm format of the book just doesn't do them justice! Hopefully a collection of these artists' profiles will appear in large format in the future.

This is Carl Molesworth's third title on a theme of the P-40 and he has specialised in researching USAAF units of the China-Burma-India campaign, interviewing veterans from these little publicised theatres.

Moving through the history of the Pacific air war for land based operations, the author competently deals with chapters on the Dutch East Indies and the attacks on Darwin and mainland Australia and follows the turn of the tide with New Guinea, Guadalcanal and the Solomon Islands ending up with a vivid account of the forgotten war in the foul weather of the Aleutian chain. Surely the most loathed posting any USAAF pilot could wish for.

With the recent large-scale popularity of Curtiss' underdog in the shape of the 'much-discussed' Trumpeter P-40B and the promise of more to come in even larger scales, this title might just prove invaluable for reference and inspiration.

The majority of the colour profiles focus on the E and N variants with a handful of K's and a single B in the shape of Welch's 47th Pursuit Squadron machine thrown in (the reason I bought the book!); but all are colourful renditions on a theme, proving that there's more to a Warhawk than a sharkmouth and a flying tiger!