At the time of writing this title is Osprey Publishing’s most recent in the prolific Aircraft of the Aces series. Why it has taken a previous 64 titles to get around to covering the awesome Bristol Beaufighter is anyone’s guess, but this title is a welcome addition to a subject which is relatively sparsely covered in print. 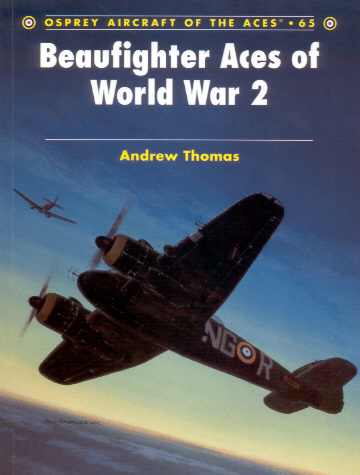 The format follows the standard Aircraft of the Aces content describing the Beaufighter’s operational career at the hands of the aircrew that flew and fought in the type. Interspersed with anecdotes and operational activity are chapters which cover the Beau’s progression from early nocturnal hunting in the night skies over the Home Counties to the Burma coast where its last victim, a Nakajima Oscar met its end.

You might be forgiven for assuming that the Beaufighter wasn’t really a fighter aces mount and that its forte was anti shipping and ground attack, but the fact that over 120 aces made air combat claims lends some credibility to the type’s potency as a hunter. Perhaps its major successes lay in the nightfighting role and this is covered in some detail, with some rare images of the stop gap MkII and the obscure Mk V Merlin engined variant. The Mk V is noted for its typically British modification of mounting a four gun Boulton and Paul Defiant turret directly behind the cockpit.

The quality of the photographic images reflect their vintage but then this aircraft was never as photogenic as a Spitfire and it must be difficult to source both unpublished and high resolution images, with the majority here coming from personal collections.

John Weal’s profiles are fine renditions of individual aircraft and although his style precludes weathering and effects; they do portray the aircraft accurately with a selection of diverse schemes amongst the thirty profiles. John has been illustrating aviation subjects since well before this reviewer was a boy and indeed his work is long regarded by many as a benchmark for quality. He is also author of seven previous Osprey AotA titles. 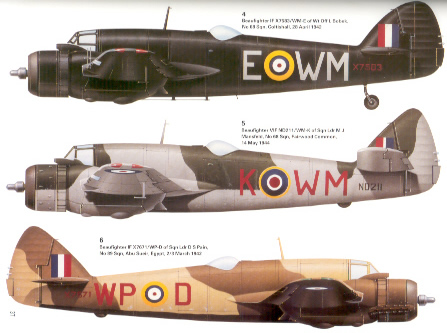 Mark Postlethwaite is a member of the Guild of Aviation Artists and by comparison a relative newcomer although he is widely published in the aviation fine art world. His cover art not only captures the essence of Cunningham and Rawnsley’s twilight intercept on an unsuspecting Heinkel but carries on the superb graphic representation established by Ian Wylie’s cover artworks for Osprey.

It's hard to criticise this book but if anything can be levelled it’s the size of the photo’s which continue to be a bugbear of the series, obviously the constraints of the format and possibly the original negative size play a major part in reproducing what to many modellers is the main reason for buying these titles. As with all of these series the standard of artwork is exemplary and the information provides inspiration for that next modelling project. From a large scale modelling viewpoint there is only likely to ever be one Beau, the Revell MkI and although it’s now long in the tooth, it’s still widely available.

The possibilities and inspiration for modellers to produce something different from Andrew Thomas’s book are there from the night skies over the Channel through the intense air battles for Malta to the last days with the RAAF over Burma.

If you collect these titles than you’ll need no other excuse other than to keep your collection up to date and if you’ve an interest in the mighty Beau, then this title is certainly worth the cover price to add to your references.