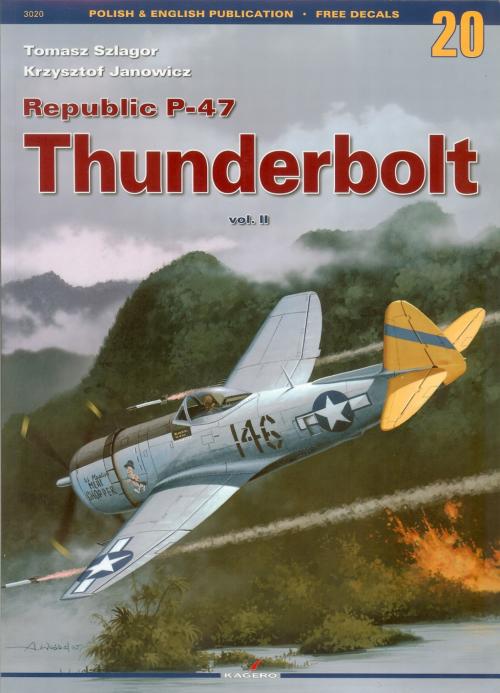 This is the second in a series of four monographs on the Republic P-47 by Kagero. In typical fashion, we are treated to an exciting narrative in the first few pages. These continue to spike my interest and the story of the ‘ace in a day’, Lt Perdomo was no exception. Instead of beginning with a focus on the ETO, this volume concentrates on the use of the P-47 against the Japanese. It covers the period from initial deployment (some great aircraft carrier take offs pictures) right through to the A-bombs.

A small section of text continues regarding P-47 development. The emphasis being on the addition of the famous ‘bubbletop’ canopy to the new aircraft. Other tweaks for D series P-47s are discussed including additional fuel, taming the high dive speeds with recovery flaps, stabilizing dorsal fin and the K14 ‘acemaker’ gun sight. The section continues with discussion of new P-47s in the N and M models. There is some brief discussion on the various prototypes developed from the earlier P-47 B models. The XP-47E, the XP-47F. Other experimental P-47s mentioned include the XP-47H’s, XP-47J, XP-47K and XP-47L. The successors to the P-47D, the M and N models are discussed in quite a degree of detail along with the penultimate experimental P47... the XP-72.

The narrative switches characteristically to combat orientated information. Less technical but none the less entertaining, we are drawn into the world of the P-47 over the pacific. Summaries of combat abound and we are treated to a detailed description of the action that earned the young Lt Col Neel Kearby his Congressional Medal of Honor.

Following this, there are quite a few pages devoted to the 318th and 348th FGs and their exploits in combat in the pacific. Interspersed are smaller text blocks on other P-47 FGs including the 35th and 58th FG. There is a spectacular story of bravery and aggression with Lt Jack Payne’s P-47N 'Icky & Me' which describes attacking a range of ground targets in spectacular fashion, culminating in the witnessing of the Nagasaki atomic bomb. The awesome firepower, ruggedness and reliability of the P-47 are described in detail and give the reader a healthy appreciation for what a competent weapon system the plane truly was.

The book has an unfortunately brief section on the Burma and Chinese area of operations but quickly soon switches back to the ETO where detail abounds. This period covers Europe from January to May 1944 and each page of text is accompanied by some very interesting black and white photographs. It explores recollections and information from the changing environment where the P51 was rapidly becoming the dominant long range escort and the P-47 was increasingly being dedicated to ground attack in flak hostile territory. Nevertheless, the P-47, seemingly the arch-nemesis of the FW190, continues to give a good account of itself in a wide range of mission types including the large deployments during ‘Big Week’. There are descriptions of combat and comments from famous P-47 names like: Gentile, Mahurin, Johnson and Gabreski.

The final pages of text in the book are dedicated to the air war in Italy and the role Thunderbolts played. The Germans prepared a superlative defence of Italy by skillful use of terrain and defence in depth. The ability of the P-47 to target and destroy strong defensive positions became almost irreplaceable in order for allied Armies to achieve breakthroughs and continue their advance. Other roles were found in escort duty with raids on oil refineries. There are many combat reports of the toll the P-47 pilots took on the Luftwaffe.

At the back of the book are 18 pages of simply stunning line drawings. They include: P-47 D25s, D30s, D27s, -40s and Mk Is and IIs . There are also drawings of the P&W 2800-52 Double Wasp engine, instrument panels, ordnance, propeller types and the .50 cal. machine guns. Following this are a number of excellent colour photographs and some super colour profiles, some of which are the subject of the free decal sheet supplied by Techmod. Again, unfortunately only offered in 1/72 and 1/48 but presented for you to view. 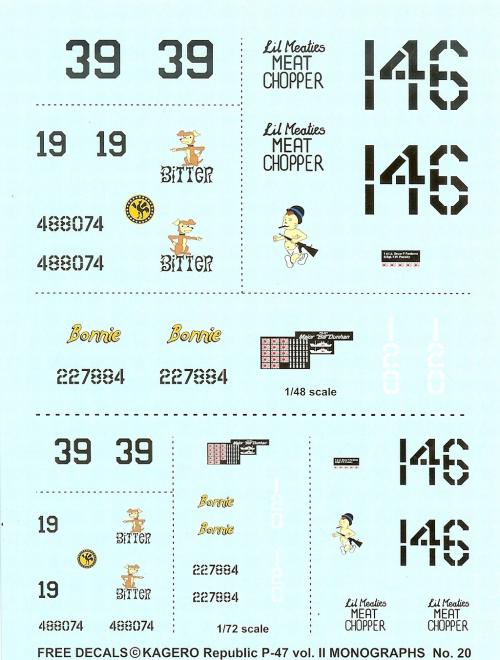 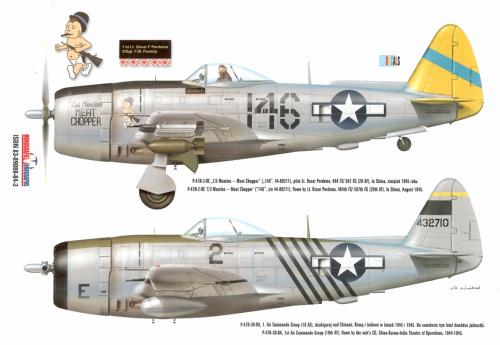 This volume of the four book series was a very easy read. The combat actions are thrilling and really put you in the plane. There is enough technical information and plenty of great photos to glean information from. The line drawings are again superb and the colour profiles will begin to showcase just how colourful and interesting a lot of P-47 squadrons really were. Again, it offers something for everyone, be you a modeler or simply an aviation enthusiast. I’m really enjoying the series and I’m sure you will as well. Stay tuned for two more volumes on the P-47.

Many thanks again to Ian McPherson of Janterpol books for the chance to review this sample.