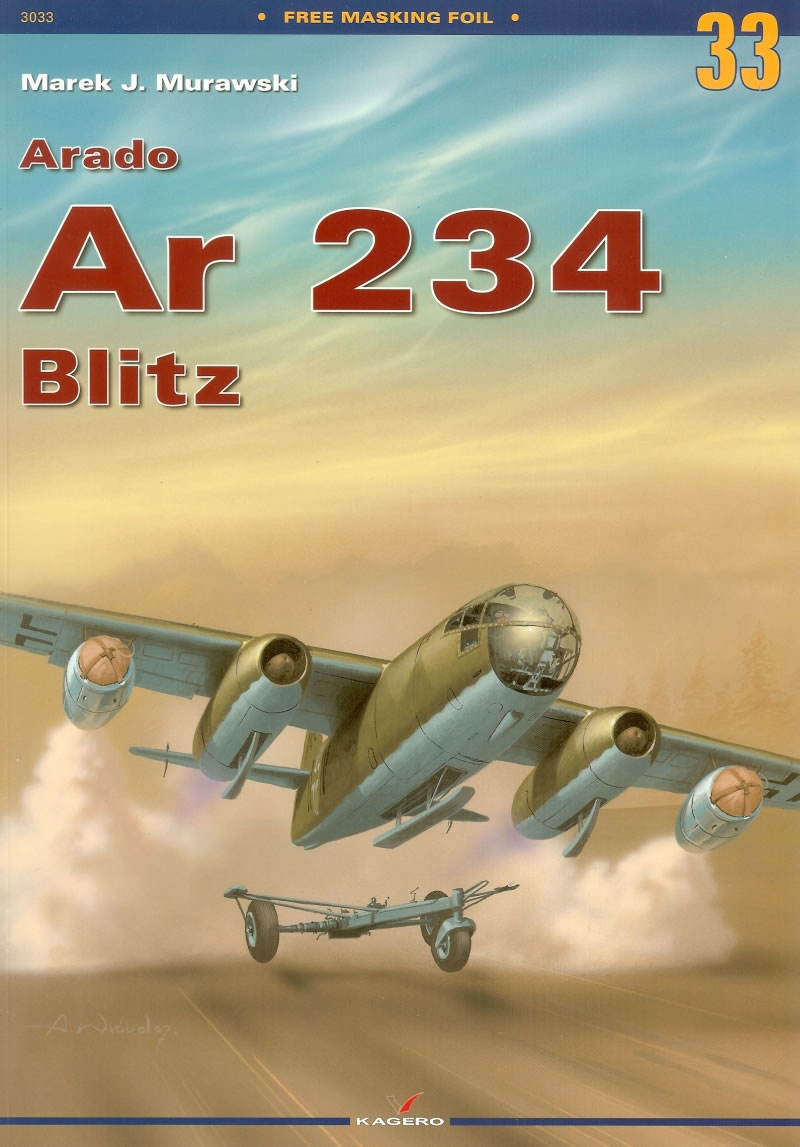 The phenomenal 1/32 Ar 234 kit created by Radu Brinzan/MDC rightly took out honours for the 2008 LSP multimedia kit of the year. If you had planned to build this masterpiece and were prepared to hand over your hard-earned you might also want some good reference material to go along with your build. With that in mind I went hunting for new material.

Kagero released this book in 2007 but it has only recently found its way to Australia. Like most Kagero books this one starts off with the recounting of a mission involving the Ar 234. As usual, it’s an evocative story putting you squarely in the cockpit. When you begin to read on you’re already in the zone for understanding just how technologically advanced this aircraft was for its time. Even though only a few handful of Ar 234s ever saw service some of their combat sorties produced results every bit as amazing as the technology in the plane itself.

As you would expect the book proper begins with a chapter on the design and development of the Ar 234. It recounts the troubles German engineers were having with all early jet engine design but interestingly also some of the politicking involved in getting such a project up and running. There is quite a lot of detail regarding the V1 through to V7 prototypes, including first hand mission reports from the test pilots. 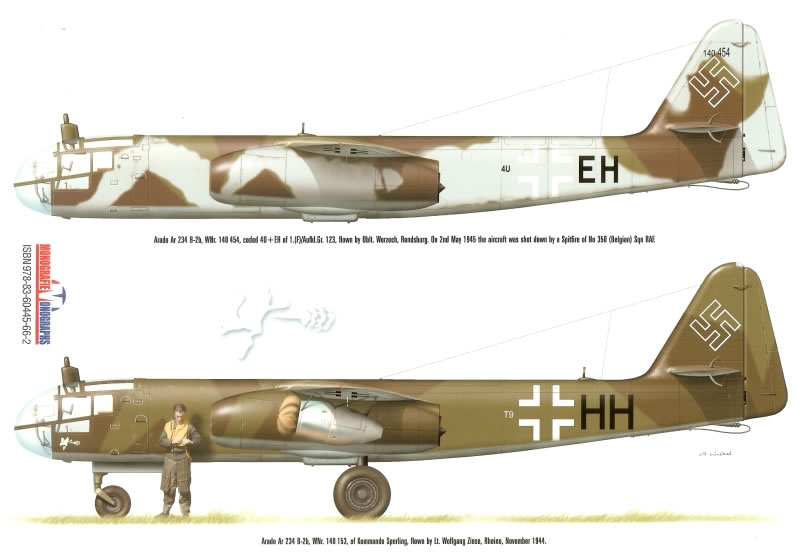 The following chapter focuses on the Ar 234B. Reports on the first prototypes of this series V9 through to V12 are included. The text describes clearly and concisely the differences between the Ar 234 B-1 and the Ar 234B-2. It does this not only through listing but also describing the impact of changes in the technical specifications. Following this the text begins to describe the pre-production variants of S1-S20. There is some good information for the modeler all through these chapters. Werknumbers are included along with fuselage codes. Rustsatz field modifications are listed along with the typical loadouts of the Ar 234 B-2 bomber variant.

The next few chapters are smaller. They include a small chapter on the Ar 234-C and another chapter on ‘other variants’ of the Ar234. The development of this type, personal sortie reports and great photos make both of these chapters easy but informative reading.

The last chapters are on the Ar 234’s operation service firstly in recon units and secondly in bomber units. Both chapters are easily read and have plenty of good photos for perusal. The main text book finishes with those two chapters.

Following those chapters are 24 pages of factory drawings, some colour walkaround photos and glorious port view only colour profiles. The factory drawings are kind of interesting but perhaps of limited research value. The 16 colour walkaround photos are from NASM’s Ar234 and should be invaluable for reference. The colour profiles are really very nice indeed. Having other texts on the Ar 234 as comparisons the Kagero book turns out trumps on this score.

Lastly the book contains some masks in what looks to be 1/48 scale. I could not find any labeling to tell either way or what kit they were for. It also contains a series of sepia tone 3-D reprinted drawings of various parts and cross sections of the plane. If framed they would look most attractive. They are quite detailed and much like the Modellers data file drawings.

Overall, I liked the Kagero book a lot. It was extremely well written. The English text style is very easy to digest and for once I just couldn’t find typos. The transitions between various marks and prototypes was easy to follow and made enjoyable by large good quality photos The colour profiles are excellently produced and are a cut above any of the other texts. In some ways the book is light on in detail. Some of that is simply due to the limited history of this plane but also the more entertaining way Kagero intertwine the facts in a good story. It has lots of great photos and with the whole package in mind I’d make this a definite first port of call for a build of Radu’s masterpiece.