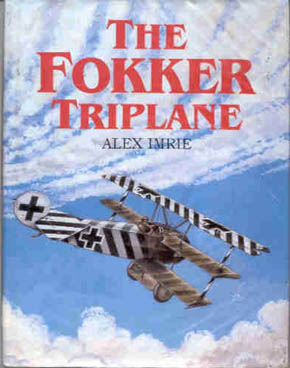 The Fokker DrI must surely rank amongst the Spitfires, Mustangs and Messerschmitts as the combat aircraft that most of 'joe public' could name when asked for a famous fighter plane.
Obviously due in no small part to Freiherr Manfred Von Richthofen, the DrI was a supremely agile combat aircraft in its own right and this book by Alex Imrie, takes the reader deep into the development and operational use of the infamous triplane.

A detailed description of The Dutchman Anthony Fokker's earlier designs which led to the invention of the cantilever wing, (regarded as the single most important invention in aeronautical design to come out of the First World War) leads to the prototype DrI, the V4.
The images to support the text are superb, bearing in mind they date from the early part of the 20th Century when photography was also in its infancy.

Historically the Triplane came about in response to T.O.M Sopwith's Triplane design and the book includes a picture of a stripped down RFC machine being studied by the KoGenLuft. Renewed interest in building driedecker combat aircraft allowed Fokker to design and build the DrI, eclipsing the Sopwith design and creating a legend.

Technically, the book is very detailed and describes the systems and operational factors that have made the triplane such an historic aircraft. Many lesser known (to me anyway!) details are covered, including the testing of one of the first reflector gunsights, and the fitting of captured LeRhone engines as a quick way of increasing power. In fact the LeRhone's were more powerful and more reliable than the Obereusel.

Armament is covered in detail with a description of the LMG08/15 infantry machine gun adapted by Fokker to provide a higher rate of fire. Dispelling another myth no doubt brought about by films such as George Peppard in The Blue Max is the idea of the pilot having to take his hand off the stick to fire his guns. In reality the DrI was equipped with two independent firing triggers on the control column. This advanced feature allowed the guns to be fired independently of each other. Another ingenious device located on the control column was a switch for interrupting the engine ignition.

Working independently of the throttle, it allowed the pilot to operated the engine at maximum revs, but control the power by switching the ignition on and off. As the throttles on the basic rotary engines weren't very accurate, this system allowed finer power control in combat and in the tricky business of landing the twitchy triplane.

The 'Red Baron' does get a chapter to himself and the markings of his aircraft are dealt with in detail. Again another 'aerial myth' is dispelled in that Richthofen didn't fly special versions of Fokker's aircraft, but used standard unit allocated machines. The chapter also delves into the red triplanes, why red was used and shortages of paint that led to partial finishing of his aircraft.

Whilst the photographs in the book are of a general good quality, their inclusion seems to support the idea that they illustrate the many colourful unit markings of the Jasta's. Unfortunately these haven't been translated into colour profiles and its left to the reader/modeller to interpret the monotone images. In addition to this there is a chapter which deals with the colour markings of individual Jastas and Geschwaders, something which invites a little more research and cross referencing.

Overall, the book is an absorbing insight into this famous aircraft, and whilst it carries little in the way of detail images for the modeller, (apart from a great pic of the guns and Oigee reflector sight on Pg 85) it does have a wealth of marking related photo's and text information on factory dope finishes that can with a bit of cross referencing, be translated to any of the large scale kits around.

Indeed the DrI seems to be enjoying a large scale renaissance with reissues and reportedly new tool versions, this book is well worth a look if you are contemplating adding a tail-dragger to your collection.