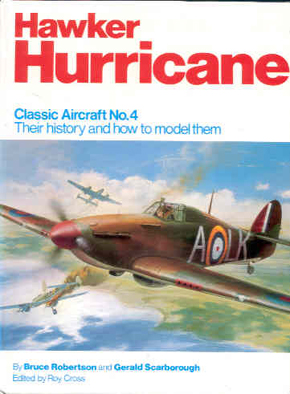 Following on from the previous three titles in this series of books supporting the enormous Airfix superkits of '70s vintage, the Hurricane title is no exception and has a similar tried and tested format. By the time of the Hurricane release, Airfix were lauded by the modelling press and hobbyists alike as the king of the large scale plastic kit. And indeed when the competition was the markedly smaller and inaccurate Revell 'Hurricane' Mk? there was no contest. Only some catastrophe could put a stop to more releases in this series, something of the magnitude of an international oil crisis perhaps?

Again this book is broken down into two distinct sections, the first part delves into the often overlooked reasons of design, that of the requirement by the Air Ministry for an eight gun day/night fighter. That Supermarine and Hawker arrived at the same solution by different routes is only now apparent from the design background of the companies and their aircraft designs.

Hawker reached the end of the line with the Hurricane and it's a sad fact that most of the Hurricanes produced were scrapped before the wars end, obsolete in a world of rapidly expanding aviation evolution. Nevertheless it was the Hurricane that was available in sufficient numbers at a time vital to the survival of RAF fighter command and ensured the continued existence of a free and democratic Great Britain.

The book is quite clear in stating that the Hurricane wasn't developed in the same sense as the Bf109 or its other contemporaries. Its basic design didn't allow major modification to the airframe and it was relatively minor increases in performance and the ability to be adapted to peripheral combat roles that ensured its continued use when in fact it was obsolete by the end of 1940. That maybe isn't quite fair to the Hurricane which was still a capable combat aircraft of rugged design and less susceptible to combat damage of the type that would be the end of some of its more thoroughbred contemporaries. (Perhaps its this 'purposefulness' of design which is attractive to modellers when mirrored against the 'fragile' looking Spitfire).

All photographs in the book are mono images and the monotone profile illustrations hark back to a time when colour printing was just too damned expensive for an esoteric publication such as a book on how to build a plastic aircraft kit! To be fair also, the modelling magazines of the day didn't carry a lot of colour and the profiles of illustrators such as Robin Algar were accepted as the standard using Letraset (remember this stuff?) mechanical tints to illustrate camouflage variations.

Detail wise, there are several good images of Hurricane 'innards' but again today's internet access means there is a wealth of 'free' reference material available. If anything, this publication serves to illustrate just how lucky we are to be modelling in this age. What is invaluable is the section on the Rolls-Royce Merlin and the photo's, illustrations and sectional drawings are great examples of the engineering draughtsman's skills.

Part two deals with the kit and follows the kits construction sequence with added detail or alterations called out. This fourth book in the series departs from the previous titles in that it is a bit more adventurous in adding detail. The tubular steel fuselage frames are essential if you intend to open any of the access panels on the kit that are not already removed by Airfix.

Scale drawings are provided to build up the entire fuselage framing, but interestingly none of the detail such as the wooden formers or stringers are added. Also not included is any detail of the fishplates used to bolt the tubing together. In this scale these would be very evident and alternative references are needed to really complete this area.

Saying this, techniques needed to construct the framework are described and from the photographs included, it's apparent that a very complex looking detailed hurricane can be built following Gerald Scarborough's constructions. He even goes as far as making eighty of the oval Dsuz fasteners from sprue and plastic strip, a task that would put all but the dedicated detailer off. Options for converting the venerable Hurri are limited and it's either a Mk I or a Mk II. Granted there are plenty of sub-variants such as Sea-hurricanes, Canadian variants and even a two-seater but in the main there is little external difference between the types.

A good thing? Well yes and no.

Yes as it's relatively easy to produce a whole rake of Hurricanes with small variations and no as the considerable effort to convert the Mk I to a longer nose Mk II, isn't really evident in the end result and would mean that the superb Merlin engine and the associated details could not be used. But then how desperately do you want/need a Mk II in 1:24th scale? Anyway one day maybe some resin manufacturer will tackle a new nose….

As in the previous review (Bf 109 CA No.2) and from a purely personal point of view, I'd love to see the series brought back to life and with the new releases in 1:24th scale by other manufacturers as well as Airfix's own in-house conversions (Sea Harriers and Mk Vb Spitfire) of its existing superkits.

These books are pure nostalgia, made all the more enticing by the fact that the original kits are still around. Unfortunately out of print for some years now, they are still to be found on e-bay auctions and in second hand bookshops.

Cover prices reflect the condition and the Spitfire and Bf 109 editions (No.1 and 2) seem to be easier to find than the Mustang (No.3) and Hurricane (No.4) also reflected in price differences.

Recommended for those with rose tinted memories of what modelling used to be all about!