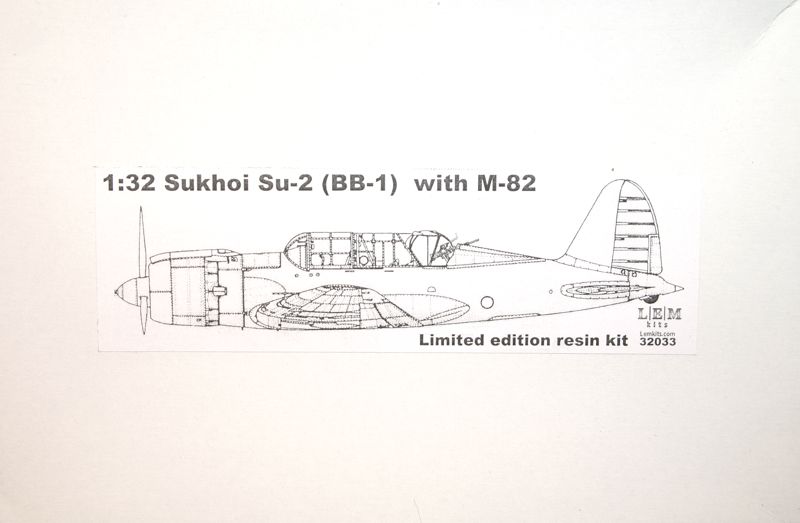 The Suhkoi Su-2, or BB-1 (Blizhny Bombardirovshick-1 or short-range bomber No.1) evolved from a requirement for a multi-purpose attack aircraft. The Sukhoi version was the winner. It was a sturdy airframe, a mixture of wood and metal construction, paired with a 1000hp M-88 engine. The aircraft was assigned to be produced at Plant No. 135 in Kharkov. It was also set to be produced at another plant, but that plant was soon converted to fighter production. Unfortunately, after 635 aircraft were produced, German attacks forced production to be moved to Molotov. There, the Su-2 was mated to the M-82 radial, which was also produced in Molotov. The plane had many modern features for the time including self-sealing fuel tanks and armor protection for the gunner/navigator all around, indirect lighting of the instrument panel, warm air heating for the crew, dual controls and the ability to extend landing gear manually in case of hydraulic failure. All this made the Su-2 one of the most survivable aircraft of the VVS at the time. Finally, LEM Kits has given us LSP-ers a kit of this important aircraft.

As LEM Kits has re-started production, it was time to finish this review. This was the last release before hostilities started in Ukraine; I ordered one just in the nick of time as I believe it was shipped days before all hell broke loose.

Anyway, this the first kit of the Su-2 in 1/32nd scale. It is the later version equipped with the M-82 engine. In one of Yefim Gordon’s books he refers to it as the Su-4. I am just going to refer to it as the SU-2 from now on, but that gives you a list of search subjects as there really isn’t too much out there in the way of references or operational photos. 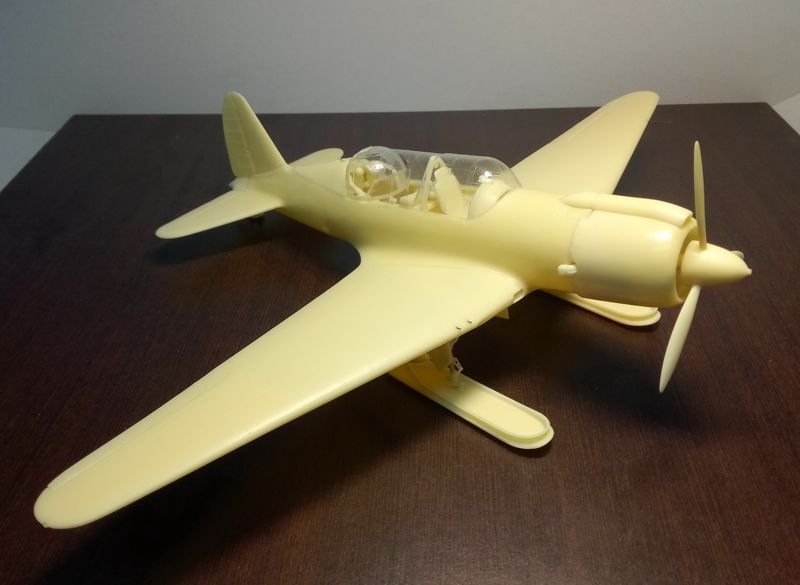 (Image from instruction CD) The kit is made up of over 170 parts, most being of cream-colored resin but also including wire and resin with wire core. There is also three clear resin parts, two vacuform canopies (one is spare) and printed film instruments. There is also included a sheet of generic Soviet stars and white number decals. Instructions are in the form of photos on a CD. There is also a folder with references culled from the internet, and a LEM catalog. 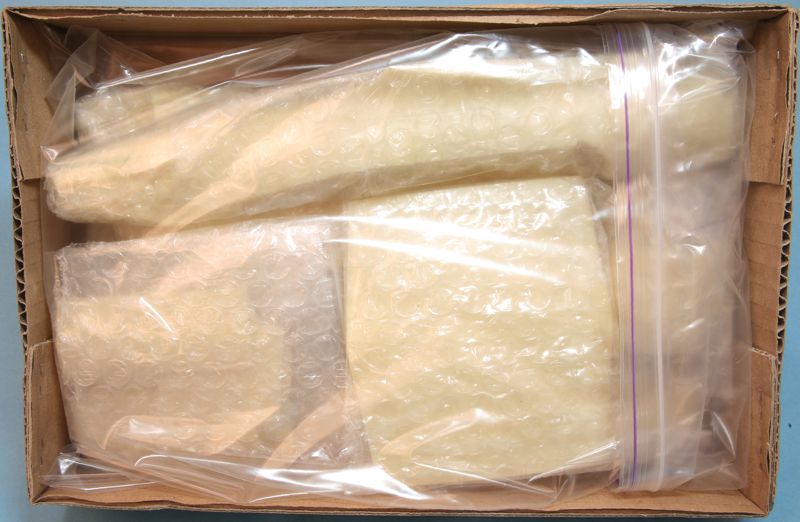 The kit comes in a cardboard box which consists of a sturdy corrugated bottom and relatively flimsy thin carboard top. The parts are well packed: as many as possible are placed inside larger parts then wrapped with bubble wrap and placed inside Ziploc bags. The only problem is once you unpack the parts it is hard to get everything back in the rather small box, even without the bubble-wrap! 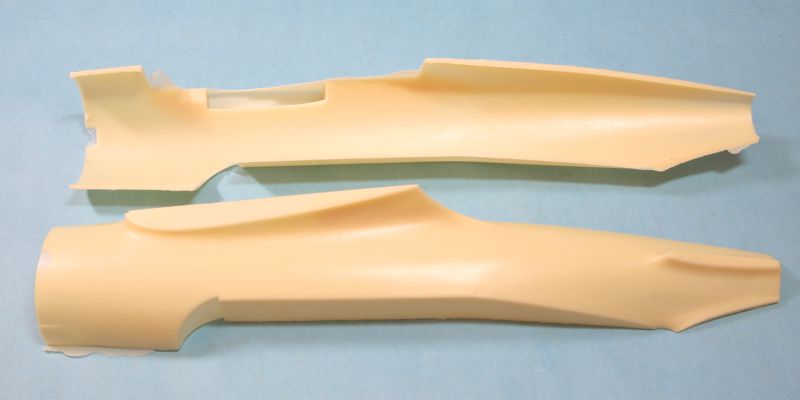 The fuselage is in two parts as usual. Castings are clean with just some clean up on the edges. The surface has fine scribing of panel lines and rivets. 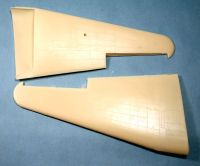 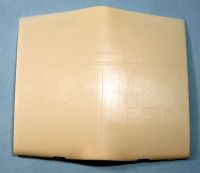 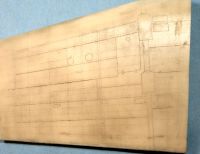 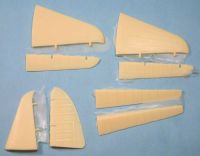 The wings consist of three main pieces: a lower center section and two outer wing parts, which are cast hollow for about two-thirds of their length. Again, they are covered with fine surface detailing. I have (roughly) used some ProModeller wash on the center section to show the detail more clearly. Also, note wheel, bomb bay and other openings are cast closed so if you wish to model the aircraft in flight, no extra work is required. If you wish to open everything up, another set of doors is provided. Tailplanes and all moveable flying surfaces are separate. 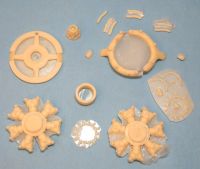 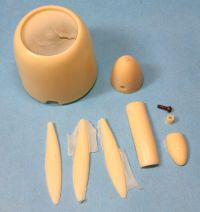 The engine consists of twenty-three resin parts, and the builder must cut ignition wiring and pushrods from the provided wire. Smaller parts are cast within a film which must be cleaned from the parts. A collector ring and several exhaust pieces are provided. The end result should provide plenty of detail, as shown in the instruction photo. The cowl is provided separately and is commendably thin and round. The scoop is separate and in two parts. Individual props are provided and a separate spinner. It is attached via a small screw and small cylinder. (Images of completed engine from instruction CD.) 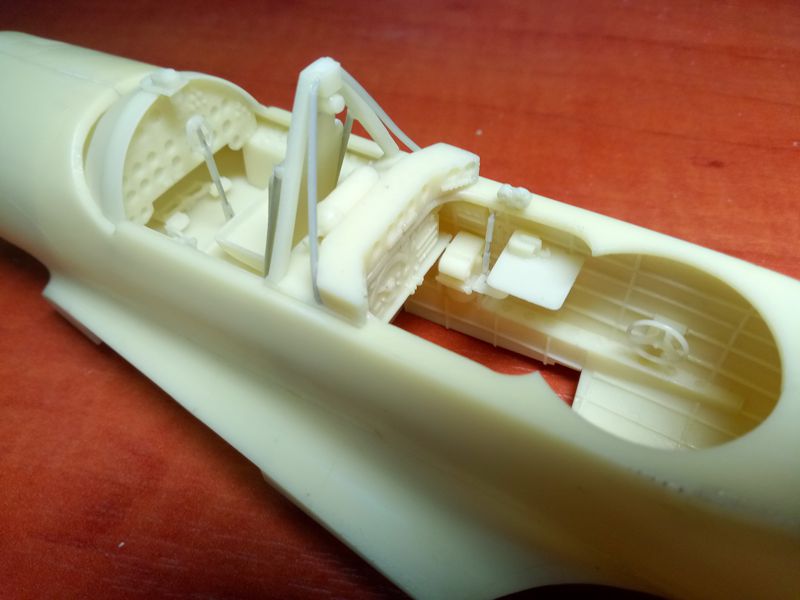 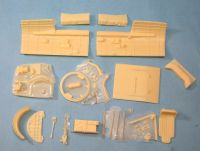 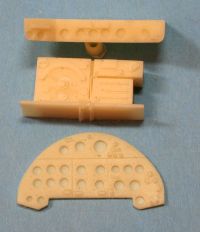 (Image of completed cockpit from instruction CD) The cockpit and gunner/bombardier/radioman’s position are also well detailed, consisting with about 40 parts, again with smaller parts cast within a film. I do wish we had some verbiage on this area as there is no description of the equipment, nor any painting guide. One must make do with guides for similar equipment in other references and guides. For instance, I have yet to figure out if the large device to be mounted in the rear cockpit is a bomb sight or a recon camera? No seatbelts are provided. Instruments are provided on a printed film requiring the pilot’s instrument panel to be sanded until the instrument openings are clear, the film glued on, and white paint added to the back. For the backseater’s instruments, the film will need the instruments punched out individually, backs painted, then placed in position as the panel is too thick to sand down. Unfortunately, the instruments are on the fuzzy side so in the end it might be better to find similar aftermarket instruments such as from the excellent offerings from Airscale. They do not offer Russian instruments specifically, but I am sure some of the other countries can make do at this scale. A machine gun is provided in resin around a wire core, though on my copy the resin did not fully cover the wire and will need some repair. 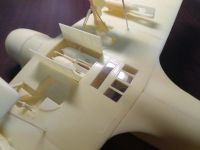 (Completed image from instruction CD) LEM Kits also includes parts for the bomb bay, providing the walls, doors (to replace the ones to be cut out), bomb racks and bombs. Also included are underwing racks and bombs if one so wishes. Yefim Gordon talks about overloading the plane by trying to carry both internal and external bombs, but apparently it was sometimes done to get as much firepower to the target. The bombs look nicely done with thin tails and well-cast bodies. 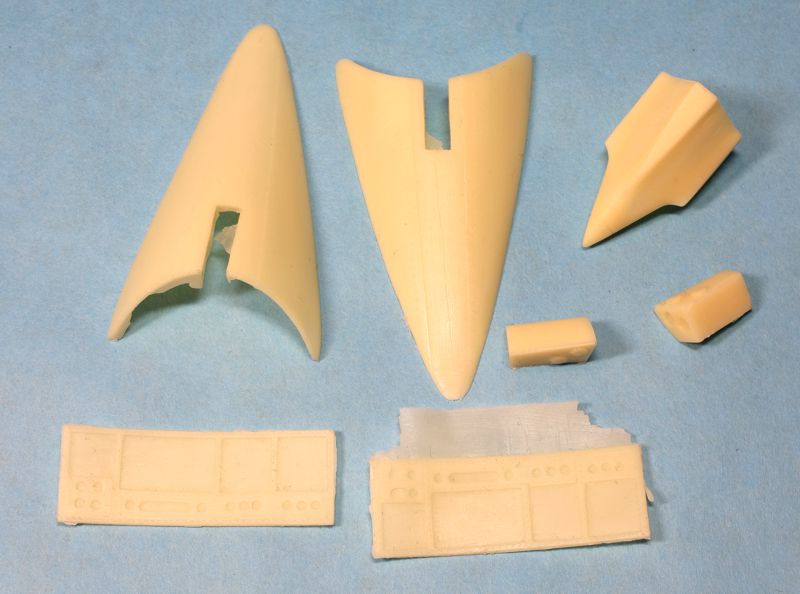 The kit provides the rear fairing for both the raised or lowered position, though they don’t show the lowered version in the kit instructions. It requires cutting down the supports on the rear boxes. I believe this would only happen in flight before going into combat. 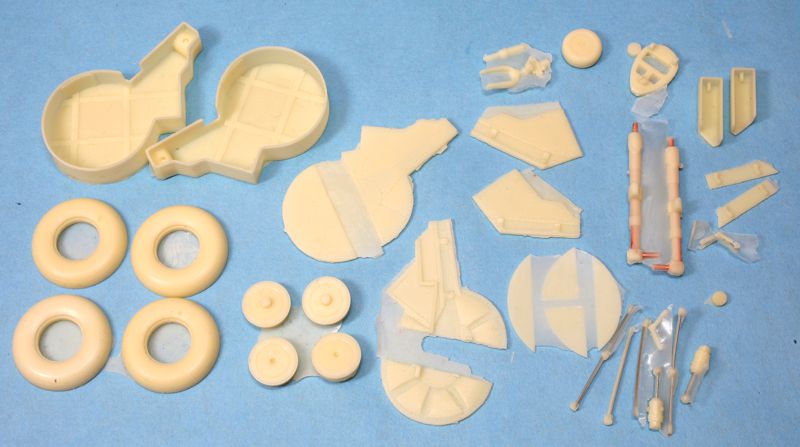 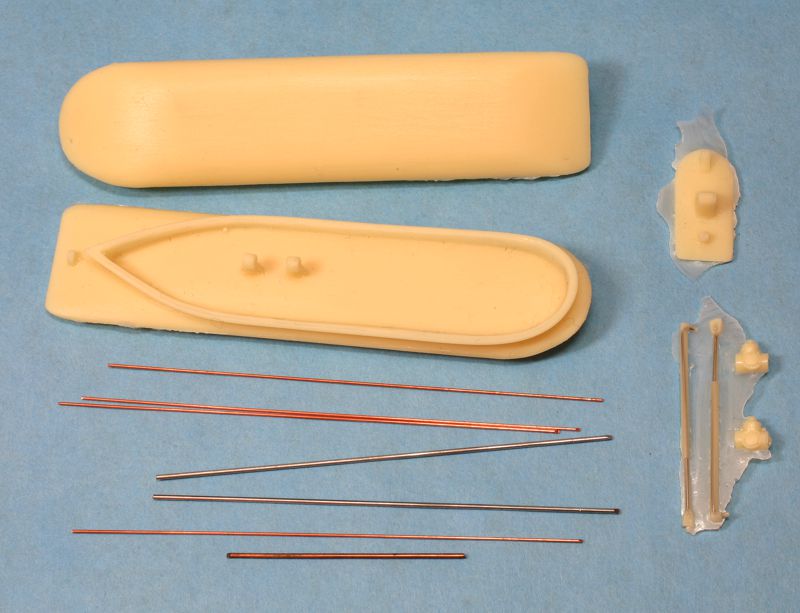 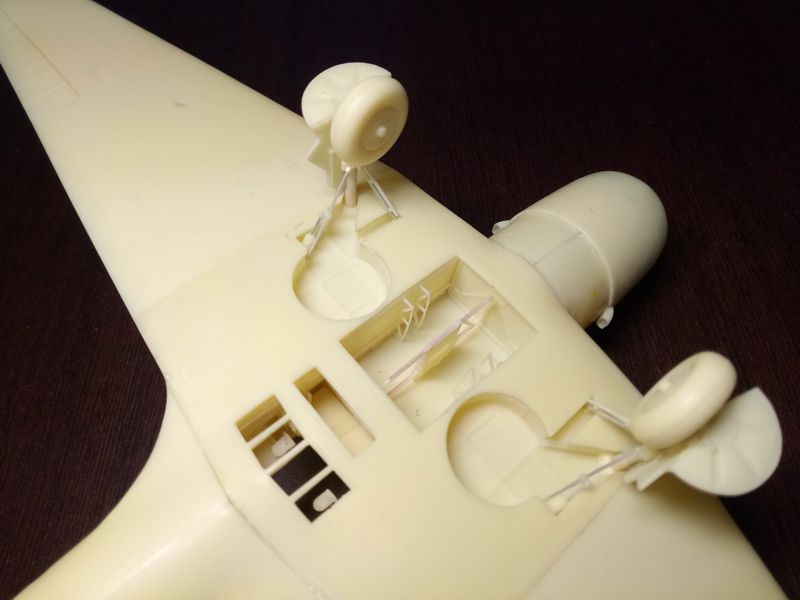 (Constructed image from instruction CD) The builder gets two options for landing gear: the standard wheeled setup or a set of skis for main and tail gear. There is a lot of detail to either setup; the wheeled gear includes various pistons and bracing, new doors (to replace the ones to be cut out), wheels cast in two halves, and separate hubs. The skis are well done with brass rods for braces. Note the bracings are cast around wire cores, but some on my example the resin doesn’t completely cover the wire core, so some repair work will be needed. I don’t know if they were ever used beyond test flights but would make for an interesting model. 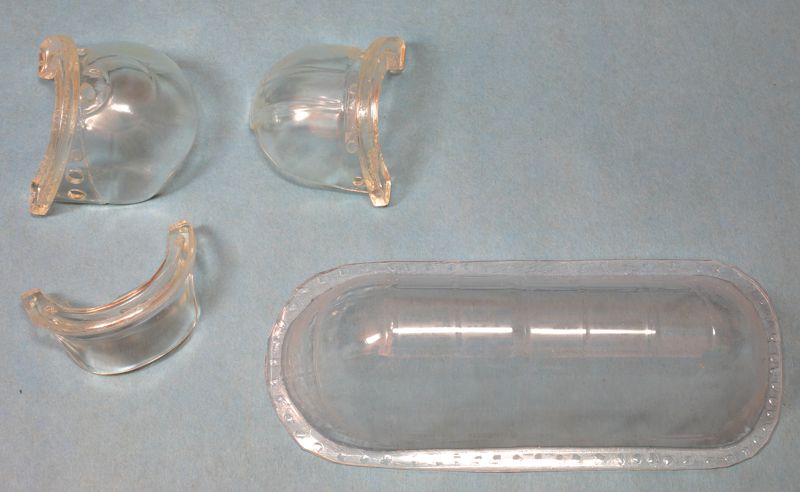 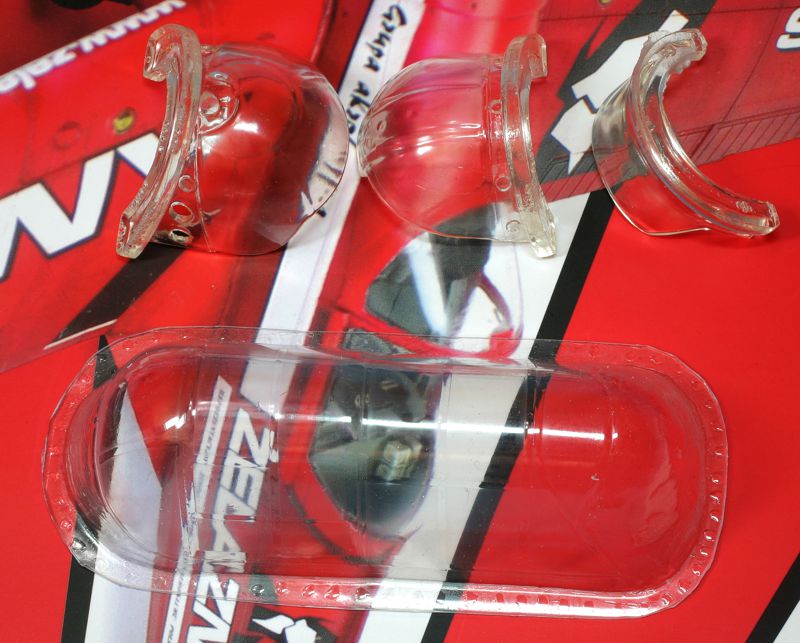 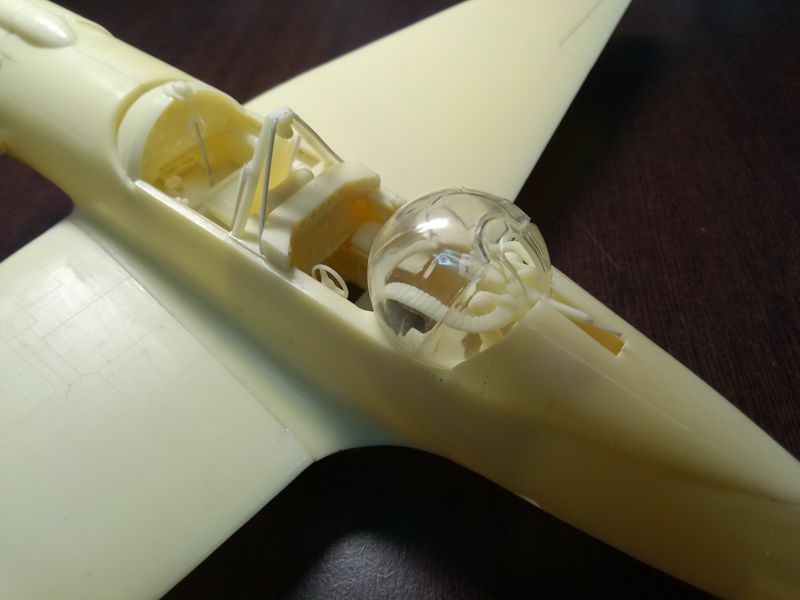 (Completed image from instruction CD) Clear parts consist of three parts for the rear turret in cast clear resin which are a bit thick and with the spherical nature of the turret cause some distortion. I did not see any bubbles, however. The two parts of the turret are as per the aircraft, so the turret should be able to be posed in the open position to show rear cockpit detail. The main canopy is a vacuform, thankfully there is two copies in case your knife slips, but unfortunately is formed in one piece in its closed state. Assuming you have success prepping one copy, it should be possible to cut up the two copies in such a way to give you the sliding section separate so you can pose it open. The canopy is quite clear if you want to leave it closed. One thing not included, at least in my copy, is a sheet of acetate to provide the glazing on the underside of the plane. Not a big issue. You are expected to size the acetate to the cutouts; no dimensions are given. 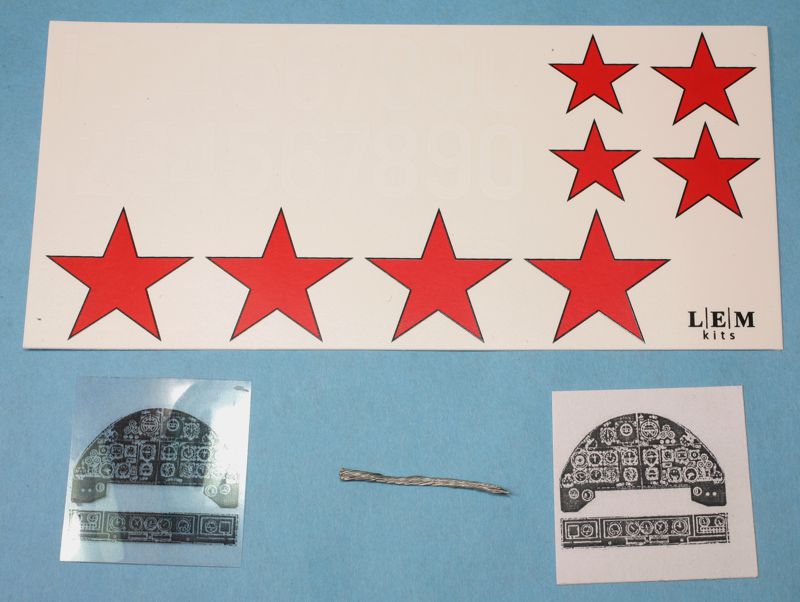 Other inclusions include the instruction and reference CD, a set of generic Soviet stars and white numerals, the instrument panels printed on paper and acetate, and a short length of braided copper wire. No examples of markings are provided, you are on your own there. I believe the wire is supposed to be unraveled and used for ignition wiring.

I believe this to be one of the, if not the, most complicated models that LEM Kits has produced yet. It will not be for the beginner modeler, but for those fans of Soviet aircraft willing to put in the work, it fills a definite void in 1/32nd scale.