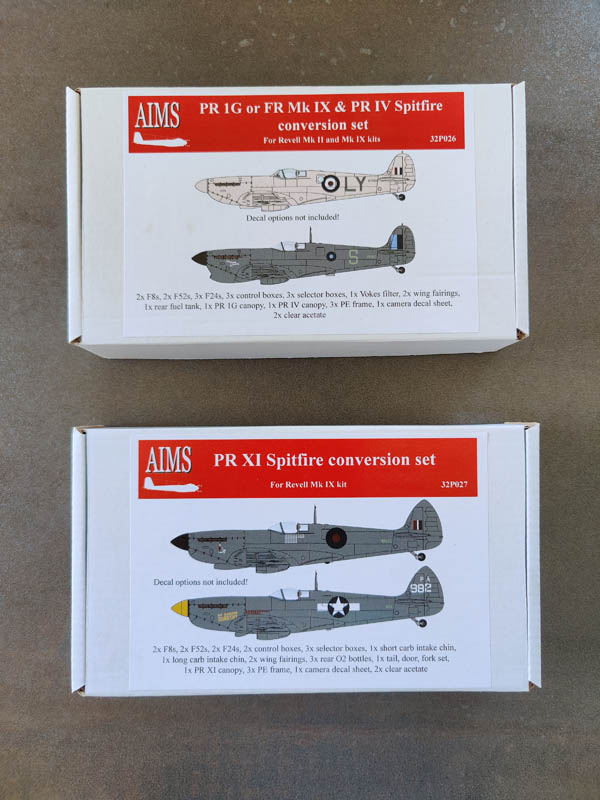 The various Recce Spitfire versions have been overshadowed by the fighters because reconnaissance has always been considered as a less glamorous role but also because they were always a minority lost amongst thousands of fighters. However, such unsung heroes had an important role since the beginning of the war. The first versions conducted some strategic missions over Germany when the fate of the Great Britain was still undefined. And the last versions had an important tactical role during the invasion of the continent. So, it is quite sad modelling options are generally limited to conversions.

In 1/32, Alley Cat released PR XI conversions many years ago. The sets were intended to be all inclusive offers with different references including decals corresponding to the national users of the version such as the RAF, the USAAF or Norway. Unfortunately, the sets had various problems. First, if they nicely depicted the external features, most of the internal recce specificities were not included. Second, they were tailored for the quite expensive Tamiya Spitfires. Third, the unarmoured windshields were far too thick. And, finally, they were discontinued and are still not available. In the meanwhile, Revell released a simple and rather cheap Mk IX kit. So, the market was ready for another attempt.

Last year, John McIllmurray contacted me as he was struggling to find some technical references to end the development of Spitfire recce versions conversion sets. I sent him copies of wartime pictures and TM views and reviewed the instruction sheets. We discussed the topic and the specificities of such less-known versions as there is not yet a “final” reference about the recce Spits. The project became far more ambitious as John decided to cover most wartime Merlin-engined marks with a comprehensive coverage of their internal and external recce features. This explains why many months were finally required to design such sets as finding the relevant information was far from easy. 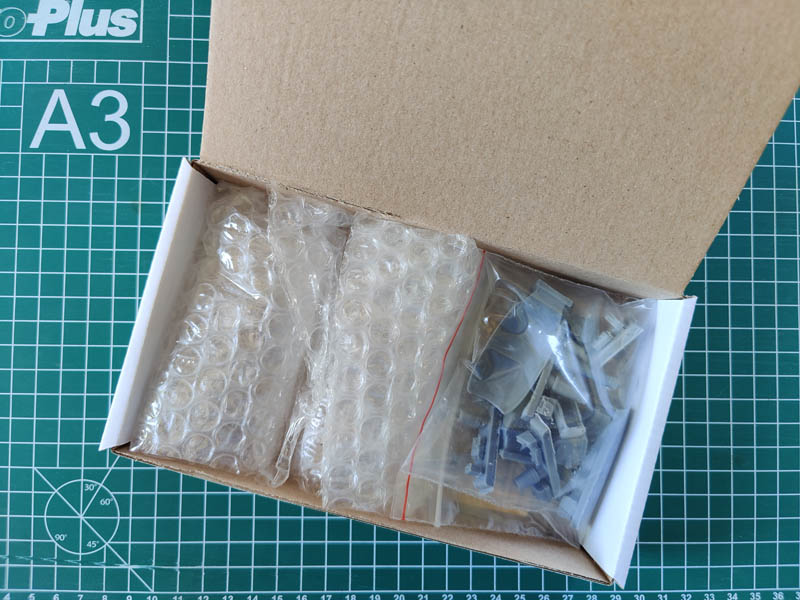 The contents of the sets are the work of John. I did not intervene in that step of the process. Accordingly, I’m reviewing them with what I consider to be—as much as possible—a not too subjective standpoint! The reviewed sets were courtesy of AIMS. 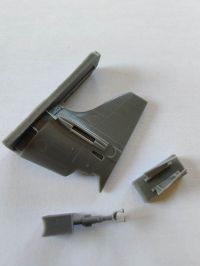 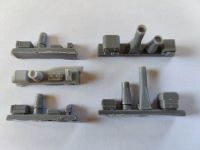 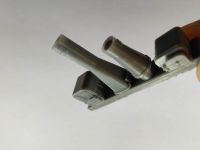 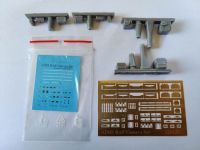 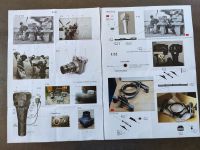 The parts of each set are separated by material type and cautiously packed in a sturdy cardboard box.

The typical recce canopy clear parts are incredibly transparent. They have been made by Falcon that is without any doubt the best producer of transparent vacuformed canopies. The plastic is sufficiently thick and sturdy to give the possibility to clean such parts without too many issues. Just take your time to work cautiously. If the plane you have selected did not use the canopy with blisters, simply rely on the Revell canopy part.

The photoetched parts mainly cover the cameras cradle frames and brackets, the camera hatches and the additional cockpit components. They are identical in both sets.

Two small film sheets give the camera windows and the additional instrument faces. The windows are “in scale”. So, they are very thin. Do not use CA glue to glue them to the frames as there is a risk to fog them. Future or a diluted strong white glue (such as Gator glue) is probably a better option.

Keep in mind that such conversions do not simply ask for adding or replacing some parts, they also ask for a minimum of elbow grease. In that specific case this essentially asks for drilling camera ports, filling hatches and wing gun panels and adding new scribed lines because of the different wing structure. According to the type, you may also have to remove some bezels from the front instrument panel.

Mid-war recce Spits got fuel tanks in the wing leading edge and this created some accidents because of overpressure created by heat. Accordingly, overpressure control tubes were added close to the wing tip. There was no easy way to reproduce accurately such parts in the conversion set. So, it is recommended to get the thinnest Albion tubes (external diameter: 0.3mm), drill a 45° hole in the wing and add a small section of that tube folded rearwards to be glued on the top of the wing surface.

The set 32P26 includes the earlier PR 1G (or FR IX) and PR IV Spitfire conversion parts. It also contains parts allowing to change a Mk IX into a FR IX. Accordingly, it has been designed to be used with the Revell Supermarine Spitfire Mk IIb (kit 03986) and/or Mk IXc (kit 03927). 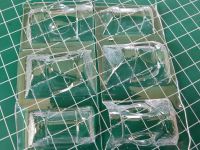 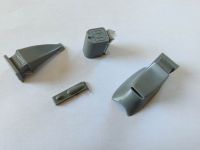 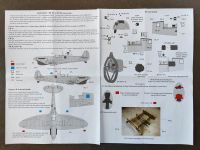 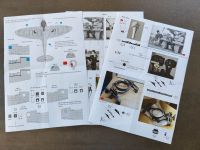 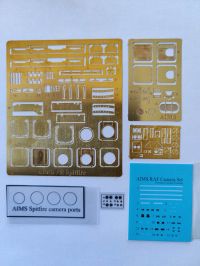 That set includes the following parts:

The set 32P27 includes the late war PR XI Spitfire conversion parts. Accordingly, it has been designed to be used with the Revell Supermarine Spitfire Mk IXc (kit 03927). 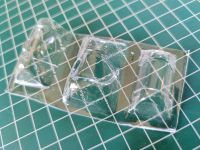 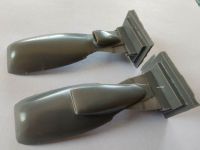 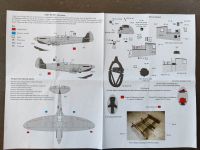 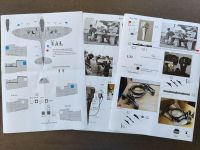 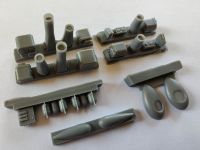 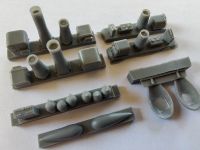 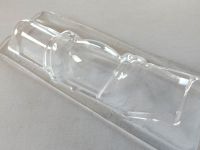 That set includes the following parts:

The 32P25 set has four resin gates with very good scale replicas of the F8, F24 and F52 cameras plus the control and selector boxes. A large photo-etched fret (essentially dedicated to the camera frames), the decals and two pages of instructions complete the set. This set may be used to detail other RAF planes that also used such cameras (e.g. Mosquitos, late Seafires or DH Hornet).

The 32P29 set has the tail, the landing gear leg and the well doors. The tail part is based on the Revell kit fuselage. This means that the rivet and panels lines are identical and there is no surface difference between the resin tail and the plastic fuselage parts. Simply saw the plastic fuselage halves at the corresponding panel lines and add the new tail after fuselage assembly. It is recommended to keep part of the resin gate to get a stronger assembly.

A major warning: As John explains in the instructions foreword, the conversion sets do not correct or detail the Revell kits. So, if you want to correct the deficiencies of that kit, you will need to look after other sets from manufacturers such as Barracuda or Eduard (e.g. to get more accurate wheels, more accurate radiators or a more detailed cockpit).

The set is very comprehensive. Actually, it is a double conversion set giving enough parts to make two recce Spits: a PR IV and a FR IX or a full PR IG. Even if you build two recce Spits with that set, you will still have some leftover cameras that will be useful for other kits.

When the instructions mention the PR.VII, it is actually same plane than the PR IG.

Early recce Spits are a minefield with regard to their configuration because few were built and that configuration evolved according to the needs. Add to that the use of some fighters converted into recce planes in the field and this quickly becomes a total conundrum!

However, a major effort was done to cover the features of early recce planes such as all the common camera types, the canopy with blisters, the long-range internal fuel tank located behind the seat and the small but numerous cockpit changes.

Accordingly, chose your topic, define the recce configuration you want to depict and work from there! The set has everything you should need to mimic an early wartime configuration. Be careful with mid-war configurations as the planes got a lot of changes that are not very well documented. For instance, it is quite probable the internal tank was not used any more when the leading edge wing tanks appear. However, never say never with such Spitfires!

Moreover, the RAF was not the sole user of that mark and the story of the PR.XI did not stop with the end of Word War II. So, again, chose an airframe, try to check as much as possible the specific features and start from there.

Note that it is also necessary to scratchbuild a small antenna support fairing located under the fuselage, behind the wing trailing edge. This lacking item was detected after the end of the design of the parts but could hopefully be included in the instructions sheet.

The best effort was done to give as much as possible useful information in the instruction sheets. As the pictures in that review show it, they even include many wartime detail pictures and walkaround views of the camera devices. Nonetheless, they cannot replace full books even if there are few references dedicated to the recce Spitfires. The Internet is unfortunately not a major source of information about such planes because of the very small number of preserved/restored recce Spitfire airframes.

The two Ventura ‘Classic Warbirds’ booklets dedicated to recce Spitfires are HIGHLY recommended. The first one (volume 10) is named ‘Merlin Spitfires”. Written by Wojtek Matusiak, it is focusing on the use of such planes and giving many airframes wartime pictures with some useful profiles. The second (volume 11), is named ‘Merlin Spitfire in details’. Written by the same author with the help of Malcolm Laird, this is an absolute goldmine as it focuses on the technical configurations of the Merlin engine recce Spitfires and has many TM views as well as walkaround pictures. It does not cover everything (such as the PR.XI O2 bottles) but is without any doubt the best reference about that topic published up to now.

Richard Franks' excellent books about the Merlin engine Spitfires are also highly recommended as they have quite detailed sections about the recce versions. The first book was published more than twenty years ago by SAM publications in the Modeller’s Datafile series (volume 3, republished as volume 23). An updated version was more recently published by Richard Franks in his own Valiant Publication series of very detailed monographs (Airframe in Miniature volume 12, two editions).

The ‘Spitfire: The History’ huge ‘bible’ written by Morgan and Shacklady is also giving very useful information about the recce Spitfires.

With regard to the PR XI, Osprey released a very interesting book named ‘Spitfire in blue’ in their Classic aircraft series. This book (published in 1996) describes the story of a single plane (PL965). However, it has many wartime pictures, some colour walkaround pictures, good scale plans and other interesting information.

‘Eyes of the Phoenix’, published by Hikoki in 1999, details the World War II RAF recce full scope of operations in the far East. It is not an essential reference but can give some good ideas to depict a recce Spit in a less known theatre of operations.

And the rare PR XIX books also give some interesting information as this mark was globally an improved PR XI with a Griffon engine.

Last, many other Spitfire books have interesting information about recce Spits here and there but this clearly goes further than the scope of this review.

The AIMS sets are probably the most detailed recce Spitfire conversion sets we will ever get in 1/32. At least, they give the possibility to reproduce different Spitfires in the uncommon azure blue/white, pink or PRU blue schemes.

They are designed to be used with the Revell kits but it looks they can also be used with kits made by other companies. Actually the only parts that are specifically tailored are the clear canopies and chin parts and they are not required for all recce Spitfires or are already included in some kits (such as the Tamiya Mk VIII).

Even if everything was done to ease the job as much as possible, the two conversions are not recommended for beginners as they ask for kit modifications and a serious investment in the study of the configuration of such planes. On another hand, using the tail to change a Revell Mk IX into a Mk VIII is a simple job. And, finally, the camera set is an absolute godsend as it is at last filling a major gap in the 1/32 market.

Because of John’s current health issues, the sets are unfortunately not anymore directly available from him. However, Hannants is getting regular batches of AIMS sets and they are easily available through that channel.

Hopefully, one day we will get some good Griffon engine 1/32 Spitfire models and this will open the path for additional recce versions.