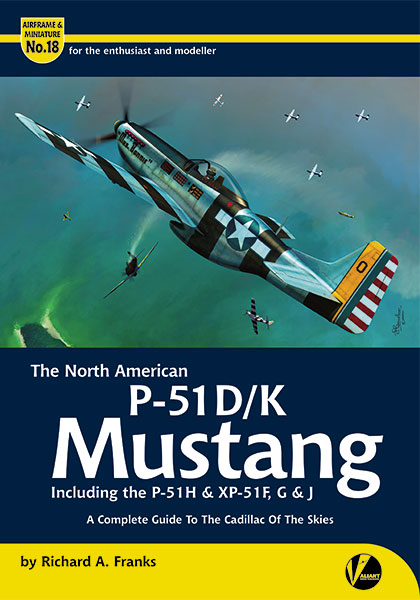 UK publisher Valiant Wings Publishing has released Number 18 in its Airframe & Miniature series, and its full title is a quite a mouthful: The North American P-51D/K Mustang Including the P-51H & XP-51F, G & J: A Complete Guide to the Cadillac of the Skies. Phew! The author is Richard Franks, and the illustrations are shared between Richard Caruana and Wojciech Sankowski. The terrific cover art is by Jerry Boucher.

The first thing that struck me when I picked up this book was how heavy it is; at a hefty 272 pages plus a gatefold section of scale drawings, it is indeed a weighty tome. It's extremely well printed on quality glossy paper, and the reproduction of all drawings and photographs is first-class.

The contents are broken up into eight separate chapters, grouped into two distinct sections: 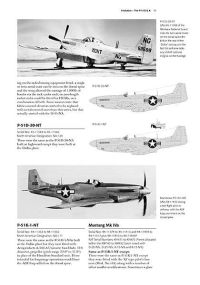 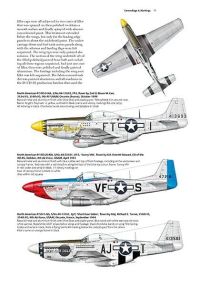 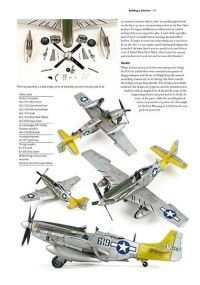 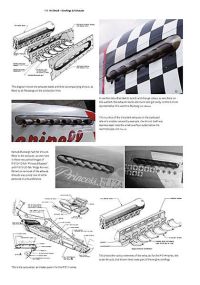 While not mentioned in the table of contents, the Preface weighs in at a substantial 39 pages, and describes a potted history of the bubble-canopy Mustang variants, which provides useful support for the subsequent technical information. Foreign operators are covered, along with a table summarising National Guard/Air National Guard service periods.

The Camouflage & Markings section covers 44 pages, and includes a single-page stencil placement guide. Rather than a dedicated section for colour profiles, they are instead interspersed throughout the text as necessary. They are by Richard Caruana as usual, and are very nicely rendered indeed. Mustangs in foreign and post-war service are given extensive coverage, and the inspiration on offer for finishing your Mustang kit as something a little off the beaten track is worth the cover price alone, in my view.

Chapter 5 features a brief description of the commonly available P-51D/K model kits. Not only do we have a range of options in 1/32 scale, there is also a couple of options in 1/24 scale, thanks to Airfix and Trumpeter. Older kits are ignored in this section, however, but with modern kits from Tamiya, Zoukei-Mura, and Revell, this is hardly a problem.

The modelling section features an unprecedented seven kit builds, including one by the late Alan Bottoms, as a tribute to his passing in 2019. The builds comprise 1/72 Airfix and 1/72 Tamiya builds by Libor Jekl, along with 1/48 Airfix, 1/48 Eduard, and 1/32 Revell builds by Steve Evans. Steve Evans also builds the Halberd Models 1/48 Cavalier F-51D conversion, which uses the Eduard kit as a base. Alan Bottoms' build features the Tamiya 1/48 P-51D and staff car set, originally built in 2008, though it only features three photos. These models are extremely well done, and will serve as inspiration and guidance for our own Mustang builds when we get to them.

Chapter 7 is called Building a Collection, and features a series of annotated isometric 3D line drawings by Wojciech Sankowski. These are designed to illustrate the salient differences between the various prototype and production airframes as the series developed, and form a perfect companion to the earlier 'evolution' chapters.

Chapter 8, In Detail, features an extensive selections of archival and contemporary photographs and diagrams, including a series of walkaround detail photos of surviving airframes. The walkaround photos have been selected with a modeller's eye, which is not only welcome, but very handy.

The scale plans included at the very back of the book are to 1/48 scale, and presented in gatefold format. They're printed on heavy, non-glossy plain stock, covering the following airframes:

Not being a Mustang expert, I can't give a considered evaluation of the accuracy or veracity of the text itself, and so will leave that to more knowledgeable readers. All other elements of the book ooze quality however, from the clear photography to the beautiful profiles and the detailed scale plans. Contemporary photographs are plentiful and very nicely reproduced. Overall it's an impressive attempt to be the Complete Guide the title alludes to. Recommended!