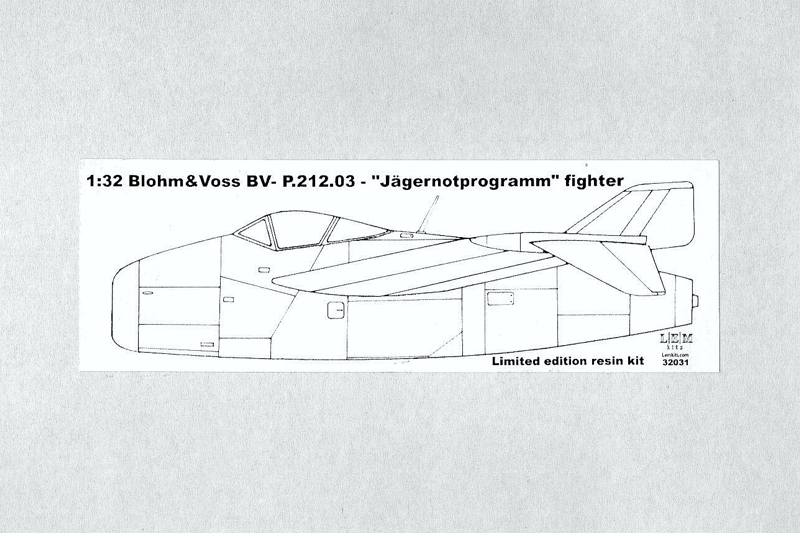 By the end of 1944, the Luftwaffe High Command (OKL) knew that a better high-altitude fighter was needed. With that the Emergency Fighter Competition was created. By February 1945, three proposals had been received from Messerschmitt, Focke-Wulf, Heinkel, Junkers and Blohm & Voss. Most designs took advantage of the new He S 011 jet engine which was being developed.

The OKL selected the Ta183 but three prototypes of the B & V fighter were ordered. The prototypes started were of the third design version, the P.212.03 which featured a lengthened fuselage and the winglets at the far end of the wings. There were several armament variants proposed, including carrying 22 R4M rockets and two 30mm cannon, or a SC 500Kg bomb and three 30mm cannon, or even seven(!) 30mm cannon. At any rate, the prototypes were started but never finished.

LEM Kits has been offering several of the proposed fighters of the Emergency Fighter Competition, and now the Blohm & Voss P.212.03 is offered.

The kit consists of LEM Kits standard tan resin, in sixty-two parts plus decals. Of those sixty-two parts, fifty-eight are resin, a length of wire (for axles), plus a vacu-form canopy and a spare, and a film with instrument faces printed on it for the instrument panel. Note many of the small parts are cast with a very thin film. 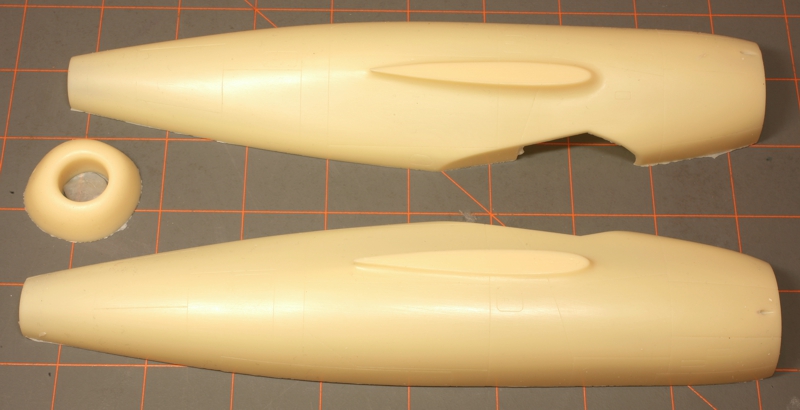 The fuselage consists of the typical two halves split vertically, with a separate one-piece nose cone. Panel lines are finely done, though hardly visible on the tan resin. For those who like to display their models in flight, you are in luck as any openable panels are cast in place; so you must cut out any engine service hatches, gear wells, or the bomb recess, if you decide to model that version. The castings are quite thin so this shouldn’t be too much trouble. The fuselage includes openings for two cannons in the nose. 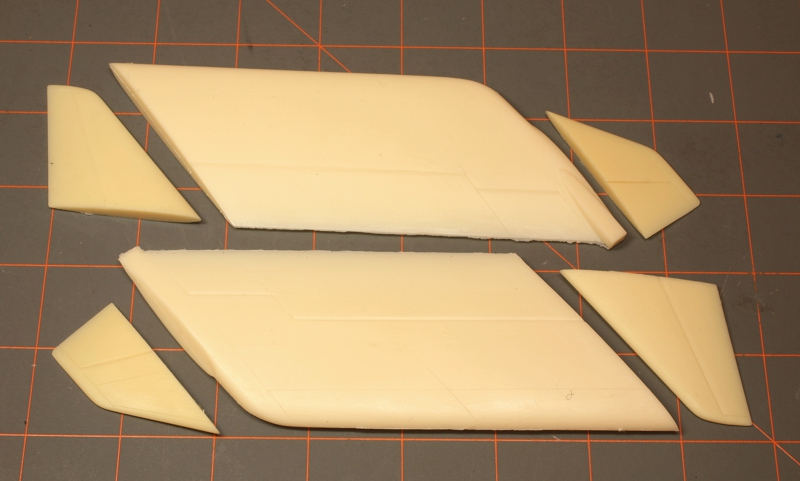 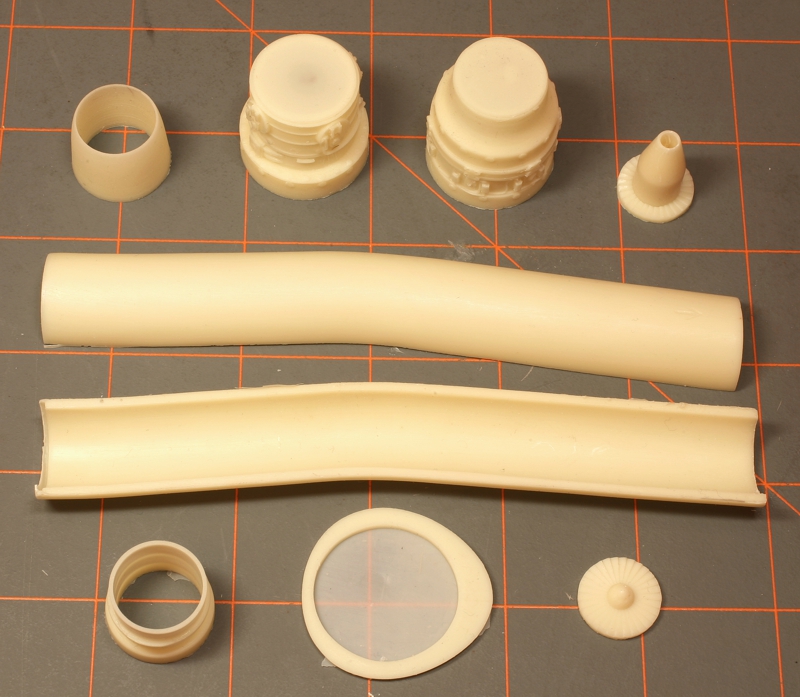 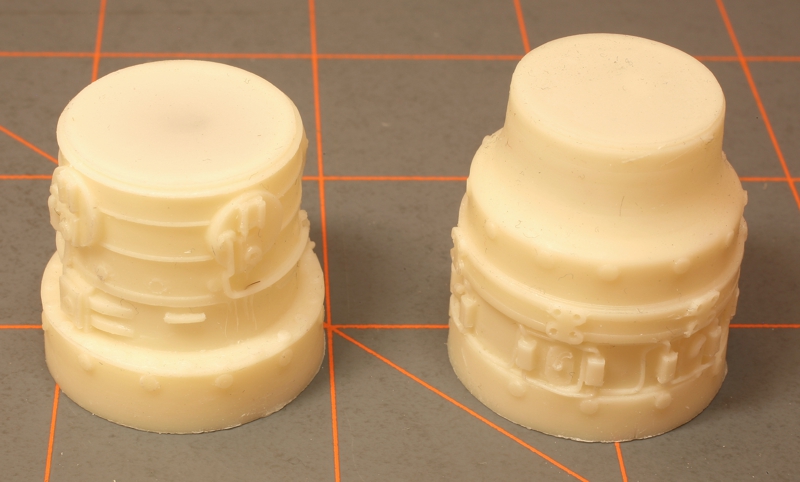 The intake is in two parts and connects from the nose cone to a four-piece engine, plus exhaust tubing and supports. I have included a close-up of the engine parts, which can be exposed by cutting out the access panels. 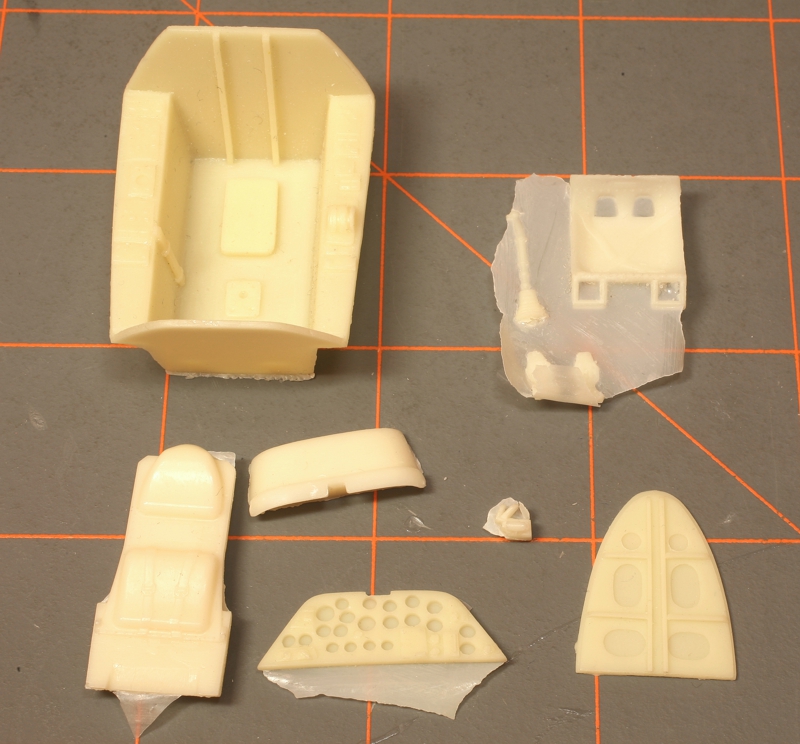 The cockpit consists of ten parts plus the instrument film. Simple yet effective. 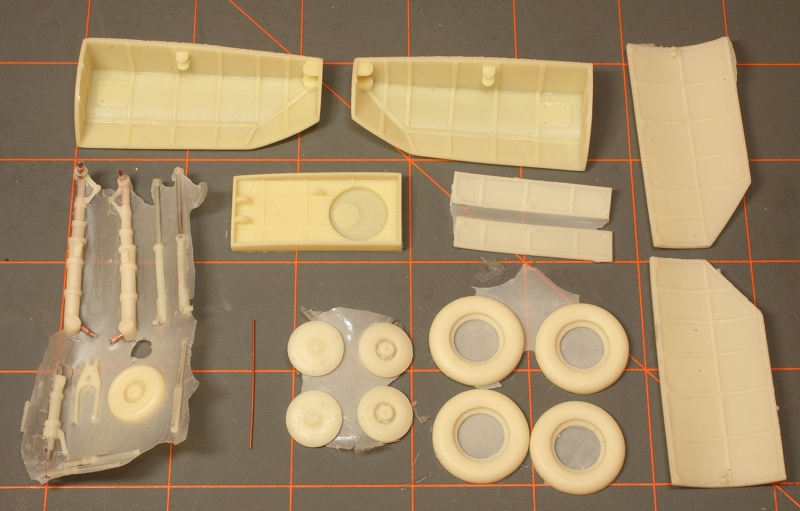 Landing gear bays are separate with detailed doors replacing the openings cut out of the fuselage. The landing gear has brass wire embedded for strength. Wheels are in two halves, which I hate, but allow for puddle casting. Hubs are separate. 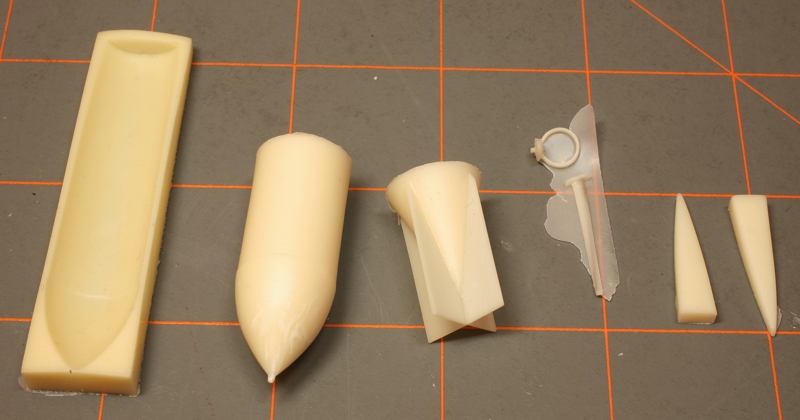 Here is the bomb recess insert and the two-piece bomb, as well as the antennae. Note, the bomb insert is optional if you want to do a pure fighter version. 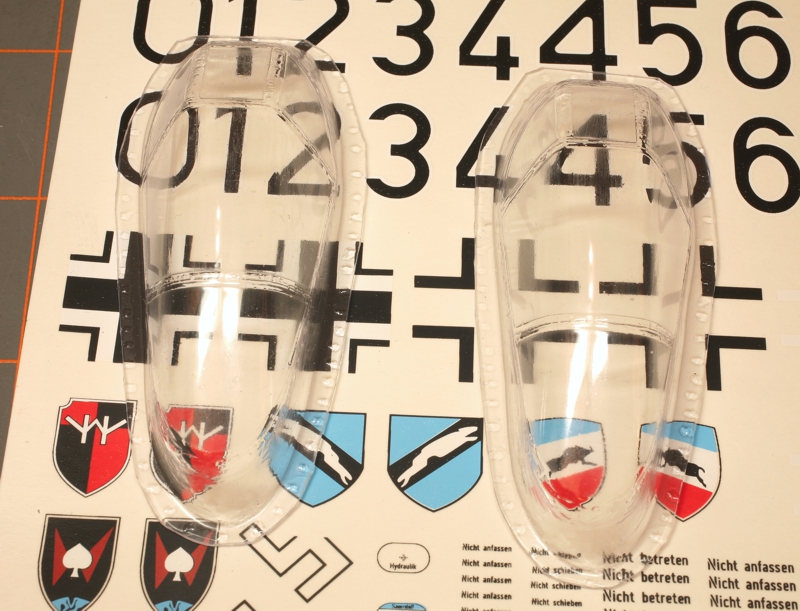 The vac canopies are nice and clear, and it is always good to have a spare. 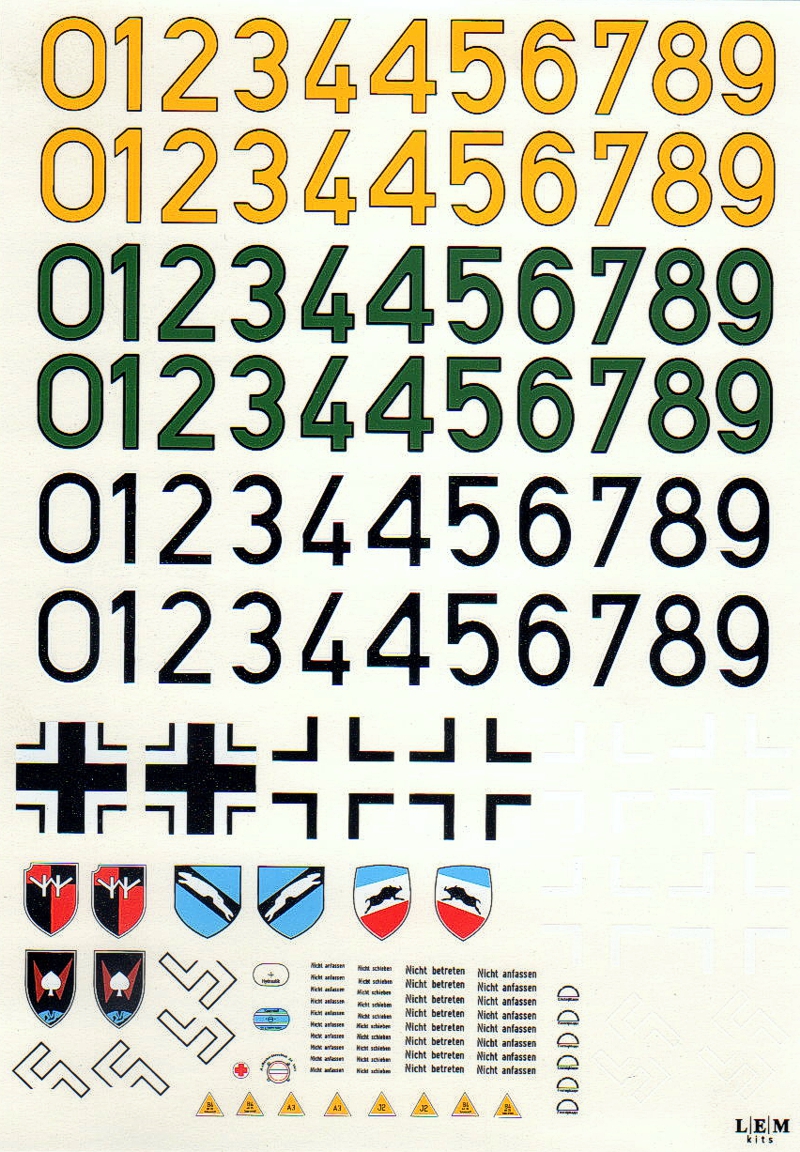 Decals are LEM Kits standard generic Luftwaffe sheet with numbers, crosses in black and white plus some unit insignia. I can’t verify for their quality as I haven’t used any yet. 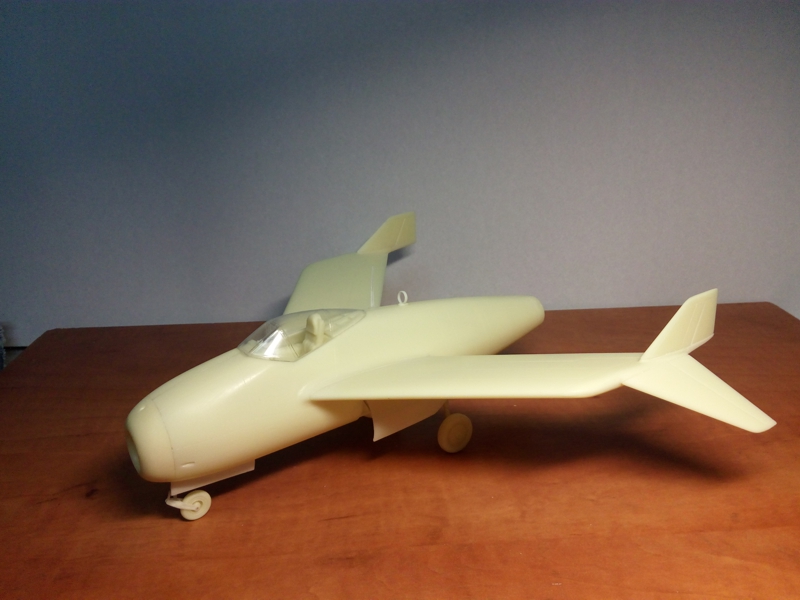 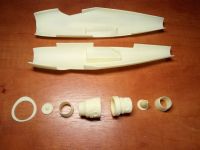 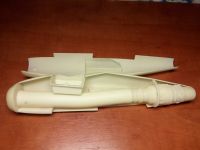 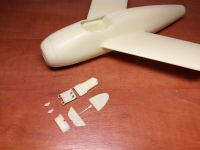 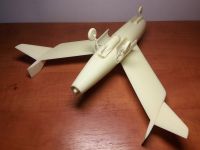 Instructions are a series of photos with no text on a CD along with a LEM Kits catalog. I am including five sample photos here.

This makes for a nice package. The shapes and sizes look good to the few drawings of the aircraft, but of course there isn’t much to compare to as it barely got by the concept stage. The resin parts are very well cast with not a bubble in sight. The wing assembly could use some pins added to strengthen the joints and help with alignment, which are only butt joints out of the box, but they can be added by the modeler. Not unusual when dealing with a resin kit. My only niggle is the two part wheels, as it is always a pain dealing with the seam, but can be dealt with.

Highly recommended for Luft ’46 fans as I doubt we will see an injection-molded kit any time soon.

For LEM Kits, check out their website. Note: As they are based in Kyiv, Ukraine I don’t know what their situation is right now. I hope everything turns out to be ok.