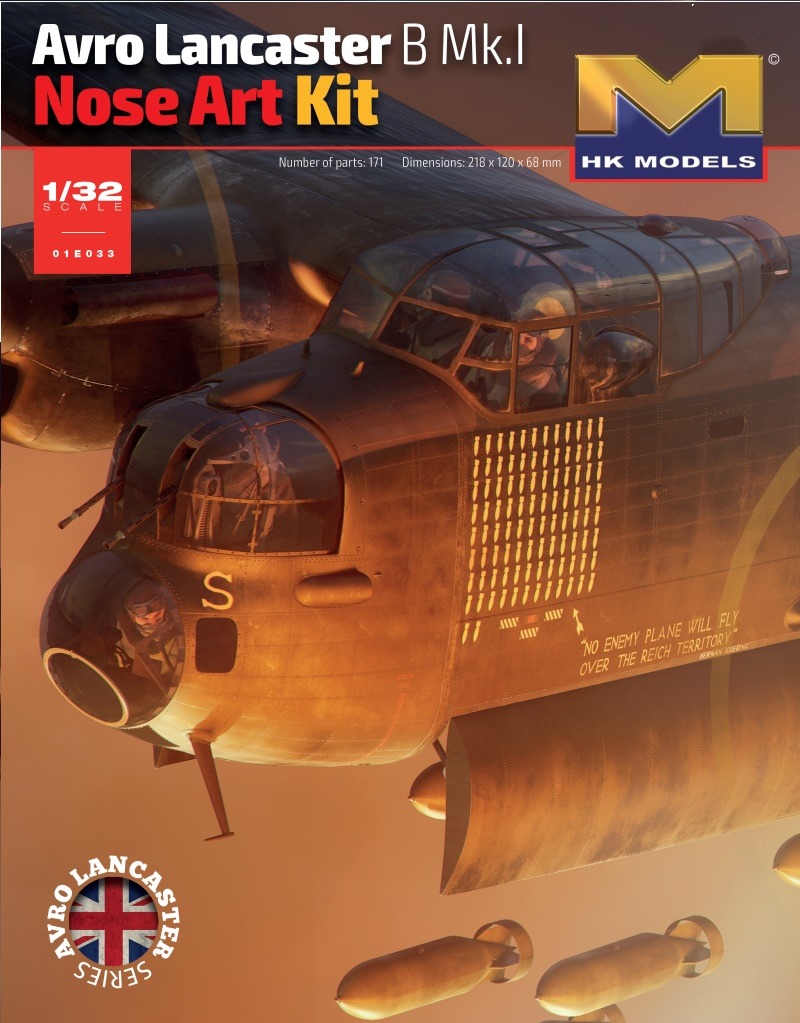 This surprise new release from HK Models is based on the company's full Lancaster B Mk I kit (01E010ED), and comprises only those sprues that make up the nose section of the aircraft. Many readers will remember that Wingnut Wings had announced just such an adaptation of its own impending Lancaster kit before that company's untimely demise. This kit steps in and fills that gap nicely, in what HK Models is calling a Nose Art Kit.

Despite consisting of only the cockpit section of the aircraft, this kit still packs in 171 parts across 12 sprues—nine in standard grey plastic, and three in clear styrene.

The only new addition to the kit plastic, as far as I can ascertain, is Sprue Gg, which contains parts for a display dolly for the finished assembly: 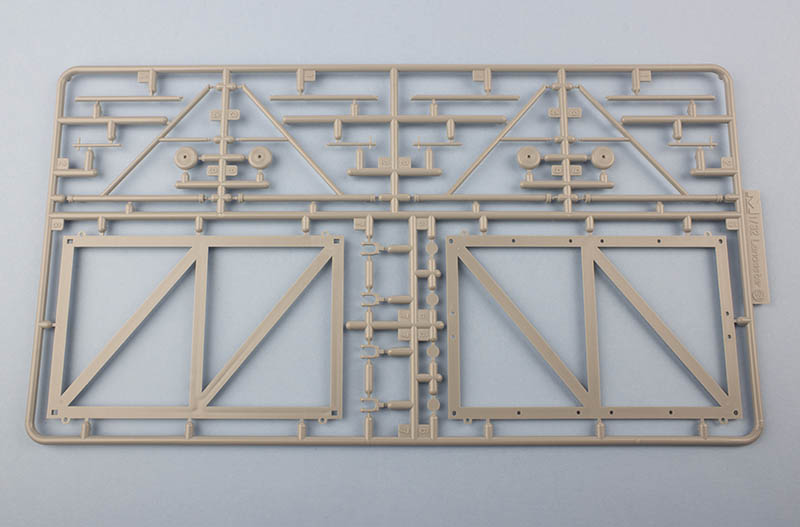 A CAD rendering shows what the finished arrangement should look like: 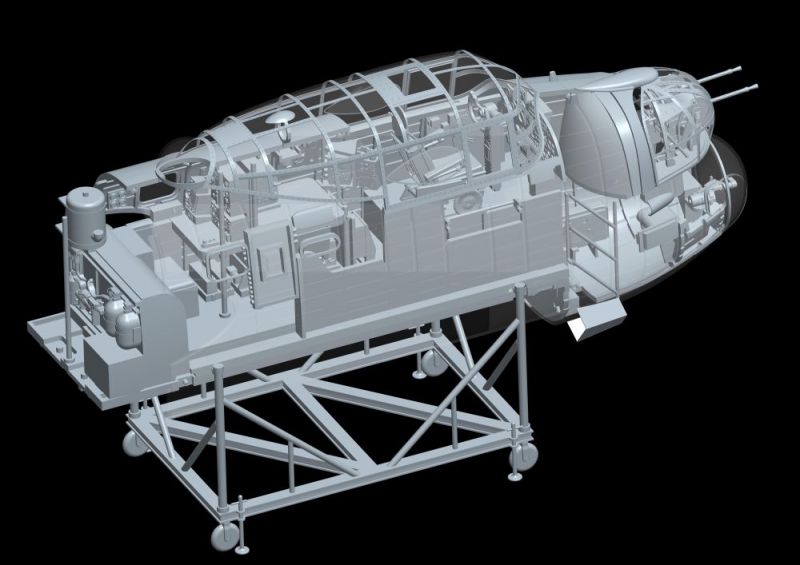 There's some lovely detail moulded in to the kit parts: 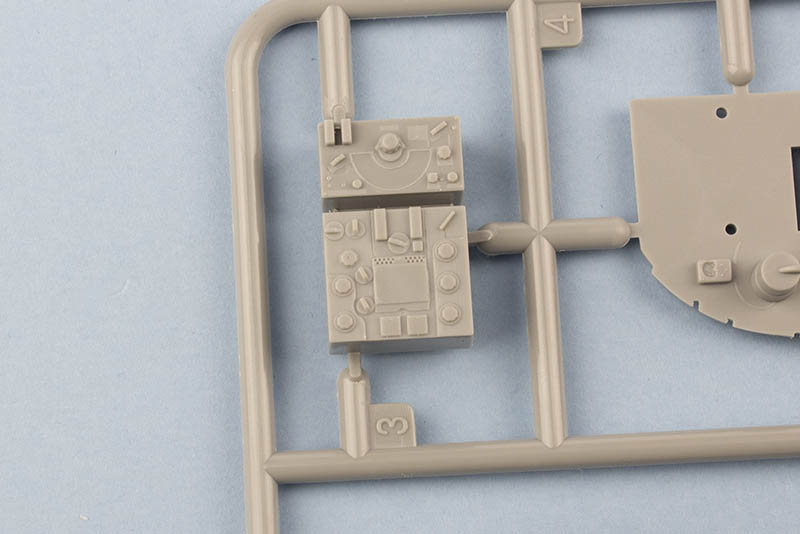 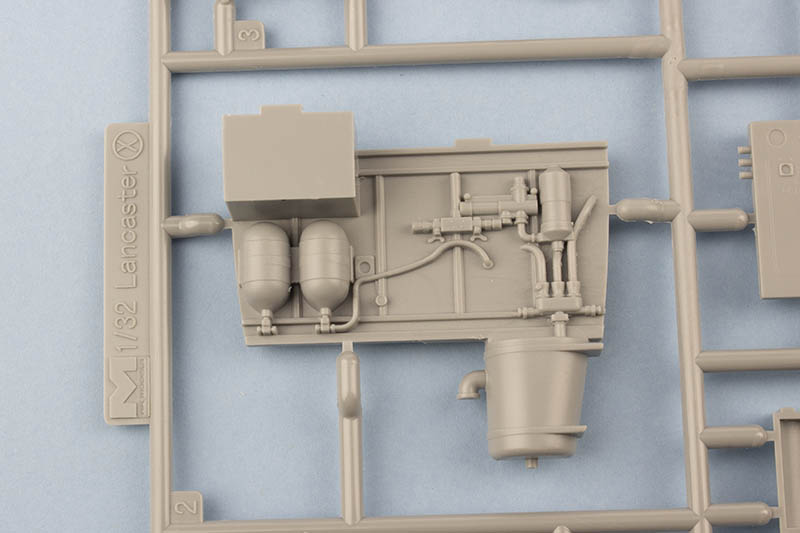 As noted previously, there are three clear sprues in the kit. Along with the expected canopy and turret parts, there's a small fret containing two small clear windows.

The main canopy—arguably the centrepiece of the entire kit—is crisply moulded, crystal clear, and free of any obvious distortions: 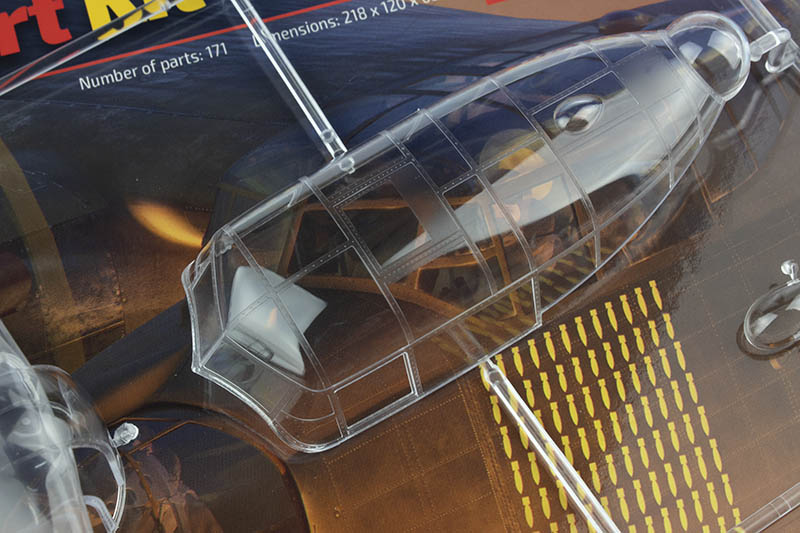 Note that the side blisters for the pilots' positions are separate pieces that attach to the flat panels on the canopy itself. This approach may not please everyone, but certainly makes it easy to leave them off if you're representing an aircraft that didn't have them fitted.

The third clear sprue isn't really a sprue at all, but a duplicate of the starboard fuselage half in clear plastic—just as was found in the limited edition version of the full kit. 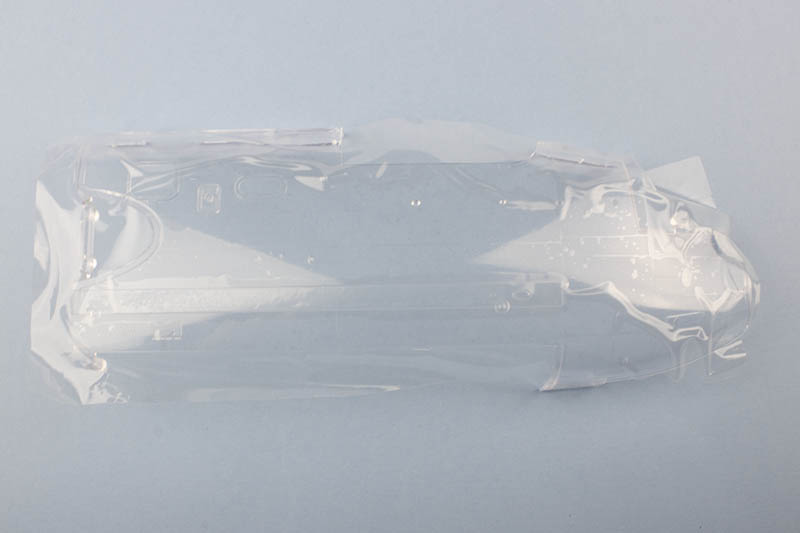 The part itself is protected by a clear plastic film, but is actually devoid of almost all the surface detail (rivets, etc) found on the standard parts. Presumably the reason that only the starboard half is included as a clear part is due to most nose art being found on the port side. Oddly, it's not shown in the parts map in the instruction manual.

It's certainly nice to have the option of exposing all that cockpit detail on at least one side, while being able to retain significant markings on the other. And of course, you can always use the opaque parts for both sides for a more traditional presentation.

A small fret of photo-etched parts is included. It contains mostly seat belts, along with a handful of internal detail parts. 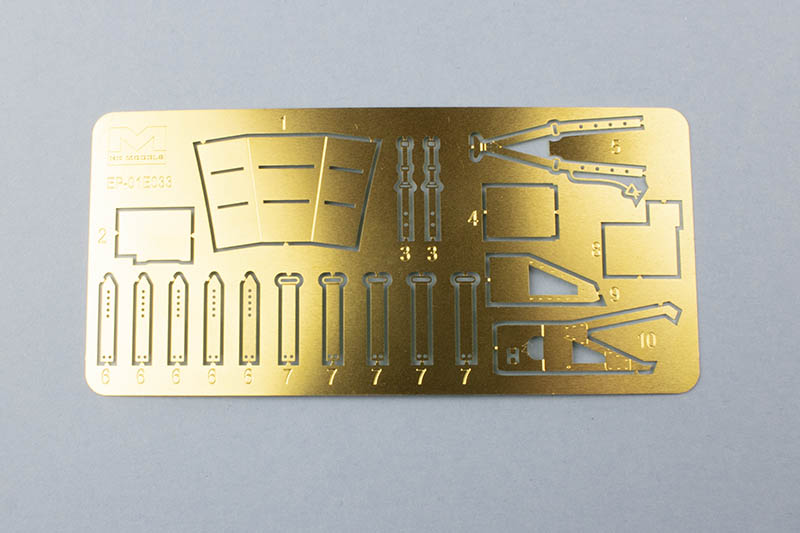 It's nice to have the seat belt option included in the, but I'll likely opt for an aftermarket set when the time comes.

This kit has some obvious constraints when it comes to the camouflage and markings options included, and given the nature of the kit—and indeed the branding itself—it's no surprise that the focus of the included decal sheet is on the nose art. 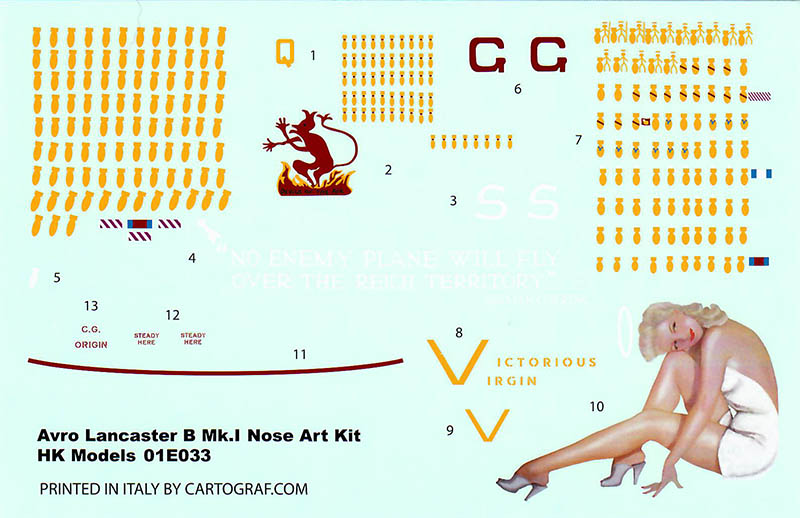 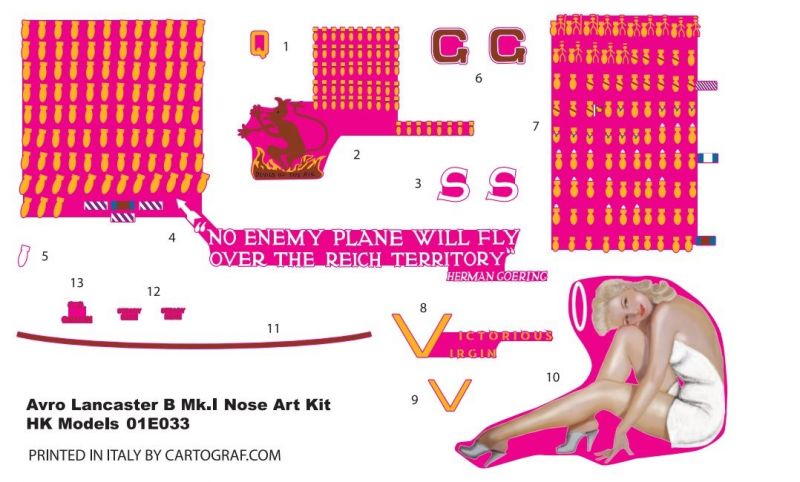 The decals themselves are printed by Cartograf, and are of the expected excellent quality. 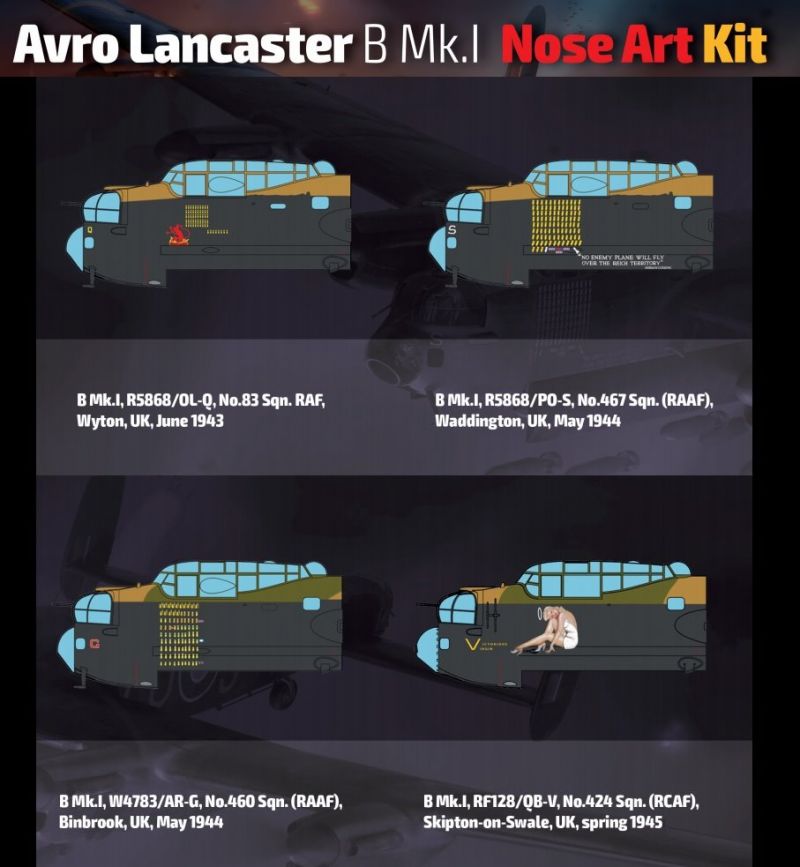 Note that there are no decals included for the instrument panel, or any of the other cockpit instrumentation, so you'll need to either source these from the aftermarket, or become handy with a paint brush.

The instruction manual is in the typical format found in HK Models kits, but printed on noticeably heavier stock than usual. It consists of a mere 12 A4 pages, stapled at the spine. 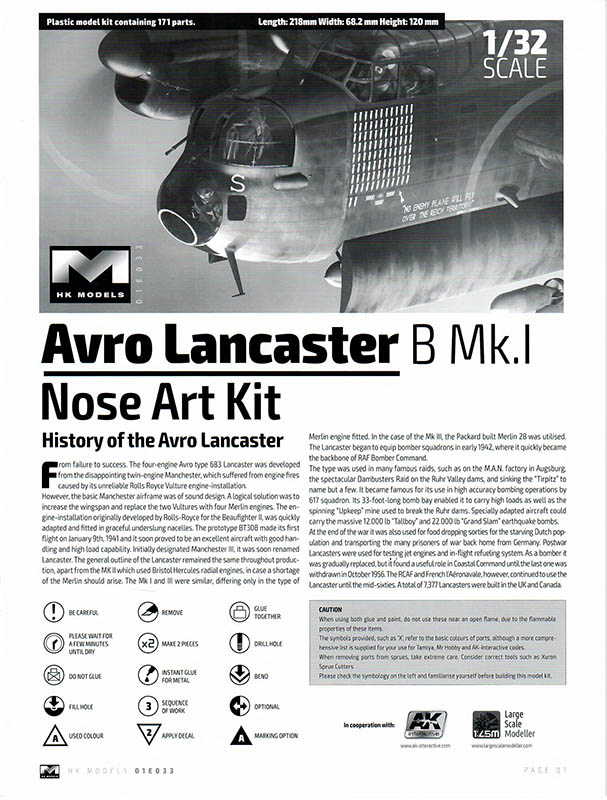 Assembly is spelled out with the usual exploded diagrams, and colour call-outs are keyed to a painting guide on page 11. There's no colour printing, which seems a little off the pace these days, but hardly a problem. 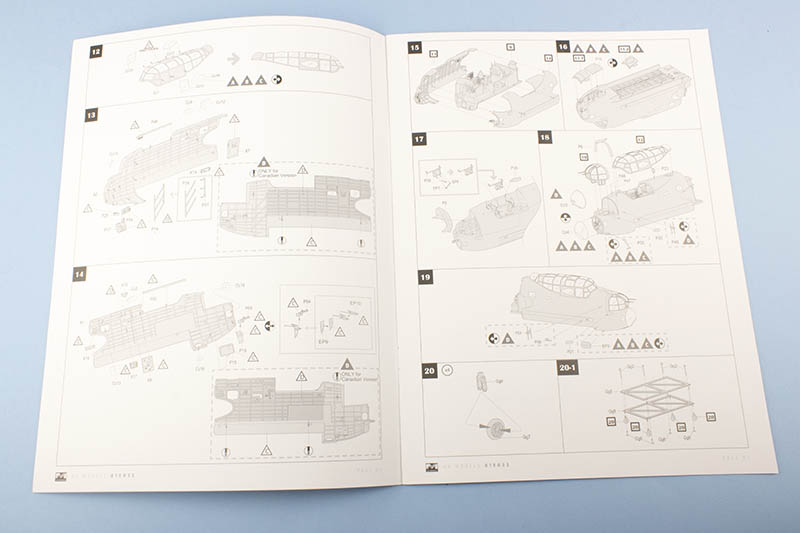 Optional parts are also denoted where appropriate for the different aircraft depicted on the decal sheet.

This is no doubt a bold release on the part of HK Models, and is probably set to divide audiences everywhere. But many modellers will likely be attracted to its compact format and affordable price, along with the opportunity to have something a little different on their display shelves.

The kit itself will be familiar to anyone who has already bought or built the full Lancaster kit upon which it's based. It will build up quite nicely straight out of the box, but also allows for superdetailers to not only go to town, but for that work to be have the highest possible exposure. My only criticism is that no decals are included for the instrument panel, which is a bit of an oversight given the nature of the beast.

Whether you think that Wingnut Wings would have done it better is a moot point at this stage, and I for one am really looking forward to tackling mine.

Many thanks to HK Models for the review sample.