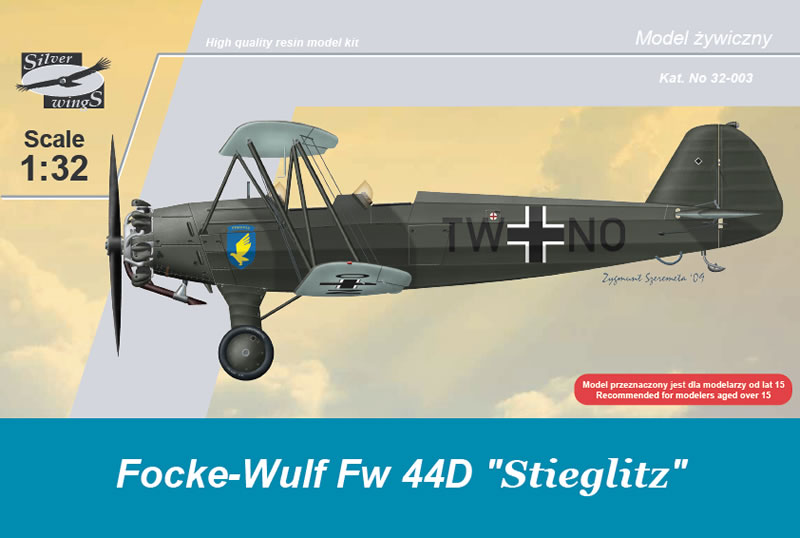 Polish kit manufacturer Silver Wings has an enviable reputation for producing superb resin kits of neglected between-the-wars aircraft, and this release - the Focke-Wulf Fw 44D in 1/32 - continues that tradition. (For a potted history of the Fw 44, check out the relevant Wikipedia article.) As it happens, the Fw 44 soldiered on for the duration of WW2, and was used by many air forces, giving an excellent opportunity for a wide range of marking possibilities.

The kit comes in small but sturdy cardboard box of the traditional variety - no end-opening nonsense here! Being a resin kit, there are no sprues inside, but instead a series of re-sealable plastic bags containing all the kit parts, which themselves are protected by bubble wrap bags. As you can see from the photos below, many of the parts are small and delicate, so kudos to Silver Wings for taking the appropriate care in the their packaging. 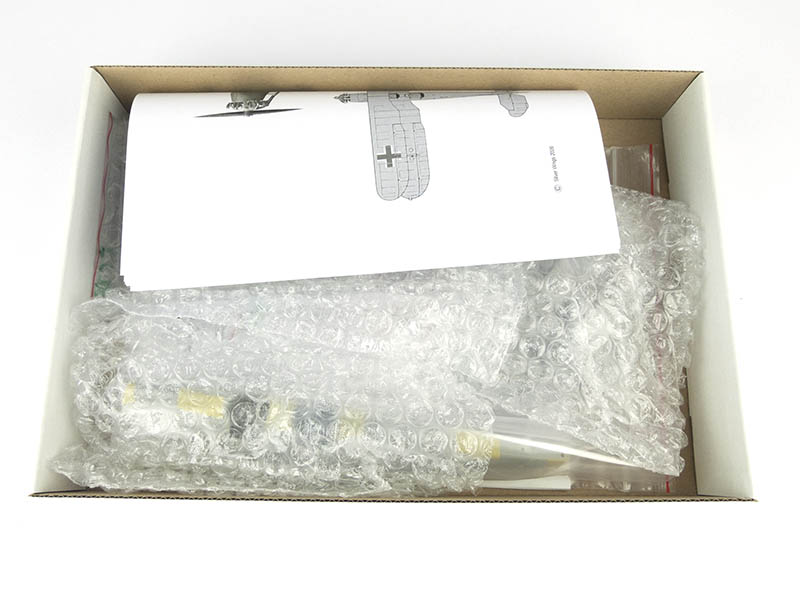 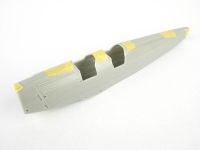 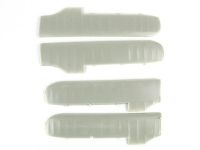 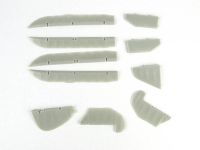 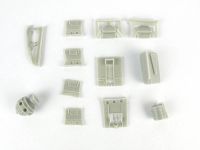 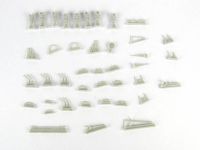 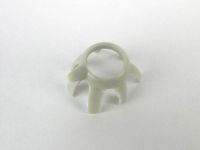 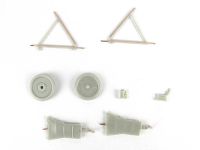 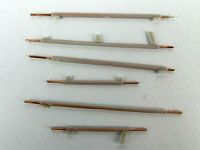 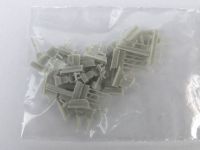 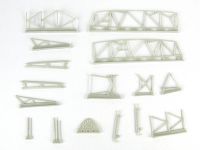 The kit's resin components are packed in 11 re-sealable plastic bags, and look very crisply cast indeed. The casting appears to be excellent. There are no pin holes, air bubbles or casting flaws to be seen anywhere. Detail is terrific, being subtle and appropriate.

The only notable issue is that the resin struts and braces are reinforced with brass wire, but the brass appears to be exposed in a couple of parts, so this will require checking on a per-sample basis, along with the requisite remedial work.

Two nicely moulded seats are included, though the upper support bar was broken on one of the ones in my sample: 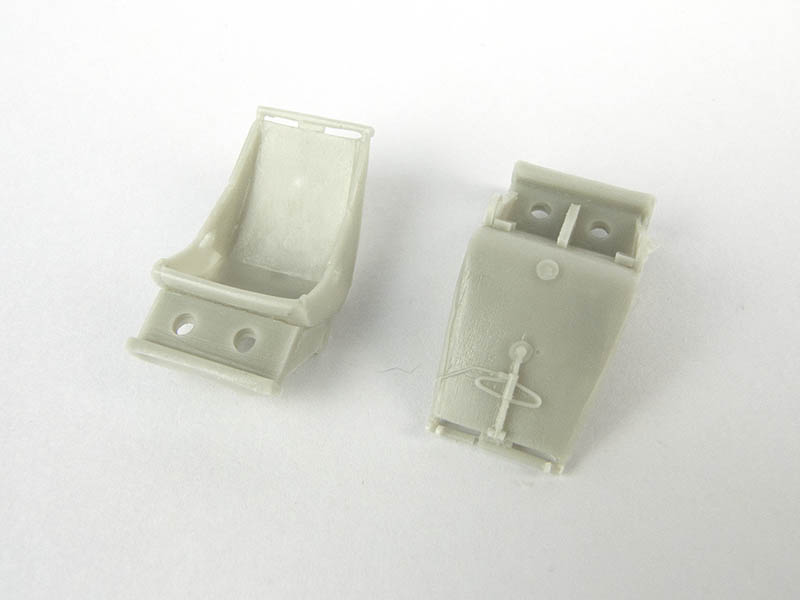 The surface detailing is crisp and quite convincing: 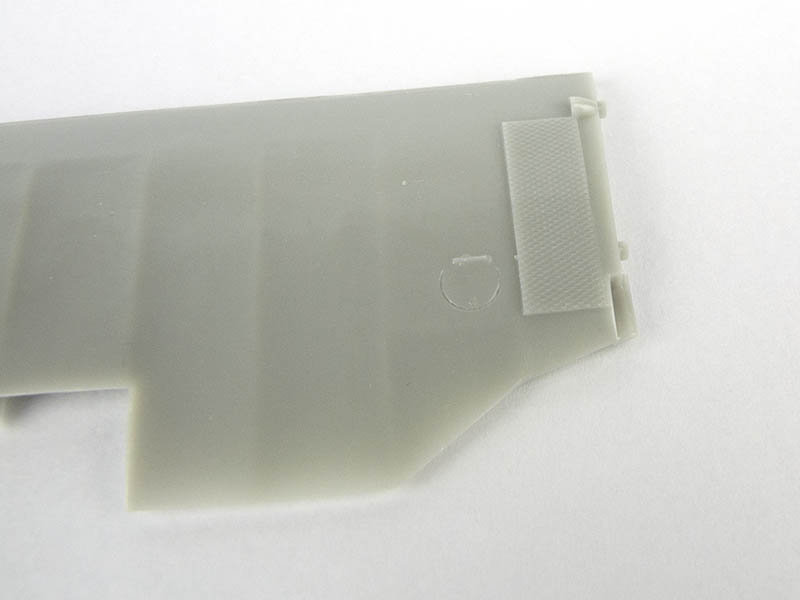 The leading edges of the wings are a little rough, and will need some attention with a sanding sponge to get them ready for paint: 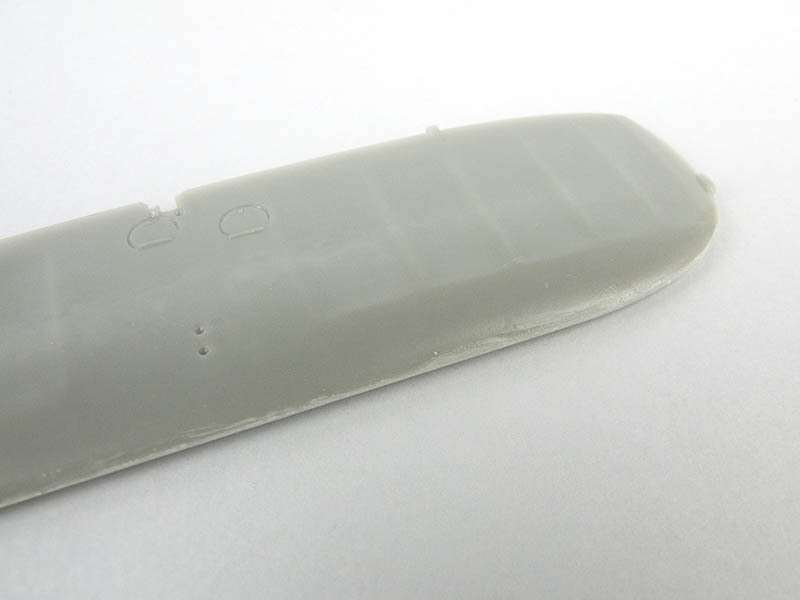 There are also some scars along the fuselage joins from the pre-removed casting blocks, which will need some attention once the parts have been joined: 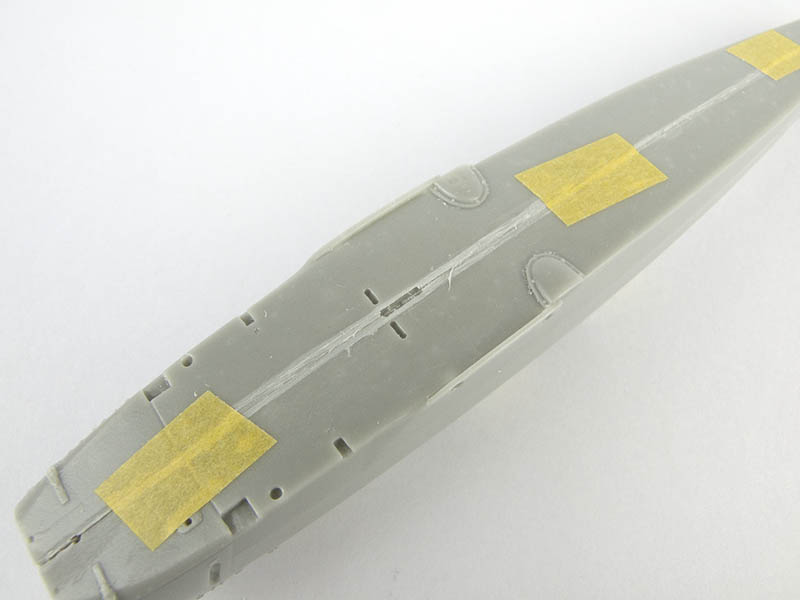 The insides of the fuselage feature some serviceable sidewall detailing, which is designed to be augmented by the separate cockpit framing: 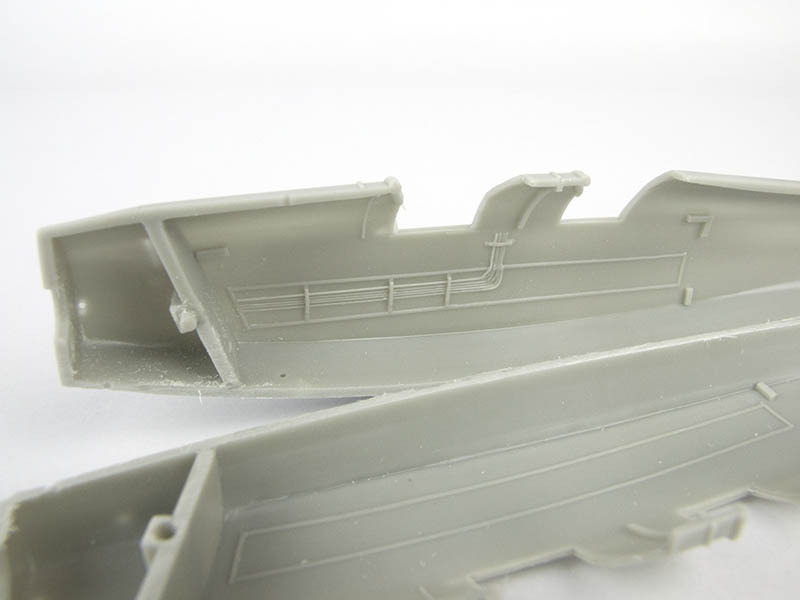 Note also the forward internal bulkhead, which not only provides additional structural strength, but also features a locating pin and corresponding hole to lock in the alignment of the two fuselage halves. There's another one at the rear, and I can attest that they achieve their intended goals admirably.

The propeller is in good shape, but will require a little bit of clean-up work at the pour stub attachment point: 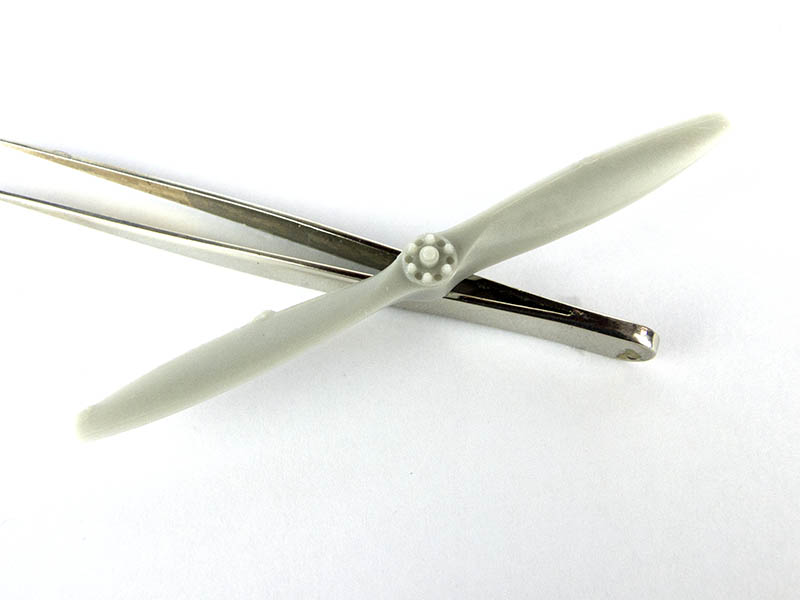 The engine exhaust pipe is nicely hollowed-out at the end: 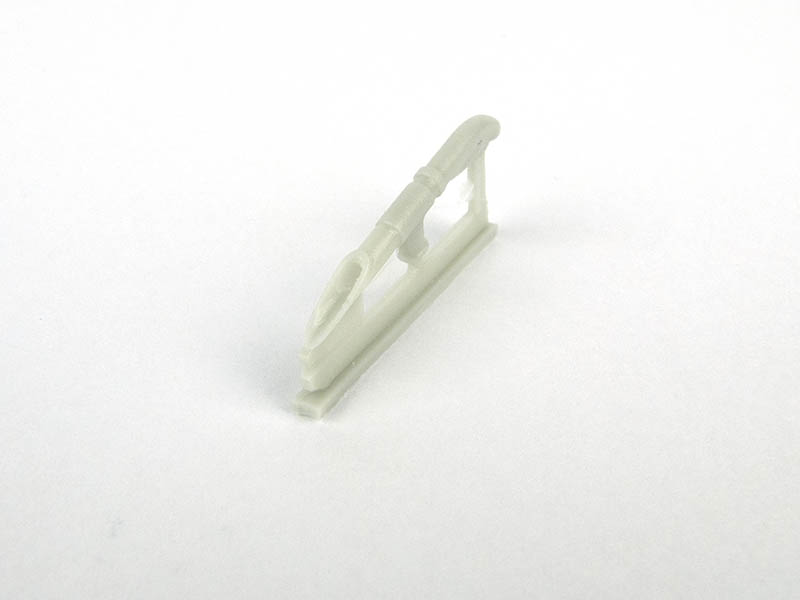 The two clear windscreen parts are supplied in clear resin, and they are thin, crisply moulded, and beautifully clear: 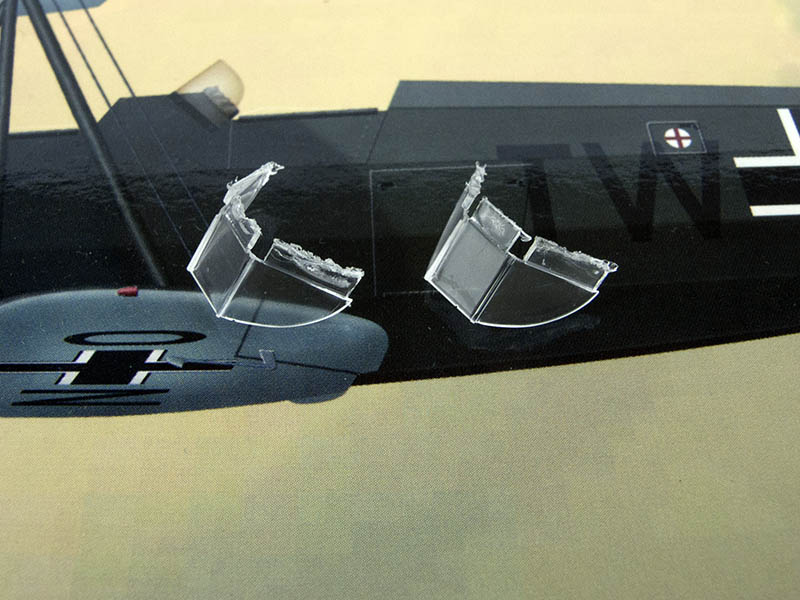 The principal challenge with these two parts will be ensuring a trouble-free removal of the extraneous casting material, along with achieving a good fit of the windscreens to the airframe.

As a relatively early release from Silver Wings, the main markings are supplied as paint masks: 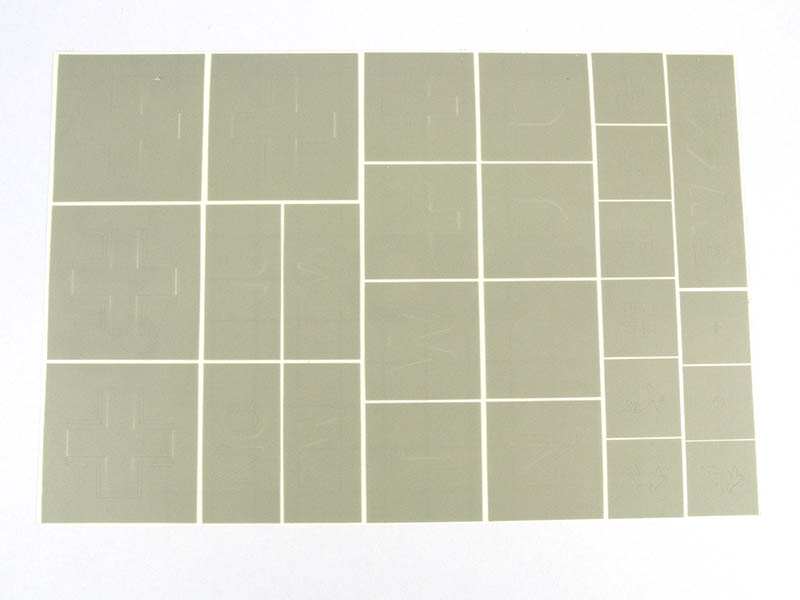 Only one scheme is supplied, which is TW+NO, listed as "FFS A/B 112, WWII period, based at Nellingen". It's a relatively plain RLM 70 over RLM 64 scheme.

A single, tiny decal sheet is included that simply houses two examples of the FFSCH112 on continuous decal film: 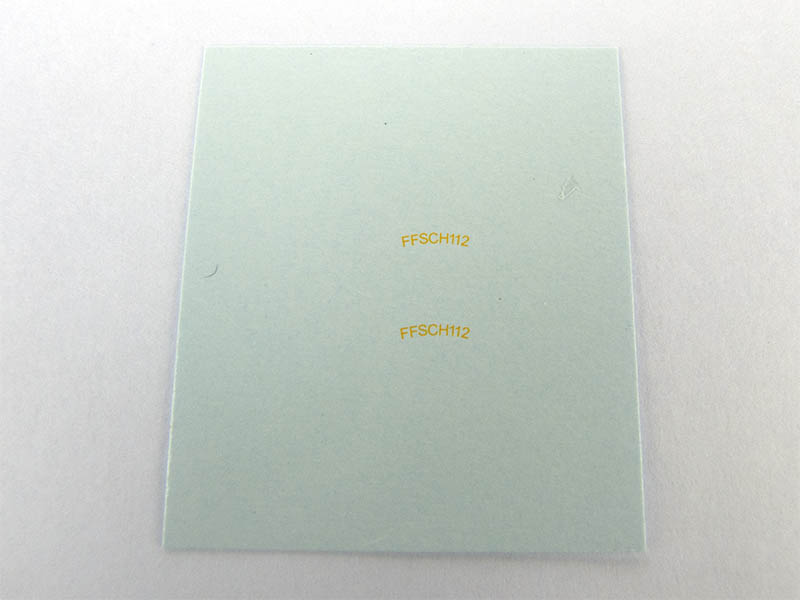 Unfortunately the instructions give no indication about the placement of these two decals. It's also difficult to determine exactly what's what on the masking sheet, so I'm unable to confirm if all the elements for the squadron crest are included, or if it was featured on both sides of the aircraft. Certainly, the first aid marking on the colour profile will need to be sourced elsewhere.

Also included is a small sheet of clear acetate, upon which the main cockpit instrument panels are printed in black. You'll need to paint the rear of the design in white in order to make the instrument dials stand out, as they're transparent as given. 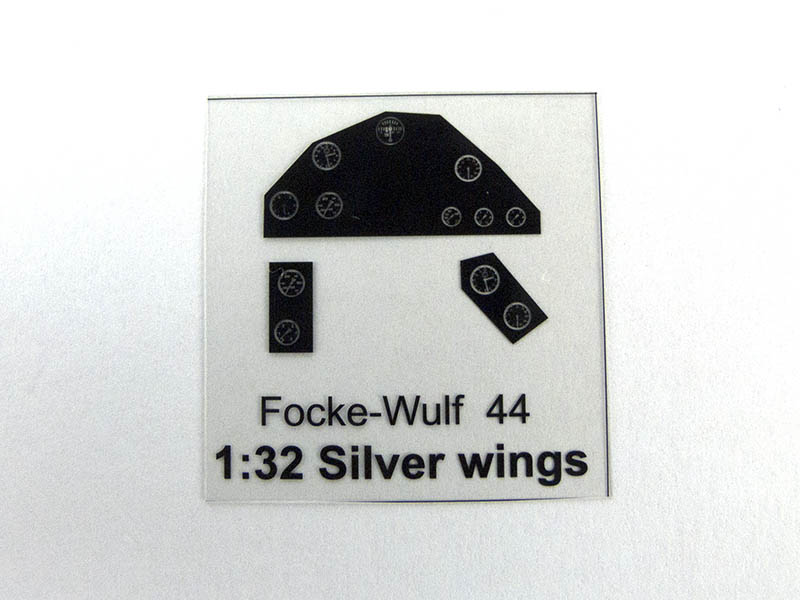 Being an older kit from Silver Wings, the instructions have a slightly more home-made feel about them than the company's newer releases, but they're still eminently usable. The style consists of exploded isometric drawings of the traditional kind, and notes and colour call-outs are included where appropriate. 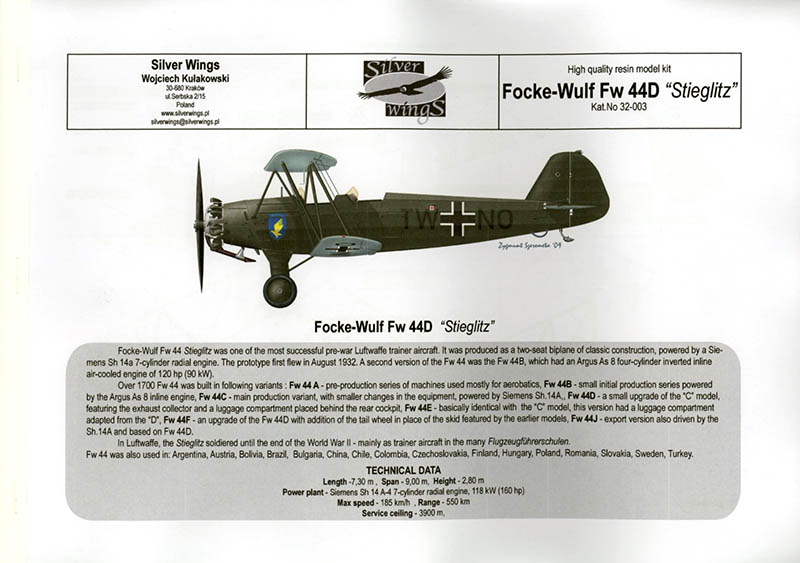 They're printed on heavy matt A4 paper stock, and stapled and bound at the left edge.

Silver Wings kits have always been good, but this early release betrays its age in subtle ways. The resin parts are as good as we've come to expect, but there's no photo-etched fret included, and no decals for the less experienced modeller. The instruction manual also lacks the polish of the company's more recent efforts.

That said, this is still a very decent and eminently buildable kit of an important pre-war training aircraft. The omissions outlined above simply orient the kit towards more experienced modellers, but this is the de facto target market for resin kits of this nature anyway.

I wouldn't recommend this kit to beginning modellers, or as your first resin kit, but if you have the requisite experience, and are interested in the Fw 44 as a subject, I have no hesitation in commending this kit to your attention.

Many thanks to HobbyLink Japan for the review kit, which can be purchased at the following link: