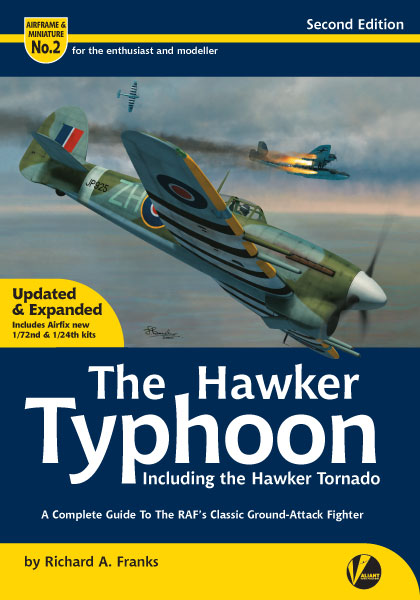 This latest in the Airframe & Miniature series from Valiant Wings Publishing is actually a second edition reprint of No. 2 in the series, The Hawker Typhoon: A Complete Guide to the RAF's Classic Ground-Attack Fighter. Written as usual by Richard Franks, it tells the tale of the Hawker Typhoon, and its Tornado progenitor, over 176 luxurious pages.

The Airframe section starts off with a four-chapter summary of each variant produced, from the initial Tornado prototypes through the to final production Typhoons, and the initial Tempest prototypes. This is a very handy primer on not only the sequence in which the variants were produced, but the defining differences between them. Each variant is illustrated with a port-side profile, neatly rendered in black, white, and grey.

Chapter 5 kicks off a discussion of Typhoon camouflage and markings, including breakdowns of the different styles of national insignia and squadron codes used.

Chapter 6 details the interesting history of the last complete surviving Typhoon, built during 1944 and currently on display at the Canada Aviation and Space Museum in Ottawa. A brief list of other Typhoon sections and replicas is also included.

Page 44 kicks off a seven-page section of colour profiles. These are by Richard Caruana, and are gorgeous, taking full advantage of the quality glossy paper used throughout. 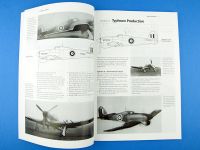 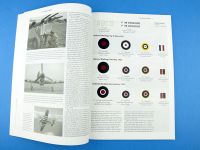 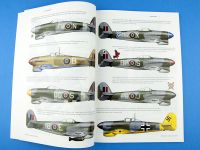 This section is introduced with chapter 7, a detailed look at applicable Typhoon kits. All the major scales are covered, from 1/72 to 1/24, though the Crown (now Revell) 1/144 kit is not mentioned (though it, along with other oddities, is mentioned in Appendix I). The Airfix 1/24 Typhoon kit has been included as part of the second edition update. In 1/32 scale, the MDC and Revell kits are looked at in some detail.

Each build article varies in the amount of detail it provides about the build itself, but the resultant models are uniformly excellent. If I had to quibble, I feel the Dark Green used on the Airfix 1/72 build by Steve Evans is too bright, and some of the weathering effects employed by Dani Zamarbide on the same company's 1/24 scale kit are a bit overdone for my tastes. These assessments are of course both subjective and personal, and in no way detract from either the build articles concerned or the models they depict. 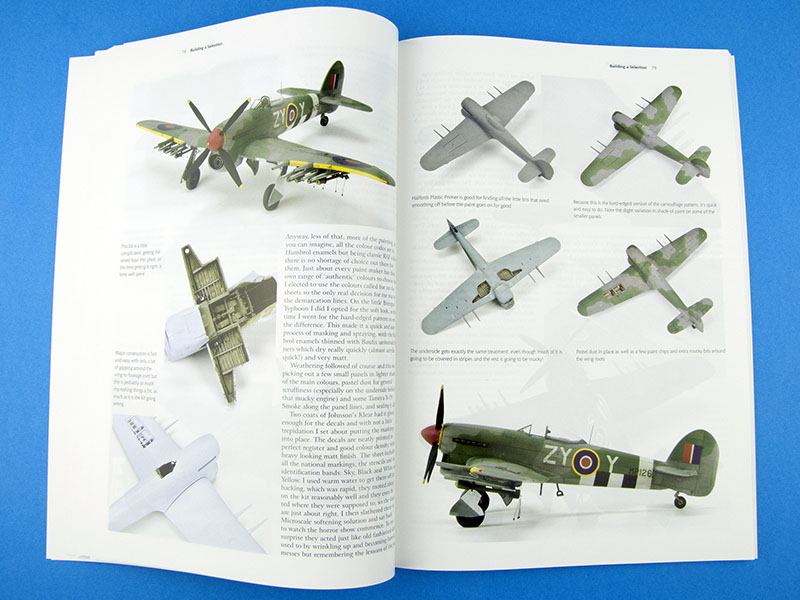 One of the most interesting sections to me is chapter 9, "Building a Collection". Through a series of isometric 3-D drawings by Jacek Jackiewicz, this section illustrates the pertinent features of each revision of the airframe as it progressed through its development. When combined with the information presented in the first part of the Airframe section, it becomes a simple matter to understand the features present on any particular variant or sub-variant. In fact, this section could easily have been included in the Airframe portion of the book, rather than the Miniature section. 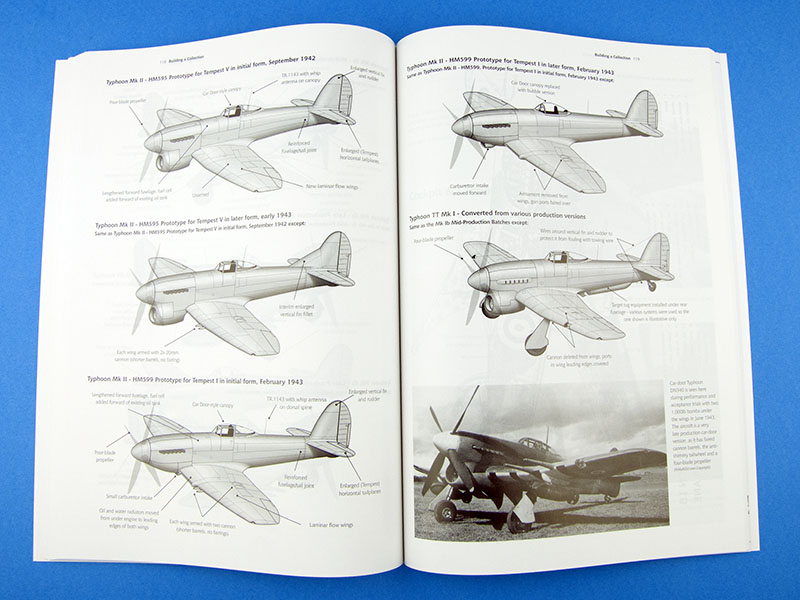 Chapter 10, "In Detail", features a series of close-up photographs and technical drawings to reveal those airframe details so often sought after by modellers. Many of the photographs are of restored airframes, so the usual caveats regarding those apply here, but they're useful nonetheless.

Included in this chapter is an interesting section about the debate surrounding the shape of the cowling on late-model Typhoons. There has been some conjecture that this shape was revised to resemble that seen on the Tempest V. I won't give away the author's conclusions, but it makes for an interesting read. 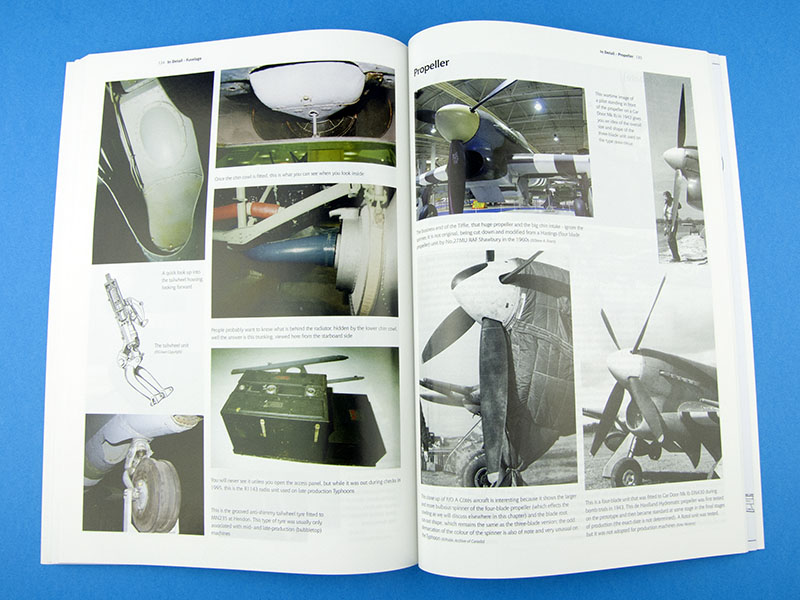 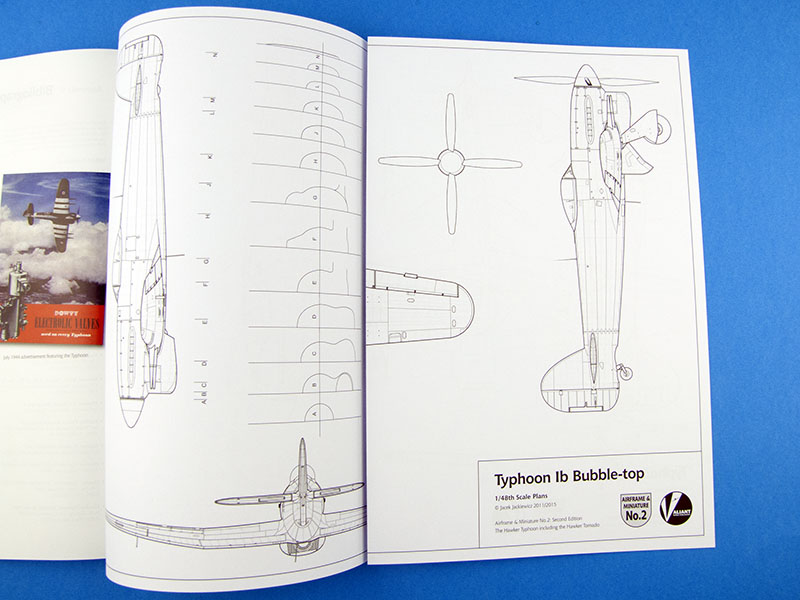 While I can't vouch for the accuracy of any of the included content in this title, it does at first glance appear to be exhaustively researched. The production values are first class, and the contents explore the book's stated remit—airframe and miniature—in extensive detail. There are certainly fewer typos than I've noticed in previous releases, which is good to see, but the author still suffers from the persistent habit of using a question mark to end statements he's uncertain about, rather than rephrasing the sentence as an actual question.

Minor grammatical niggles aside, this volume is packed with a wealth of information and detail about the Hawker Typhoon, is lavishly produced, and should serve as a handy one-stop reference for the type. Recommended!

Kevin Williams has written a review of the first edition.