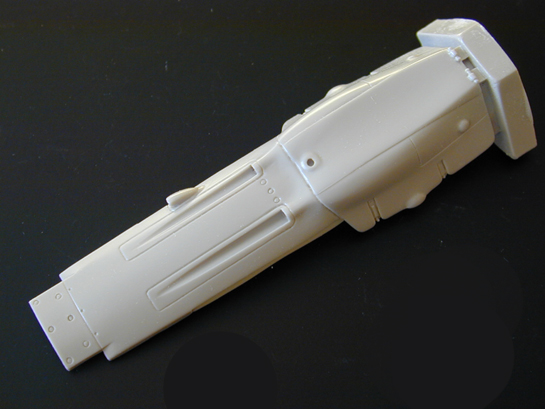 Eagle Editions has released a new and improved 5 piece gun cowling for the Hasegawa Fw 190D-9 in 1/32nd scale.

This new cowling is cast in gray resin as a single unit unlike their earlier two-piece release. This results from comments that that gap in the earlier cowling between the rear hood and forward cowling was slightly excessive. While the gap is large on the actual aircraft, Eagle Editions decided to address customer demands with this new set. Surface detail is recessed and the entire cowling appears to be crisply cast with no flash evident.

Detailed instructions are provided, though this modification is really quite simple. A large casting block needs to be removed from the rear of the cowling. Depending upon the scheme the modeler chooses applicable bumps will also have to be sanded off the cowling.

Modelers should be aware of the style of gun cowlings that suit their needs. Three and five piece cowlings were fitted to the Fw 190D-9. References should be checked carefully. Eagle Editions also identifies which cowling is required with their 1/32nd scale decal instruction sheets.

This is a very simple modification that will have a dramatic effect upon the appearance of the finished model. Sadly, the cowling on the D-9 is one area that manufacturers continue to struggle with. They continually provide too much cleavage for the upper area of the gun hood. Eagle Edition addresses this oversight and I recommend this set without reservation.