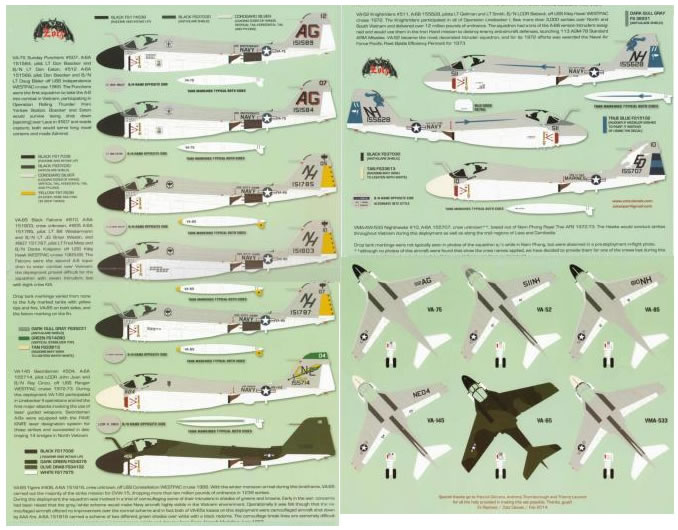 Have just received a set of Zotz sheet ZTZ32/061, Zotz Presents Grumman A-6A Intruder in the Vietnam War. In fact, that’s a misnomer as it actually includes options for no fewer than eight A-6As and one A-6B ‘Iron Hand’ Intruder!

On opening the heavily-laden clip-bag one is immediately struck with the quality and weight of its contents: three sheets printed in perfect register in a silk finish, which laid end-to-end works out as a roller-blind length of 24.5cm by 57cm long! (That’s approximately 9½ inches wide by 22½ inches long). And that’s not counting the instruction sheets, comprising no fewer than seven 19 x 24 cm pages (7 ½ x 9 ½ inches), one them being a centrefold spread of seven of the nine markings options.

For those of you taking part in, or contemplating an A-6 Intruder build in LSP’s Vietnam Air War Group Build, this is a must-have sheet. The otherwise superb Trumpeter A-6A kit’s only real failing is its hastily-designed decals, including some comical interpretations of stencil data (‘KALKRAY’ instead of WALKWAY) and absence of a great deal of highly visible data. Given the sheer size of the beast, the Zotz sheet not only provides comprehensive decal replacements, but additional data not found in the kit, and the very subtle stuff really capable of lifting the finished look. Enough for a whole Intruder. These will really enhance those vast areas of light gull and white. Moreover, National Insignia of the correct size and dark gull grey walkways are also included, making those bits a breeze.

Covered on the sheet are colourful authentic options for eight light gull grey over white schemes and one camouflaged:

Regarding the Attack Squadrons and Marine unit represented, only VA-145 Swordsmen is repeated from the two options in the kit, and offers far greater finesse; crew names for a jet that was utilised both for PAVE Knife laser bombing and dropping of normal ironmongery. As well as accurate Squadron regalia, aircrew – and in some cases – plane captain names are also provided, along with bomb and missile mission markings, adding considerable flourish and wartime ‘realism’ to any completed model.

Significantly also, the instruction sheets include suggestions as to modifications and changes required (most of the simple cutting-off or filling-in variety) to render your Intruder more accurate, such that you will feel confident to display your finished model without the nit-picking brigade unravelling your work. The research is already in the bag! 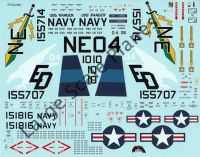 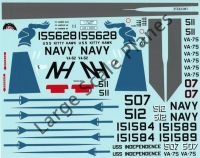 Although I will profess to playing a tiny part in this sheet’s evolution, it is really the very hard work of Patrick Gilmore and Thierry Laurent and the man behind Zotz, Eli Raphael. Hat off to Eli who really deserves this sheet to do well, as he has other Vietnam War era concepts in the making.