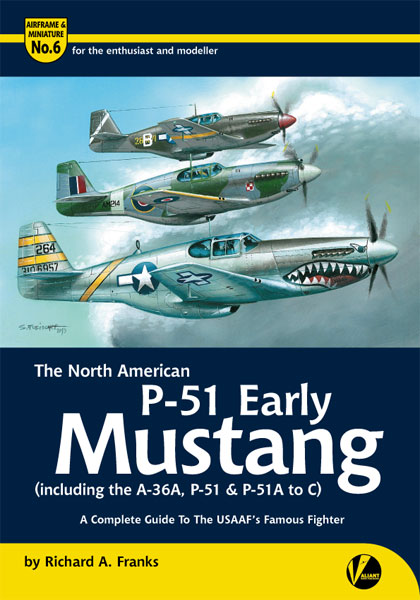 UK publisher Valiant Wings Publishing has released Number 6 in its Airframe & Miniature series, with the rather lengthy title of The North American P-51 Early Mustang (including the A-36A, P-51 & P-51A to C): A Complete Guide to The USAAF's Famous Fighter. Phew! The author is Richard Franks, and the illustrations are shared between Richard Caruana and Jacek Jackiewicz.

The first thing that struck me when I picked up this book was how heavy it is; at 192 pages plus a gatefold section of scale drawings, it is indeed a weighty tome. It's extremely well printed on quality glossy paper, and the reproduction of all drawings and photographs is first-class.

The photos below should give a good indication of the nature and style of the book's contents: 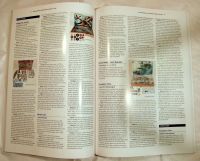 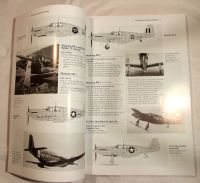 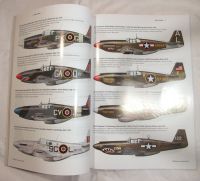 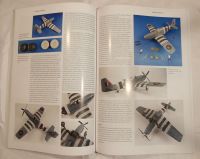 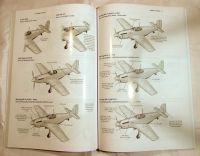 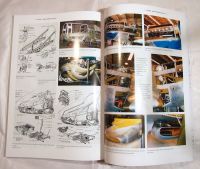 The drawings by Jacek Jackiewicz depicting the evolution of the airframe span 22 pages, and consist of crisply-rendered, concisely-labelled isometric 3D images. They are clear and easy to follow, and form a handy guide for discerning what features distinguished which variants.

The colour profiles are by Richard Caruana, and cover 8 pages in all. The artwork is very well done, and a broad range of US and foreign schemes is represented.

The modelling section features several kit builds in 1/72 and 1/48 scales, but sadly nothing in 1/32 (the book itself notes that this was due to time and space constraints). Even so, the builds are extremely well done, and will serve as inspiration and guidance for our own early Mustang builds when we get to them. Fortunately the kits, accessories and decals lists do include 1/32 scale items, and seem quite comprehensive.

At the very back of the book, secured inside the rear cover, is a set of 1/48 scale early Mustang plans in gatefold format. These are printed on heavy, non-glossy plain stock, and feature the following airframes:

These are drawn by Jacek Jackiewicz and look very nicely done, and include comprehensive rivet details. 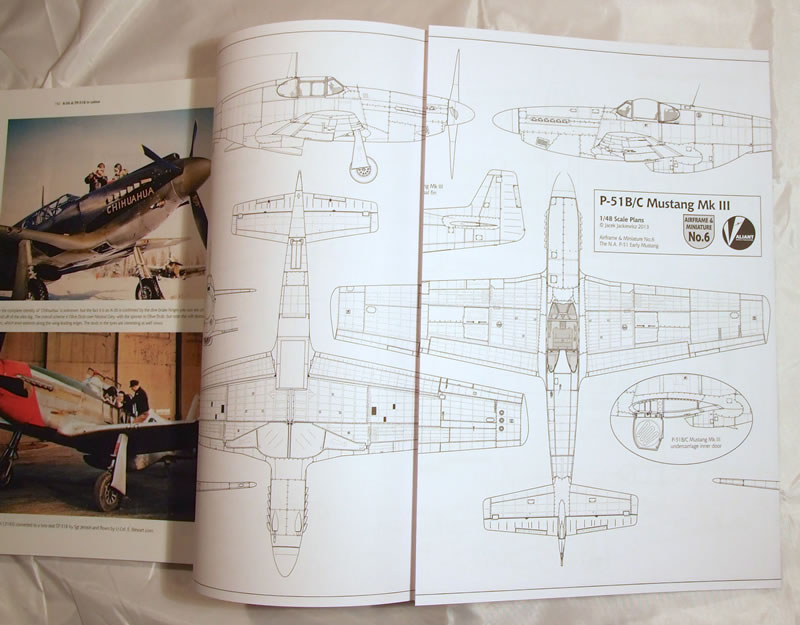 Not being a Mustang expert, I can't give a considered evaluation of the accuracy or veracity of the text itself, and so will leave that to more knowledgeable readers. All other elements of the book ooze quality however, from the clear photography to the beautiful profiles and the detailed scale plans. Contemporary photographs are plentiful and very nicely reproduced. Overall it's an impressive attempt to be the Complete Guide the title alludes to. Recommended!