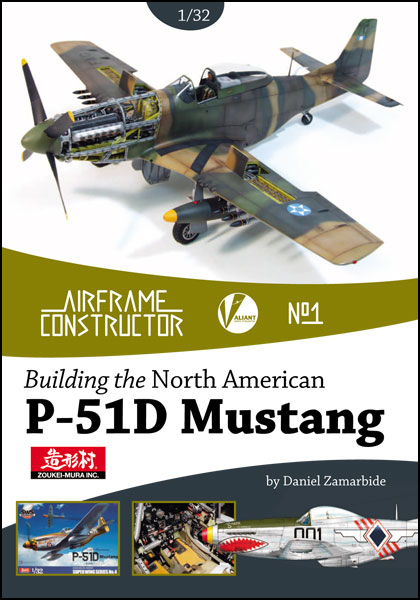 Over its 64 pages the book combines a detailed build essay of the Zoukei-Mura 1/32 P-51D Mustang kit with historical information, modelling tips for natural metal finishes, colour profiles, walkarounds and a brief listing of some aftermarket items.

The book begins with a section that is curiously labelled Preface, when it is in fact a 7-page history of the Mustang, including a comprehensive list of all the countries known to have employed the P-51 in some capacity. This is in keeping with what appears to be the underlying theme of the book in focussing on non-US camouflage and markings.

The meat of the book is the 38-page build essay featuring the Zoukei-Mura 1/32 P-51D Mustang. This section begins with an overview of the steps taken during the build so that you get a clear idea of the sequence involved before launching into the details.

The Zoukei-Mura P-51D is a fine kit, and in the hands of a gifted modeller like Daniel Zamarbide, it can be turned into a masterpiece. And Daniel shows you how to do just that, step-by-step. 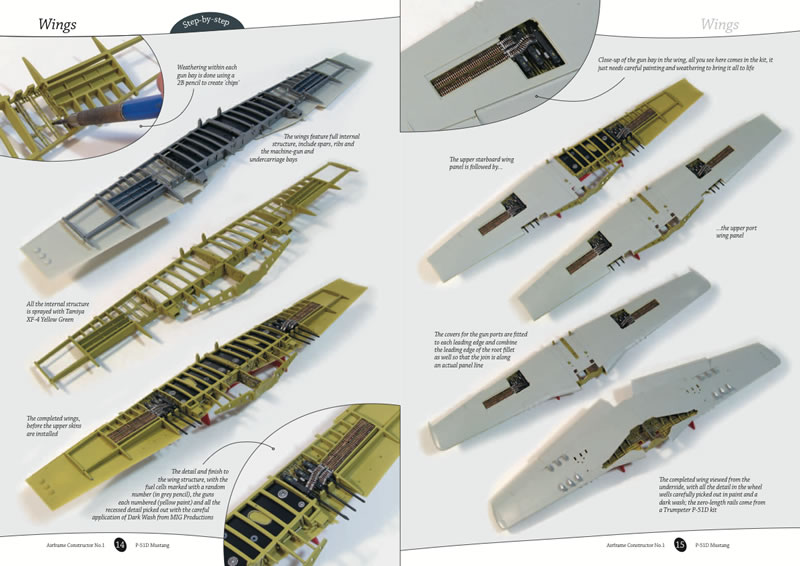 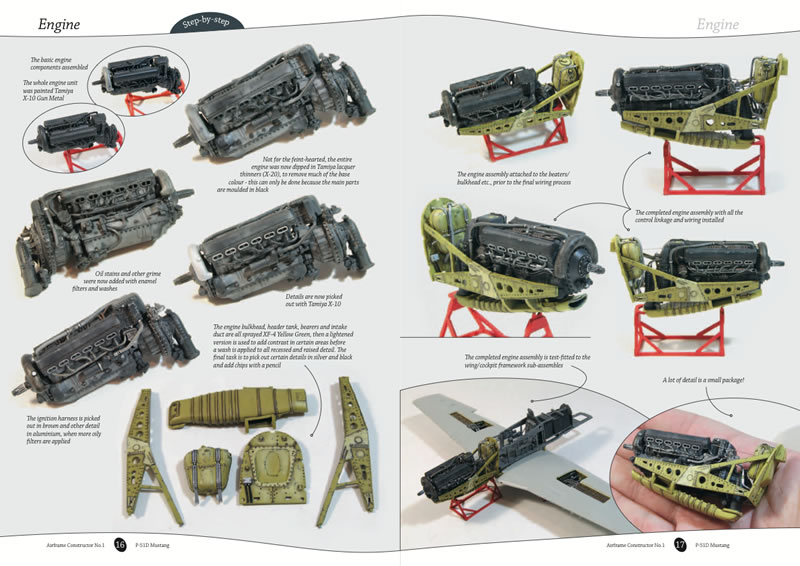 The photos are clear, though a little dark in places, and the sequence they lay out is easy to follow. Daniel does his best to detail his techniques and approach without getting too bogged down, but I would have occasionally liked a little more detail on some aspects. The text though is generally clear and concise, and specific paint colours are nominated where appropriate.

There's more than enough to chew on here to give any modeller some new ideas, and the finished model is stunning. The theme hinted at in the Preface is brought to its logical zenith here, with Daniel opting for a post-war Guatemalan machine, rather than a more usual USAAF example. The only concession to the aftermarket during the build was some resin wheels from Barracuda Studios.

The next section comprises a 4-page tutorial on conquering natural metal finishes, with an acknowledgement that that's how most modellers will ultimately finish their Mustangs. The test subject is a fuselage half from the Trumpeter P-51B kit, and the techniques shown are simple and effective. Daniel's approach to finishes is highly-stylised, belonging to what some modellers refer to as 'the Spanish school'. This approach is not to everyone's taste, but it certainly produces some eye-catching results, and there are plenty of tips here for how to achieve such a finish. And there's obviously no harm in adopting these techniques as a starting point, and then modifying them to suit your own style and tastes.

This section features 5 pages of colour profiles by Richard Caruana, the majority of which cover non-USAAF subjects (there's that theme again!). There are some really interesting and surprising examples on show, which should provide sufficient inspiration to step outside the Mustang norm should you need it. I really admire the publishers for taking the road less travelled here, and hope it sparks a wave of off-beat Mustang models in the near future.

This Walkaround section comprises 6 pages of detail photographs of various restored airframes, interspersed with drawings taken from the original NAA flight manual. While this is handy to have, it's certainly no substitute for a dedicated technical monograph on the Mustang. It's probably only valuable if you don't already have more comprehensive references on the type.

The two appendices take a quick look at some of the available aftermarket options. The first is a full-page list of decals applicable to the Zoukei-Mura kit, and seems reasonably comprehensive, though it confines itself to those sets still in production at the time of going to print.

Appendix 2 rounds out the book with a slightly promotional listing of Zoukei-Mura's own detail sets available for the kit, including photo-etched sets, metal undercarriage, figures, brass gun barrels and more. Useful if you weren't aware of their existence, but pretty much an advertorial.

The real value of books like this for me is the inspiration and motivation I can draw from them. Sure, modelling websites and forums (including LSP) are full of terrific builds by talented modellers, but it's often hard to glean information about specific techniques or approaches online. But if I can take away one clearly-explained new technique or idea from a book like this, then I feel it's worth it. And if I become motivated to try them out, or simply inspired to build better models, all the better. I think this book achieves those outcomes handsomely. Despite the odd typo that mars the text here and there, I highly recommend this book to anyone wishing to learn new techniques, improve their modelling skills or simply become inspired to build better models.

Thanks to Valiant Wings Publishing for the view sample.

This review was published on Sunday, September 29 2013; Last modified on Wednesday, February 24 2016