Here for review, we have the new Eduard-Brassin resin and PE AM replacement tire and wheel set for the 1/32nd HKM B-25H/J.

The Hong Kong Models B-25 J (glass nose) has been out for some time now and is widely accepted as a really great kit, and in fact, may be the best kit of the B-25 in any scale. This new set of weighted resin wheels and tires from Eduard will work on the previously released glass nose HK B-25, as well as the to-be-released solid nose J strafer and canon nosed H models.

Eduard has done a quality job here on the packaging. The kit comes in a nice sturdy black box, with the individual bags containing the parts nicely packed away in sponge rubber, and a nice color photo of the contents within: 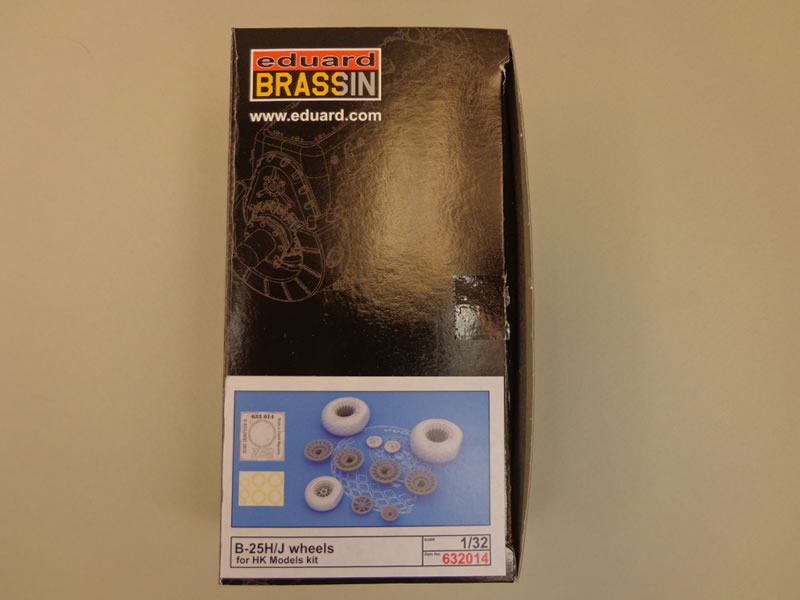 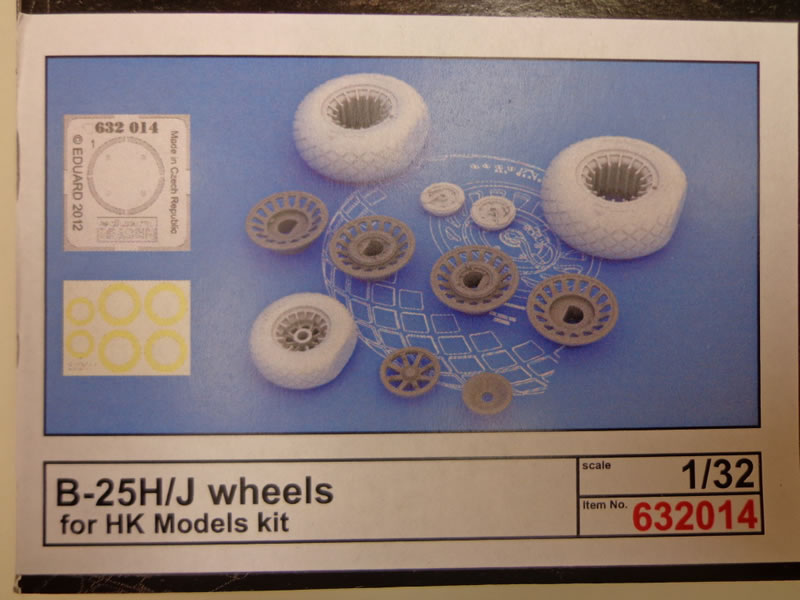 The instructions are in typical Eduard style, and if you have ever purchased any of their cockpit or exterior type PE sets, then you will be very familiar with the way these look. They are in color and clear and to the point on how to get the wheels and tires assembled correctly and do include several specific steps that need to be done. 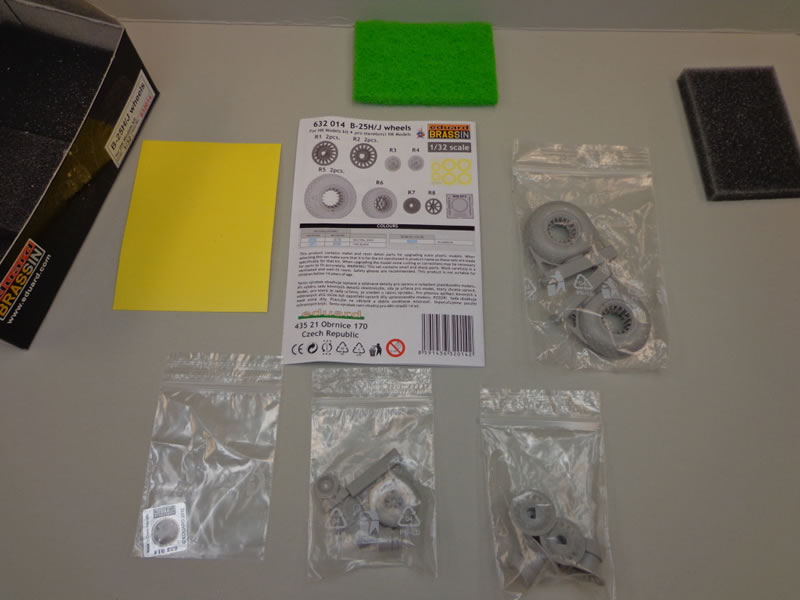 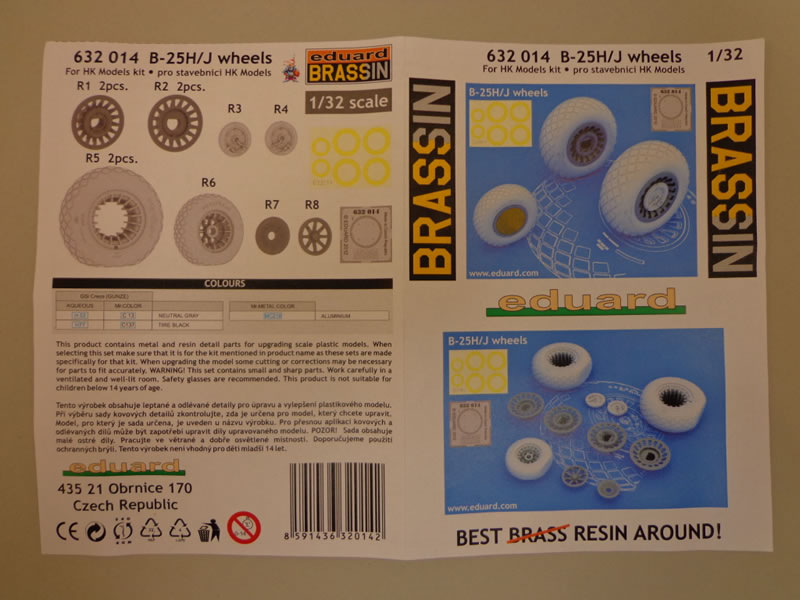 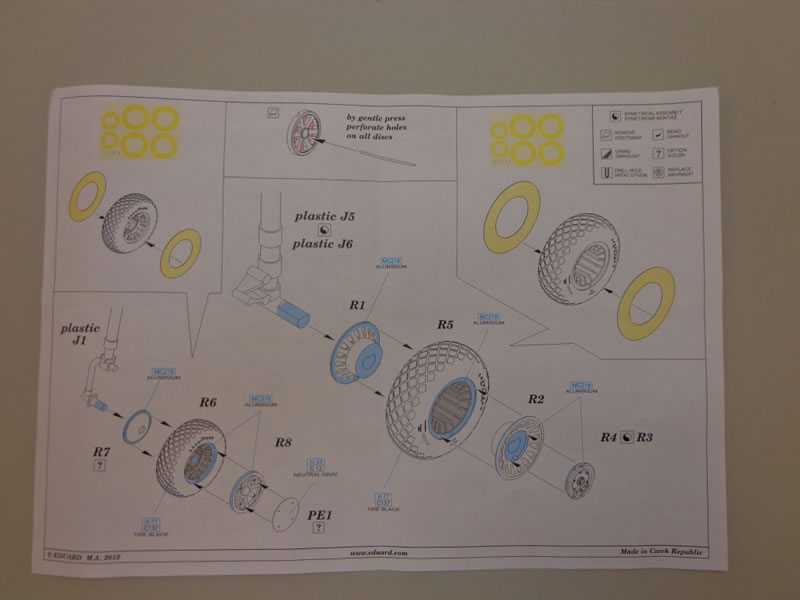 The HK Models B-25 is a great kit, and likely the best Mitchell in any scale, but it does need a little help. Many AM manufacturers have come forward to help address some of the shortcomings of the kit, including Eduard with their color PE, and now this wheel & tire set.

To me, wheels and tires, including the attitude at which they set (weighted or un-weighted / flush and even with ground) is very important, and if not correct can throw the look of any build WAY off.

The detail and moldings of the set are crisp, clean and have minimal flash, with the casting blocks and casting sprues situated in such a way as to cause the modeler the least amount of pain. The engineering and moldings are easily on par with Aires or any other top resin maker.

The wheels and tires are cast in a light gray resin with a texture and hardness that reminds me of the Aires stuff. There is some flash, but only in areas that you might expect it, and even then its very minimal and easily removed.

The mains are cast well and the detail is super crisp, including the “Goodyear” logo on the side. The diamond tread is very fine looking and does not appear to be overdone looking at period photos. 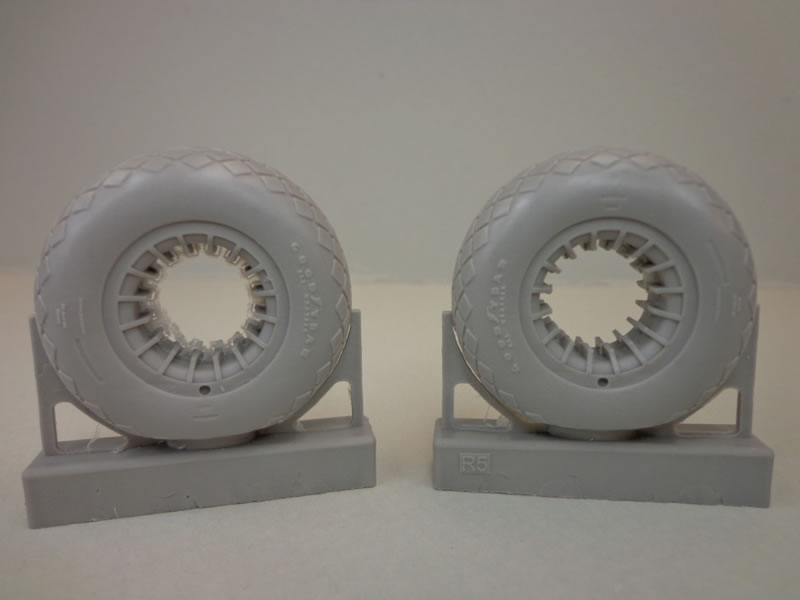 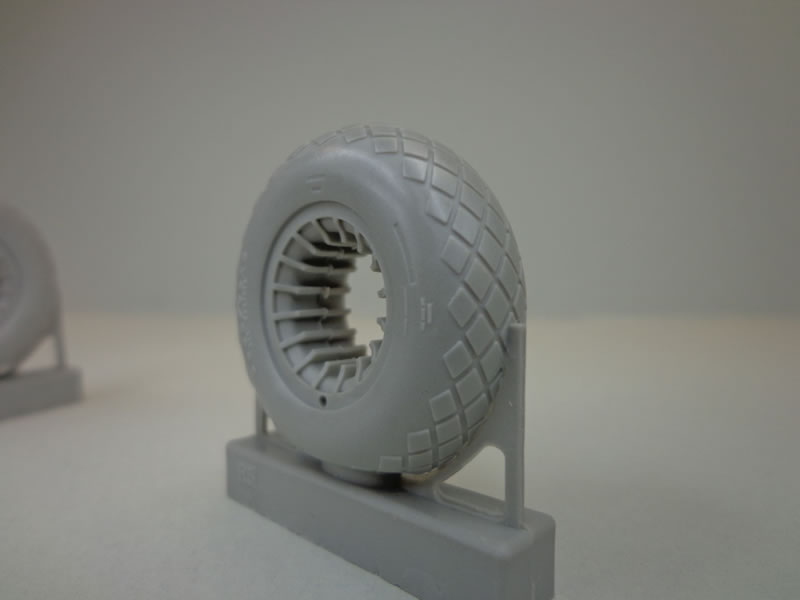 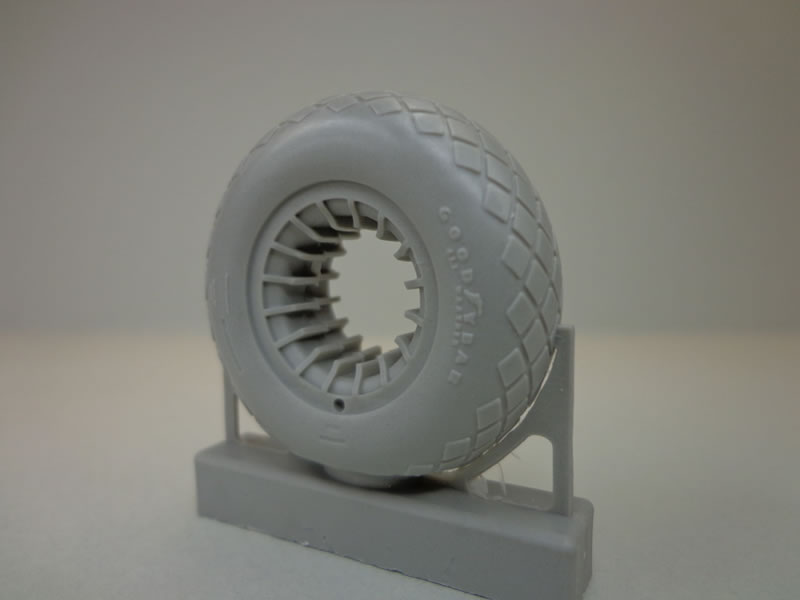 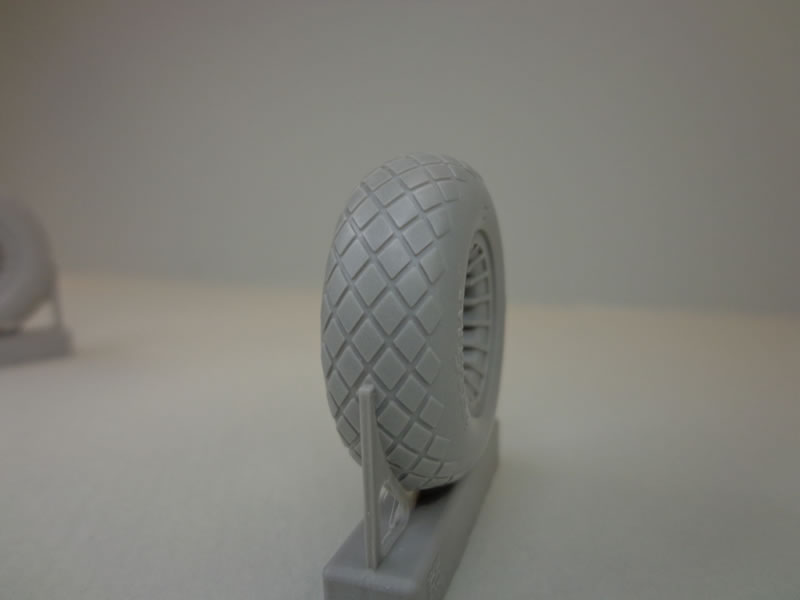 The casting blocks are small, and on the weighted flat spot on all three wheels, making them easy to chop off. Eduard was REALLY smart here, and put the casting sprues going up the tread on the raised diamond part of the tread, instead of in the reassessed areas, making it much easier to remove. 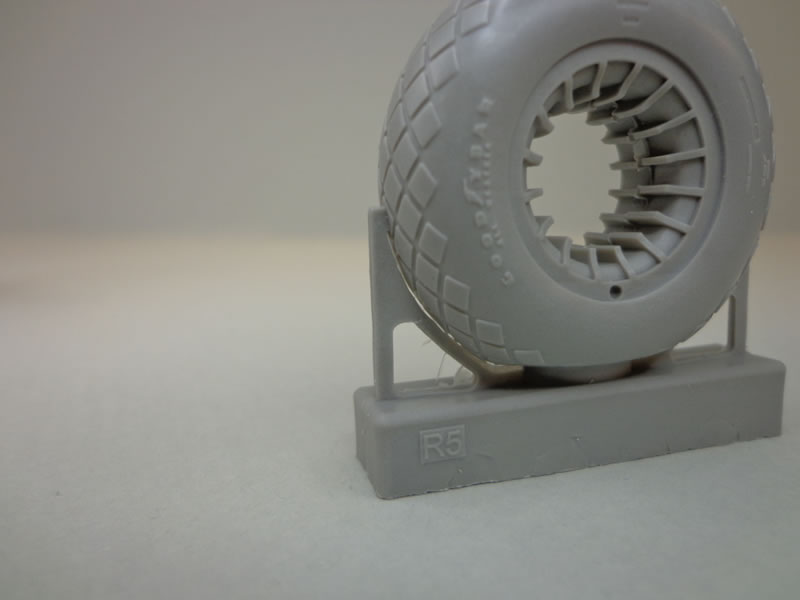 The next baggie contains the main wheel hubs. These, like the mains themselves are well cast, and the pour blocks are in an area that is clearly marked, and easily followed when cutting them off. Care will just need to be taken here to retain the little alignment groves Eduard has put on each hub. I would recommend a thin razor type saw for this procedure such as RB Productions razor saws. 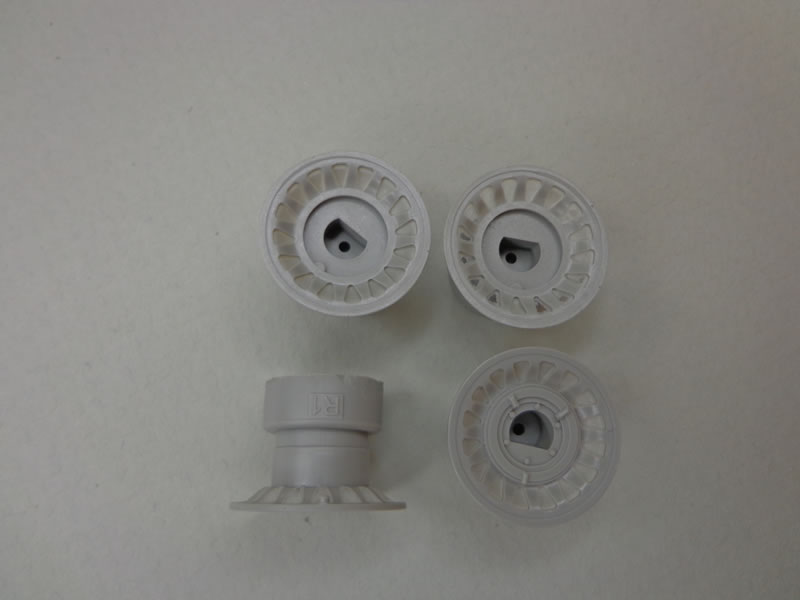 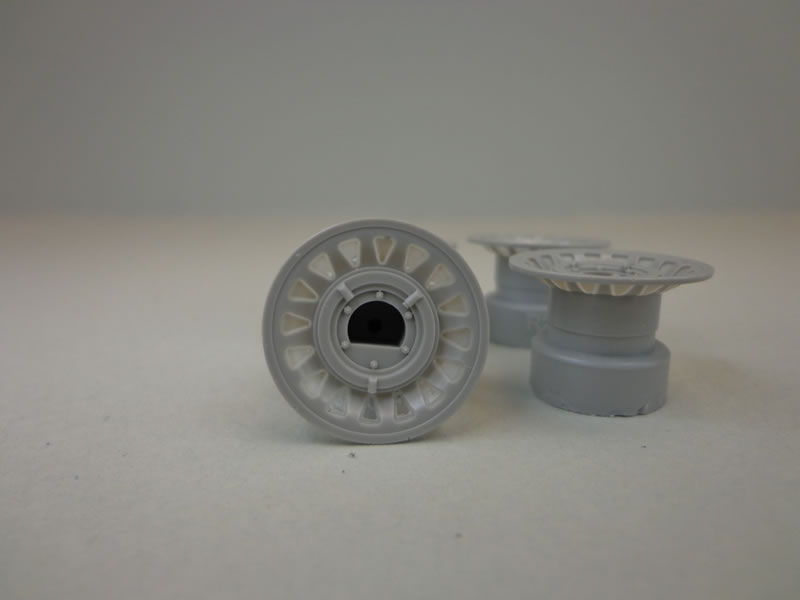 You can see some of the minor flash I was speaking of earlier here. This will easily be removed with a sharp #11 blade and some care. This is time consuming but will be well worth the effort when done. 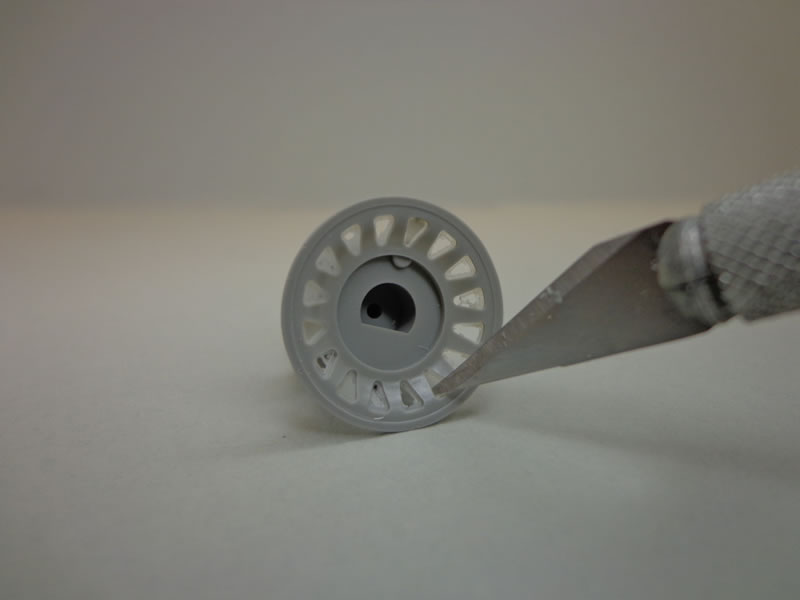 The Eduard instructions specifically indicate, and remind you that you have to punch out these areas, but indicate to “gently press” the holes out for all disks with what looks like a nail.

From looking over the these perforated areas, I don’t think any of them will just “pop out” nice and neat, and will likely all need some attention and clean up. 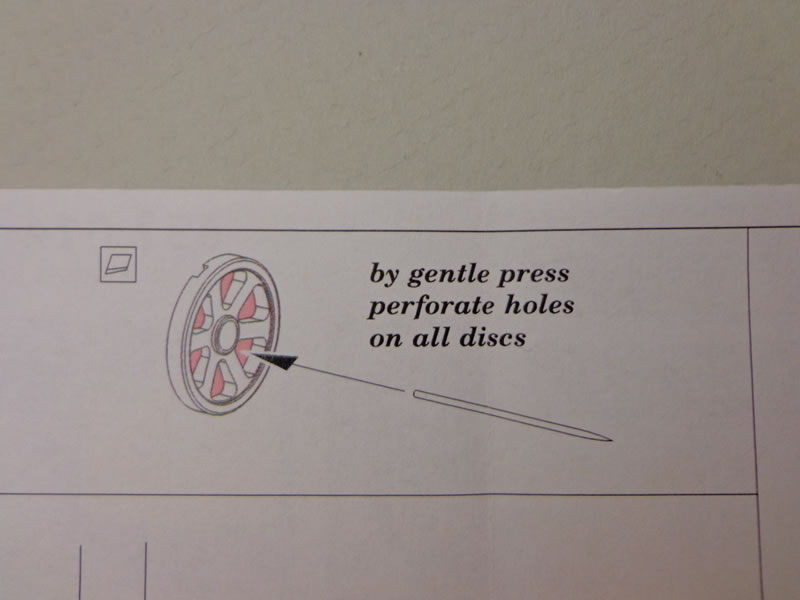 The tread and hub detail look really close to the 1:1 to me: 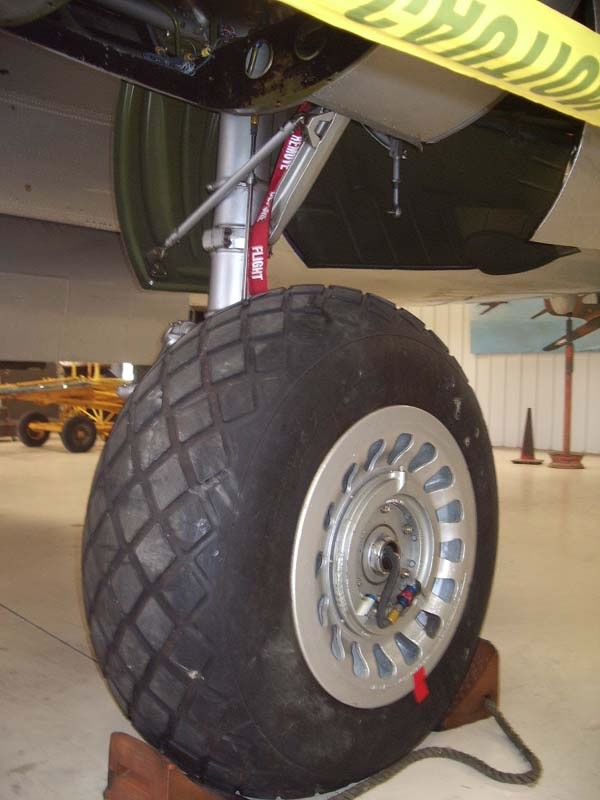 When compared to the OOB kit part, there really is NO comparison, since HKM split the wheels right down the center, making it almost impossible to get clean and crisp tread detail. Hub detail on the OOB parts is also sub-par compared to the Eduard Brassin pieces: 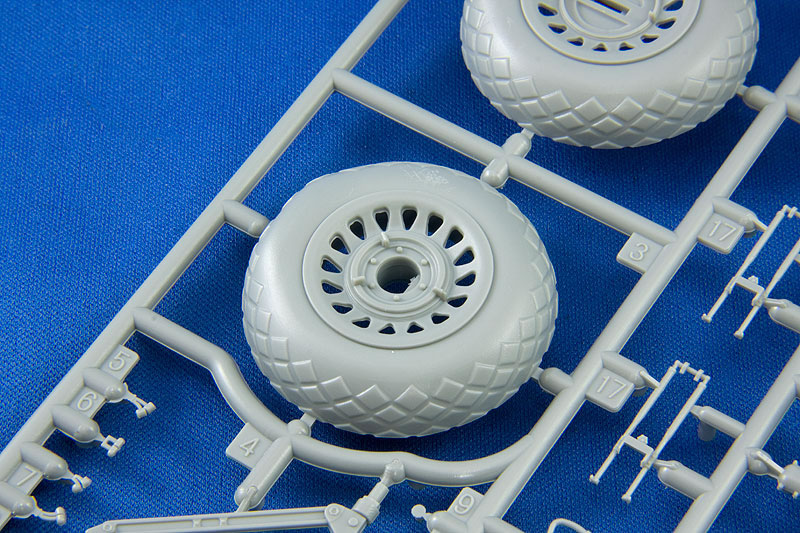 The next clear bag contains the nose wheel, nose wheel hubs, as well as the main wheel inner hubs: 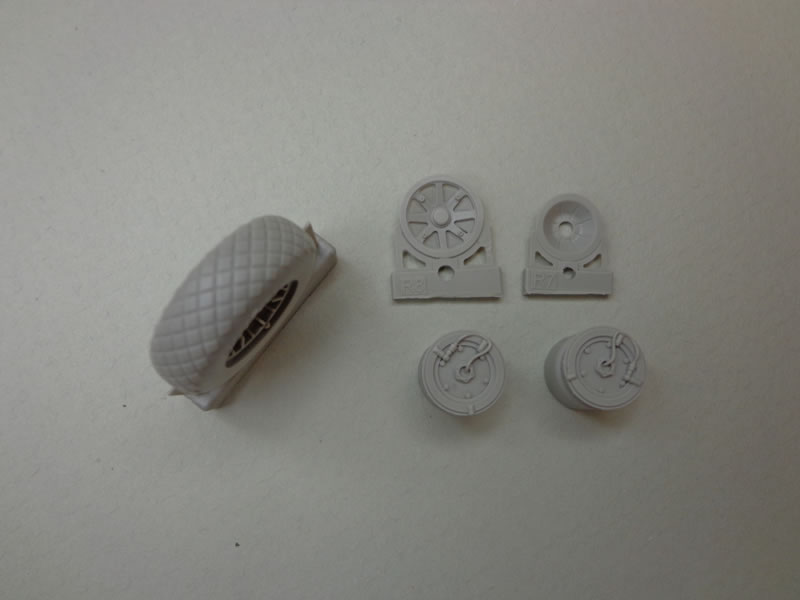 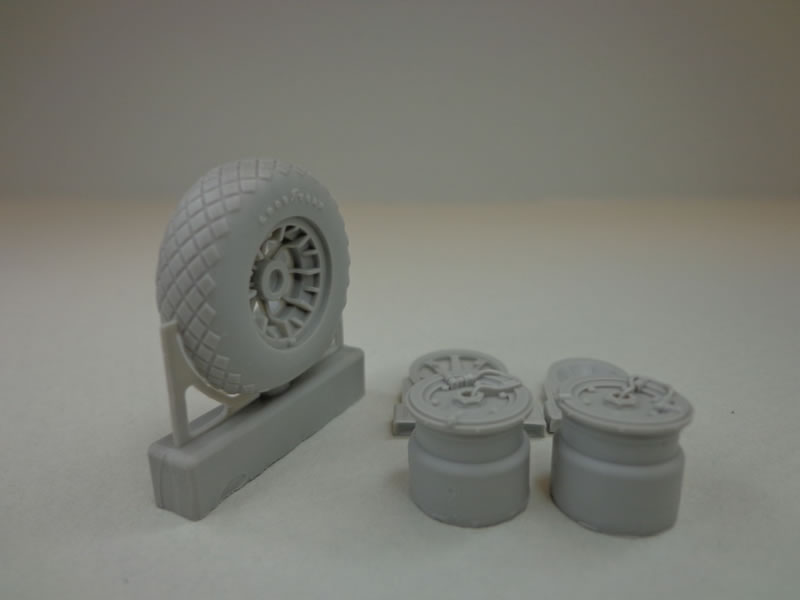 Here too, like the mains, the center bits between the spokes will need to be removed with a sharp scalpel or Xacto blade: 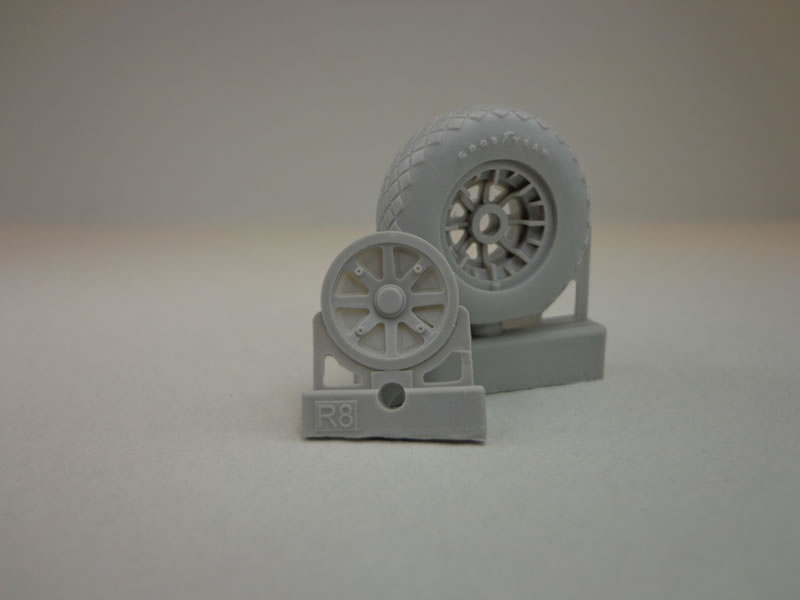 The main wheel inner center hubs are exquisitely molded, and the brake line, bolt head and center nut detail is VERY well done here and blows away the OOB offering: 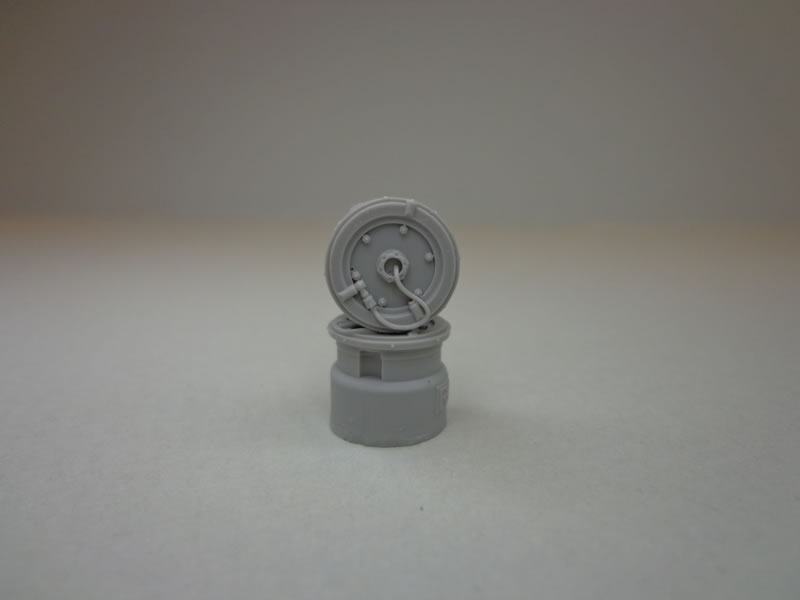 You can see compared to the OOB HKM inner hubs the Eduard-Brassin detail is much finer, and a lot closer to the real thing. The hub bolts are represented as real bolt heads instead of the blobs that HKM has. The brake line detail is much better and more natural looking on the Eduard hub, and there are no areas of flash to be removed around the delicate brake line and bolt head detail (photo courtesy of the Modeling News).

The nose wheel, like the mains, is extremely crisp and well molded with just a bare minimum of flash on the inner-most part of the wheel hub: 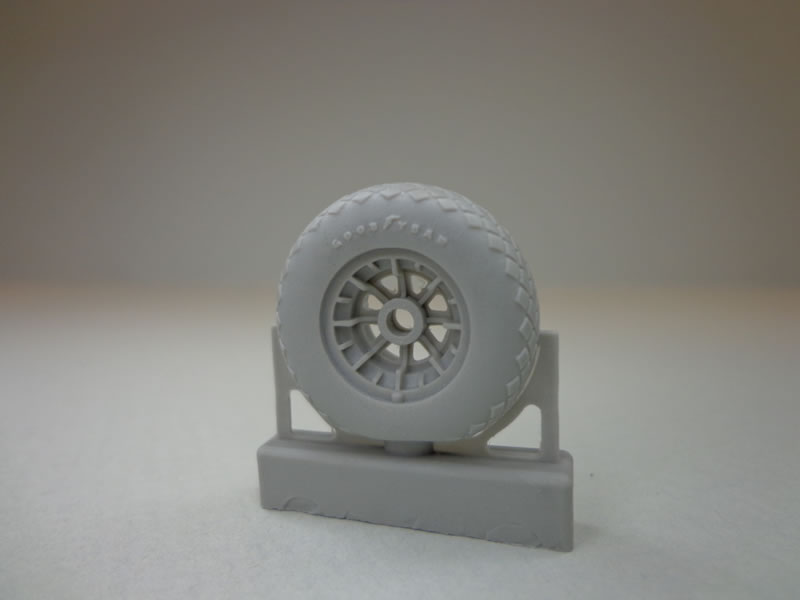 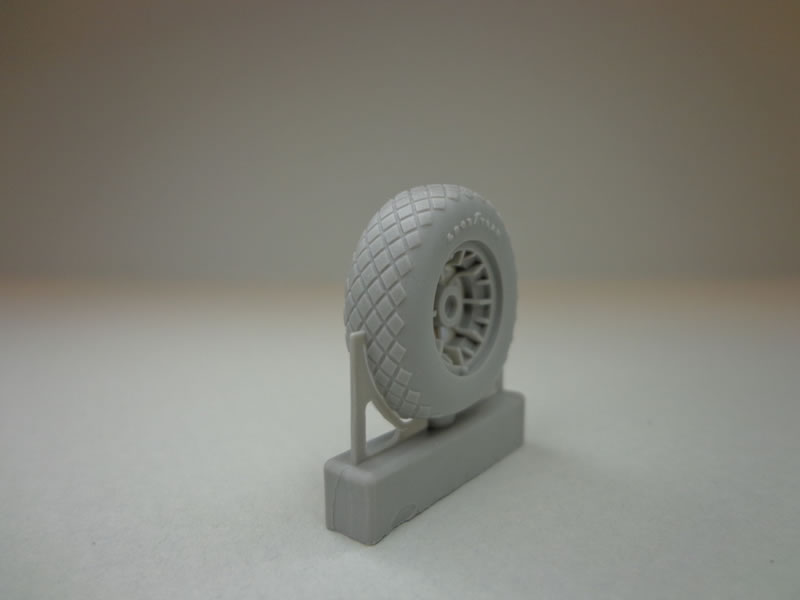 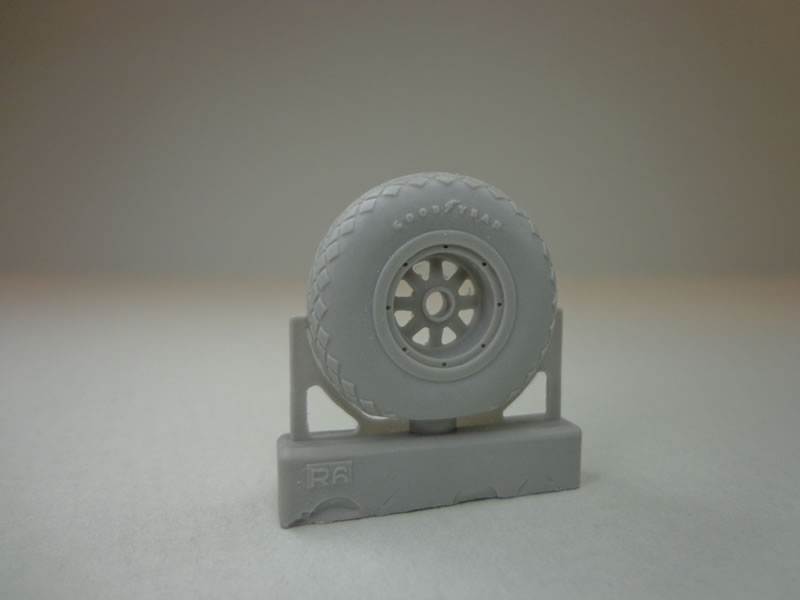 Looking over the 1:1 hub and tire, it looks like Eduard got this right as well (or about as close as you can come): 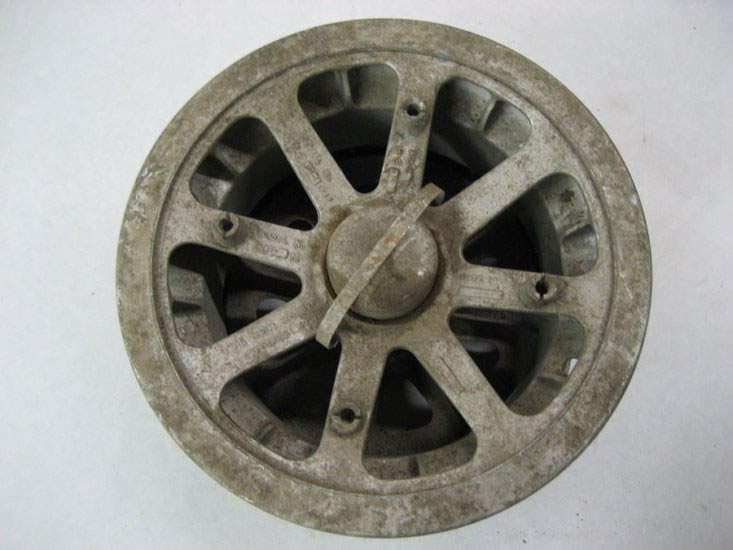 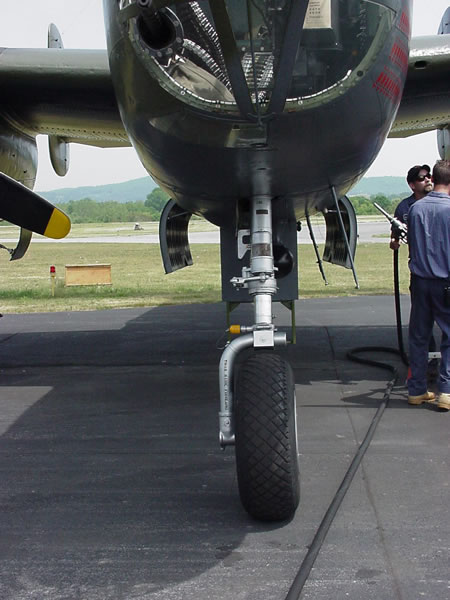 The PE nose wheel cover, is a welcome addition for those wishing to model a sweetheart of the forces with a covered nose wheel. This is optional and can be left off to expose the natural aluminum (painted yourself obviously) spokes. (Check your references for the particular aircraft your modeling to see whether it had the covered or exposed hub on the nose wheel.) 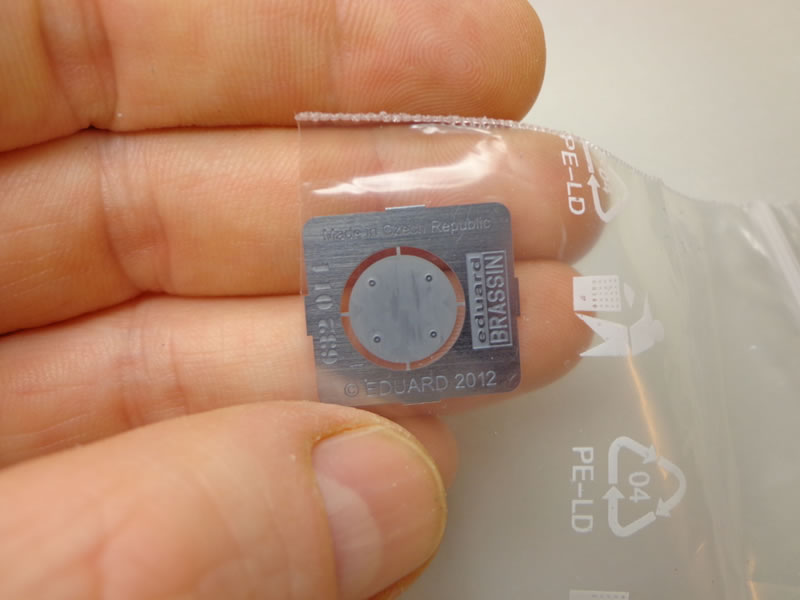 Lastly you get a sheet of rice paper paint masks for the wheels. This sheet is very typical of Eduard canopy and wheel masks they have always used, and again, if you are familiar at all with using those, you will have a good idea of what they are like. They seem to fit the wheels well, but are very difficult to make out in pics. These will come in handy to make nice crisp paint edges when getting some paint on this wonderful set (photo courtesy of the Modeling News). 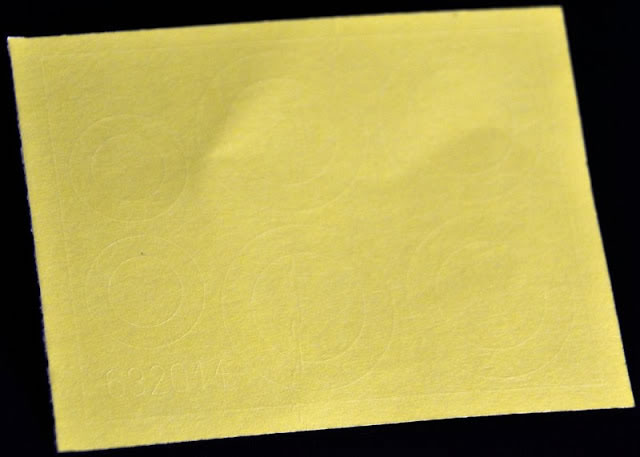 This new set from Eduard/Brassin is a great set that is well molded, crisply detailed, and fairly accurate from a non-B-25J expert’s view.

These are not perfect, and those that do not like fiddly things may find removing all of the flash in between the spokes on both the mains and nose wheel a little draining. This process does take a bit of time, but will be WELL worth the effort in the end, as the flash is easily removed, and there is not that much of it overall.

With 10 being perfect and 1 being completely useless, I would give the Eduard Brassin HKM B-25H/J wheels a strong 8.

Review sample courtesy of my wallet via Spruebrothers.com.