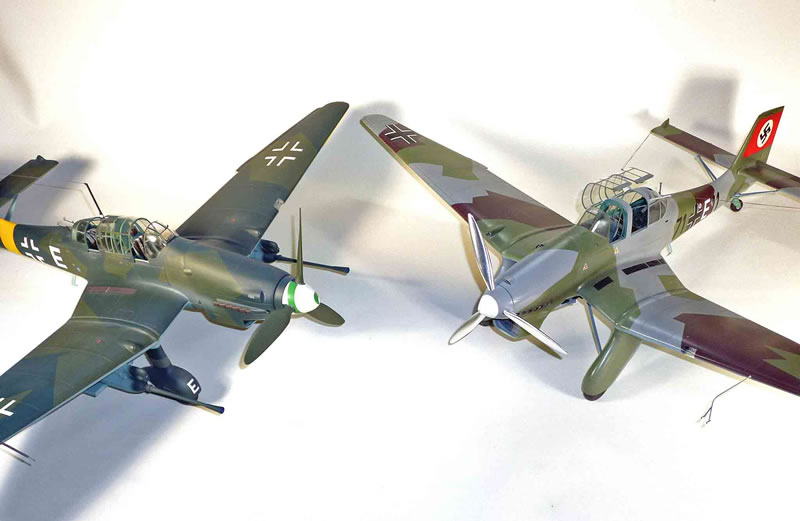 Under the bed in our guest room are two large boxes, each containing a converted 1/24th scale Ju 87; one is an “A” and the other a “G”. The big beasts were built pretty much back-to-back in the early 1990s and were displayed at a couple of shows before being relegated to under the bed. They were written up, sort of, back in the day, but I got the notion to trot them out again because of a personal story I was reminded of while visiting my daughter in Anchorage (BTW, anyone know of discount airline tickets to there from Atlanta? Neither do I).

The story is that my Son-In-Law’s grandfather was a pilot in the Luftwaffe and flew Stukas on the Eastern Front. He survived to emigrate to this country immediately following WWII primarily because he was a Master Welder. Therefore, due to the widespread needs of German industry, he was taken off flying and worked in that capacity for the rest of the war. I actually met him during the wedding, but obviously that was neither the time nor place for me to talk to him about his aviation experiences. Although I did meet him several more times, the chance was just never there for me to follow-up before he passed away (One quick side note: for my birthday this year, My Son-In-Law gave me a flight for the two of us on a Turbo Otter around Mt. McKinley which included a landing on a Glacier. Nice Son-In-Law to have---).

The one airplane-related picture I have seen of his Grandfather shows him in a more-or-less typical shot of him holding onto the prop of a late-model Stuka. My regret is that I did not make more effort to speak with him, but, among other problems, I live in Atlanta and he lived in Seattle. My total lack of German did not help things. I also do not know whether he ever continued flying after the war.

In any case, I have felt a bit different about the models since that experience, so I thought I would throw these brief write-ups “out there” again in case someone else would like to tackle a (very) big model.

Note: The construction photos date from film and long ago, so they therefore leave something to be desired.

When I got the urge to see if I could do something with the 24th scale Ju 87 kit beyond the B-model, my first choice was the Ju 87G with those big cannon hanging from the wings.

Although there is now a plethora of information available on every individual rivet in a Stuka, back in those days, not so much. The best available was the 1977 PSL book on detailing the Airfix kit (Classic Aircraft No. 5). This book, released at the same time as the kit, has excellent drawings in 24th scale for most versions of the Stuka, and a wealth of detailed information.

The conversion consisted of making a new cockpit enclosure, replacing everything between the firewall and the spinner, modifying the landing gear, and, of course, building the underwing cannon.

The first step was a mold for the new canopy, which was carved from balsa and covered with epoxy. The canopies were heat-formed from 1/32 Plexiglas. A thicker, flat piece of plexiglas was epoxied to the front of the windscreen to represent the armored glass.

A twin-gun mount for the rear cockpit was scratch-built and matching holes were drilled in the rear-most section of the canopy. Changes appropriate to the later version of the Stuka were made inside the cockpit.

Molds for the new nose (in two halves) and the radiator housing were, again, carved from balsa, then vacuum-formed .030 styrene. The new nose was mounted by simply cutting off a piece of he mold and using it to glue the new nose to the kit firewall.

The exhaust stacks, spinner, and propeller from the kit were used as is.

The kit landing gear was modified to produce the correct "G" shape.

The wings and tail of the model were built “out of the box”, making only the relatively small changes necessary for the later version.

The Airfix book also contained excellent drawings (for the day) of the cannon. The body and barrels were turned from hardwood on a small lathe. The upper structure and the magazines were also cut from hardwood. All of these parts were filled and primed and the parts were keyed to each other. The flash hiders were turned from styrene, and the various external pipes and lines added with aluminum tubing and wire of varying gauges.

The model was painted with Gunze, and all markings were sprayed on using patterns cut from Frisket paper (available at any art supply store). The "E" was cut from white decal sheet; the swastika and a few smaller markings were taken from the kit decal sheet. Some mild weathering was applied. 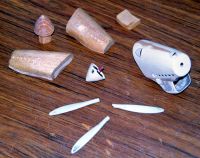 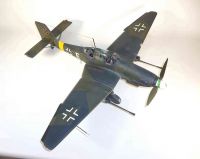 About a month after finishing the Ju 87G, and while recovering from a set of broken ribs, I happened to be looking at an old Koku-Fan special on the Stuka and realized that it was mostly about the Ju 87A, which also intrigued me. After again digging out the references, I decided to try an "A" as a companion piece to the "G". Once again, the most useful source was the PSL Airfix book, which contains all the drawings necessary for the -87A.

The canopy was quite different from either the G or the kit B. Another new mold had to be produced. This was done in the same way as the G, but the molding and finishing process was a bit trickier because of the concave curve in the rear canopy portion and the somewhat complex opening for the machine gun. A final canopy complication was my desire to mount the canopies in the open position; that required some rather delicate fitting and drilling.

The changes made inside the cockpit to reflect the earlier version were more extensive that was the case in the G. For example, a windowed and barred partition immediately behind the pilot had to be built for the A; I used a slice of the mold for that.

Small antenna posts were mounted on the sides of the canopy and provisions made to mount antennas to the tips of the horizontal tailpipes.

The nose area of the A was a bit more complex than the G. The radiator is deeper and more faired at the rear. However, the process for making them was the same as the G.

The exhausts had no external stacks, so the holes for them had to be carefully laid-out and cut so that they would be straight and equal in size. Scoops also had to be molded and fitted to several parts of the cowling, including two small round ones which sit on either side of the radiator opening.

A new spinner was turned from hardwood and molded in styrene. The kit prop blades were radically thinned and narrowed to produce the blades of the A.

The large wheel spats were molded in two halves and two sets of spats were made. These were assembled with a shelf running across the interior at a point about ¼" above the opening for the wheels. The kit wheel/tire combination was then cut at a point that would allow the correct amount of wheel to show. After finishing, the flat portion of the wheel was simply glued to the shelf. Struts for the new spats were made from styrene.

A new bomb crutch was made to fit the new nose section, and the long and complex pitot tube was made from soldered brass wire. Because the pitot tube is so vulnerable, it is not glued in place and can be removed when the model is being transported.

There was really no question about the color scheme; it just had to be one of the few Ju 87As sent to Spain during the civil war. The paint is Gunze, and the markings were painted on using Frisket. The swastika and a few small decals were taken from the kit. Very little weathering was carried out, mainly because I didn’t want to mess up my paint job. 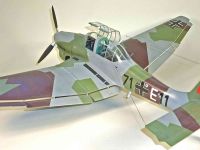 These two models have always been among my favorites, and of course, since I learned of the (almost) family connection, that is even more so. Yes, the size of these 24th kits can be intimidating, but they are very satisfying to work on. They are big enough to accept any amount of detail one wishes to include, and much of that detail is actually easier to build because of the size.

By the way, although I have a nice brand-new kit in the basement, I have yet to build a Ju 87B.