Sometimes, modelers go out of their way to make trouble for themselves, and this model is a case on point. As most know, the Trumpeter F-14 is a very nice kit, but I decided to look around and see what I could do that might be a little different. As usual, that means an increased level of aggravation as well.

After a bit of research, I decided to try doing the Number 7 prototype, but with a twist. It seems that this airplane, after being involved with the initial testing, sat for about 4 years, after which it was refurbished and modified to become the prototype F-14B, which utilized GE engines. That meant that information was needed on both the "B" conversion, but also on the original configuration. Thus, a lot of backdating was called for. For example, this airplane never flew with a radar, so all that was left out of the rear seat area and a few test panels were guessed at.

In addition, the vent area for the gun was not on this airplane, nor was the gun. Only a blank plate covered that opening.

Lots of other little things had to be attended to (hinges on flaps/slat, minor mods to the intakes, test probe on the nose, etc.) but you get the idea.

For the basic interior, I had one of the original True Details cockpits, which were originally released at about the same time as the Tamiya "A" kit. It all fit the Trumpeter kit fairly well (including all those accursed circuit breaker switches in the rear cockpit).

I also made one change in the interest of practicality: Because this is one big aeroplane, and I wanted to display it in wings forward position, which unfortunately meant that it would not fit on my display selves. Therefore, I made a slot in the hole that fits onto the fuselage pivot point; that makes it possible to slide the complete wing in and out, thus saving room.

The most important structural change, of course, was the GE engines. For those, I used the Aires resin cans, which fit beautifully.

Now we come to the paint job, one of the main reasons for building this particular aircraft.

It is basically a couple of bottles of airbrushed Tamiya Flat White. I usually use the Tamiya spray cans, but for some unknown reason, they did not like this project, and therefore dried in very uneven spots. About two coats were necessary (I say "about" because as usual, at least for me, in white paint schemes, some areas did better than others). The red areas were (tediously) masked off, and sprayed with Tamiya flat bright red. Since this was a prototype, there were very few maintenance markings which made the decaling job much easier; mainly safety and escape markings.The small black serial numbers on the rear fuselage were in an unusual font, so they, along with the blue "Super Tomcat" on the tails, were made on my computer. I am anything but an expert on that, but after a few false starts, it worked out.

When finished, it does have a presence, but it will be a while before I do another one of this size in white. 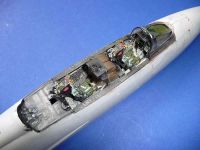 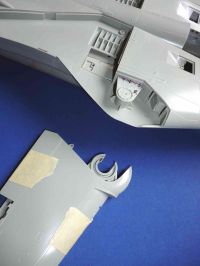 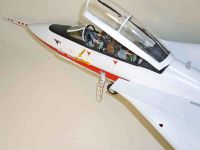 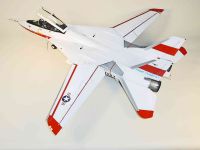