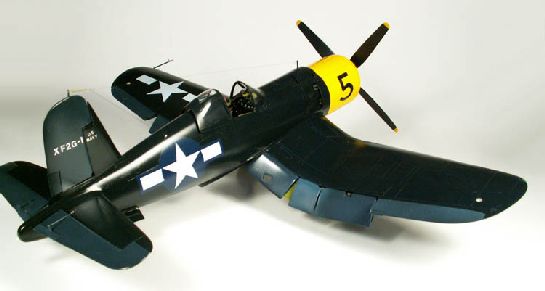 Goodyear Aircraft Corporation, known as "G.A.C." during World War II was located in my home town of Akron, Ohio. During the latter part of 1944, GAC started experimenting with the newly developed Pratt & Whitney R-4360-2 twenty eight cylinder engine. There were seven cylinders in each of the four rows. Each cylinder had two spark plugs. There were seven magnetos in front of the first row of cylinders. It was the biggest engine out there at that time.

Goodyear revised a regular F4U-1A fighter plane by making some changes to the front of the airframe so it would accommodate the new big engine, including a new four blade 14' 0" diameter propeller. The air inlets which were located on the leading edge of the wings were redesigned. A large panel was slanted inward on each side of the fuselage, just aft of the new cowling, so the four exhaust stacks would fit in. The underbelly was redesigned just aft of the cowling, as there were six exhaust stacks there. They may have made some cockpit changes, but I do not have any data on this. They closed up the tail hook area, and installed some sort of long center line bracket on the bottom of the fighter. I've enclosed a couple of photo of said aircraft in question.

The drawing shows all the conversion areas for the F4U-1A and for the full F2G. I have included photos of a few of the high quality cast resin parts. 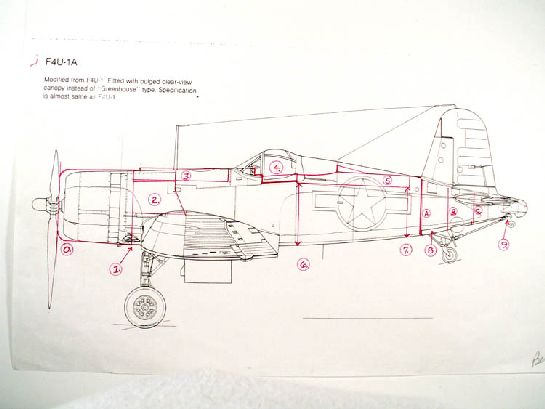 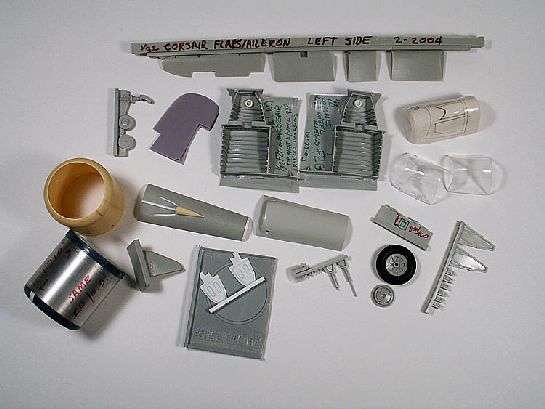 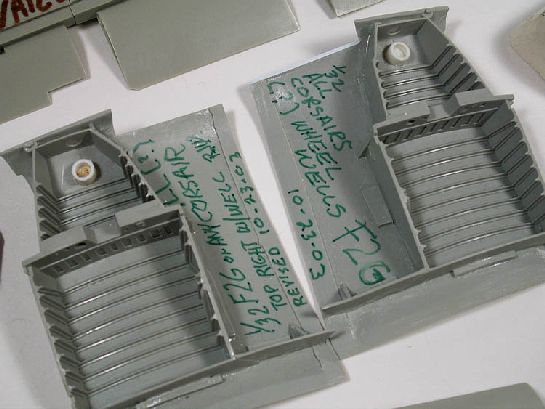 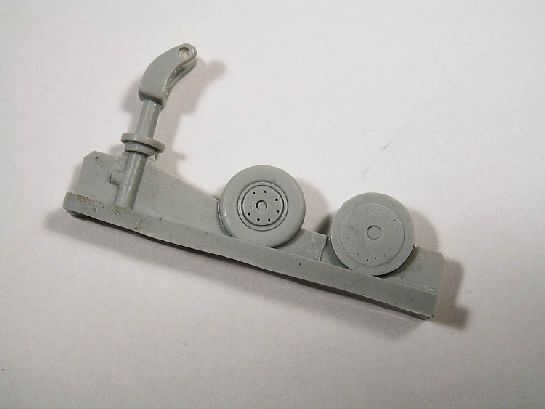 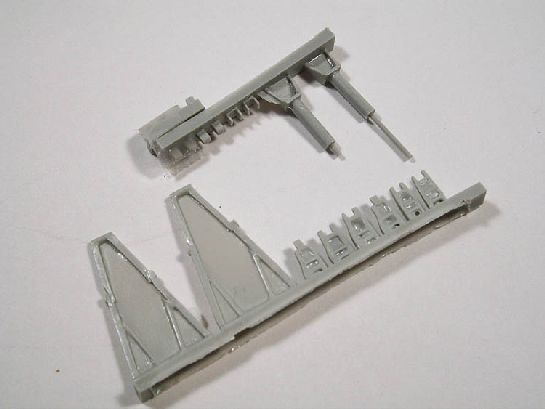 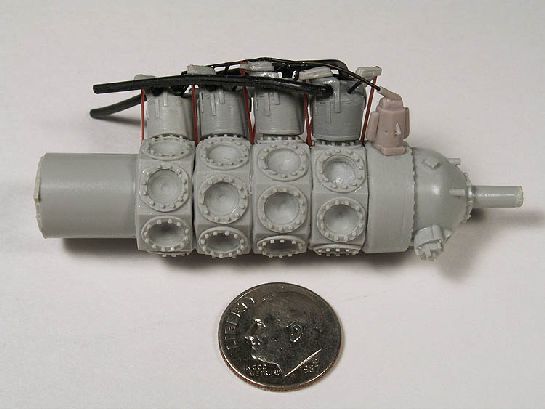 As many of you know, I have built other F2Gs using Revell kits. My "Crashed F2G" was finished back in 1999 and is on ARC's website. My first F2G was built in the mid 1980s and became a racer. You can see this flashy red and white model on Skywriters web site.

Once my Crashed F2G was finished, I got busy and finally completed all of the "masters" for my conversion kit. I think there is around 200 parts.

To speed up production on my model, I purchased the Verlinden cast resin cockpit for my Corsair project. Once all the parts were cleaned up, I glued them together with white glue. Man, did it look great! After the glue was dry, I temporarily white glued the cockpit tub to the left half of the fuselage. The right half of the fuselage would not close up. The damn cockpit tub was too wide !! I double checked everything, to see what I did wrong. To no avail, the two fuselage halves would not fit together. I took everything apart and was back to square one. Thus, I had to trim off quite a bit of the resin from the outside edges of the front cockpit fire wall part, and the same for the aft cockpit frame behind the seat. 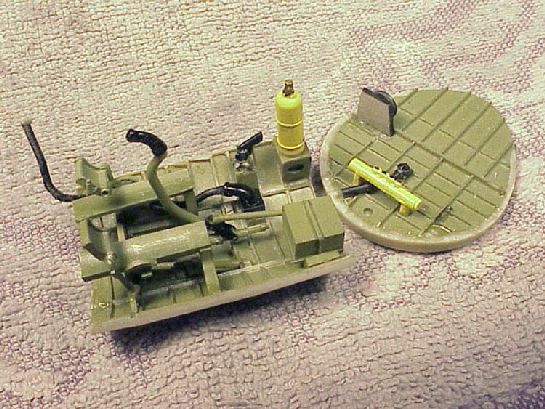 After this problem was solved, I painted all the cockpit parts, then reinstalled them into the cockpit tub. I attached the tub to the left fuselage half with white glue, then fit on the right fuselage half. Everything was lined up and then the two halves were super glued together. 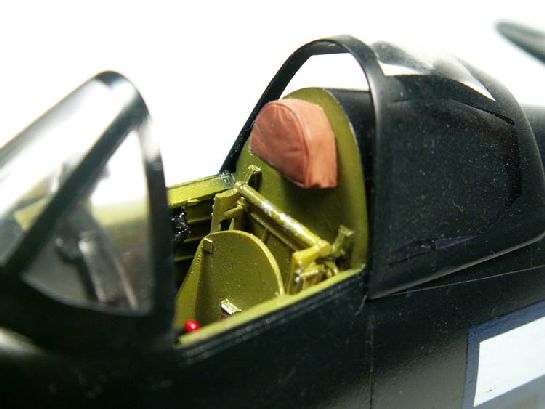 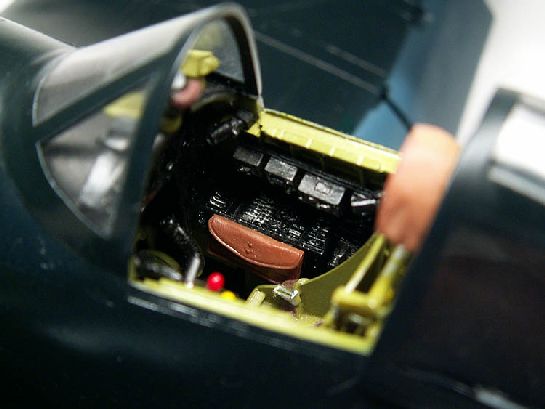 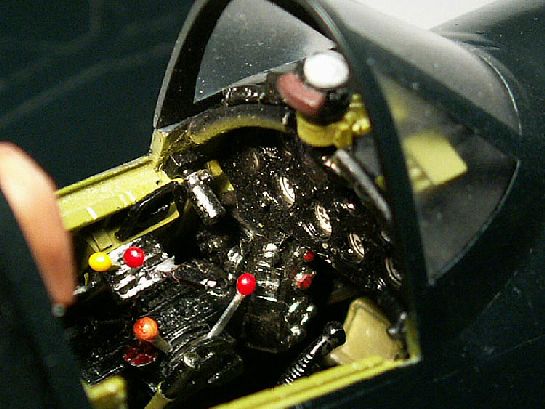 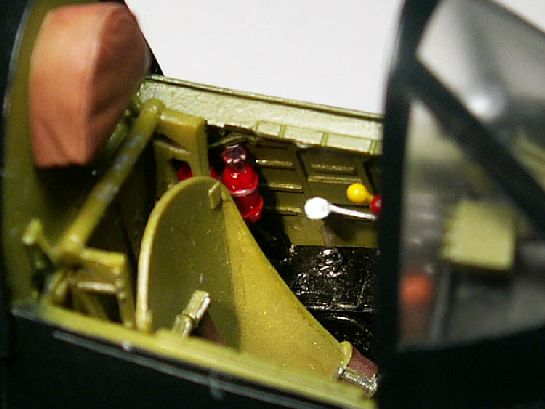 My next step was to follow my instructions on where and how to cut up the front of the kit, so I could attach all the parts for the new engine mount. Once this conversion segment was completed, it was time to build my engine, paint it and get it installed so I could attach the new one piece cast resin cowling. 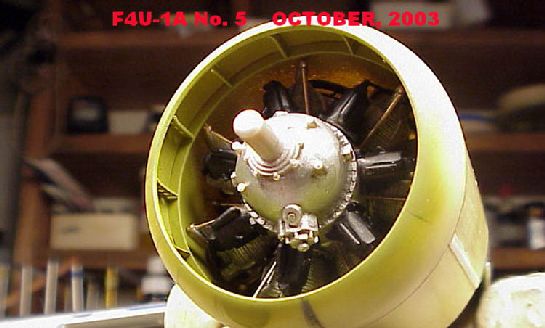 My cast resin center wing section was ready to install. Surprise!!! it would not close up! Yeah, you guessed right?? The cockpit tub stuck down way too far. I'm enclosing a photo of the tub, which is marked with lots of red "X's." At least 1/16" to 1/8" of resin had to be removed. Prior to doing all this cutting, I rechecked all of Verlinden's instructions, then I placed a regular kit center wing section in position. I had the same problem. I'm sure lots of modelers out there have purchased Verlinden's cockpit. I wonder if you have had the same problem that I have? 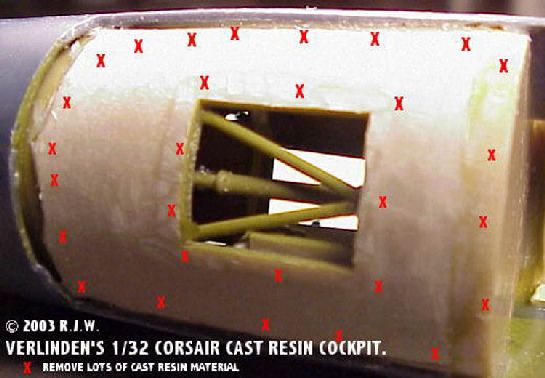 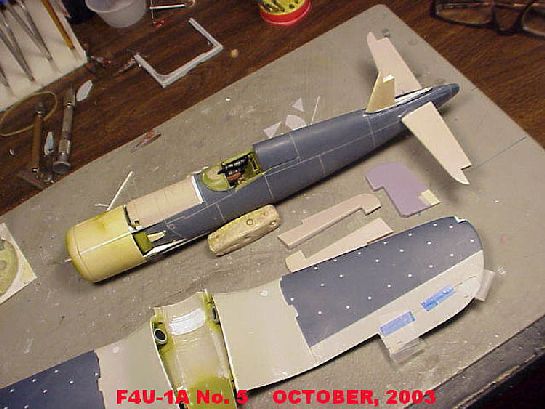 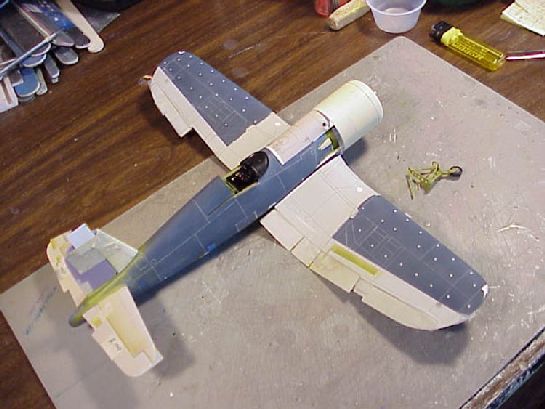 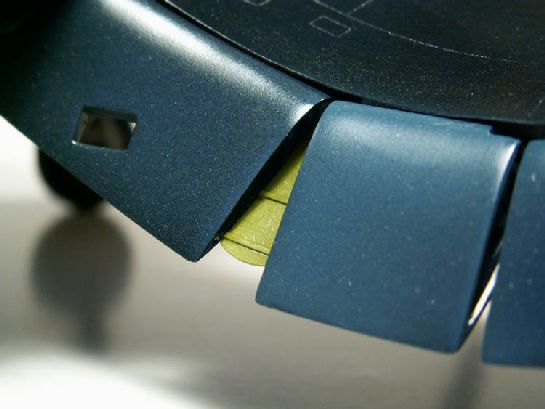 The rest of the work on the model went well, but I did have some minor alignment problems here and there. To say the least, the main landing gears are a bit complicated, but with proper effort and plenty of time, all the parts just more or less fall together, including the tail wheel assembly, and all six gear doors. 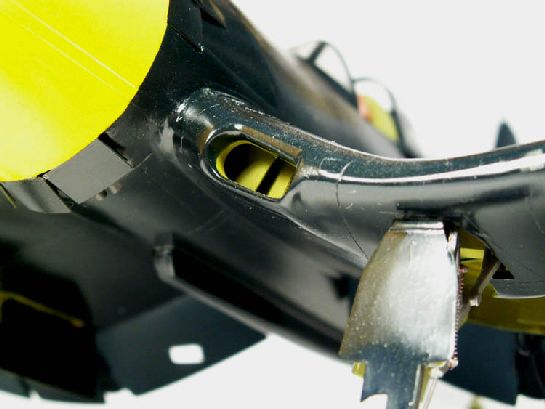 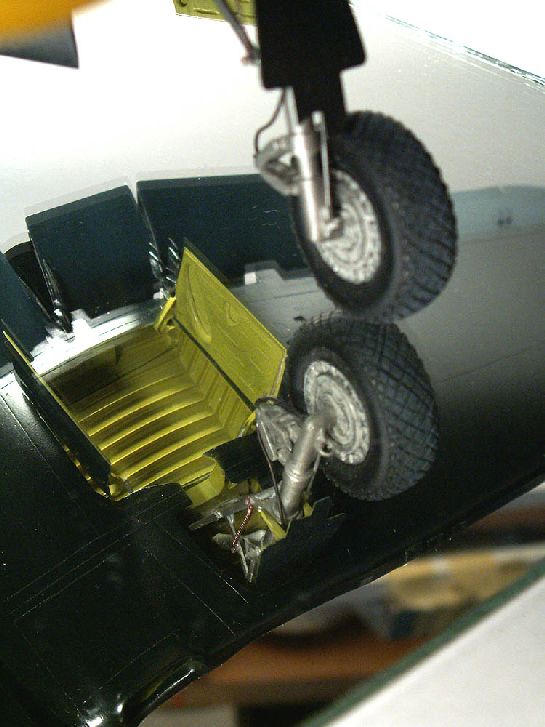 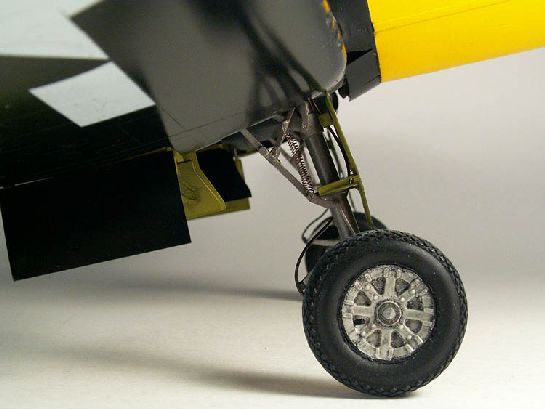 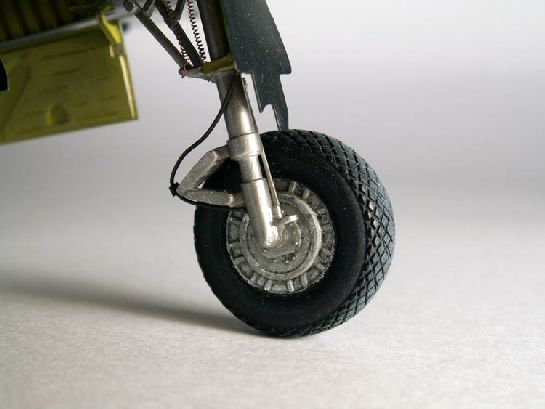 I used Tamiya paint, and made a pattern for the number "5" which was painted on both sides of the cowling. Fourth coming is another short story on my F2G Corsair with a number "9" on the cowling. 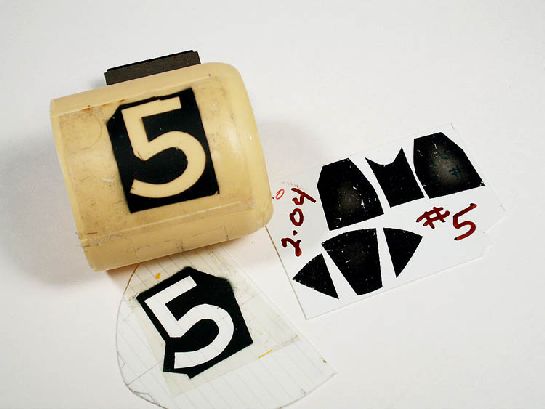 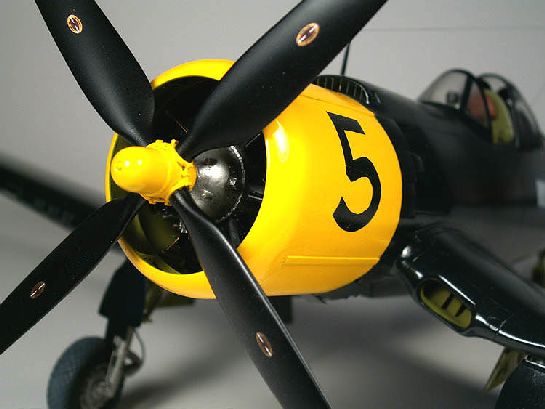 The resin kit can be purchased from OBSCURECO. I made the masters only, and have absolutely "zero" to do with the manufacturing and marketing of said cast resin conversion kit. [Editor's note: this conversion is no longer available as at 2013.] 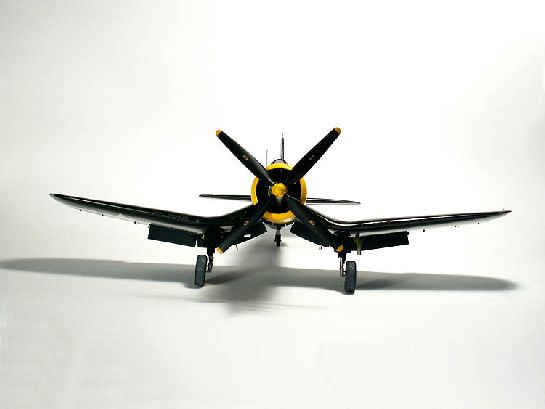