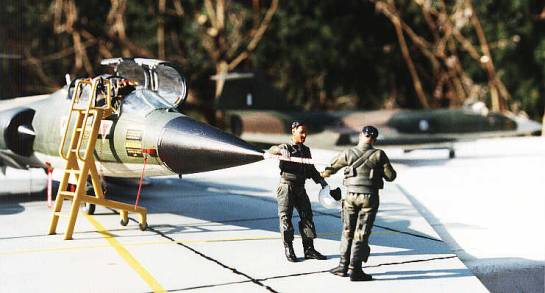 The first Starfighters arrived in Greece in April 1964. The Royal Hellenic Air Force received through MAP 38 F-104G and 4 TF-104G. They were all in overall natural metal finish with white wings and carried a "buzz number" (FG- plus the last three digits of the serial number) on the fuselage behind the wings. In 1966 came five more F-104Gs and two TF-104Gs. Two squadrons flew the F-104G, the 335 Interceptor Squadron and the 336 Fighter-Bomber Squadron. When the Starfighter was withdrawn from active duty in 1992-93 both squadrons converted to the LTV A-7E Corsair II. 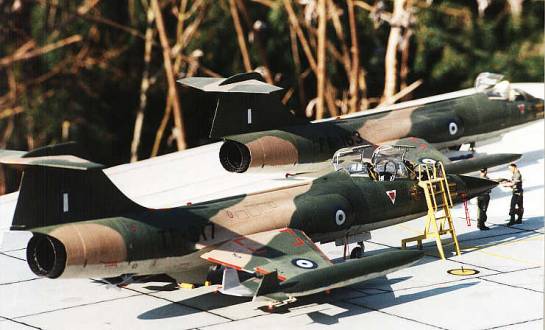 In 1971 all aircraft were painted with the standard USAF-SEA camouflage and the good old silver glory days were over! More aircraft were received in 1972 from Spain and in the eighties from Germany and the Netherlands. During the first year of operation by the RoHAF No 335 Squadron was able to fly more than 1000 hours without any accident proving once again that careful training and maintenance could make the Starfighter as safe a fighter as many others of its generation. The people that flew the F-104 are proud to say today: "We are the 104ers". 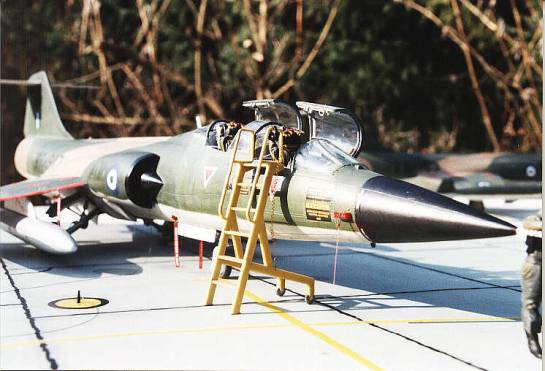 As I wrote before, there are two kits of the F-104G in the big 1/32 scale, one from Hasegawa and another from Revell. The Hasegawa Starfighter is the better Kit but Revell offers a far better price and here and there some better parts than the Hasegawa kit. So I chose the Revell kit because I needed two kits for the conversion and wanted to save money. The choice for the Revell kit means that some extra details must be made from scratch for the conversion. Well, let's get started! 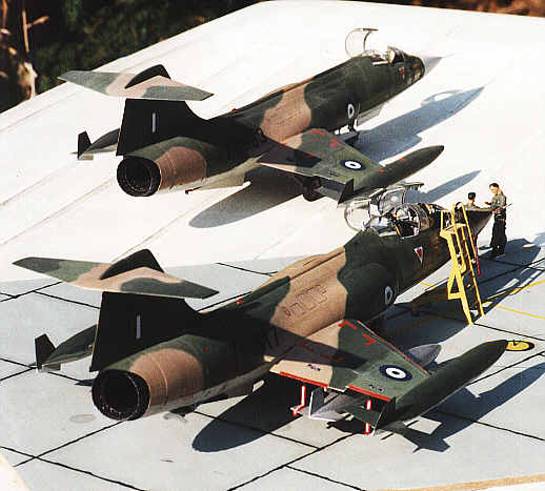 Before I could start, I needed to know the correct dimensions of the TF-104G in 1/32 scale. In that case I used the fine 1/72-scale drawings by A. Granger from the book of P. Moyes "The Lockheed F-104 Starfighter" (Aerodata International No 15). I photocopied those drawings up to 1/32 scale by enlarging 225%. The Revell TF-104G in 1/72 scale was used for the 3D understanding of the proportions of the fuselage behind the cockpits. 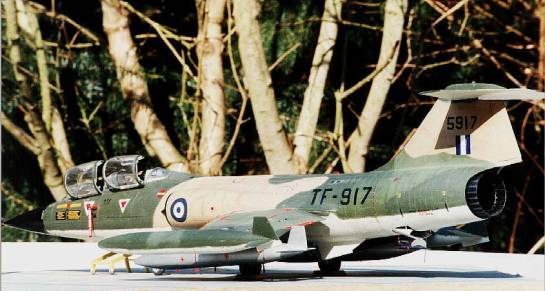 I found out that the length is the same in both versions and this made things much easier. First I cut out the region behind the cockpit (the electronic bay of the F-104G) to make room for the second cockpit. I used epoxy putty to form the fuselage behind the back cockpit.

This was the trickiest work of the whole conversion. It took many weeks of thinking, sanding, more putty here or there, more sanding and more thinking.... but in the end it worked! 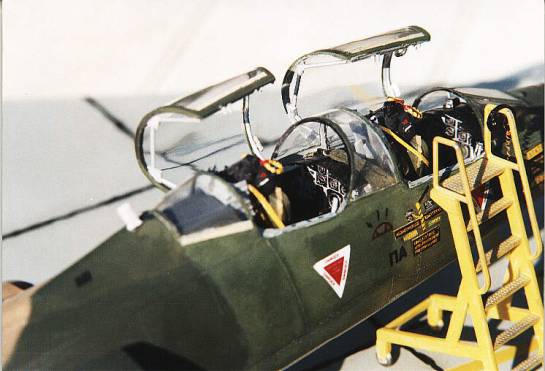 The cockpit of Revell F-104G is actually for the C version (the instrument panel) but this should not be a problem. The difference between the C and G panel are not so big, so I used those panels as I don't want to buy too many resin parts. I cut the side panels and glue them in an angle because they are absolutely horizontal (If you have the ESCI F-104G Cockpit in 1/12 scale, this should be a great help). For those who'd like to make a 100% accurate cockpit the Kendall set would be a fine replacement. 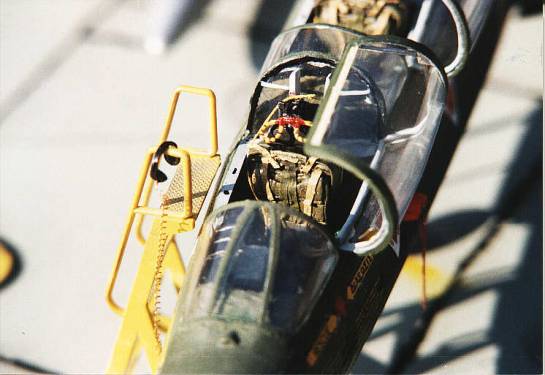 The back cockpit had to be changed to fit in the more narrow fuselage region in the back. The back wall was made from plastic sheet. I used the cover for the front panel (kit part No 10) for both cockpits and changed it only for the back. The TF had no internal gun, so I closed the gun bay doors and sanded the gun muzzle smoothly. 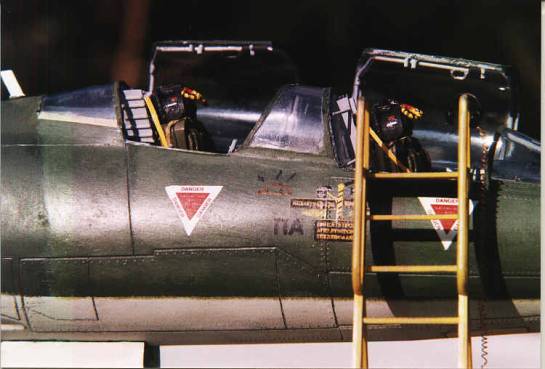 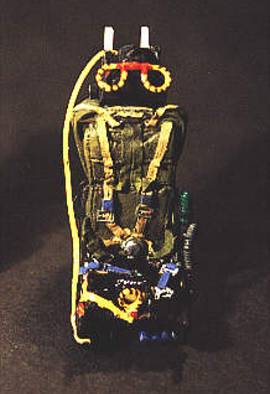 I used plastic sheet from Evergreen to make some details inside the cockpit walls. The throttles were made from plastic styrene. Last but not least: the seats. Both kits have the original C2 seat that was used for all countries but after 1972 Germany, Greece, Italy, Turkey and Denmark changed the C2 seat with the Martin-Baker Q7 seat for safety reasons. Well I wanted to build a late Starfighter and there is only two ways to solve the problem: build the MB seat from scratch or buy the resin Q5 Seat from CamDecals. I was very happy to choose the second way and receive those fine resin parts. The seat is very accurate and highly detailed and depicts the later GQ7 version (the headrest is more round). I put on both seats an oxygen tube made from wire, and I made the details behind the front seat from scratch.

The next problem was the canopies for the TF-104G. Well I was very happy to have two extra canopies from the Revell kit RF-4C (yes that's right!). These canopies have just the right proportions for the TF-104. I changed their shape and formed them in hot water. The middle part of them made from the canopy of Revell's Tiger Moth kit in 1:32 scale. The solid canopy behind the back cockpit made from transparent plastic sheet again formed in hot water.

I had to put the details inside the canopy frames. This I made from plastic styrene and wire together with some mirrors from photoetched parts from the spare box. 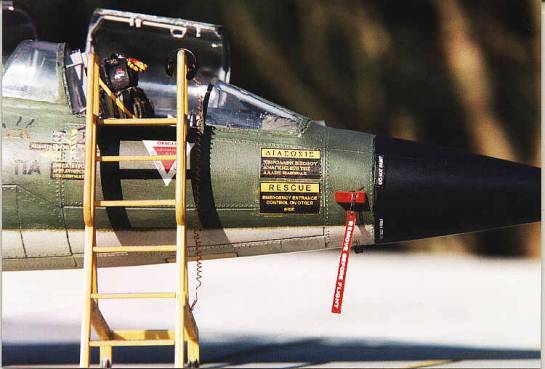 The two-seat versions of the 104 had their nose gear well moved back 7.4 inches and the gear located at the forward end, retracting rearward. I closed the single seat gear well hole with plastic sheet and opened a new one at the end of the former. I used also the nose gear well from the kit but in reverse direction. The nose gear itself had to be changed, so I cut the shock strut and the retraction arm, turned the gear strut in the new direction and glue both parts on it again. The gear door had a rectangular shape, so I had to cut off the angled pieces in front of the doors. The main landing gear in the Revell kit has poorer detailing than the Hasegawa one. But there are rubber tires and with some work here and there you can make a masterpiece from it. Otherwise the main gear details (hydraulic lines etc.) are all there in the Revell kit. 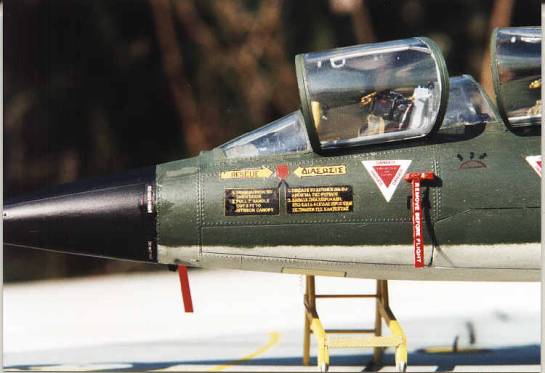 I had to change the wing pylons of the kit cause they are basically wrong! The right ones should be longer and higher. I made new ones from thick plastic carved to shape. I used the wing tanks from the spare kit to make two underwing tanks out of them. Those tanks are different from the tip tanks. Wing tanks had the same fins left and right and no fin extension underneath. 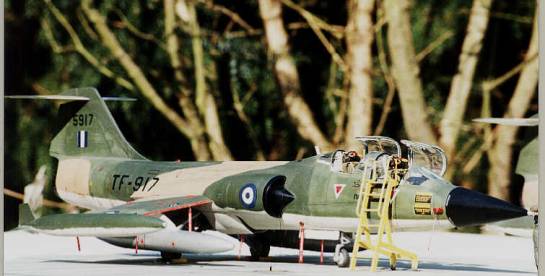 The jet nozzle from the Revell kit is a crude one-piece affair with not many details and too narrow, and so you must build a new one. The RF-4C kit saved the situation once more. I used that kit to build a RF-4E and the J79-11 nozzles left over were available for other purposes. The Phantom nozzles are well detailed and all that I had to build was the primary exhaust flaps, which I made from plastic sheet roundly formed. 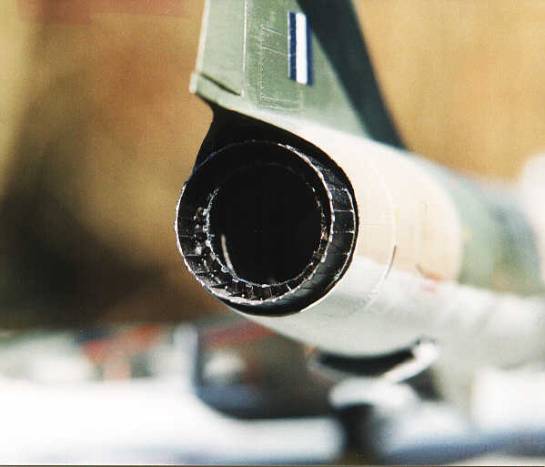 If you want to open the parabrake door, then do it before you glue the two fuselage halves. It's easy to build and makes the model more realistic. I also cut out the slats and flaps and glue them in the down position. The main gear doors were slightly bulged to make room for the thicker wheels and tires of the G-Type. I made those bulges from putty (if you have the Hasegawa kit, they are ready molded on the doors. 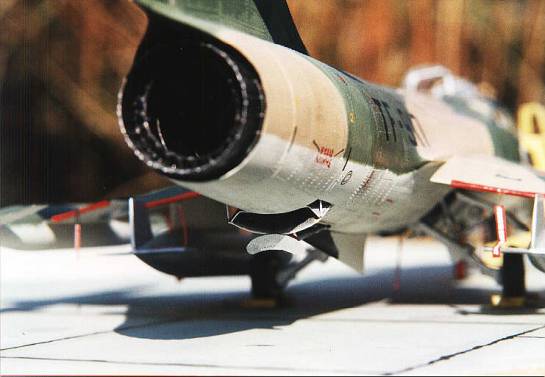 As I wrote above, Greek Starfighters after 1972 were painted with the typical SEA colors (two greens 34079 and 34102, a tan 30219 and a light Grey 36622). I used Humbrol enamels for that job, but I had to put some white (20-30%) to make them lighter. The radome shows the origins of the aircraft: light grey with black antiglare surface means a MAP aircraft, overall black means ex Luftwaffe aircraft, overall light grey means ex-Bundesmarine aircraft (German Navy). 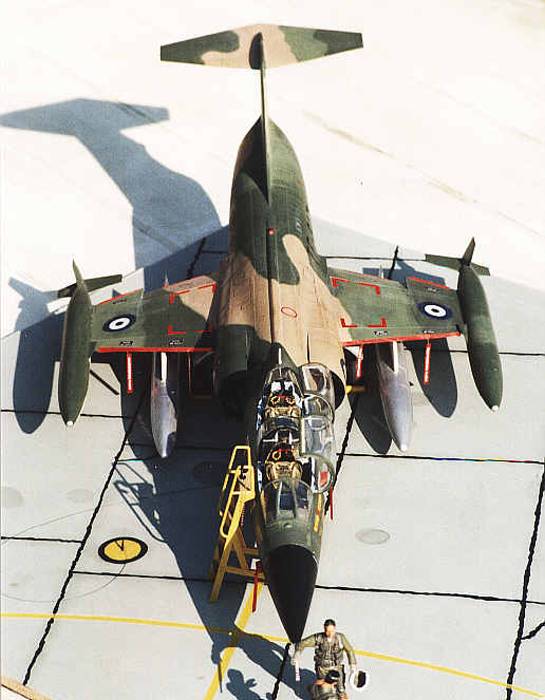 I chose to build Starfighter with Luftwaffe No 5917 (ex 27+87). TF-104s carried a buzz number on the fuselage with two letters: TF. Greek F-104s had many warning stencils written in Greek and there are no such decals to buy. To make them I drew them with a graphic program (Corel 7.0) and printed them on transparent decal. The Greek roundels and the "remove before flight" flags are from Plastimodelismo a Greek company. The buzz number with the TF letters came from Verlinden Productions sheet for USAF letters in 1/48. 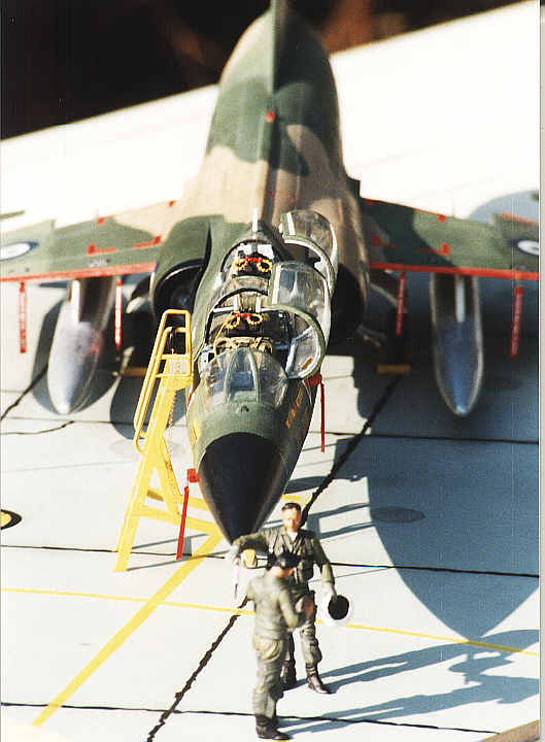 I put the aircraft on piece of wooden plate that I painted before. The two pilots are one and the same figure from Verlinden with another head and arms on one. Their heads are from Verlinden Productions (German Heads WWII). The instructor is showing his student how he could better maneuver the machine after their flight. The student's helmet and the boarding ladder came from Hasegawa's F-16C/A+ kit in 1/32 scale. The headphones were found in the spare box. 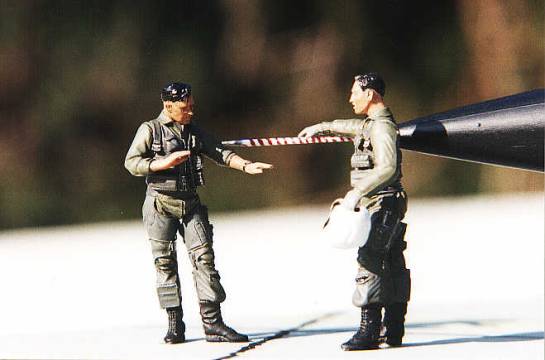 If you have enough money to spend on the Hasegawa kit, it is the better kit and you don't have to make many of the secondary works on it to make it looking right. But I think with the Revell kit you could have the same result without any fear from destroying the model. The Q7 seat is not a must if you want to build a Belgian or Canadian or USAF F-104D. All in all this was a nice conversion and the satisfaction was guaranteed.