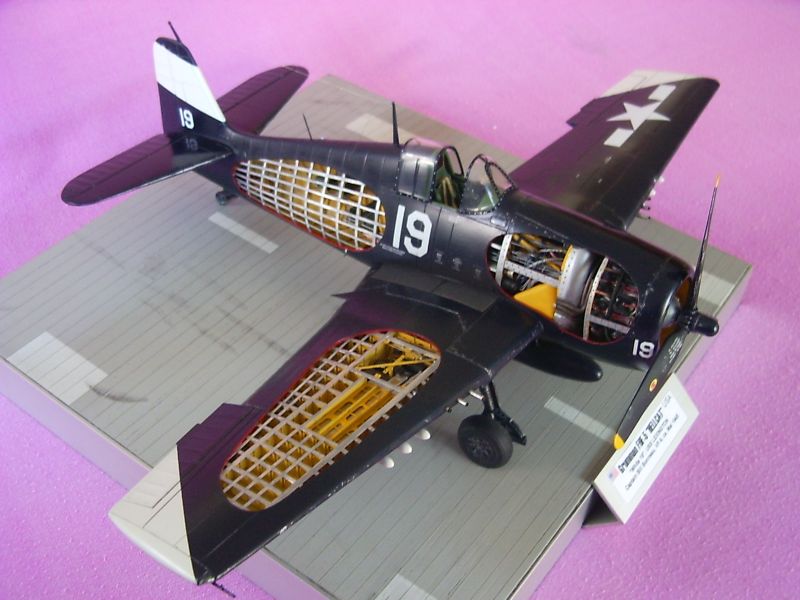 Bird Nr. 2 from the navy-collection is a real "monster", a Hasegawa Hellcat, also in a nice overall blue scheme with nice white markings. The Hasegawa kit is absolutely OK in shape and detail, although I had to do a few corrections to convert the kit into a late mark F6F-5 , so for example the cowling flaps had to be modified. Work starts a usual with the motor: the Hasegawa P&W is OK and was detailed with wiring and more, as you can see in pis further below. Next step, as usual, was starting the fuselage framing. Main spars ( firewall and cockpit front spar) were mounted, made from styrene, and the fuselage stringers, also stripes of styrene, were glued into their places in each fuselage half. 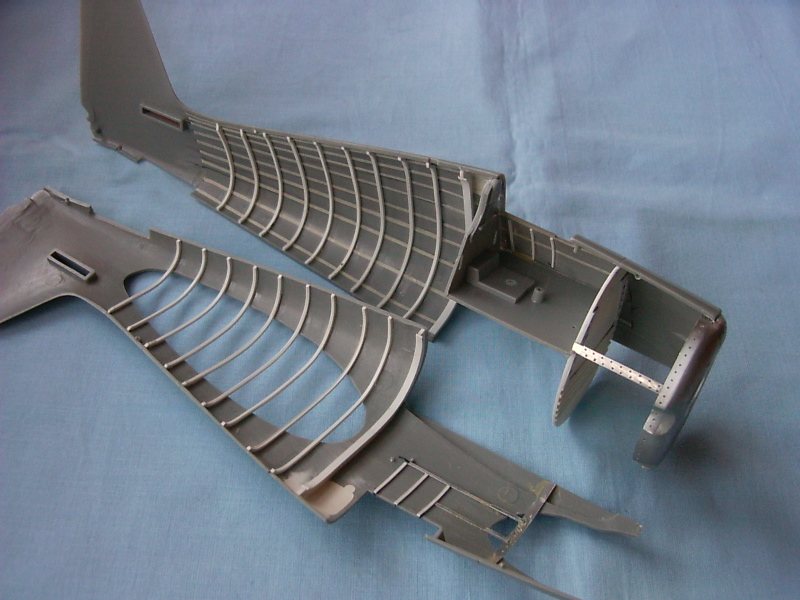 The next step was the cockpit (completely scratched, except the cockpit floor), motor mount (aluminium tubing) and several liquid tanks (made from a solid block of Balsa, sanded into shape) 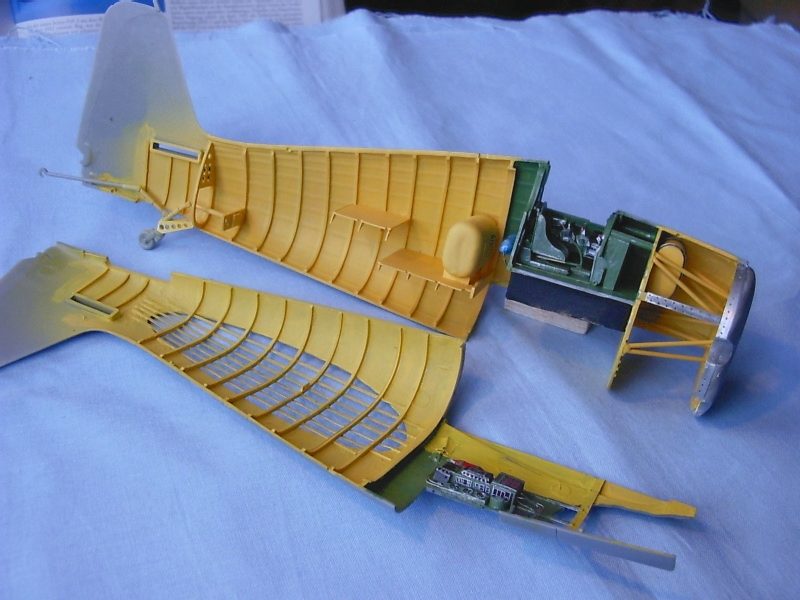 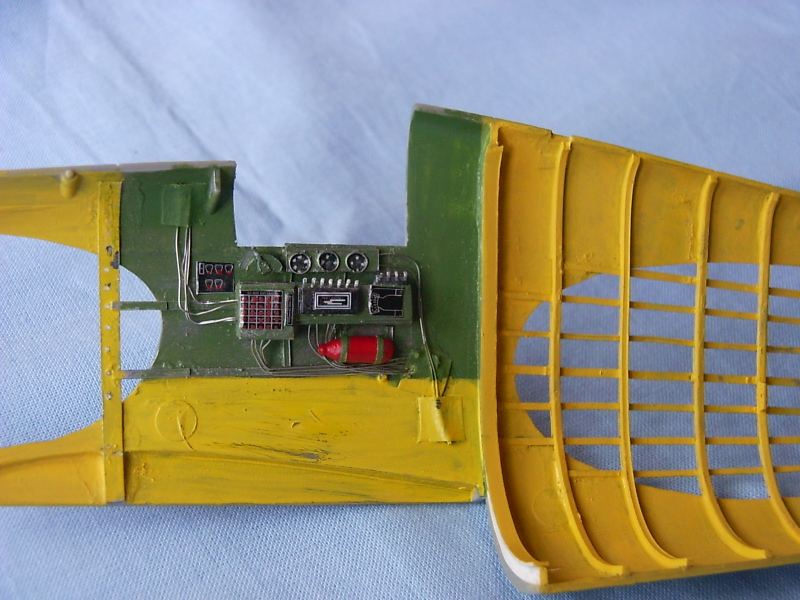 After the whole thing was painted (interior green cockpit, zinc-chromate fuselage construction) the wiring for the rudders in the back fuselage was done, also radios and some more details were added before gluing the fuselage halves together. 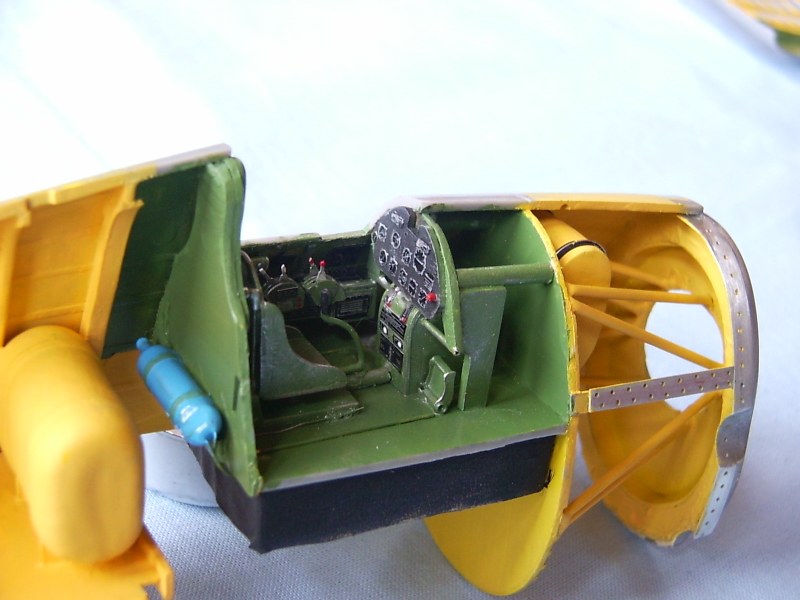 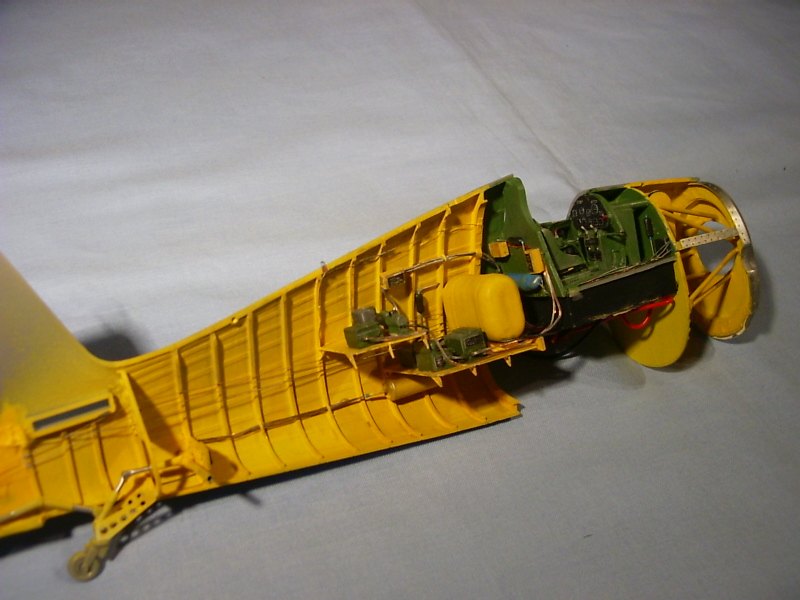 After the motor was inserted more detailing was done, especially the area behind the firewall was filled with cooler channels and lots of wiring. 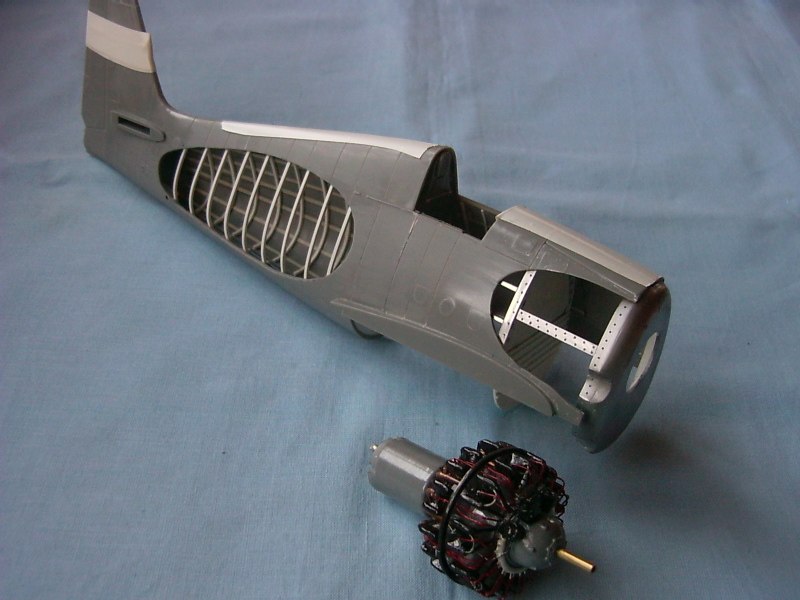 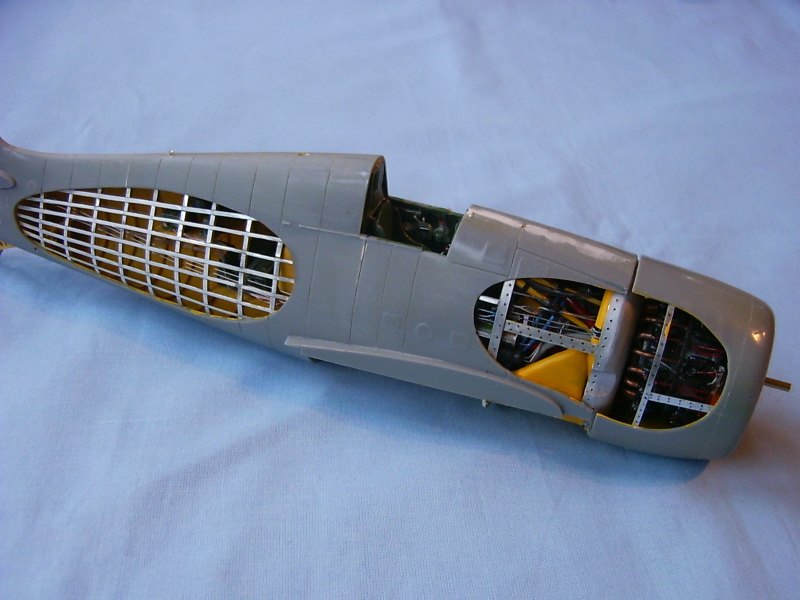 One of my favourite steps while doing my cutaways always is the wing. Although every wing of a plane (normally) has main-spars, ribs, stringers and the final metal skin there are many differences in the wings of different planes and so the construction of a cutaway wing always is a real challenge. The first step is to mark the cutaway opening (through which the internal construction can be seen) on the upper wing half.

Then the complete structure is build from styrene, starting with the main spar(s) and channels for Guns and ammo belts, then continuing with the ribs. Although each ribs is cut and sanded into the right shape individually this is real modelling fun! 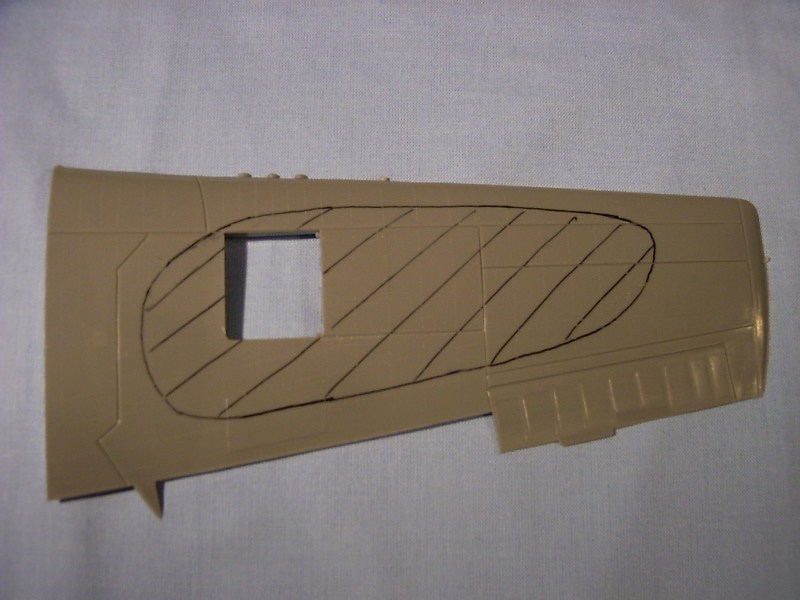 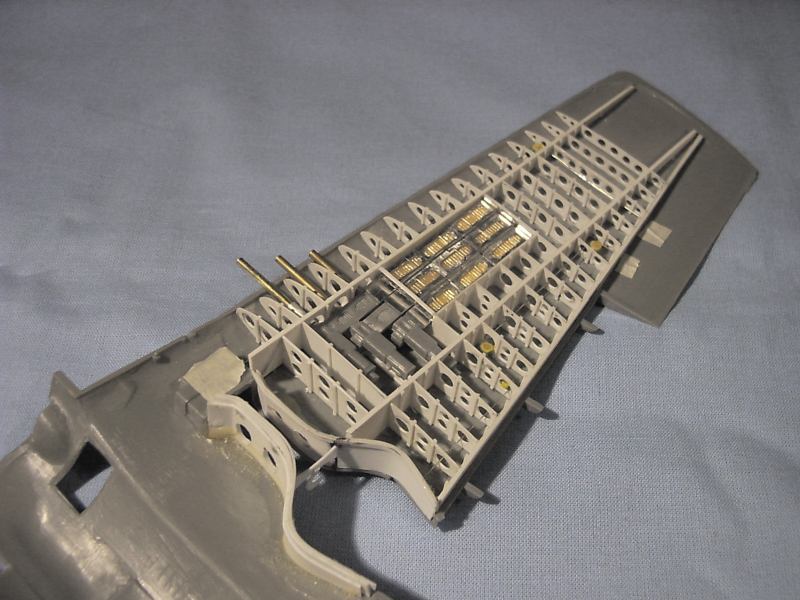 Although sometimes it´s bit of a sin to paint the finished construction.......it has to be done! So again the framing is painted in zinc-chromate green, details in ammo belts and guns were added and finally the wing upper/lower halves can be mated. 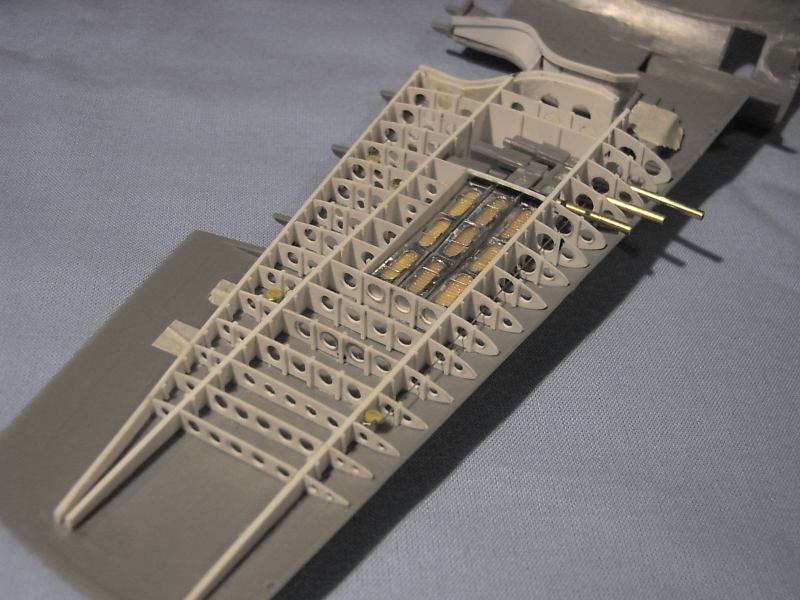 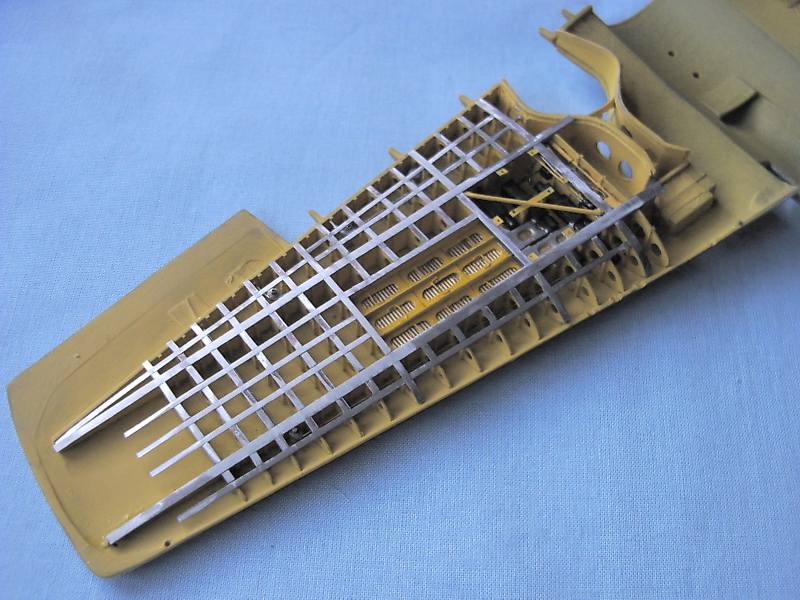 After mating wings and fuselage together the main work was done and while the bird was prepared for the paint job some small modifications were done, for example landing gear (modified with aluminium tubings), prop (modified JR resin prop for Thunderbolt) and modified cowling flaps (pieces of aluminium). Also the drop-tank mount was modified with some brass tubing and wires. 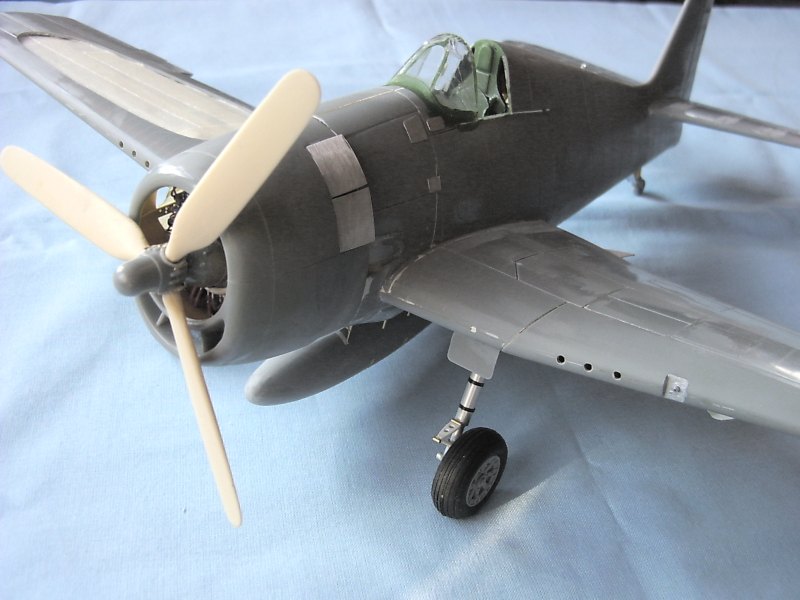 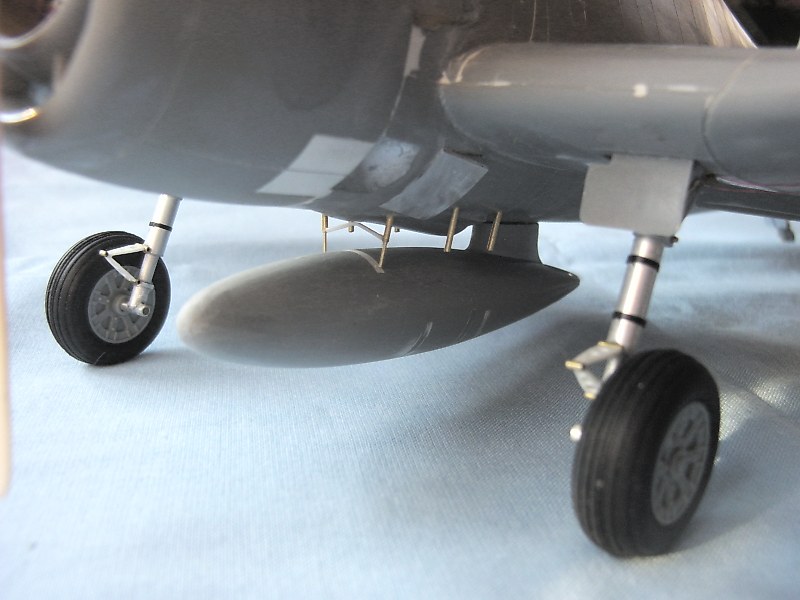 After the paint job was done the bird was finished with subtle paint chipping, exhaust stains and a bit of brushing pastel chalks here and there the „babe“ finally got her base. The carrier deck was made from balsa wood 2mm and simply painted with a grey car-filler.
Again to all LSP-mates who helped with references and pics...Thanks a lot! 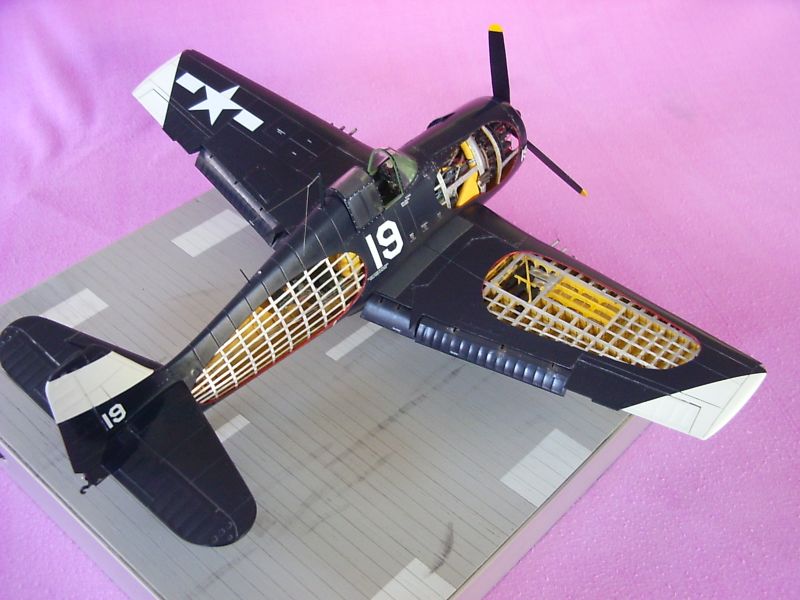 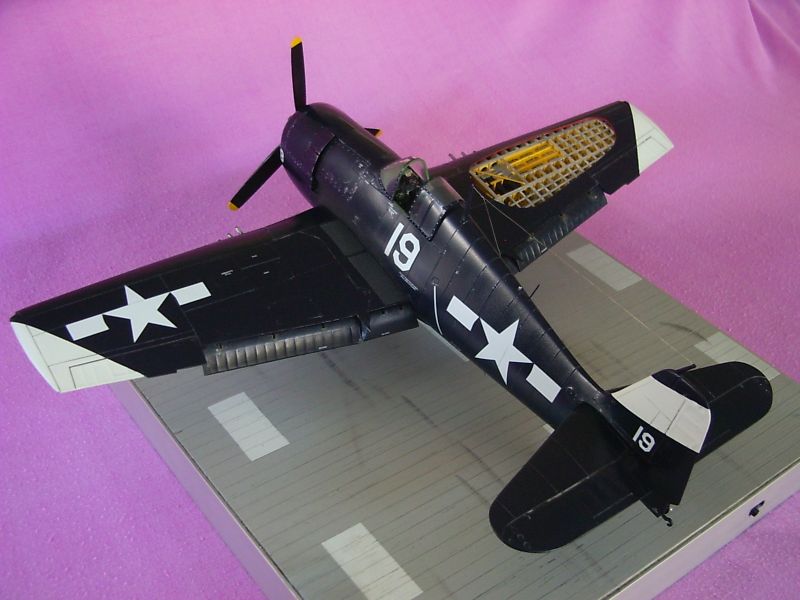 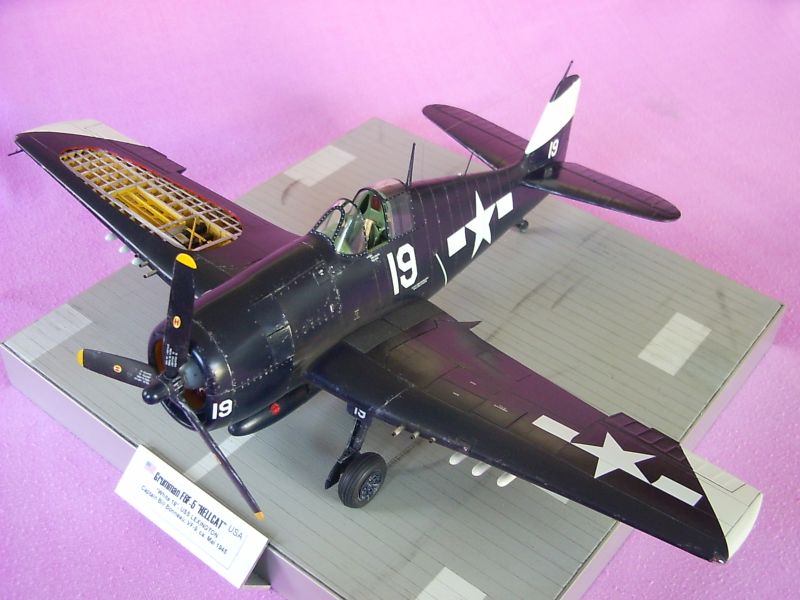