The Hawker Hurricane was the first of the British monoplane fighters to fly. It could be found in all theatres of World War II. Produced in three countries, the Hurricane became a stalwart defender in the battle for France, and Battle of Britain, served in the Winter and Continuation Wars (on both sides!), was first to defend in the Desert, and South-East Asia Command. In addition, it served as a night intruder, photo reconnaissance platform, and flew from Royal Navy carrier decks. However, you may not know that two factory-owned Hurricanes wore civil registrations! To the best of my knowledge, the only civil registered, factory-owned, Hawker Hurricanes out of over 14,500 units produced, were G-AFKX, formerly RAF serial L1606, and G-AMAU, RAF serial PZ865, famous as the “Last of the Many”. These airplanes are at opposite ends of the production run, L1606 being the 60th production Hurricane, and PZ865 being the last. G-AMAU also had an air racing career, but that is another story.

G-AFKX (C/N W05436) was previously RAF serial L1606, a fabric winged Hurricane Mk. 1 of the first production batch. Originally assigned to No.56 Squadron RAF, L1606 appears to have suffered some damage, and was returned to Hawkers. Subsequently Hawker Aircraft Limited bought L1606 back from the RAF, and used it as an engine and propeller test bed. “King X-ray” was rolled out of the factory on Jan 24th, 1939, finished in a scheme similar to the Hurricane prototype, i.e.: silver doped fabric and polished metal panels. It also appears that the radio and guns were removed at this point, as there is no rear-view mirror, radio mast, or gun ports visible in the available pictures. Given the polished finish, and the weight reductions, it is no wonder that the Hawker chief test pilot, P.W.S. (George) Bulman, was able to set a Hurricane “speed record” of 345 mph. in G-AFKX (Per Reference 7). Even the Hurricane IV, with 30% more installed power from a Merlin 32, did not exceed this speed. Metal wings were fitted in June 1940, by which time G-AFKX was apparently wearing camouflage with medium sea gray registration. The civil registration was cancelled post war, apparently long after the aircraft was broken up.

The following also applies to a RCAF HWE early Hurricane, with the exception of the finish.

Kit alterations and improvements made

The wing was converted to the early “fabric” wing. No radio mast was added, the radio hatch (after-most hatch on starboard side) was filled in, gun ports were faired over, and the landing lights were moved one rib inboard from the kit location, then detailed with lamp mounts. Also needed was a new rounded propeller spinner of reduced diameter, and the early Hurricane windscreen. Additional piping and cabling was added to the cockpit, representing what the pilot might be able to see. 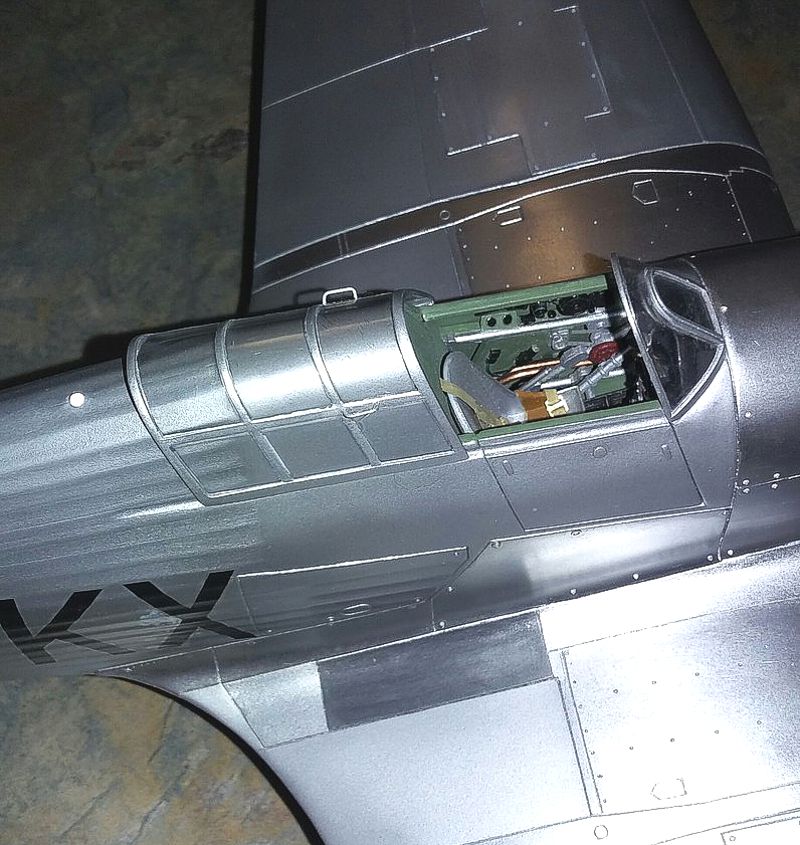 I did not include the engine, as I wished to save it for a Spitfire IX conversion! The parts used were the exhausts and the supports for the Electric motor option, which were painted Alclad Burnt Iron. The exhaust shields, parts 256 & 257, were left out. A mount for the propeller was made from sleeved Evergreen tubes. Note that the exhaust stack with the circular opening is the aftermost one. The instruction part numbering is incorrect. Stage 2 was omitted. 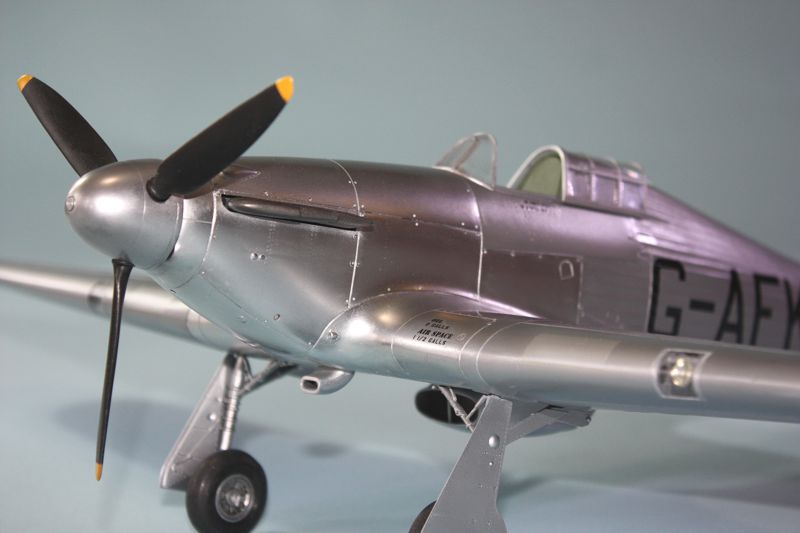 On rollout from the factory G-AFKX appears to have had Rotol propeller, but the interesting thing is that it is closer fitting than the Airfix supplied “Darth Vader” helmet, but more like the Spitfire II rounded spinner. I reduced the diameter of the kit’s spinner back plate to 28mm, leaving it about 1.0 mm bigger than the cowl diameter. The spinner itself was shortened by sanding until its’ diameter matched the back plate. This also necessitates moving the propeller openings forward to fit. Opening up the “cheek” scoops (at the 4 o’ clock and 8 o’clock positions behind the spinner) also improves the look. 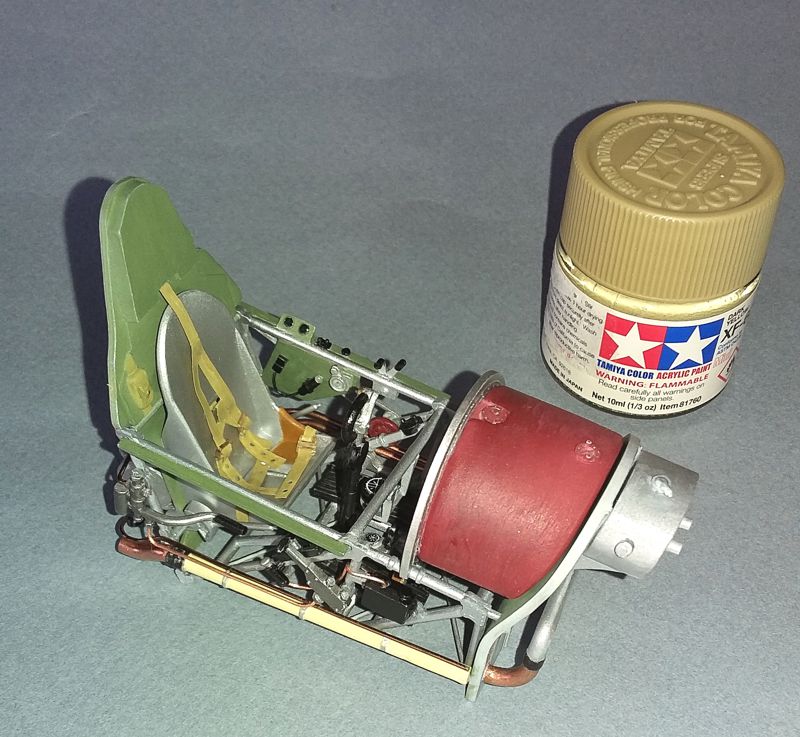 The cockpit had piping added, most noticeably the oil lines on the port side, and the hydraulic lines and de-icer pump line to starboard. Other additions were the landing light control, and the emergency undercarriage release, which was a pedal by the pilot’s left foot board. Note the cockpit tubular structure as supplied by Airfix is missing three of the structural members. These need to be added, using 0.050 plastic rod: the cross tube under the rudder pedals, the lower firewall cross tube (the main spar top tube), and the diagonal tube from the port side lower to the starboard side upper joint at the firewall. The final touch was addition of the bracing wires under the cockpit. 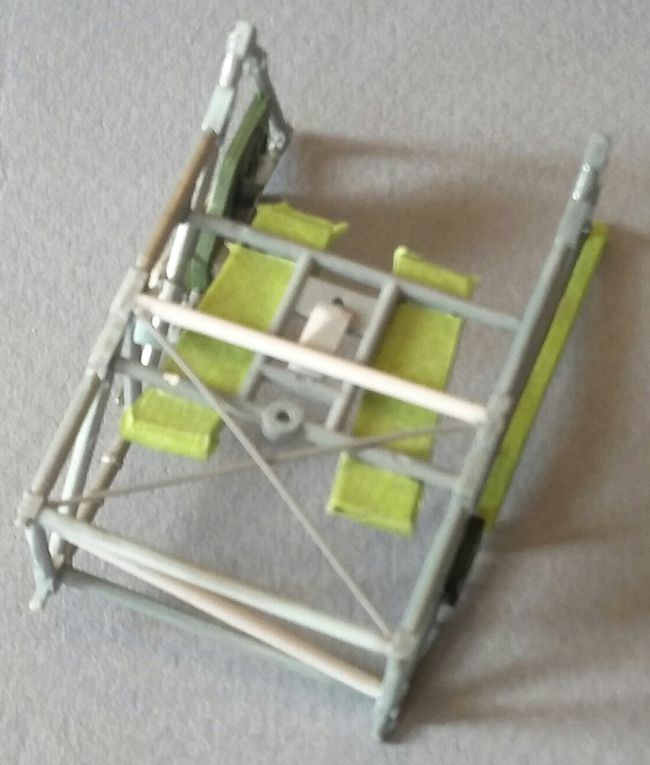 When done the space frame and seat were painted Alclad White Aluminum, with Humbrol no. 78 Cockpit Green sidewalls and black floor boards. Airscale decals were used to improve the instrument panel, after a coat of semi-gloss black. References 6, 7, and 8 are invaluable for this work. The seat harness was made from painted printer paper, moistened with a water and PVA glue mixture, and draped over the seat. 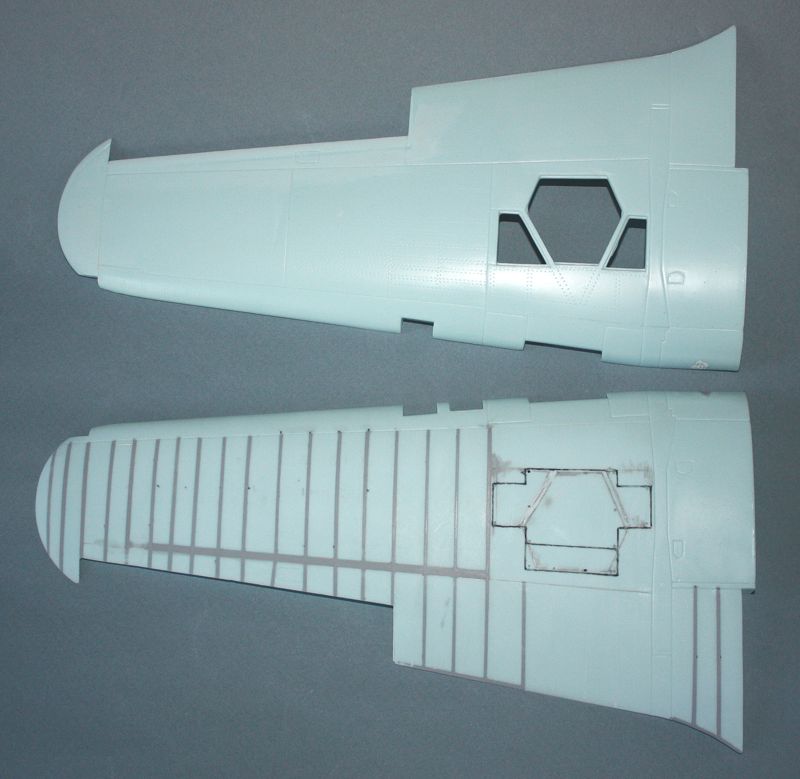 Stage 13 was omitted, as the aircraft appeared unarmed. The Browning gun panels are a different shape from those on the metal wing in the kit. The kit hatches from stage 20 were glued in place and the outline of the early ones scribed into the wing upper surfaces. All rivet detail was sanded off. I had originally intended to simulate the rib tapes on the fabric wing using 0.010” X 0.040” Evergreeen plastic strip, sanded down, but the wing ended up looking like that of a Junkers 52! I then tried to paint 1mm wide stripes of Mr Surfacer 1200, but that did not work well either. The best solution was to leave the wing as is, after removing the rivet detail. I did add 0.005” strip to represent the doubled fabric tapes over the main and after spars as an afterthought. The gun ports and cartridge chutes were blanked off. Note that some of these are in different locations than the metal wing layout, and the gun bay underside is fabric. It also appears that the person who tooled the moulds for the ailerons did not talk to the fuselage toolmaker, or the rudder and elevator toolmaker! All have different rib taping detail. The rudder, ailerons and elevators had all rib detail sanded off after assembly. 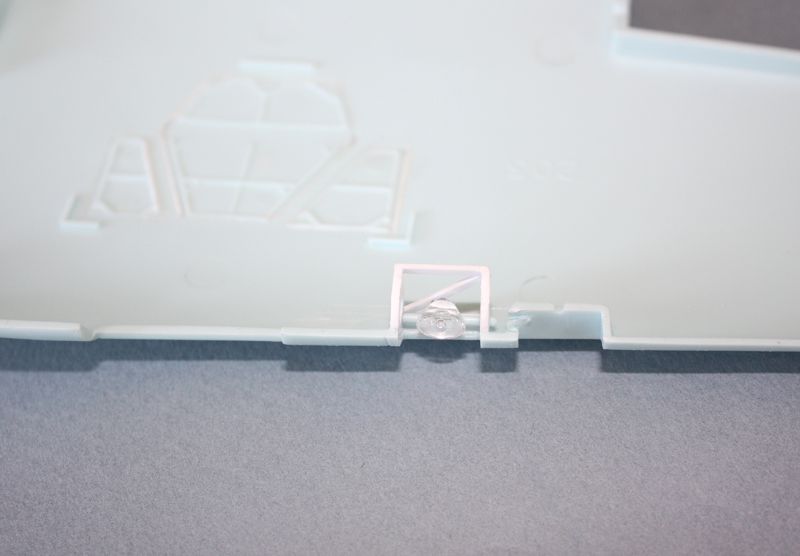 New landing light locations were cut out, and the off-cut pieces were used to fill in the original locations. I replaced the clear plastic landing lights with some MV railroad lenses from my spares box. Pictures of a Finnish Hurricane restoration on the web show the landing light support structure is composed of leading edge nose ribs with lightening holes open to the wing interior at the sides, and a false spar, with the lamps attached to a tubular structure. 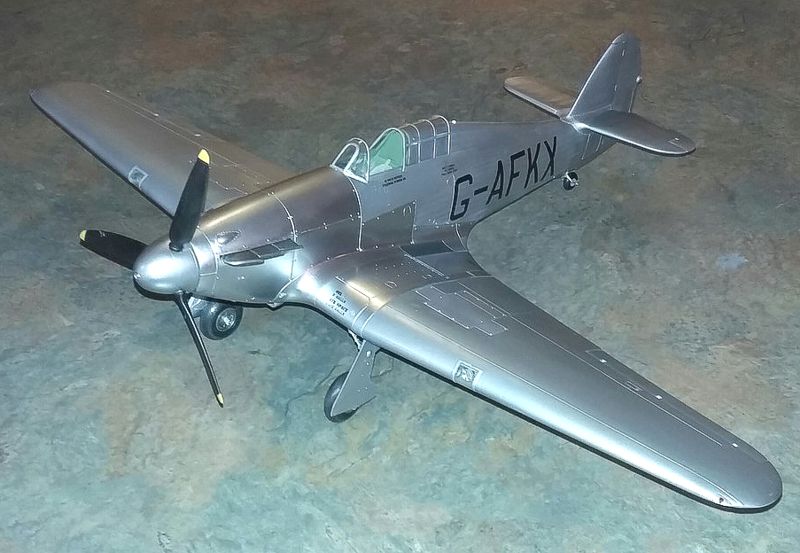 The Airfix wing is visibly too thick at the tip, partially due to thickness, and partially due to Airfix starting to taper the wingtip thickness too far outboard. A comparison to the Trumpeter kit gives about 1 -1.5mm difference at the wingtip panel line. I sanded 0.5mm of thickness off the mating surfaces of both the upper and lower wings at the tip to compensate, and also smoothed out the transition to the wingtip as best I could. This improved the look considerably. The under-fuselage radiator as supplied is correct for a Mk. 1 Hurricane. The interior received a coat of Alclad White Aluminum, and the grilles were coated with Alclad Magnesium before adding to the wing undersurface. 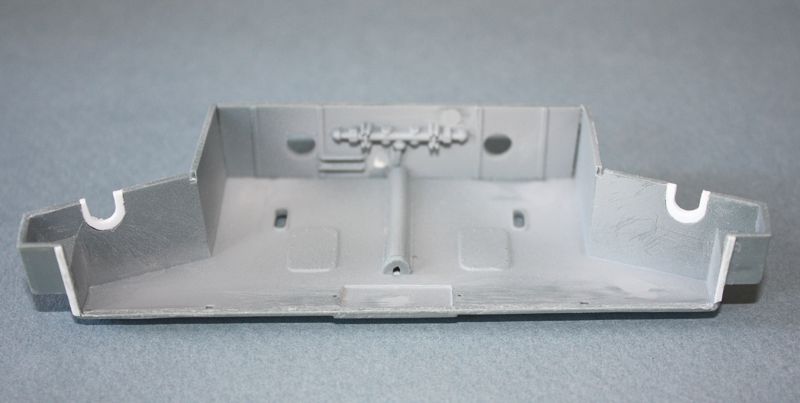 Landing gear bays were “straight from the box”, with added “U” shapes to match the strut troughs in the wing. There are a few ejection pin rings that need attention with filler. The main engine coolant line was altered to the port side, as the kit has it wrong! Early production Hurricanes had viewing ports to allow the pilot to check the undercarriage position, so I opened these up. These are represented by the smaller lozenge shapes in the wheel bays. 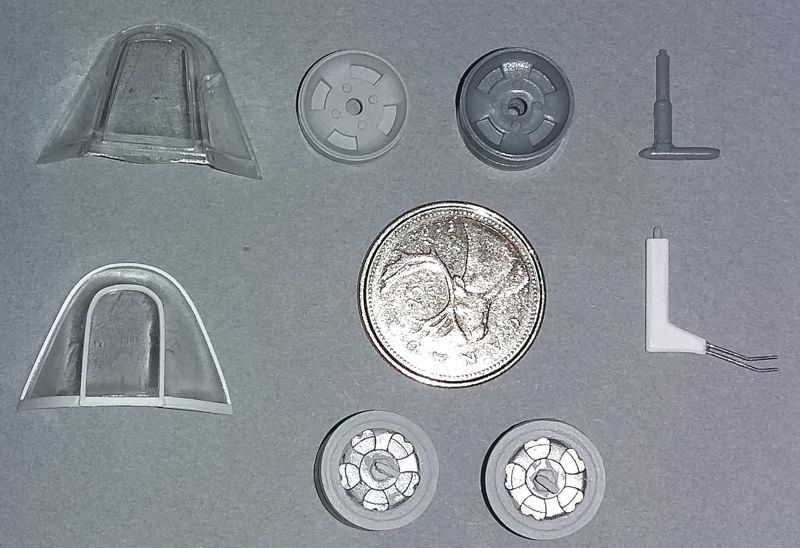 The wheel hubs for an early production L- serialled Hurricane were of the 5-spoke variety. My Spitfire Mk. I kit gave up its’ wheels in exchange for the 4-spoke Hurricane ones. The rudder control cable runs were drilled out, and the cables simulated with stretched sprue. Canopy grab handles were added to the side horizontal frames, using bent staples. The radio hatch was not added to production airframes until mid-1940 (reference 10), so I filled it in. As the available photo of G-AFKX is taken directly from the side, the windscreen is not clearly visible, but it seems to have an early windscreen, so I carved an early curved windscreen from pine and plunge-molded a replacement. 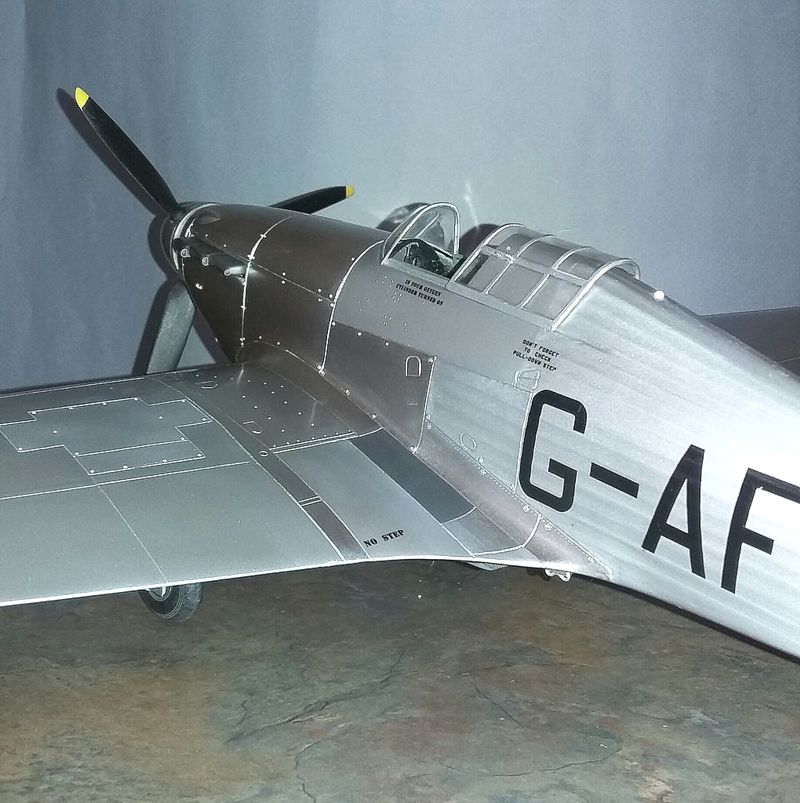 As this is a “roll out” build, no weathering is visible on G-AFKX, not even an exhaust streak! The propeller spinner, engine panels, and fuselage side panels, back to the cockpit were all highly polished to a mirror finish. The whole airframe received a coat of Mr. Surfacer 1500, in preparation for the aluminized finish. Metal panels were polished with worn 2000 grit wet sandpaper and then given a coat of Gloss Black Dupli-color, before the Alclad was sprayed on. A black undercoat is a necessity for the very high shine finishes. I originally used Alclad Gloss Black base, but I found that it dissolves readily in paint thinners, much to my horror! I then switched to a lacquer-based Dupli-color gloss black from my local automotive store, (the one with the red triangle logo). Be warned, Alclad finishes require 24 hours drying time at least, before handling or re-finishing! I found White Aluminum to be the easiest to use, as it withstands rough handling during assembly and finishing. I used Alclad High Speed Silver for the fabric areas and Alclad Polished Aluminum for the polished metal. Un-polished metal areas were Alclad White Aluminum. The painting order was fabric areas first, then the un-polished metal, and finally the engine cowling and spinner. There’s one metal access panel under the port tail-plane which needs the un-polished metal treatment as well.

Pictures of G-AFKX in Hawker’s hands show the registration in Black 24” letters on the Fuselage sides only, and a full set of DTD finish markings as applied to Hurricanes. On January 24th, 1939, L1606 was rolled out from the Hawker Factory, where official photographs were taken. The aircraft was not weathered at this time, which makes “King X-ray” look like the Fury monoplane it was. It does not take much imagination to visualize this aircraft in a mid-thirties scheme with rudder stripes! 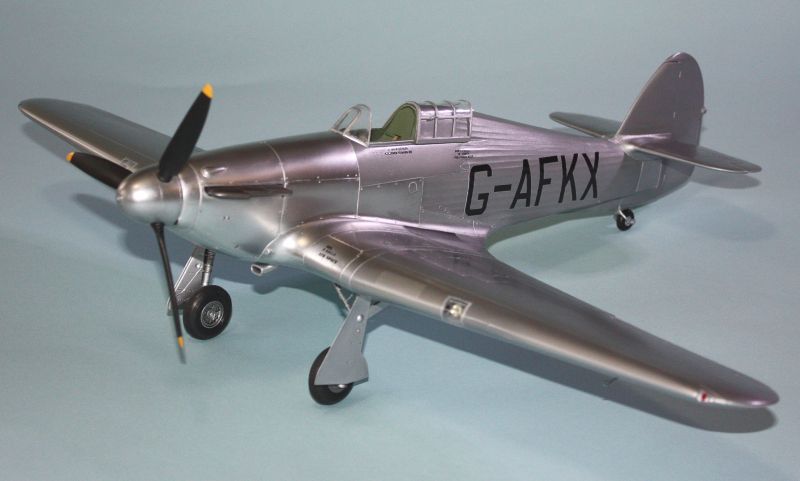 I downloaded the fonts for the RAF WW2 code style from the Internet and used them to get a set of 24”x15” black letters printed on decal film by a friend with an ALPS printer. The registration fits neatly between the vertical fin and the aftermost polished metal panel on the starboard fuselage. The letters seem to be spaced 6 inches apart or double the width of the vertical bars on the letters. After the application of a coat of Future acrylic wax, King X-ray was done! 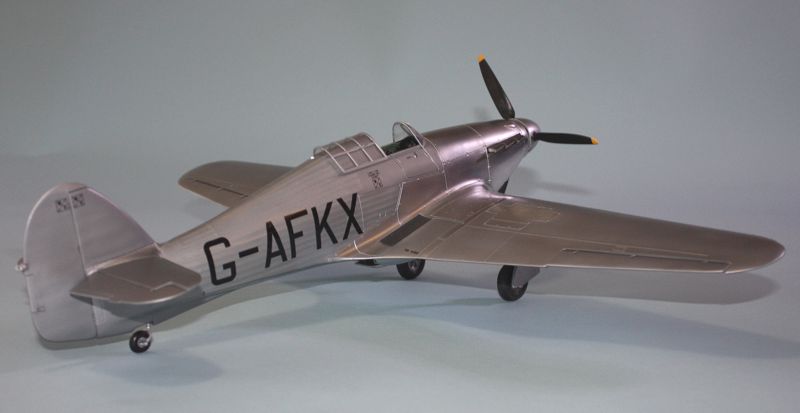 This was the first of the Airfix “Superkits” that wasn’t toy-like, probably due to the impossibility of folding the landing gear. It had a goodly amount of detail for its time, and still builds up into a credible replica of a Hurricane Mk. 1. I built my first circa 1975, King X-ray being the second, and my first attempt at a full-blown metalized finish. If you’re up to the challenge of scratch-building a few small improvements, try this kit. You won’t be disappointed. My metal finish isn’t perfect, which I attribute to my steep learning curve, and the limitations of my painting environment, but the next one will be much improved.