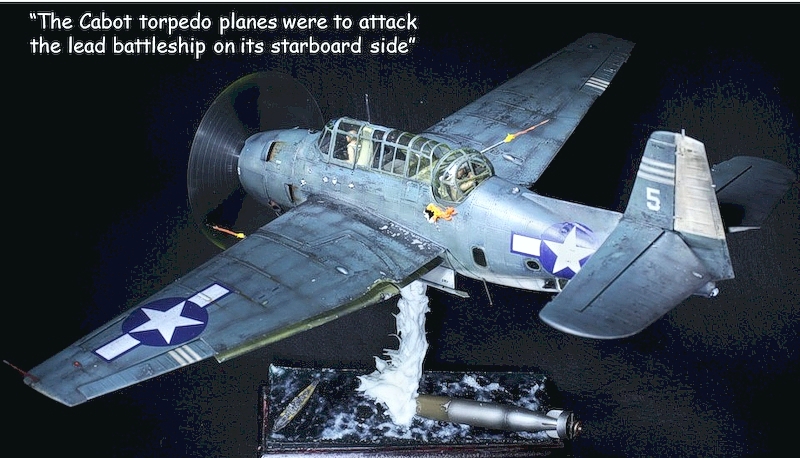 Commissioned in mid-1942, Musashi was modified to serve as the flagship of the Combined Fleet. During the Battle of Leyte Gulf, Musashi was sunk by an estimated 19 torpedo and 17 bomb hits from American carrier-based aircraft on 24 October 1944. Over half of her crew was rescued. Her wreck was located in March 2015 by a team of researchers employed by Microsoft co-founder Paul Allen. A recent wreckage dive in 2015 had uncovered that it was a main gun emplacement explosion that actually did the Musashi in. 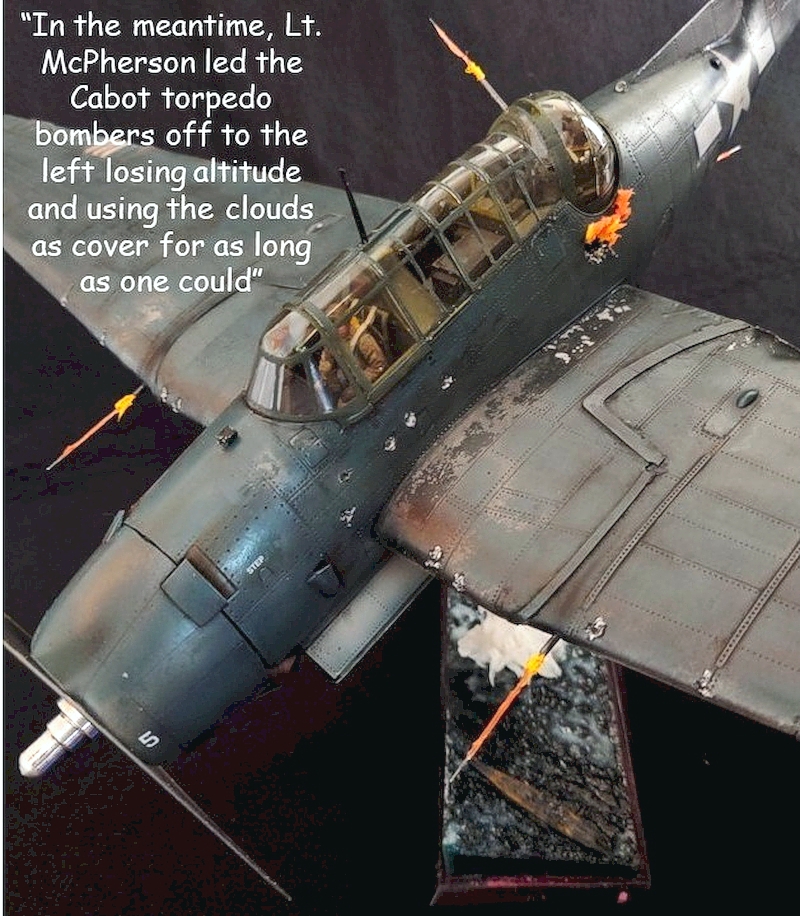 The Task Group sent out to engage the Musashi and Yamato consisted of the USS Essex (CV-16), Hancock (CV-19), Intrepid (CV-9) and the Cabot (CVL-29). The CV’s carried 92 aircraft; 56 F6F fighters, 18 SB2C dive bombers and 18 TBM torpedo planes, while CVL’s carried 24 fighters and 9 torpedo bombers. The other ships in our Task Force were one to two battleships, four to five cruisers (light/heavy), with 13 to 15 destroyers. 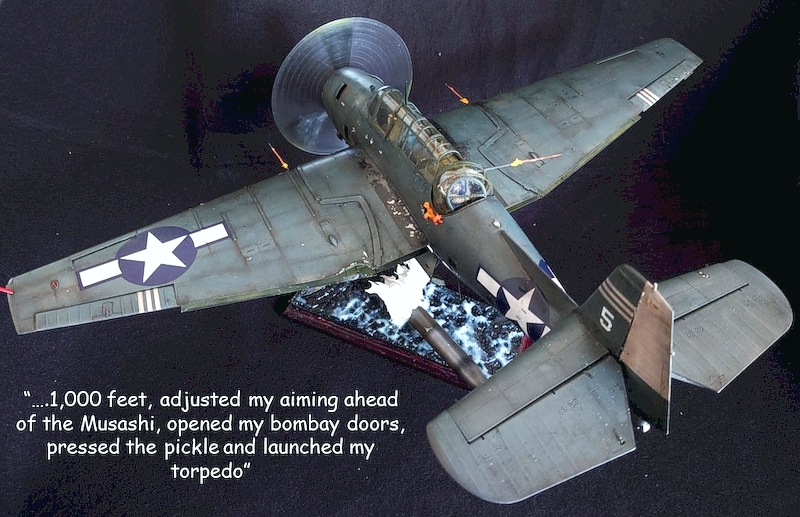 The Cabot torpedo planes were to attack the lead battleship on its starboard side, while the torpedo bombers of the Intrepid would attack on the port side of the same battleship. The sequence would be: Cabot fighters, not carrying bombs would strafe ships on the starboard side of the lead battleship, they were followed by the Intrepid dive bombers. Then the Cabot fighters with bombs dove on the target and strafed in the dive and then dropped their 1,000 pound bomb with a pull out at 1,500 to 2,000 feet. Only then would the torpedoes be launched. 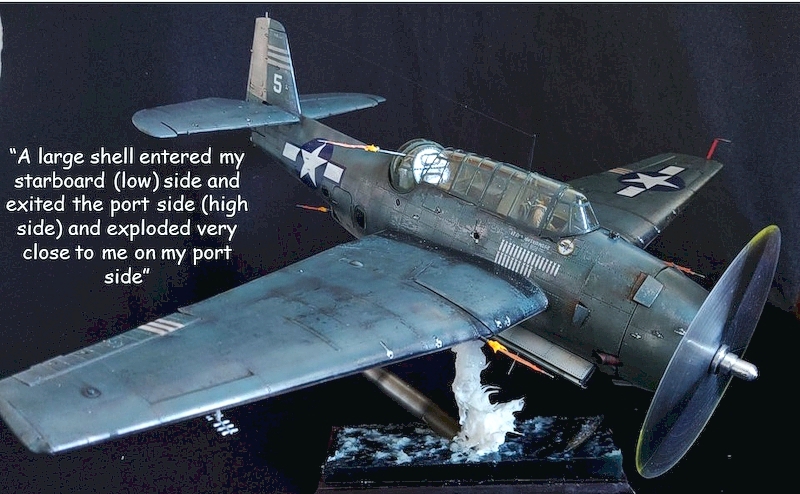 This diorama is based on an interesting story of the engagement with the Musashi. You can read the account from Lt HH Skidmore here. I have appended his quotes to some of the pictures.

Dioramas of this nature need to be dramatic to be eye-catching. I decided on forced perspectives and action to make the flights, fires and fights believable. I’d used sound and motors in the past but that typically isn’t very effective. Just watch a period documentary and decide for yourself. The main plane the TBF Avenger would be just pulling away as the torpedo hit water and the splash would support the plane. At this scale, the Musashi would have to be tiny. There would be flak damage from the ship and figures to portray the urgency of the encounter. 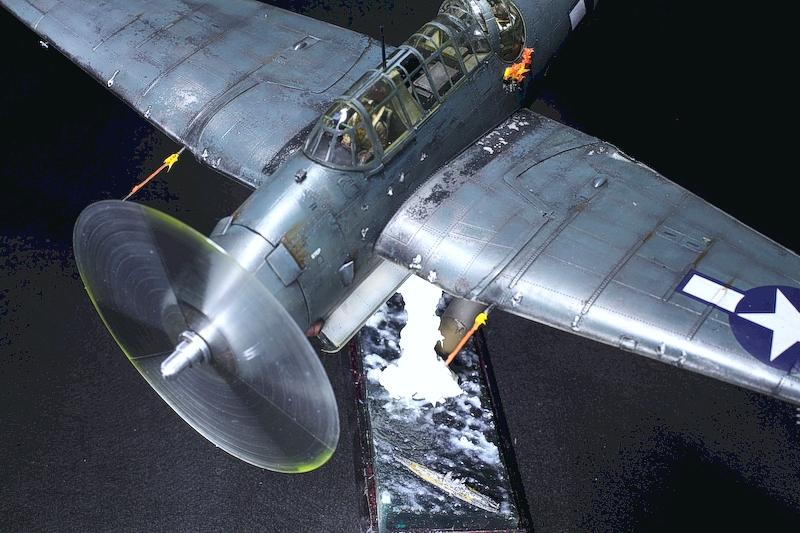 The kit was an easy build. All told it took less than a week to build it. There were no problems pertaining to fit and accuracy. The testiest problem is the folding wing but really not much of a deal. The ordnance is ample and redundant at multiple levels (i.e. loads of spares). Scratchbuilding was confined around the spinner and the torpedo propeller which were both aluminum turned on a lathe. The propellers were clear styrene. I find this method most reliable after many versions. I cut the disc out. I then make deliberate concentric circles. Spray the prop wash with a hard leading edge and soft trail. Coat with clear coat and sand it while spinning in a motor-tool. I then coat it in clear coat again. A short note about the instrument panel. I have seen some builders try to put the decals over the clear plastic panel. I chose instead to apply it behind the panel, mask off the dials and paint as per normal. It looks much better this way. Interior detail weathering was heavy. Basecoat of rust was followed with sand mixed in white glue. Then, thin black paint and the overcoat in interior light green with lighter shades of white. All of this was in Humbrol Enamels. When dry I just brushed the sand away. I don’t claim to have invented this technique, but it is described in my multiple articles on this site. The machine gun bullet trails were clear plastic sprue coated in tinted silicone sealant as was the fire on the portside. Magnets were used to attach the cowling enabling viewing of the beautiful Wright R-2600 Cyclone radial engine. 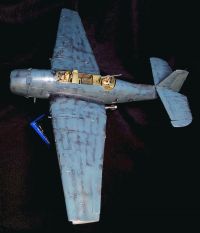 The base is a solid pre-fabricated base from High Planes Models. The seascape is poured epoxy resin tinted with blue green ink. The sea is acrylic paste modelled in such a way that the waves in the foreground are in 1/32 scale whereas those in the background are in1/4800 to suit the Musashi in the same scale. A metal rod comes up at the point of torpedo impact with water and that is hidden in the splash made from silicone sealant.

The markings for Lieutenant HH Skidmore were not provided in the kit so were hand-painted. I wanted the paint job to be heavily weathered so I base-coated with gunmetal. Again, I coated with the sand in diluted PVA mixture and finished off the tri-color and then brushed off the sand. The models were base painted in Humbrol enamels, varnished with Future-Tamiya Flat acrylic, weathered with turpenoids and chipped sparingly. I used oil washes for weathering and drop filters for colour variation. The worn silver was a combination of sponge dabbing, silver pencil and undercoat with black and brush painting silver. All markings were a best-guess paintjob based on the few photos available.

The figures are from PJ productions modified to suit the poses. All figures were painted in Acrylic. 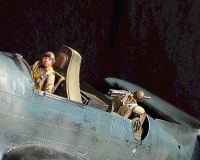 This is the third of a series of three dioramas featuring the sinking of a famous battleship. Unlike the accounts from the other two (Sinking of the Bismark and Turning point, Midway) it is striking that it is unclear who actually dealt the fatal or first blow to the Musashi.. Accounts suggest that the first hit was by Lt HH Skidmore of VT-29 of the USS Cabot that struck the first blow, for which this diorama is based on. 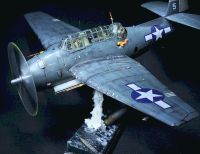