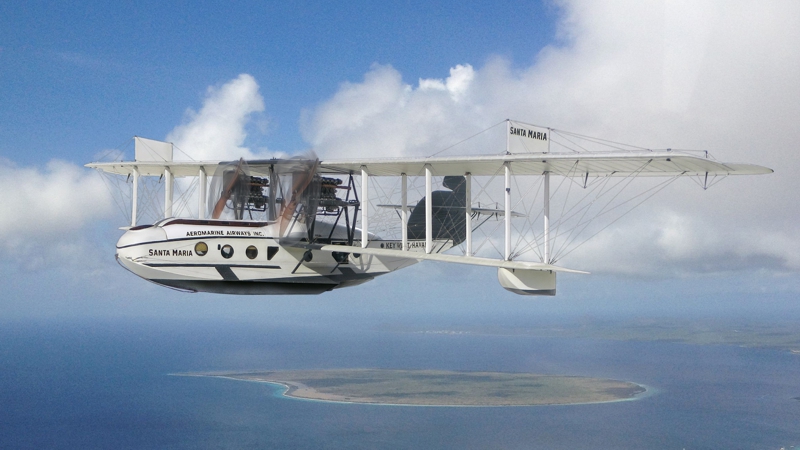 This is a conversion of the Wingnut Wings Felixstowe F.2a flying boat into one of the first real passenger/airways aeroplanes. The Aeromarine 75 were surplus US Navy Curtiss F-5-L flying boats from WWI, which were converted into carrying passengers. The original company, 'Aeromarine West Indies Airways,' was one of the first international airlines in the United States. Aeromarine began operating flying boats in 1920, transporting passengers, mail, and freight from the United States mainland to the Bahamas and Cuba. In 1922, Aeromarine began transporting passengers from New York to Cuba, on a two-day trip nicknamed the "Highball Express." This nickname was earned, because many of the passengers were trafficking in alcohol, which was illegal during Prohibition (1920-1933).

I used the Wingnut Wing Felixstowe kit from their ‘duelists’ kit plus a set of extra wing sprue's. I completely forgot that the 'Duelists kit' contains the early Felixstowe, so I had Richard and Dave of WNW send me the parts from the 'late' version along with the kit, as I needed the ‘late’ sprue for the late type balanced ailerons needed for the F-5-L. 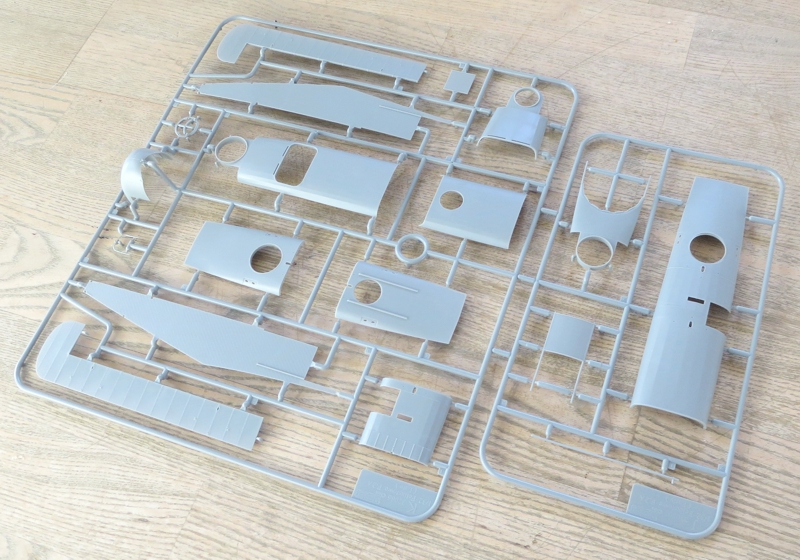 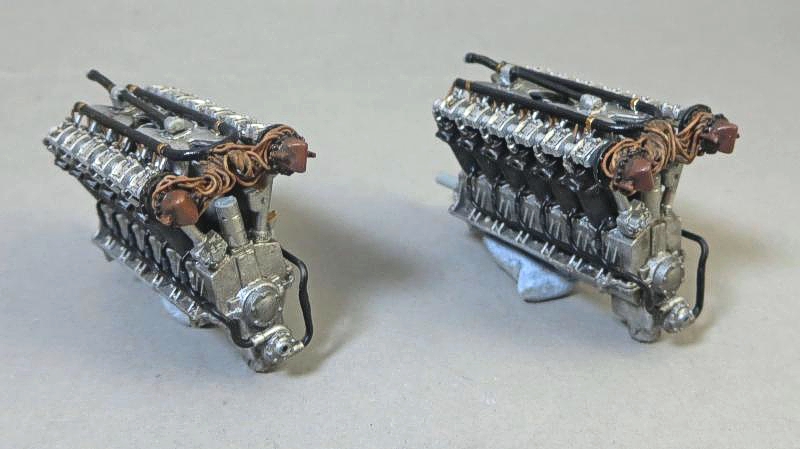 The major challenges were the larger size of the F-5-L/ Aeromarine 75 hull and wings. I was pretty sure how to lengthen the hull, but the wings were another matter... 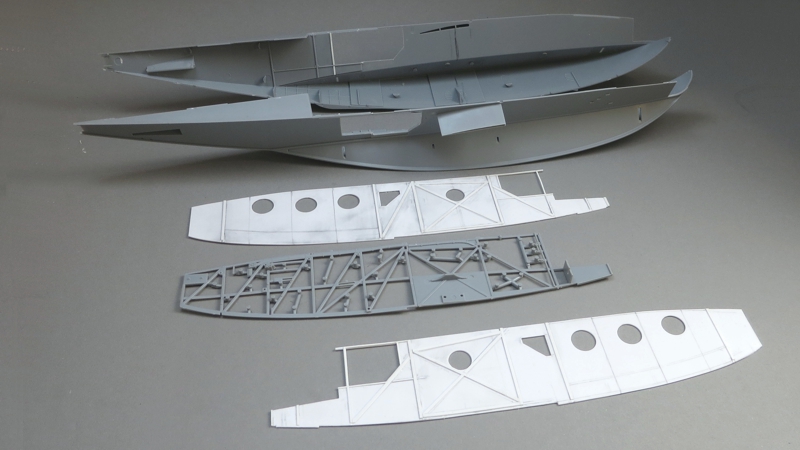 The approach I took is to scratch build an interior 'box' using the kit parts as templates, adding the extra length and then cut the fuselage halves and fit them onto this 'box' and add the missing parts of the exterior of the hull when assembled. This will also add the wooden panels to the interior walls. 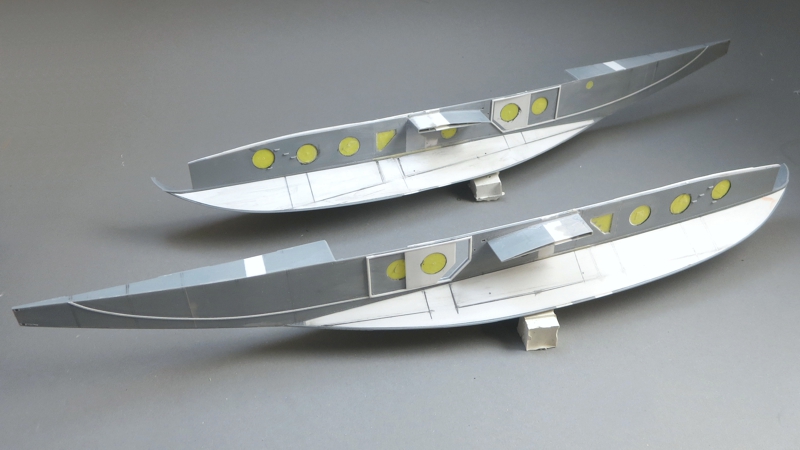 It went pretty smooth I must say, I just had to keep an eye on the different 'lines' of the hull, trying to line up everything correctly. 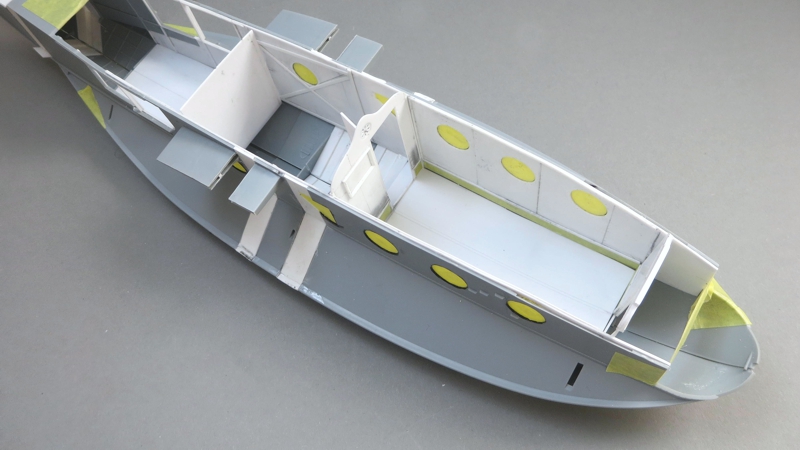 It began to resemble a 'Frankensteins monster' a bit, patchwork of main parts... Dryfitting the bulkheads... 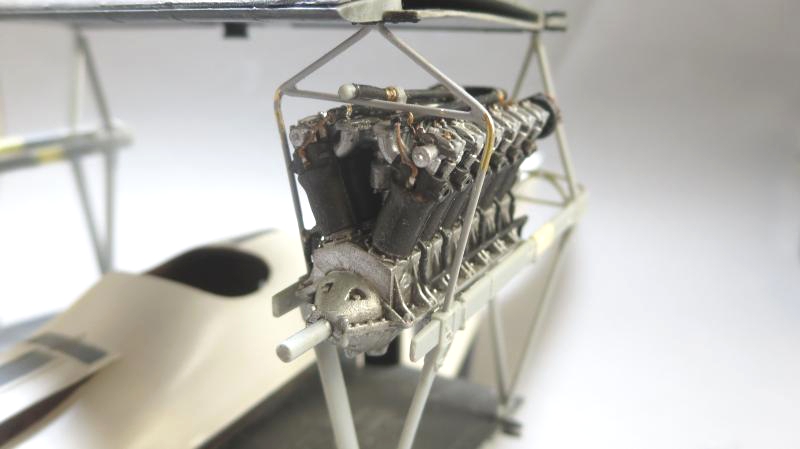 Another milestone was getting the engine mounts and the scratched struts to fit together with the upper wing. 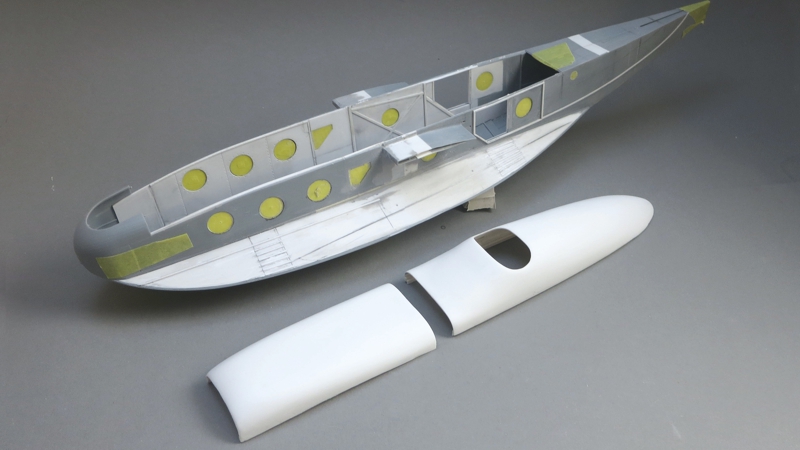 For the roof, I had to create a new piece by carving the shape from balsa, then vacuforming the two roof parts. I made them removeable to show off the interior. 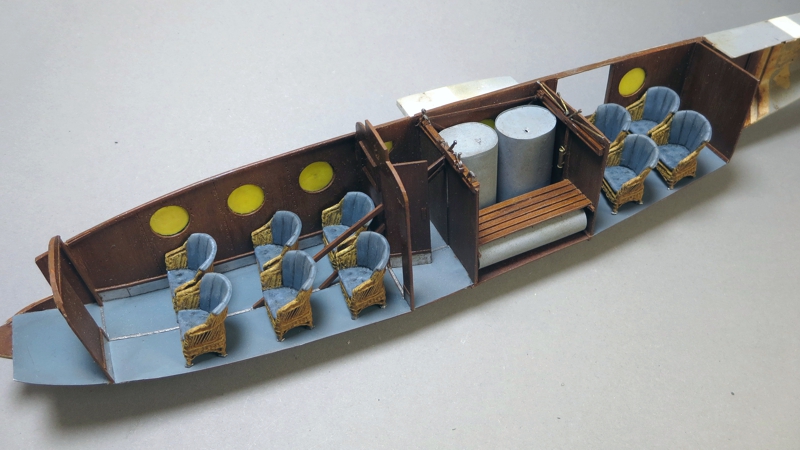 The wicker chairs were also scratchbuilt, along with struts, fuel tanks, and several other parts from which I cast copies. 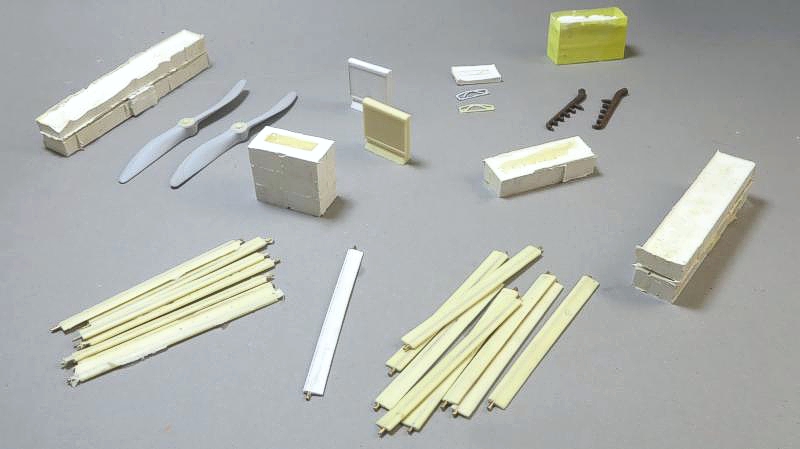 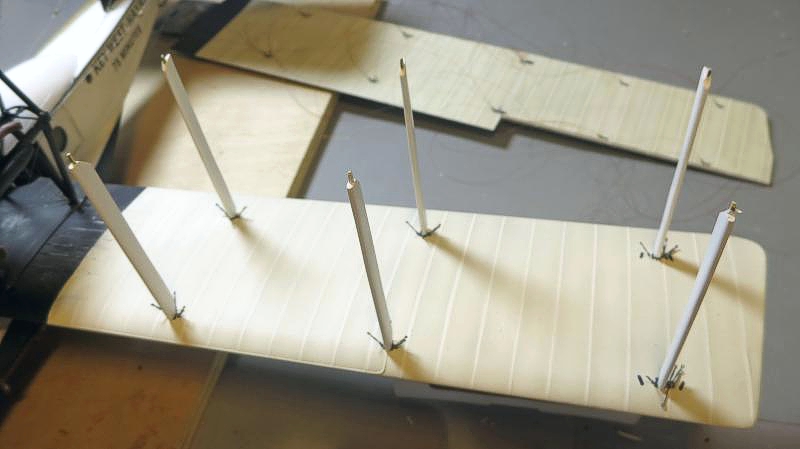 I have tried almost every kind of 'easy' rigging thread there is, EZ-ine, Uschi, Modelkasten, Infinity. 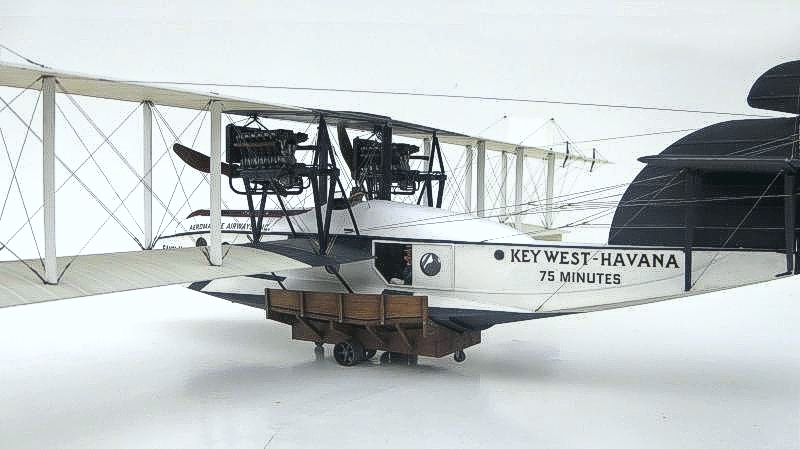 I seem to have difficulties using these products, as they are very difficult to thread through the small brass tubing. So I returned to using monofilament (what I used on the S.e.5a builds). I found the recipe of late Des Delatorre and ordered some of the fishing line he used.

"For years I have been using Maxima Chameleon 2lbs 0.12mm monofilament for my rigging. It is a very strong line, extremely flexible, CA adheres well and it doubles through the turnbuckles quite easily, the brownish colour is very good as is but I always paint my rigging with Mr Metal Color Stainless. This is my preferred choice of fishing line for rigging in 1:32 scale." (Des)

The description by Des is quite accurate to what I experienced using Maxima monofilament, it's really the first time I've 'enjoyed' rigging (I never thought I would). So, I am forever grateful to Des for this tip. Now I do not have to fear the rigging no more! 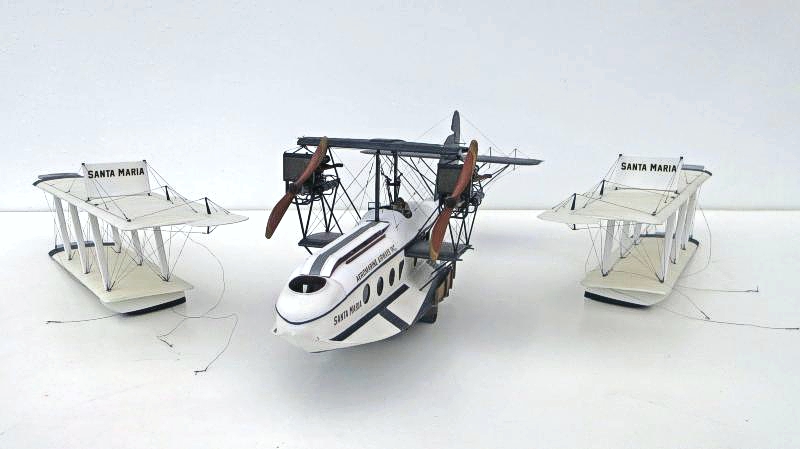 To help with storage and transport, I made the wings removeable, as suggested in WNW's F2.a instructions.

The greatest advantage of using fishing line, is the tremendous strength it adds to the wings, it really works like the real thing. 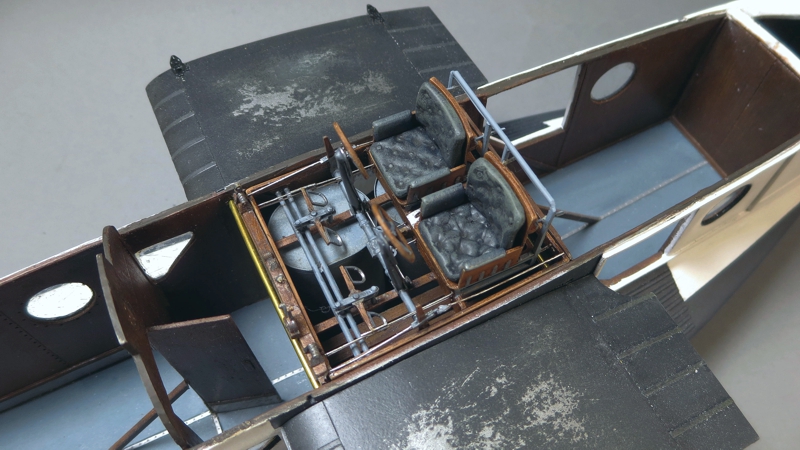 The biggest challenge in painting this beast was to do the black and white scheme without it looking too stark. Creating a slightly off-white color and using a pair of the wife's pantyhose to create a texture to the wings helped. I also lightly weathered the white and black to give it more interest. 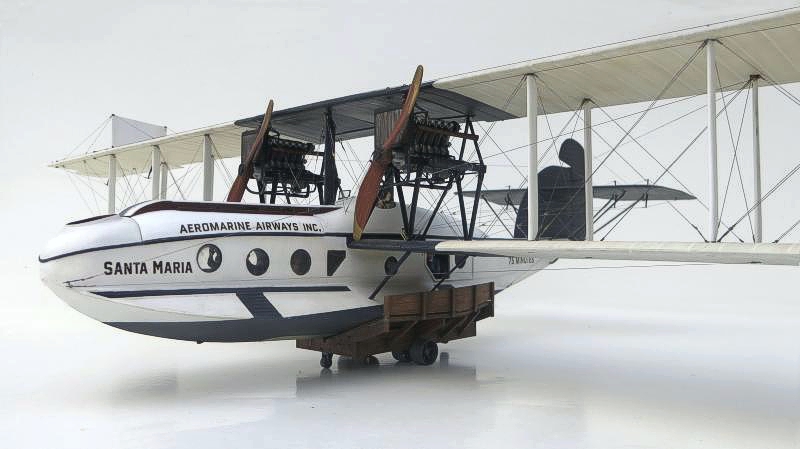 The markings were of course custom made using period photos as reference and trying to match the fonts as close as possible.

This was my toughest project so far, but my most satisfying one. 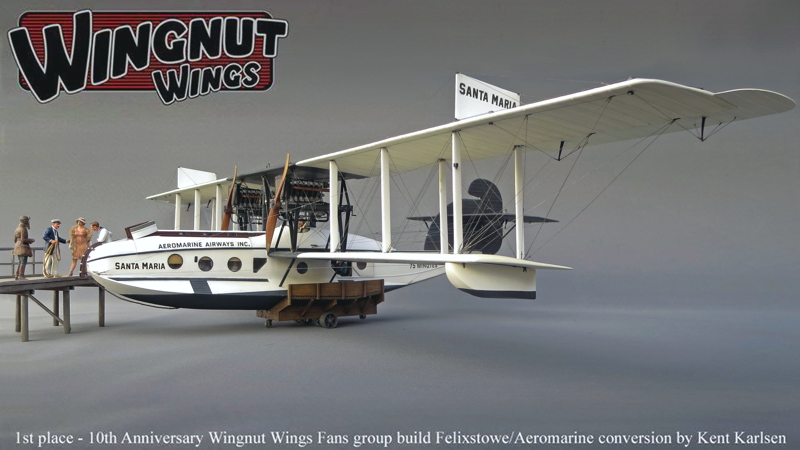 I am very thankful to Wingnut Wings for picking my 'Aeromarine' entry for first place for their ten year anniversary competition, I was surprised as there were so many wonderful builds participating.

For a more detailed look, see my thread in the Multi-Engine Group Build forum.

You can also find my article on this model in Meng AIR Modeller, Issue 94, which is also available as a PDF article. 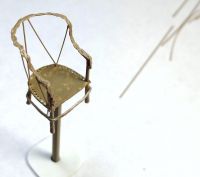 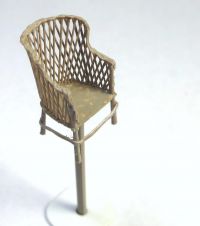