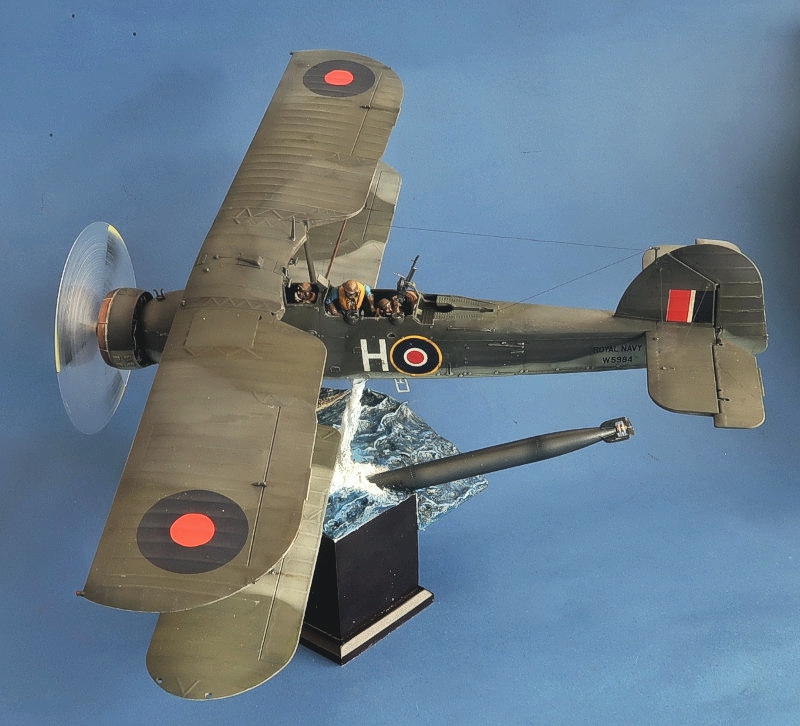 The Bismarck was, at the time of its production, the most powerful warship ever made. In a sortie into the Atlantic aimed at crippling Britain’s crucial supply lines, the Bismarck battled and sank the British battle cruiser HMS Hood on May 24th,1941. Realizing the Bismarck had to be stopped, Britain launched a pursuit, but the Bismarck managed to evade her pursuers. The only ship close enough to have a chance of disabling the giant was HMS Ark Royal which had a few Fairey Swordfish Mk 1s, affectionately nicknamed ‘Stringbags,’ equipped with torpedoes aboard. The Stringbags took off an hour before sunset on May 26, 1941 to take on the German behemoth. As the Stringbags, each carrying a single torpedo, approached the Bismarck they dived low, hoping to evade the flak that filled the air from the ship’s anti-aircraft guns. Lieutenant Commander John Moffat, with his observer, Flight Lieutenant JD Miller, only had one chance to do this. Against all odds it hit home, striking the mighty battleship in a small area of vulnerability: the rudder, which the torpedo succeeded in jamming mid-turn. With her rudder jammed to port, and thus unable to move in anything but endless circles, the Bismarck became a sitting duck. British naval ships later surrounded the Bismarck and eventually sank her after extensive bombardment on May 27, 1941. 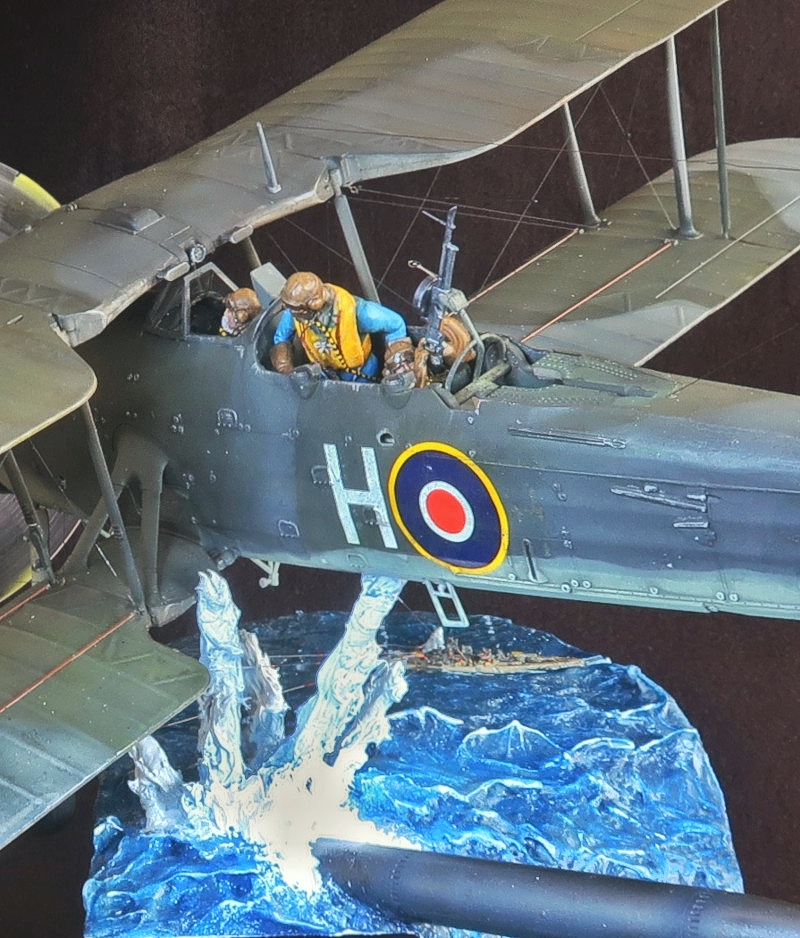 Dioramas of this nature need to be dramatic to be eye-catching. I decided on forced perspectives and action to make the flights, fires and fights believable. I had used sound in the past but that typically is not very effective. Just watch a period documentary and decide for yourself. The main focus, the Fairey Swordfish Mk 1, would be just pulling away as the torpedo hit the water and the splash would support the plane. At this scale, the Bismarck would have to be tiny. There would be flak from the ship and figures to portray the urgency of the encounter. 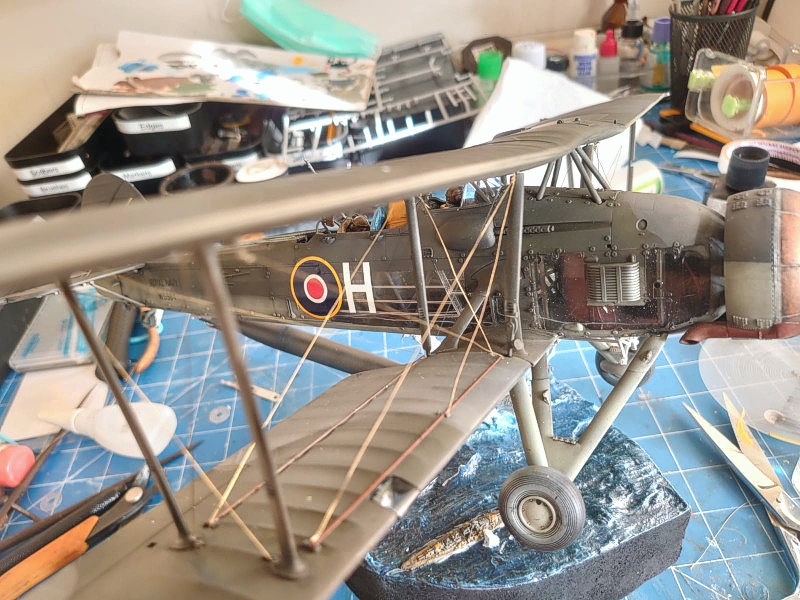 The markings for Lieutenant Commander Eugene Esmonde were provided in the kit and was used given that he led a sortie against the Bismarck. The kit was an easy build. All told it took less than a week to build it. There were a few problems pertaining to fit and accuracy. Firstly, and unusually, I elected to use a transparent half of the fuselage. The clear plastic is brittle and does not take glue well. It was a little bit misaligned. I had to heat form the styrene side to match up the edges which resulted in a lot of filling and sanding. Possibly using both clear halves and painting one might have worked better. The photoetch fret is just plain hokey and I used only a few elements – gunsights and belt braces. The rigging, which were the main component, was discarded. The seat belt is especially strange. I used fine wire at first but that did not turn out well. I then used monofilament thread which was a little thin but after paint looks the part. This entails creating a tiny wire loop on the superior wing (16 in total), securing one end of the rigging on the lower wing, tensioning the thread through the loop and gluing in place. I find this method very reliable in getting the right tension. I did not choose the tube over wire method because it’s not accurate. A short note about the instrument panel. I have seen some builders try to put the decals over the clear plastic panel. I chose instead to apply it behind the panel, mask off the dials and paint as per normal. It looks much better this way. 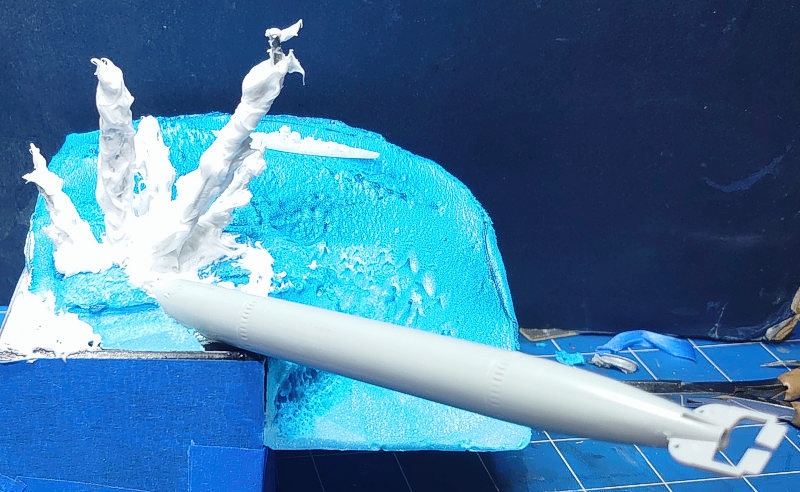 The base is a solid pre-fab base from High Planes Models. The seascape was cut from a block of expanded Styrofoam and carved out. The sea is acrylic paste modelled in such a way that the waves in the foreground are in 1/32 scale whereas those in the background are in1/4800 to suit the Bismarck in the same scale. A metal rod comes up at the point of torpedo impact with water and that is hidden in the splash made from silicone sealant. I created a thimble to house the anchor point for the metal rod in a lathe and incorporated that in the fuselage. 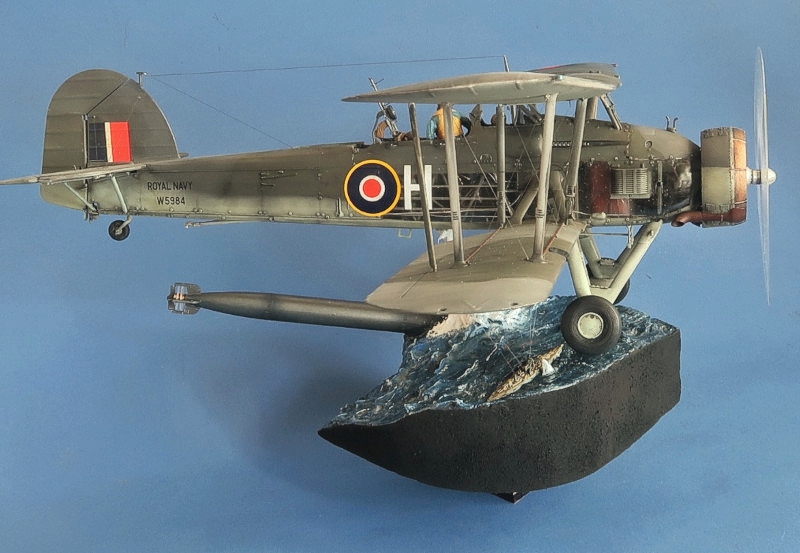 The models were base painted in Humbrol enamels, varnished with a Future and Tamiya Flat acrylic mixture. I used oil washes with turpenoids for weathering and drop filters for colour variation and chipped sparingly. The worn silver was a combination of sponge dabbing, silver pencil and undercoat with black and brush painting silver. All markings were a best-guess paint job based on the few photos available. 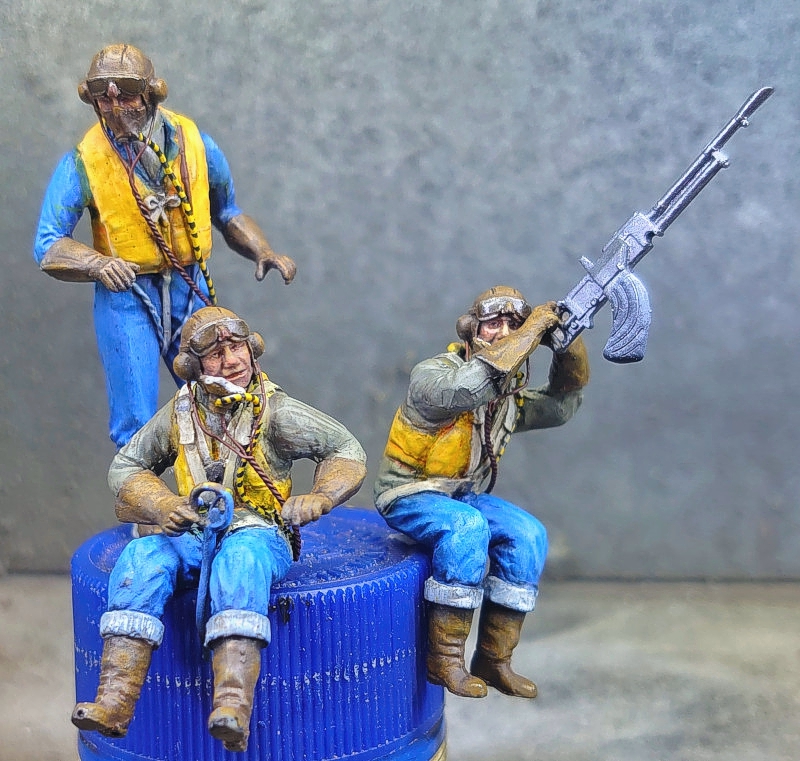 The figures are Master Box models and PJ productions modified to suit the poses. All figures were painted in Acrylic.

This diorama documents a highly improbable event in World War 2 – the crippling of the world’s mightiest warship by an outdated biplane. 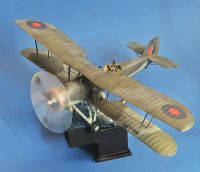 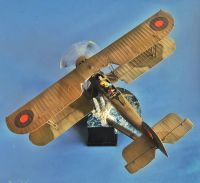 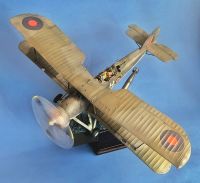 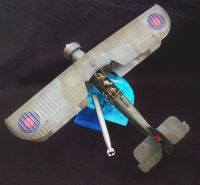 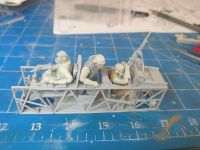 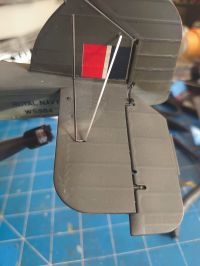