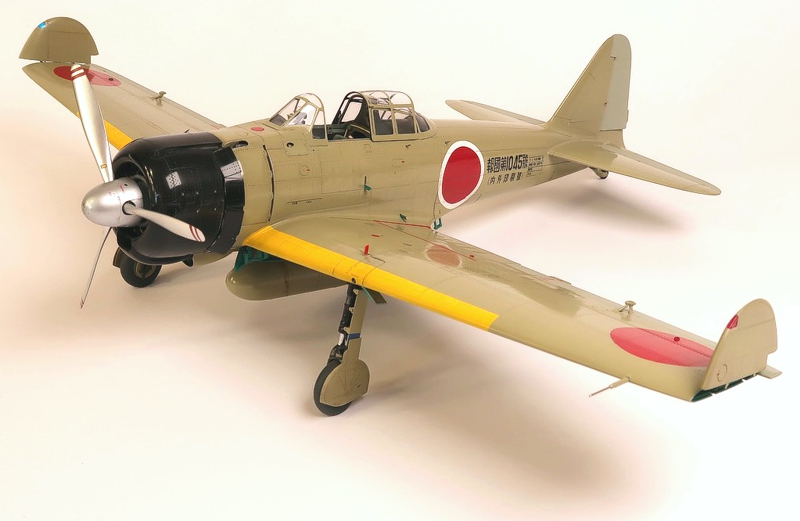 It is easy to get sidetracked when researching the A6M2. It will inevitably lead the enthusiastic reader to Canada, which it did in my case. I did not know that Mitsubishi's competitor Nakajima built Zero's, or that there were subtle (and obvious) ways of knowing the difference. One of those differences, the white surround to the Hinomaru, was one of the major features I wanted to incorporate in this build, since it highlights the dark shade of the grey with which the Zero was painted. Then I discovered the concept of the Houkoku presentation number, and that became number two on the wish list!

How does this research end up in Canada you may ask? In 1968 an enterprising Canadian from Manitoba went in search of wreckage on Ballale Island in the Western Solomon Islands, and he hit the Nakajima built Houkoku A6M2 motherload. Three of them! They were chopped up (along with a Val), and carried out of the jungle by local labour, put onto boats and by the most amazing feat of horse trading ended up on Friendship Field in Carman, Manitoba. Their story is complicated but ends up in a collection of artifacts owned by the Blayd Corporation, also from Carman. A name that kept surfacing around these aircraft and research about them is Ryan Toews - another Canadian. Ryan's tweak list for building both Tamiya Zero's is a must read for anyone attempting these kits, and he has been a veritable gold mine of information for this project. You can see his contributions in the build thread, along with all the other information about the construction and painting that I will not rehash here.

Since the tails of these aircraft were not attached to the wrecks, it is pure speculation at this stage to assign any identity other than the construction number. The aircraft is pictured soon after delivery to the island, having been assembled and test flown, awaiting the painting of unit identification.

For the glossy finish lots of polishing is the key! Three coats of well thinned Tamiya acrylic paint, buffed with 6000 micromesh, then two layers of X-22 with leveling thinner which is buffed with 6000 and 8000 grits. The trick is not to take the paint off the high spots while polishing, which I did not always get right. Look carefully at the photographs.

For more info on the build, again please visit the Work in Progress Build thread.