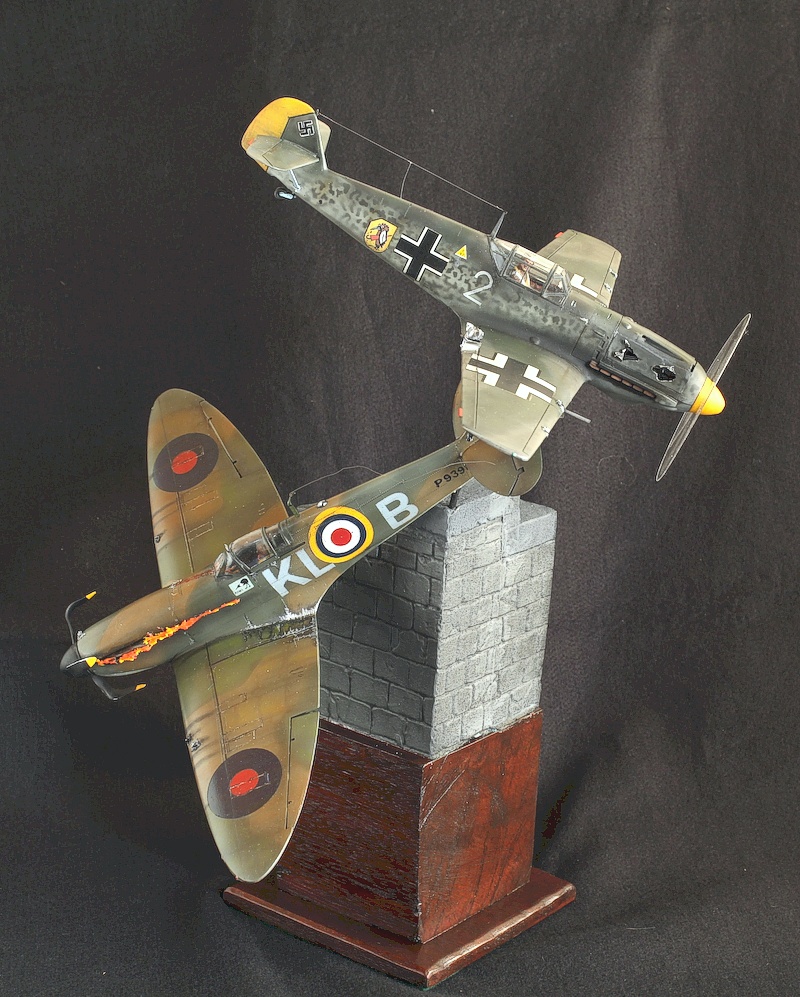 In the afternoon of 9 July 1940 while leading a patrol between Deal and Dover, a Heinkel He 59 seaplane was sighted along with an escort of several Me 109s. Ordering one section to pursue the seaplane, Deere took another section to deal with the escort. He shot down one Me 109 but then collided with a second, flown by Oberfeldwebel Johann Illner of Jagdgeschwader 51. As a result of the glancing blow with the Me 109, the propeller blades of Deere's Spitfire were bent backwards, his cockpit hood partially stove in, the engine disabled, and much of the fin and rudder lost. Already heading inland prior to the collision, he glided to a forced landing in a paddock near Manston, in Kent. The hood, damaged in the collision, proved difficult to open but he was able to escape before his burning aircraft was destroyed by flames. He spent the night at the nearby RAF airbase before returning to Hornchurch the next day. In the meantime, Illner was able to return to France in his own badly damaged aircraft. 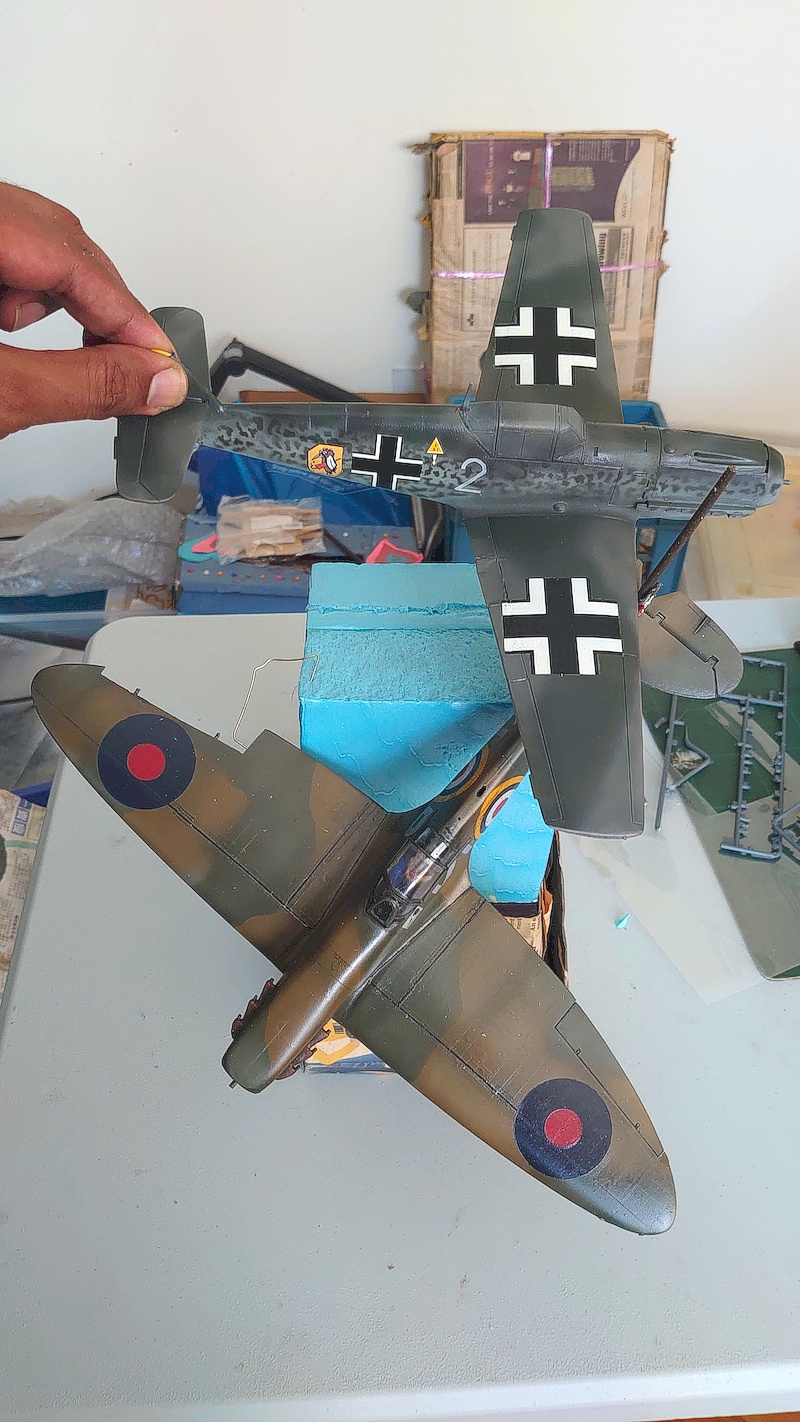 Dioramas of this nature need to be dramatic to be eye-catching. Two planes of roughly the same size pose little chance to capitalize on dramatic movement because any way you position a plane in mid-air isn’t usually dramatic. The figures could be dramatically posed of course. Then there is the battle damage and finally the flames. I wanted to do a mid-air collision diorama and originally planned for a Hurricane and Me110 during the battle of Britain but as I was looking through my stash I had the old Lone Eagles issue of the 60’s Revell Spitfire Mk 1 and the Hasegawa Me109E(3/4) kit. By today’s standards these would not pass muster as stand-alone super detailed kits, so I decided to use them in the diorama. Amazingly the box art on the Spitfire actually depicts the crash between Deere and Illner even if the Me109 is inaccurately depicted for that engagement. 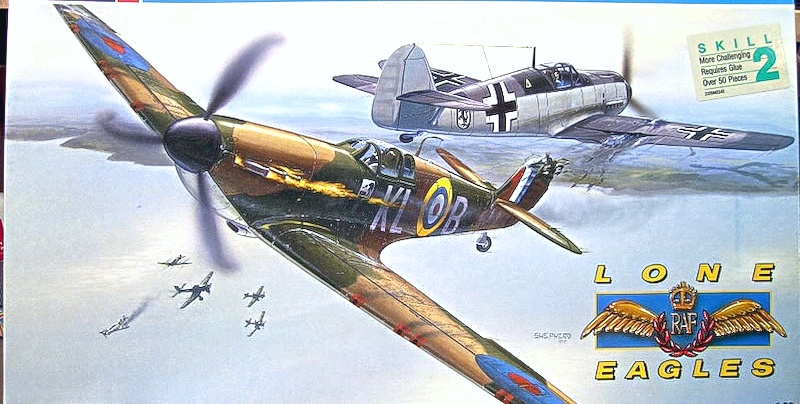 The base is a solid pre-fab base from High Planes Models. I wanted to be able to show the planes suspended without an obvious support and decided on a heavy piano wire rod through the Spitfire and supporting the Me109 on a removable tip (to allow transport). I hid the piano wire in the structure of the base. This could have been a section of the white Dover hills which would have been dull or near a structure. I elected for a section of a tower of Dover castle. This was cut from a block of expanded Styrofoam and carved out. It was painted in acrylics. 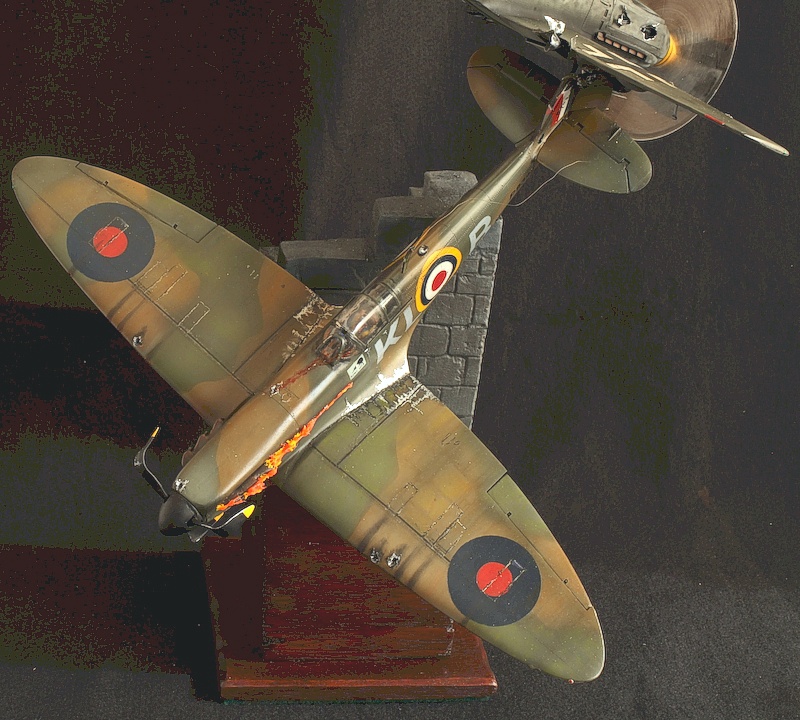 The old-tool Revell Mk 1 is a very well detailed kit externally. The cockpit was super detailed with the Waldron Spitfire upgrade set. The throttle quadrant is movable when done. Unfortunately, very little is seen with the pilot installed. The canopy, while accurate, was too thick and I vacuum formed a new one. The pilot is a kit figure extensively reworked to fit the cockpit. The rest of the model went together easily enough. The markings were hand painted as the old decals could not be salvaged except for the Kiwi symbol. 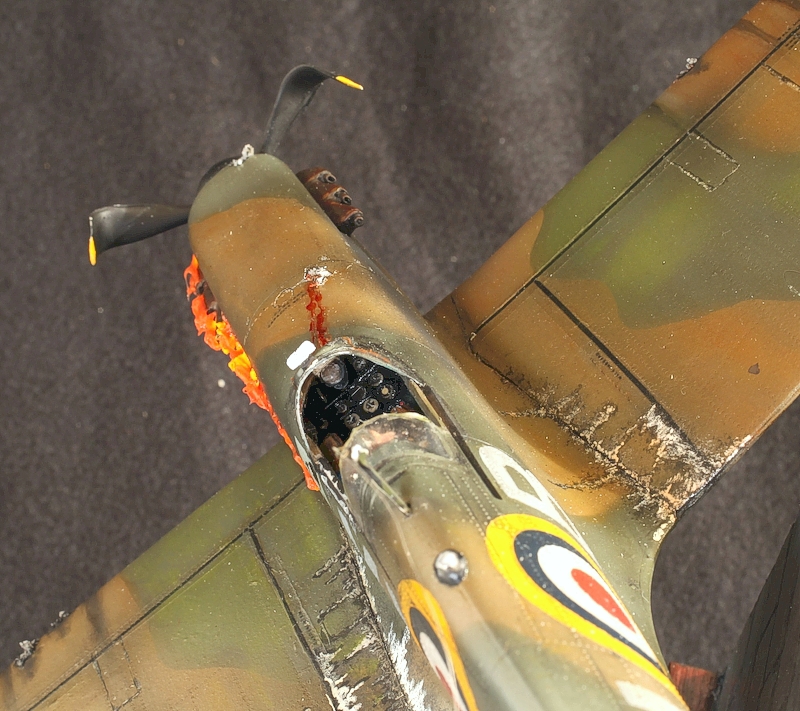 Battle damage was carefully replicated. Multiple bullet holes on the nose – one of which went through the hood and caused a fuel line rupture that leaked fuel on the windshield obscuring visibility.

Cannon hits on the wing were replicated with drilled holes, epoxy putty and pastels for the char of cannon fire. The canopy was ground with a motor tool as was the tail and rudder. The antenna mast and propeller blade were heat bent. The flames are silicone sealant tinted with acrylic paints. The leaking engine oil is acrylic gel tinted with acrylic paint. 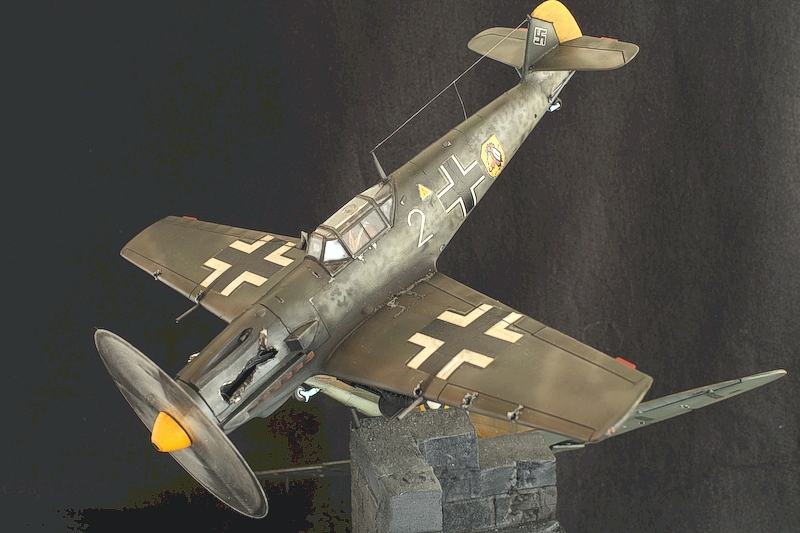 Illner flew an E3 for this mission. These had oversized crosses on the upper surface. The Camouflage pattern was freehand applied. I had some Me 109 mottle masks and wanted to try them out, but I don’t think this was accurate for this model. The Verlinden upgrade set was used on the kit. While undoubtedly beautiful a lot of the detail is wasted on the model as it can’t be seen with the pilot figure installed. In retrospect, I would use the kit parts except for the canopy photoetch, instrument panel and undercarriage. The figure was the kit pilot sculpted to size. Due to the Covid lockdown I could not get a commercial aftermarket pilot in time. The JG 51 symbol and number two unit marking was handmade. 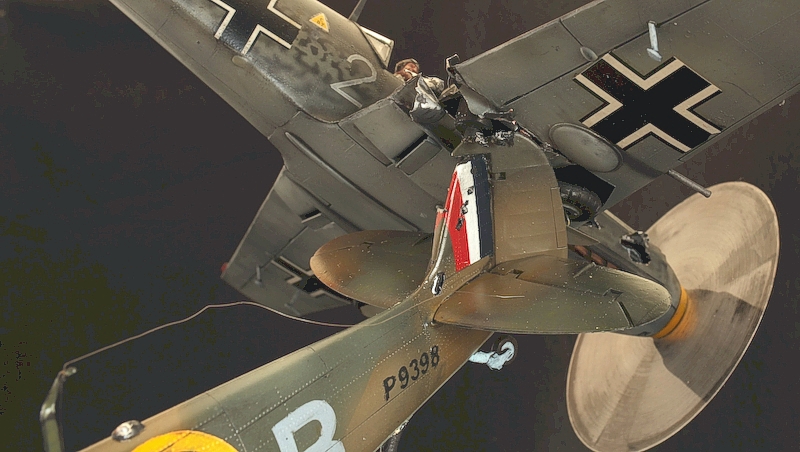 Battle damage was achieved by removing entire panels and replacing them with foil. The whole model was then painted, and the foil parts cut and ripped. The effect was very satisfying. The spinning propeller was a painted clear disc abraded in a motor-tool. The spinner was replicated in aluminium on a lathe using a chaser and follower pair on a lathe. Basically, this is a chaser stylus that guides the cutting follower based on the contours of the part. Again, bullet holes were simulated with drill holes and putty. 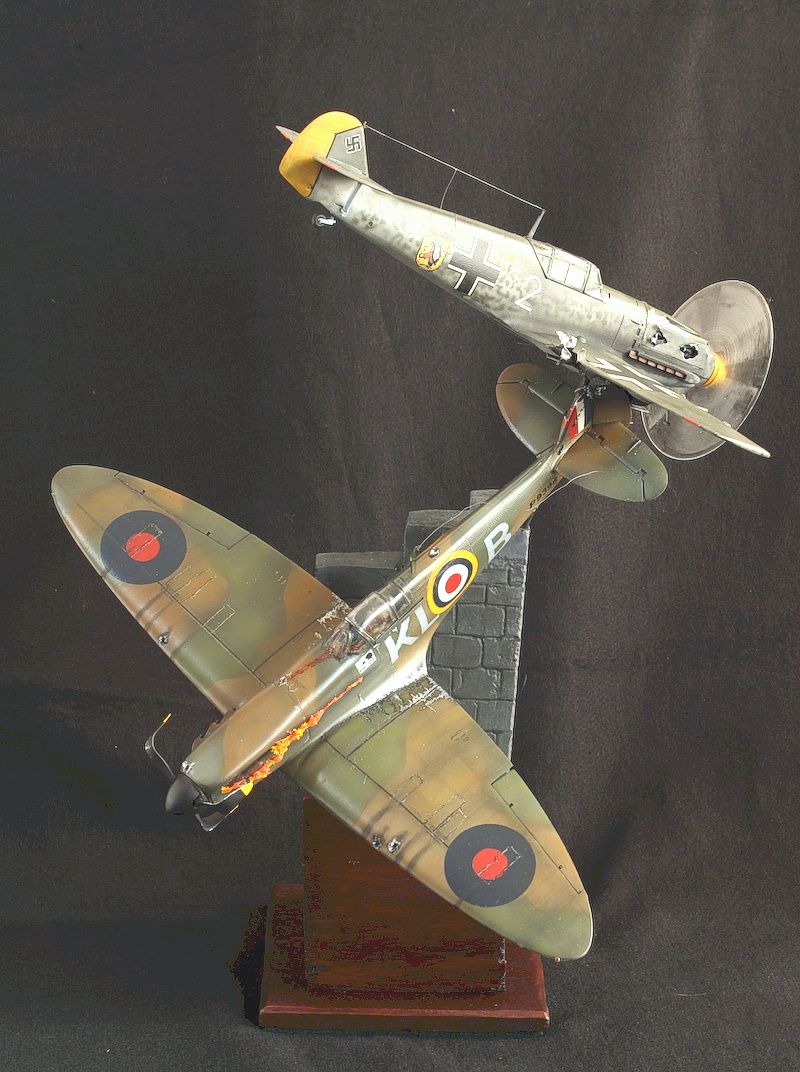 The two aircraft were mounted on the piano wire with the Spitfire permanently epoxied in place and the Me109 balancing on an aluminium trunnion mount turned in a lathe.

The models were base painted in Humbrol enamels, varnished with Future-Tamiya Flat acrylic, weathered with oils thinned with turpenoids and chipped sparingly. I used oil washes for weathering and drop filters for colour variation. The worn silver was a combination of sponge dabbing, silver pencil and undercoat with black and brush painting silver. All markings were hand painted to portray the Spitfire Mk 1 of Number 54 Squadron at Yorkshire and the 109E-3 of Jagdgeschwader 51 in France. The 109 was a best-guess paintjob based on the few photos available. I used RLM colours from Humbrol which look very authentic with the right sheen. Markings were a combination of hand-painted markings, home prints and old decals from the spares box. The decals from the kit were not usable.

This was a nicely documented historical build. It is nice to have a diorama of the two most classic of the dogfighters of WW2. 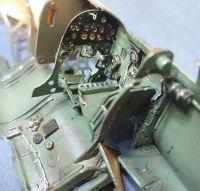 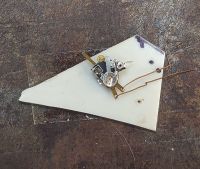 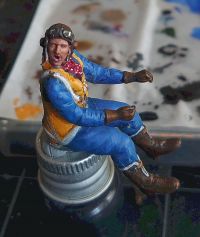 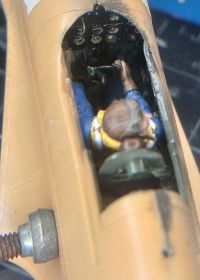 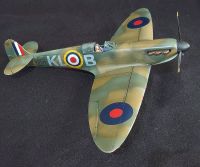 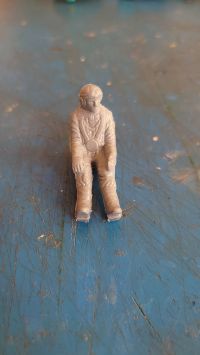 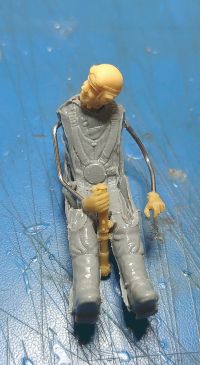 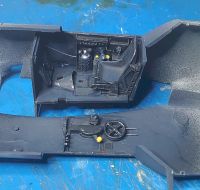 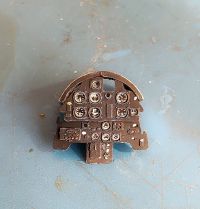 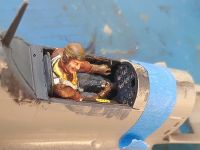 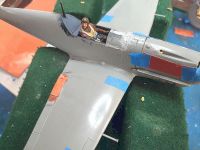 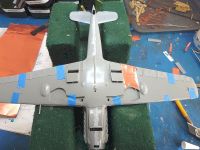 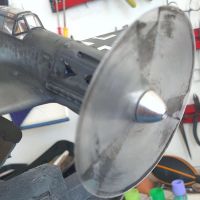 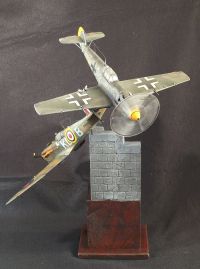 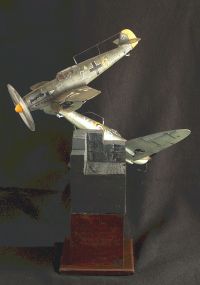 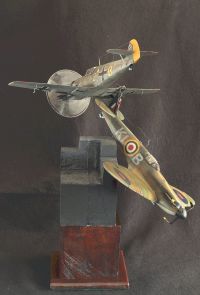 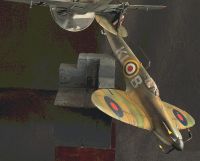