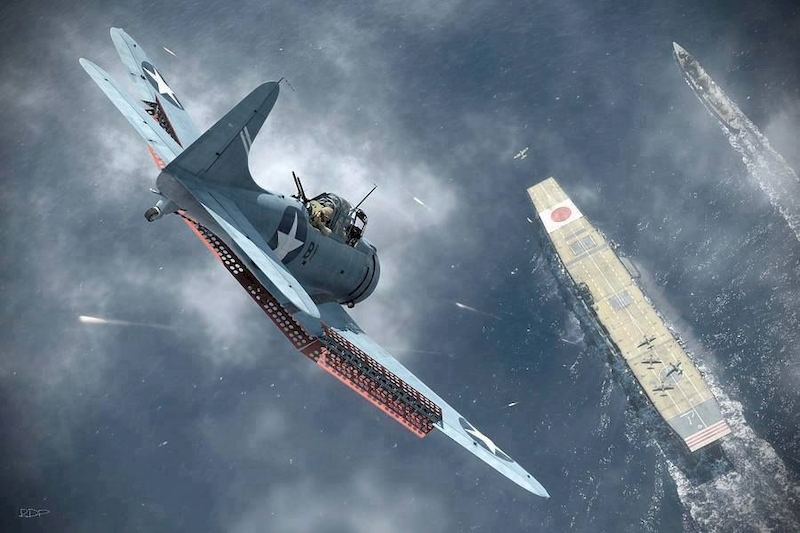 The Battle of Midway was a decisive naval battle in the Pacific Theater of World War II that took place on 4–7 June 1942, six months after Japan’s attack on Pearl Harbor and one month after the Battle of the Coral Sea. The United States Navy under Admirals Chester W. Nimitz, Frank J. Fletcher, and Raymond A. Spruance defeated an attacking fleet of the Imperial Japanese Navy under Admirals Isoroku Yamamoto, Chūichi Nagumo, and Nobutake Kondō near Midway Atoll, inflicting devastating damage on the Japanese fleet that proved irreparable. Four Japanese and three American aircraft carriers participated in the battle. The four Japanese fleet carriers—Akagi, Kaga, Sōryū and Hiryū, part of the six-carrier force that had attacked Pearl Harbor six months earlier—were sunk, as was the heavy cruiser Mikuma. The U.S. lost the carrier Yorktown and the destroyer Hammann.

After contact reports from Midway-based PBY Catalina patrol aircraft on the morning of June 4, 1942, Enterprise started to launch her air group starting at 07:06. However, the squadrons became separated and reached the Japanese independently. Only the torpedo bombers stayed together and reached the Japanese by 09:55. There is a legend of how Richard Best and his squadron made a calculated guess as to where the carriers would be. I think this does not give credit to the capabilities of this incredible team of pilots and their gunners.

At about 10:22 the Enterprise dive bombers started to attack two Japanese carriers, Kaga and Akagi. At this point, the attack became confused, as all 31 Dauntlesses started to attack Kaga, and none Akagi. Lieutenant Best noticed the error and broke off with his two wingmen to attack Akagi. Best's three SBDs attacked Akagi. The first bomb, dropped by Lieutenant Edwin John Kroeger, missed. The second bomb, aimed by Ensign Frederick Thomas Weber, landed in the water, near the stern. The force wave of that hit jammed Akagi's rudder. Best launched his 1,000-pound bomb from his plane at 2,500 feet in the air. His bomb hit the Akagi at 10:22 a.m. Contrary to popular belief, this crippled the ship and did not sink it. The next day the Akagi was ordered scuttled by an IJN cruiser.

Wow. Who wouldn’t want a diorama of that? 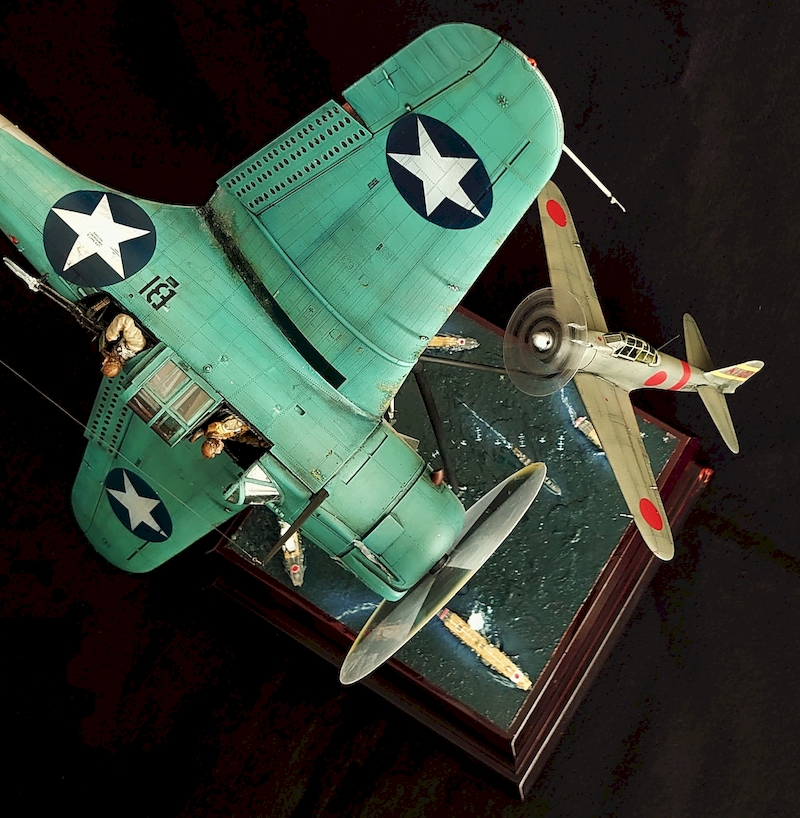 Dioramas of this nature need to be dramatic to be eye-catching. I decided on forced perspectives and action to make the flights, fires and fights believable. I’d used sound in the past but that typically isn’t very effective. Just watch a period documentary and decide for yourself. The main plane the Dauntless would be at the crest of the dive having just deployed its thousand pounder. The Zero would be rising to intercept it and the aircraft carriers would be in evasive manoeuvres. At this scale the aircraft carriers would have to be tiny. The first and second waves of aircraft, which had failed in their primary mission but succeeded in keeping the intercepting aircraft below and unable to engage the second dive bomber wave would also be included. These would be focused on the Kaga. There would be lights to enhance the carrier fires as well as the gun flashes. 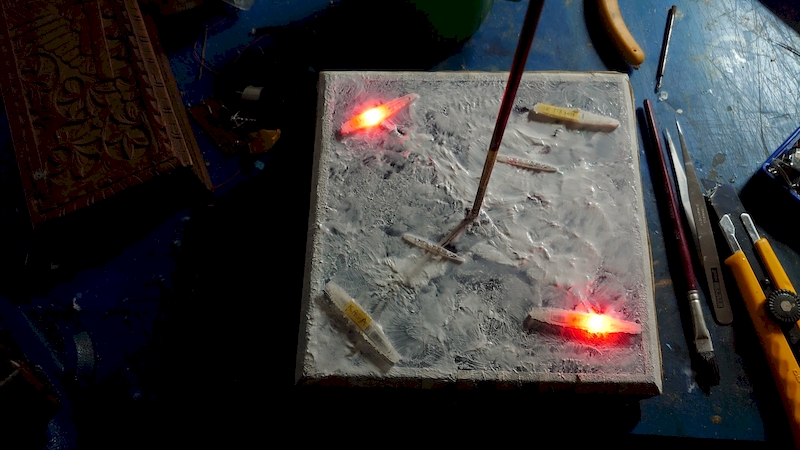 The base is a solid pre-fab base from High Planes Models. I had to cut a chamber out and run wires up the centre for the LED’s to the 4 carriers and the 2 aircraft. The setup was powered by a 9V battery with a switch to the side. The ships and miniature aircraft of 1:4800 come from Shapeways. There are in addition, early USN aircraft Dauntless, Wildcats and Avengers. I added two Kuma class light cruisers Oi and Kitakami. Of course, the aircraft carriers Akagi, Kaga, Hiryu and Soryu were placed in evasive manoeuvres. Lights come out of the base and black primer blocked off unwanted glare simulating and explosion in Kaga and gunfire on the other three. Acrylic paste coated the whole thing and the ships were painted. The aircraft were arranged to show the the first wave with a torpedo run on Hiryu and Soryu, the explosion of Kaga and the missed stern explosion of Akagi. These effects were silicone sealant which would also disperse the lights. The aircraft wires come up a brass tube that was soldered in place to provide attachment for the Dauntless and Zero. The 1/72 Zero is from Tamiya. A delightful little quick build but just not my kind of thing. It was finished in the colours of Saburo Shindo who was based off of Akagi and involved in the Pearl Harbour raid 6 months before. The wires come up the auxiliary fuel port and onto fibre optic cables that go to the machine guns which have silicone blast flashes. 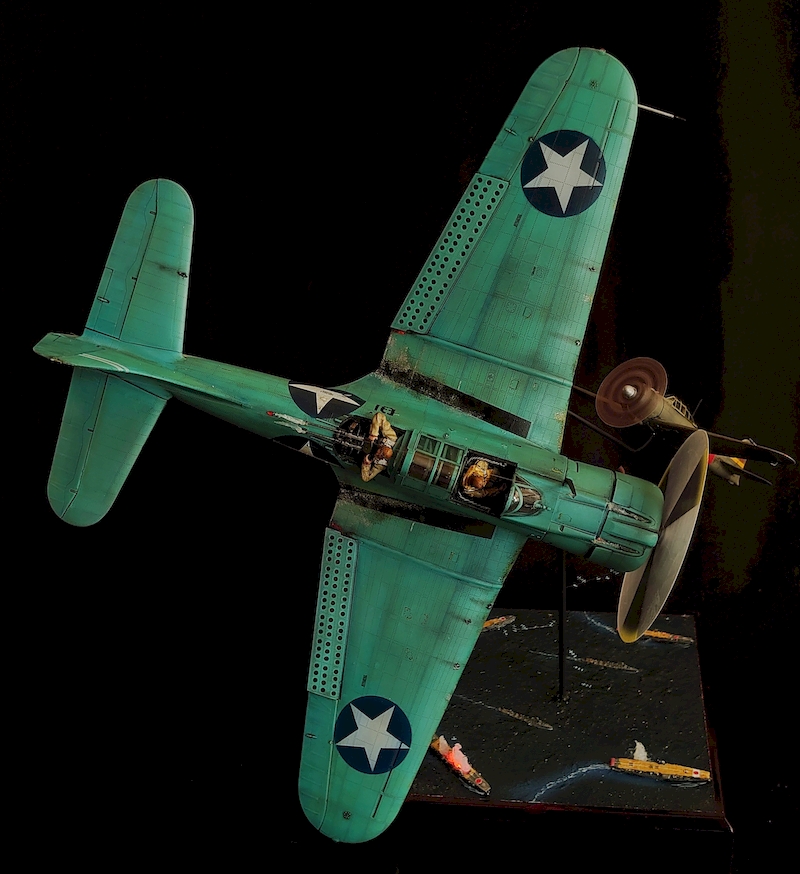 Unfortunately, I only could get the Trumpeter SBD-5. The main kit is the same and you get the conversion cowling in a separate box along with other bits. This was converted to the earlier SBD-3 version with the dorsal air-scoop sculpted from epoxy putty and brass spinner turned in a lathe. Also, the direct telescopic gunsight was built from brass tube. The spinning prop was cut from clear styrene and sanded in a spinning motor tool and airbrushed afterward. Again, a single LED below the crew compartment with fibre-optics to the machine guns was run. The two figures are from Nemrod and extensively re-sculpted and repositioned. The pilot has a head from Verlinden. Painting was done in the usual way with pre-shade and Humbrol Enamel Middle Blue. The decals provided in the kit were just wrong as late war decals and so I used them as a template to cut new masks from vinyl masks. The B1 of Dick Best’s plane was the 18 decal retouched.

Battle damage was necessary to keep a believable portrayal, and this was achieved with drill holes and putty. Otherwise the model was weathered with washes, filters and oils. The figures were painted with acrylics. 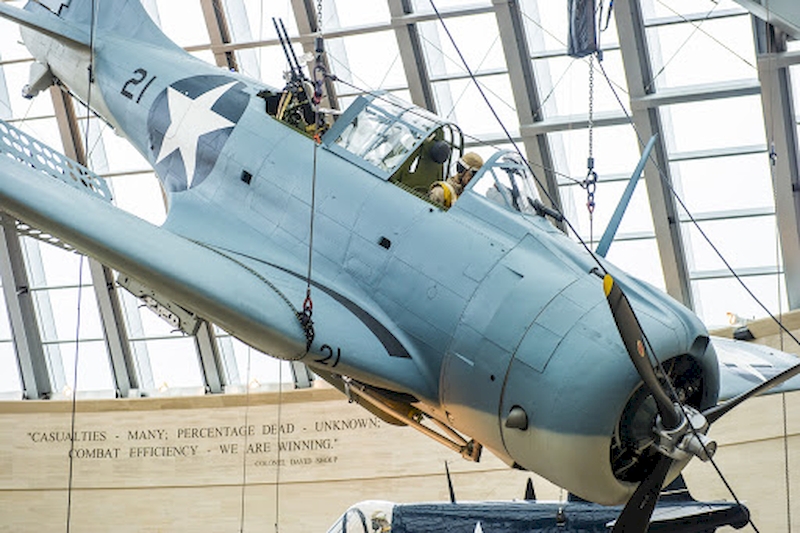 This was a really fun quick build. Combining the different extreme scales really enables it to tell a story in a very small footprint. It was great to finally put this story on my shelf. 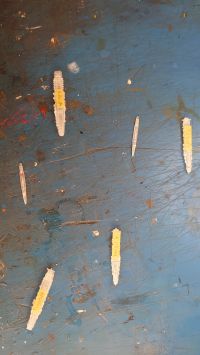 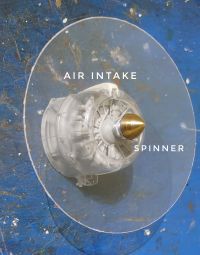 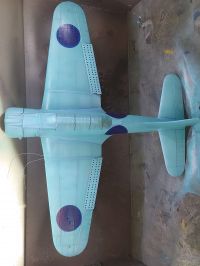 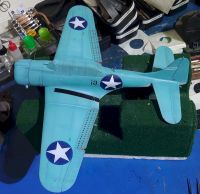 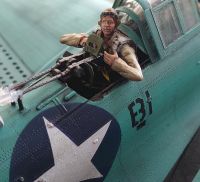 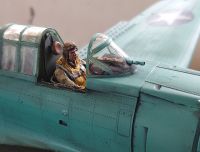 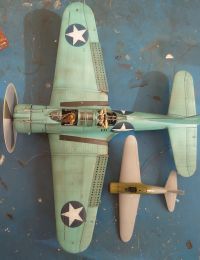 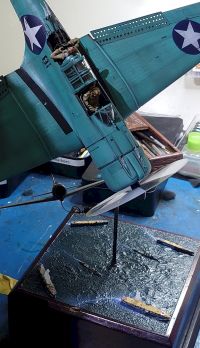 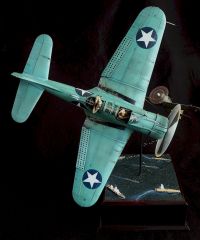 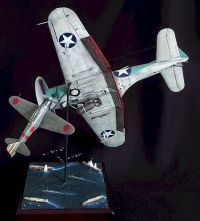 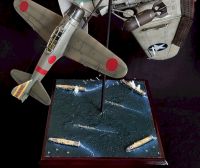 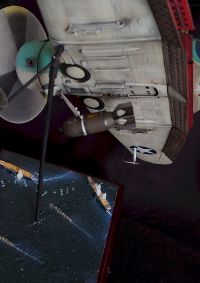 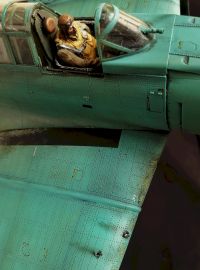 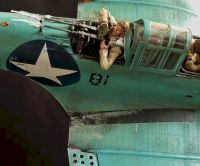 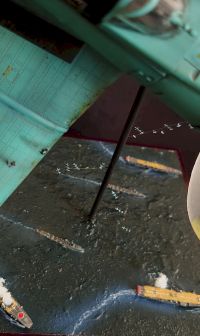