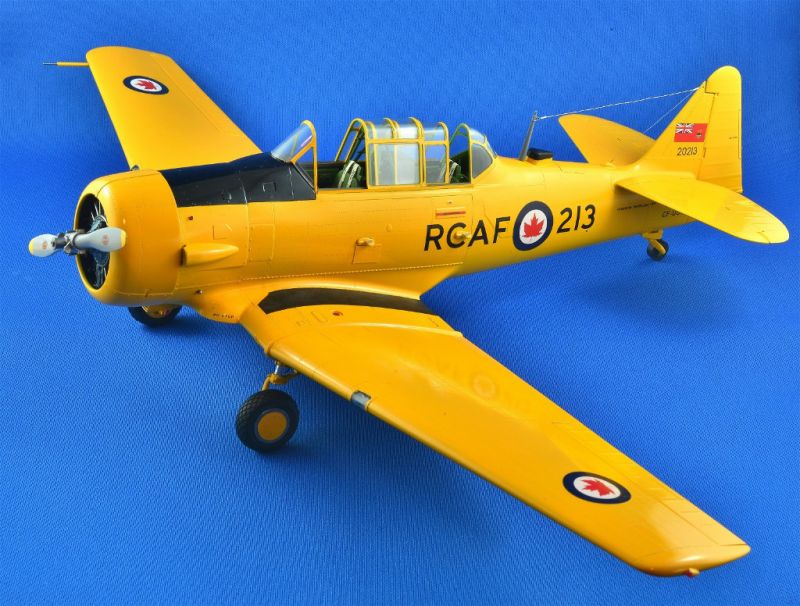 After about 4 ½ months of work, which is an a record short time for me, I’ve finished the Kitty Hawk T-6 Texan kit into a Canadian Harvard. This pandemic we find ourselves in provides plenty of motivation to model, especially when the weather is crappy outside, so I got a lot done the past 2 weeks. This Harvard Mk 4 is a museum bird that lives at the Canadian Warplane Heritage Museum near Hamilton, Ontario and as far as I know, it stills flies now and then. It was built at Canadian Car and Foundry in 1951 and served RCAF flying schools until it was purchased by a private owner in 1965 and later donated to the museum in 1972.

I have many photos of this aircraft and all of them show it to be super clean, especially those in the museum hanger. Other than dirtied up walkways and the characteristically weathered exhaust pipe, it still looks brand new today. I have always loved the look of these yellow birds and chose this aircraft since the kit decals are the only ones available in 1/32 that I know of.

And lots of scratch made enhancements.

This kit presented many, many challenges too numerous to mention, but I have a build log from start to finish in the forums for those who might be interested: Work in Progress Build Thread.