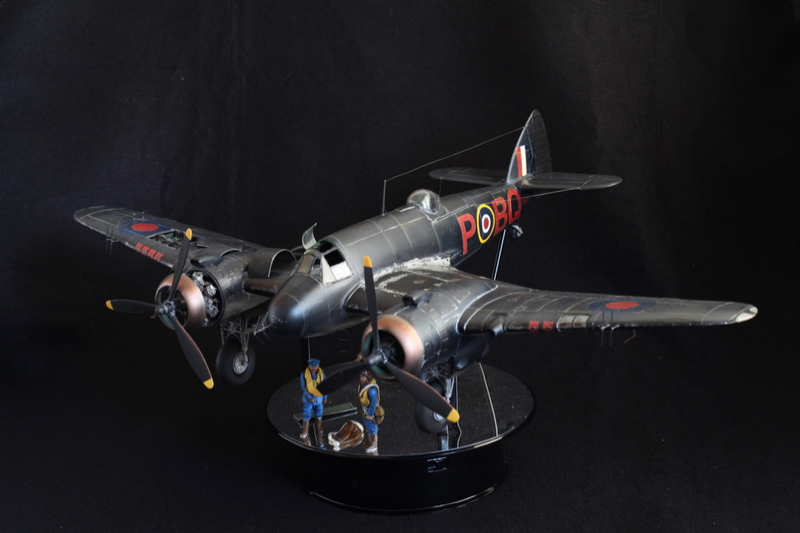 The Bristol Type 156 Beaufighter (often called the Beau) is a multi-role aircraft developed during the Second World War by the Bristol Aeroplane Company in the UK. It was originally conceived as a heavy fighter variant of the Bristol Beaufort torpedo bomber. The Beaufighter proved to be an effective night fighter, which came into service with the Royal Air Force (RAF) during the Battle of Britain, its large size allowing it to carry heavy armament and early airborne interception radar without major performance penalties. 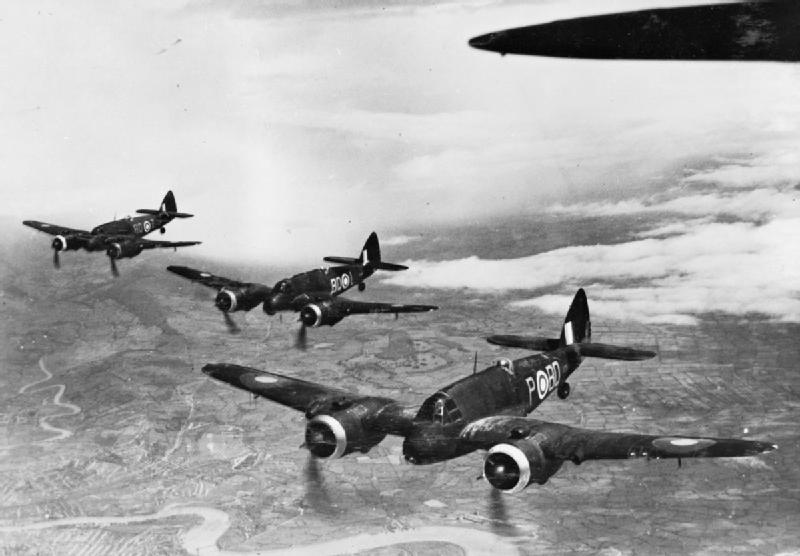 Revell produced this kit in 1974 (https://www.largescaleplanes.com/kitdb/details.php?kit=149). There were a few reboxings by Lodela. The kit is as one would expect, outdated by present standards. The cockpit is crude and the observers bay inaccurate. The pilot canopy is the early type (which is appropriate for the version I want to build) and the observer's canopy is too high with an inaccurate profile. Raised panel lines are reasonably laid out but various details do not line up. These all had to be rescribed according to the plans from Modeller’s Datafile. The engines are reasonable if closed but there are no engine bay details. They do require the exhaust manifold to be added but the crankshaft housing is passable. The main parts used were the fuselage, wings and stabilizers. Everything else was scratchbuilt or aftermarket.

The kit provided undercarriage is reasonably accurate. Nevertheless a kit of this size with its embellishments is heavy and I opted for the Scale Aircraft Conversions #32091 Bristol Beaufighter Landing Gear (Revell). This comes with a rear wheel undercarriage strut. White metal doesn’t always work well under weight but for these sorts of closed undercarriage they are quite good. The undercarriage doors needed some interior detailing and wiring and hoses in the rear for the fuel dump. The wheels were from the kit with a bit of filling in to make solid discs. Weighted effect was done with a hot gun. Brake lines were solder wire. 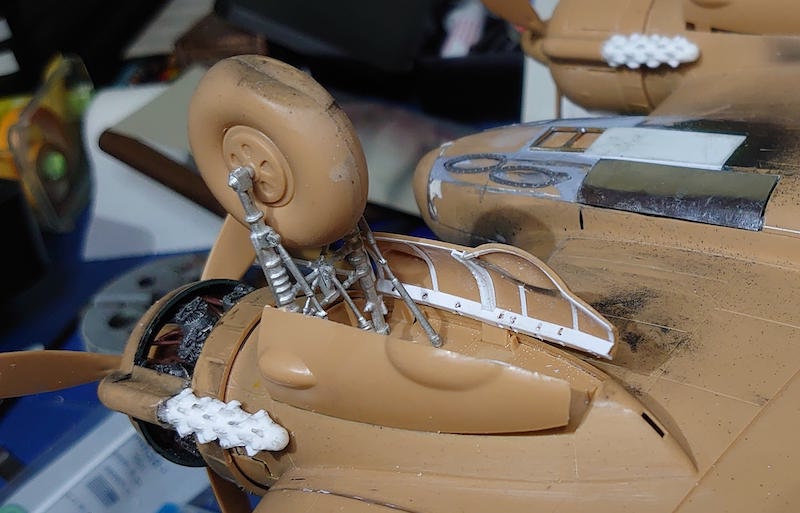 The cockpit parts were mastered following plans from the aviator’s manual. Model Monkey makes an excellent 3D printed resin cockpit set that more than suffices for the cockpit details. This was detailed with Waldron dials and placards. Seat belts were lead foil. Brass rod and fine solder wire was used to model levers and springs. The set gives details just rear of the pilot entry door which is adequate if you don’t open up the observers bay. Wall details and the rear bay still need to be made. The forward canopy was remastered using the kit provided canopy to create a plaster mold which was vacformed over. I opted for the early type canopy with drop down direct vision slots. The escape hatch and pilot's hatch are functional to allow for better visualisation of the internal details. The Observers canopy is too high. I made a new one from the kit provided canopy by casting a plaster mold which was pared down to the right dimensions and vac-formed new canopies. Note that the entire base opens in the real thing and not just the transparent area. The observer’s seat is the old type bucket seat vacuum formed on a balsa wood master and mounted on aluminium struts soldered in place. 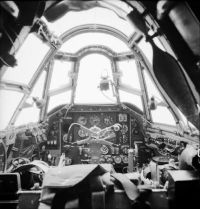 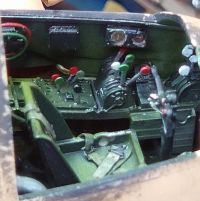 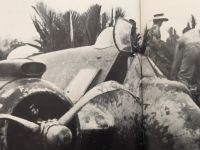 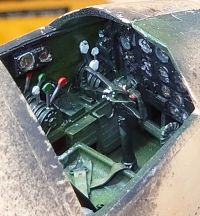 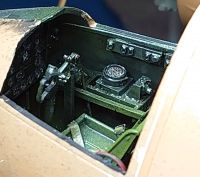 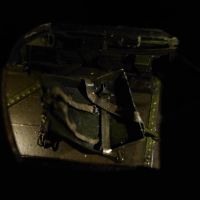 All wall details and floorings were scratchbuilt. I provided for LED lights within the kit as it would be difficult to see the details otherwise. The Type 1F Hispano cannons were drum fed and these were made on a lathe in aluminium. Various details on the fuselage walls were reproduced from Modelers Datafile. The two details include the two ‘toilets’ that were provided to crew on long flights. The cannon travel locks were made from brass. 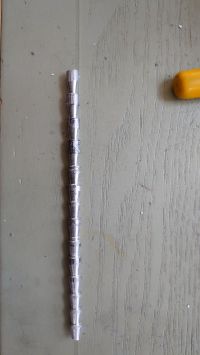 I wanted to show the model with one working engine and one detailed engine. The starboard engine was the Vector 1/32 Resin Bristol Hercules Engine #32-007 for aircraft kit. It is all resin but designed as a generic detail for any Hercules-engined aircraft. I made the engine mounts from drawings and photographs out of brass as it needed to be fairly sturdy to hold up the engine and be accurate in this scale. I also turned a fire-extinguisher out of aluminium and detailed a fire-extinguishing system using solder wire. The exhaust manifold and ignition harness was solder wire and the final exhaust collector was aluminium rod. The porcupine exhaust was scratchbuilt. Quick boost does make 2 porcupine exhausts but type I doesn’t look right and type 2 does not have the right number of vanes (quills). So I made a master out of aluminium rod turned on a lathe with copper vanes cut and folded in place (they were 2 millimeters high each in 4/3 configuration in 4 sets - that’s 28 vanes!). This was cast in resin and the results were quite satisfying. Since then HPM Hobbies have produced a more accurate exhaust which I’d strongly recommend. I vacuum formed new engine covers from the old ones which were too thick. 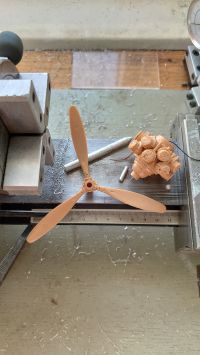 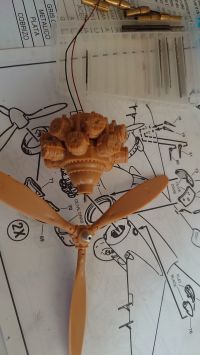 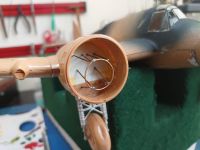 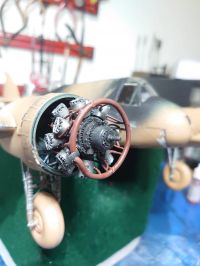 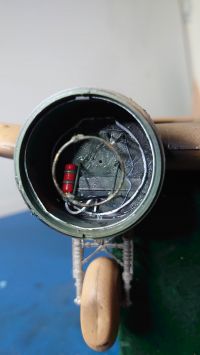 The portside engine was from the kit detailed with a solder wire exhaust manifold as before. In addition a micromotor was housed in the engine. A centraliser turned on a lathe ensured the axle rotation would remain concentric. From the front the propeller should turn clockwise and the motor was wired accordingly.

Both gun bays are covered by steel sheet doors scratchbuilt and held in place by magnets. The wing guns were scratchbuilt from brass rod, styrene stock sheet and lead foil. The fuselage Hispano guns are from brass tubes. 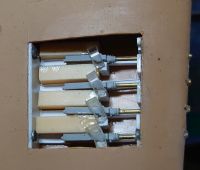 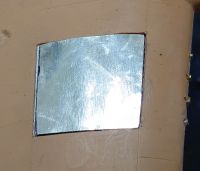 The model was base painted in Humbrol enamels, varnished with Future-Tamiya Flat acrylic, weathered with turpenoids and chipped sparingly. I used oil washes for weathering and drop filters for color variation. Light grey was used as panel wash. The worn silver were a combination of sponge dabbing, silver pencil and undercoat and masking of silver with black overspray. All markings were hand painted to portray the aircraft of 600SQN in May 23, 1941. BQ-Z in the picture in T4628 so I guessed T4617 for BQ-P. There is a lot of discussion online about the color of the exhaust collector shroud in the front of the nacelles. It’s clear that it is not made from copper. Like the Gloster Gladiator and Fairey Swordfish these manifolds heat up and discolor as in the figure. They aren’t copper at all. I did this in various shades of Alclad with a final matt coat. 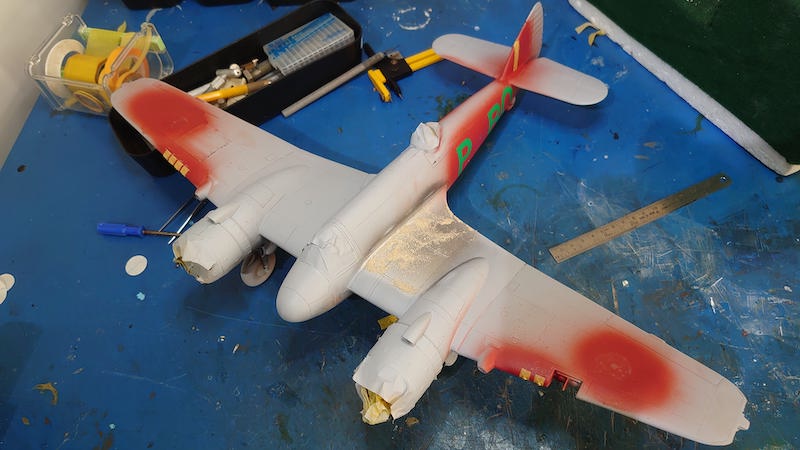 This is a fairly prominent of any nightfighter. On model kits they break all the time. I made the entire aerial array out of soldered brass that was removable for transport. 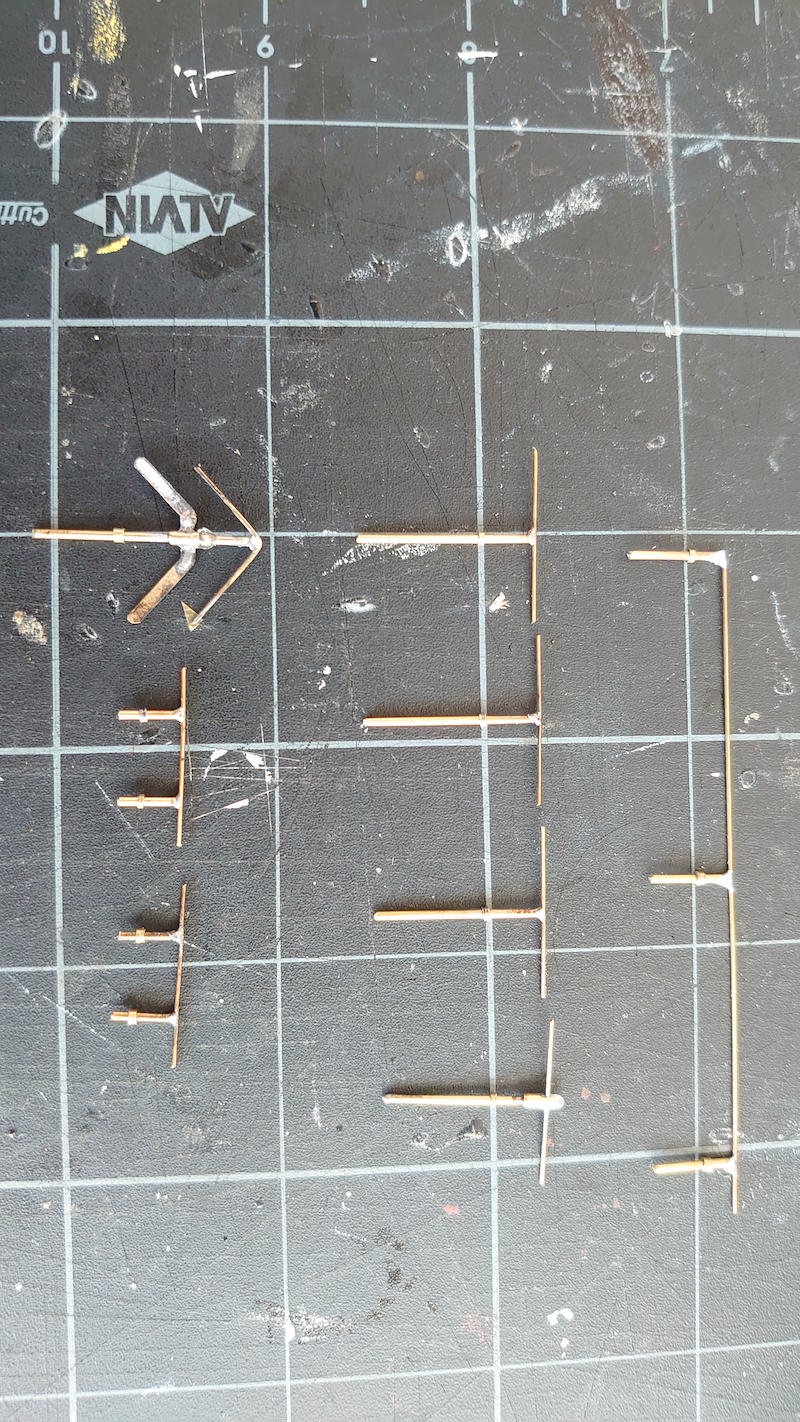 These are really old and come from re-heat models. They have no chin and had to be resculpted. They are painted in acrylics. 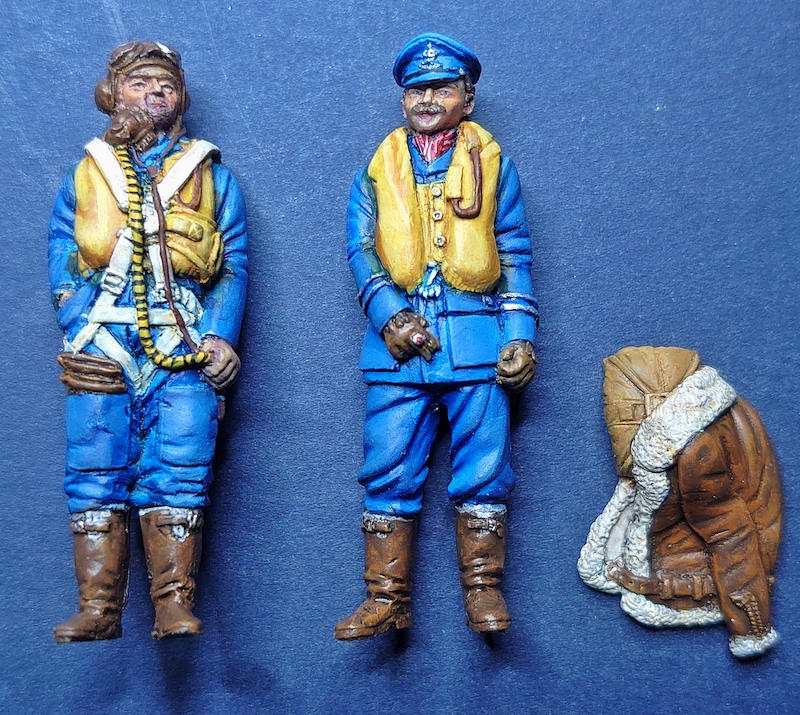 I continue to build these old Revell kits from the seventies. At the time of writing there appears to be no likely contender for the Beaufighter in this scale. A black nightfighter is deceptively easy to paint without putting in the necessary weathering to make it interesting. It builds into a really impressive model and one I am happy to add to my collection. 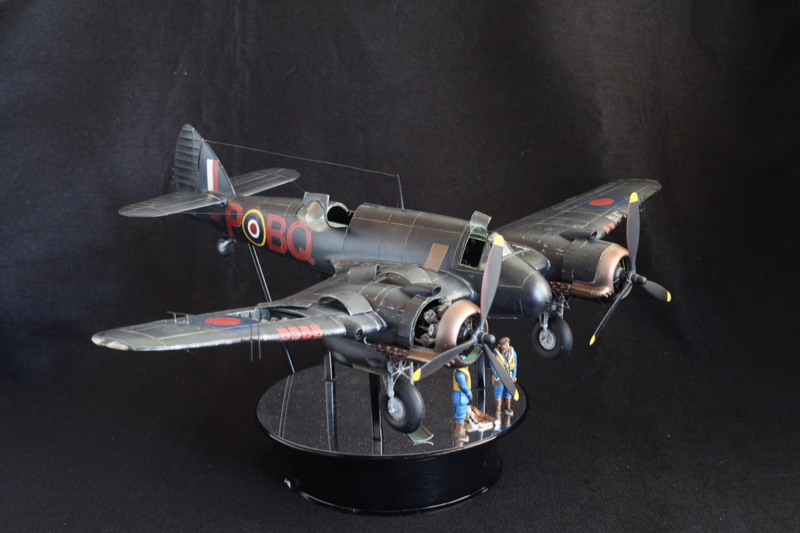 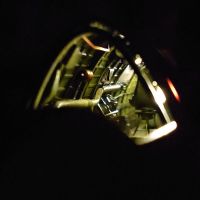 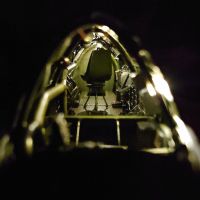 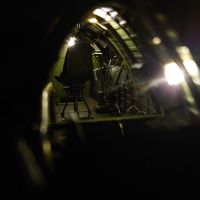 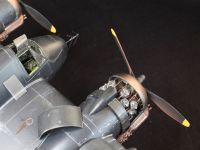