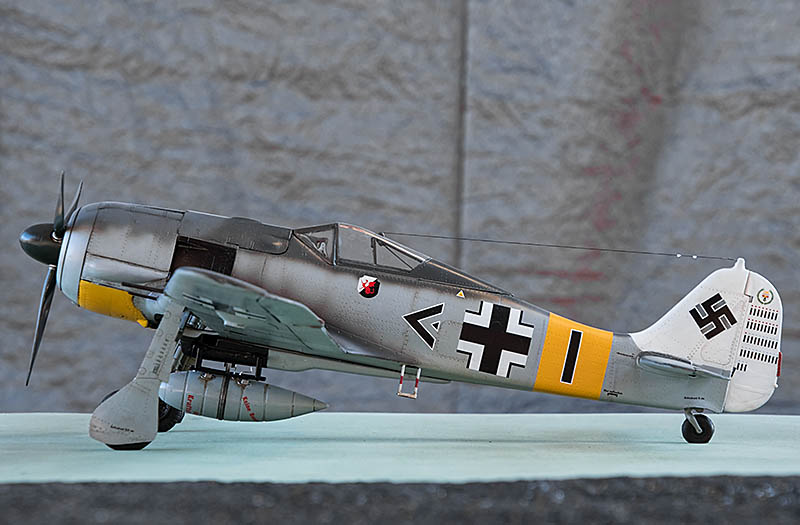 My 1/24 Airfix Focke-Wulf 190A-6 built and finished as “Black Double Chevron” of Major Anton “Toni” Hackl, Gruppenkommandeur III/JG 11, based in Oldenburg during April 1944. One of the top bomber killers, Hackl ended the war as Kommodore of JG11 with 192 victories (73 on the Western Front, of which 32 were four-engined bombers). At the time of writing still the only option available in this large scale to those interested in Kurt Tank’s seminal “Wurger” (Trumpeter offers an infinitely better D-9), the Airfix model looks about right when properly built, with a good outline and proportions (not to mention the all-important nostalgia factor – I believe it first came out in 1980), but suffers from a plethora of defects and mistakes as a kit. Among the major problems these are the worst:

All these defects can be corrected, but it is most important to be aware of the faults before committing to assembly and plan well in advance, as they will be impossible to put right once glue has set. Once faced and solved these faults, the kit will build reasonably well, with extra details added to suit the individual modeller’s taste. Mine was finished almost OOB with the decals provided – be aware however that in reality the rudder fin swastika (not provided by Airfix) was not overpainted as shown in most profiles, having been instead carefully masked by the ground staff before applying the white paint denoting the unit leader’s plane as per Luftwaffe regulations of the time. The model was painted in Xtracrylic RLM 74/75/76 with weathering being kept to the bare minimum, since Hackl was quite a disciplinarian and would not have tolerated a dirty plane - moreover, abundant photo evidence shows that in 1943-44 most mounts of Luftwaffe fighter aces were kept in top condition, often showing a distinct wax sheen.