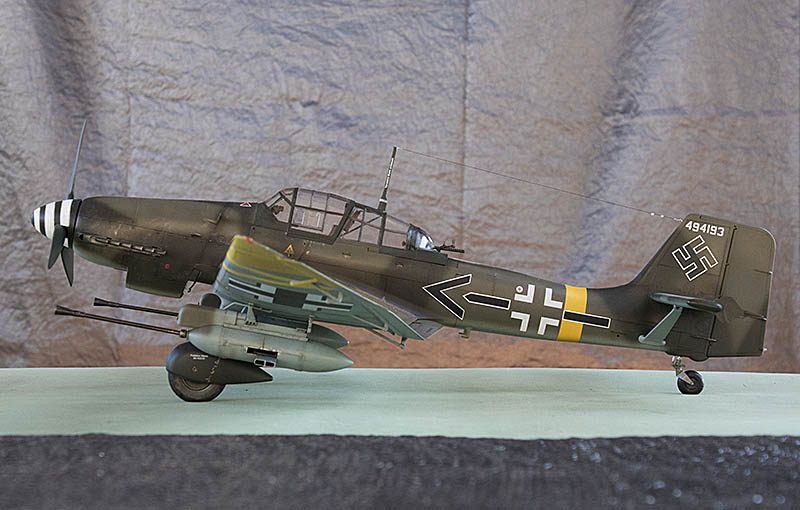 The Trumpeter 1/24 Ju 87G-2 is somewhat of an infuriating kit, exactly as its predecessor the D-5 Stuka dive bomber offered in the same scale by the same company. On the plus side we have a huge, impressive model of an historically-important ground-attack, tank-busting plane with clean, sharp, beautifully detailed, perfectly fitting parts, a nice set of photo-etched details and crystal-clear, delicate transparencies; on the minus side, one will have to work long and hard to address several inexplicable mistakes in the design of the kit to create a reasonably faithful reproduction of the original. Among the most glaring errors in the kit:

Other minor mistakes include an otherwise finely detailed cockpit tub which is however missing the internal armor plate protecting the rear gunner, the MG Zwilling ammunition belts and the pilot seat adjusting lever (all easily added if desired), the armored moveable cover of the pilot observation belly window being offered as a transparent part rather than a solid one (I just overpainted the kit part), a wholly imaginary bomb cradle (luckily not relevant to this version, as all the underwing stores found in the box) and the wing Balkenkreuzen decals being of the wrong type and size. Correct upper wing outline crosses were scrounged from the spare decals box, but the underwing ones had to be masked and painted (note that most G-2s featured larger-than-factory standard Ju 87 underwing crosses). Most stencils on the decal sheet are also spelled wrongly or just missing, and both the rudder fin WkNr and swastika had to be modified. However, the fuselage chevron-and-bar markings relevant to Hans-Ulrich Rudel’s plane – which is the one I have built - fit perfectly once the fuselage had been shortened, providing a near-perfect copy of those seen on the original. Was the finished model - finished in RLM 70/71/65 Mr. Color/Gunze acrylics and weathered with CMK pigments and artist’s oils as usual - worth all the trouble? Despite all the work and frustrations, if you are a Stuka fan as I am, the answer is probably yes, as the corrected and completed model is quite an eye-catcher.