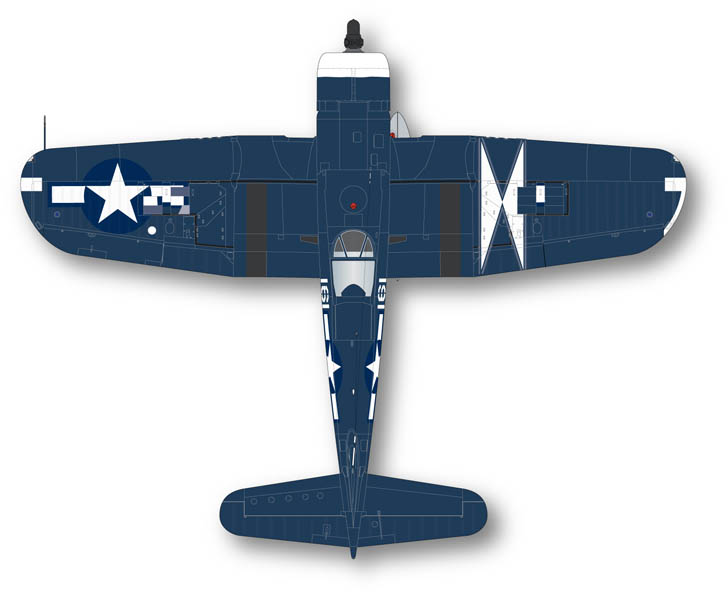 While researching our second F4U decal sheet last year, we came across some puzzling photos of late war F4U-1Ds aboard the carriers. The ammunition containers on the left wing of virtually every aircraft we saw displayed mismatched camouflage and national insignia, indicating that some swapping was going on. The post-1943 national insignia overlaps five of the six ammunition containers (as well as the hinged access panel between them), the tops of which form the upper surface of the wing. It was obvious that the containers could be swapped between various positions, but exactly how and why was a mystery. A couple of emails to our favorite F4U expert, Dana Bell, quickly made things much clearer, and we wanted to pass this interesting information along to you so you can build even more eye-catching and historically accurate Corsair models.

As originally designed, the F4U-1s had a unique ammunition container for each of the 12 positions (six per wing, two per gun). None of the containers was interchangeable with any of the others. If you consider how operations would be conducted in wartime, this situation would quickly turn into a logistical and maintenance nightmare. If one container was damaged, only a specific identical replacement could be used, meaning 12 different line items needed to be stocked just for the ammunition containers. And even if spare containers were available to allow re-arming of an aircraft while it was out on a mission, you still needed 12 different boxes for each aircraft, plus the headache of keeping track of which box was which, and which aircraft it belonged to. This photo shows the original ammunition box design: 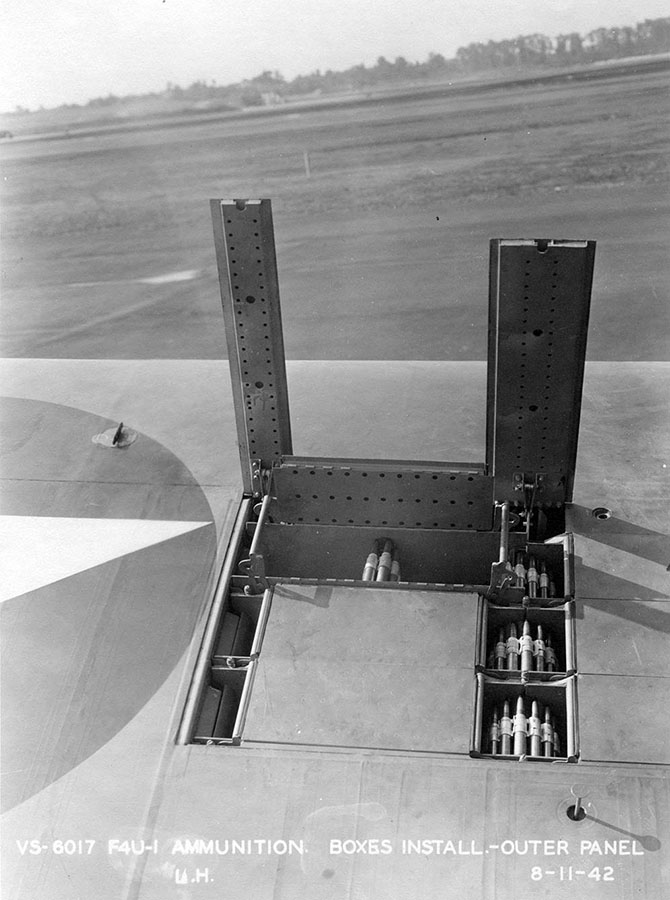 In mid-1942 the Navy’s Bureau of Aeronautics requested Vought Aircraft redesign the containers to allow for interchangeability of the containers, thus easing some of the logistical burden on the squadrons operating the Corsair. Vought complied, and by December of 1942 the redesigned containers were being installed on the assembly line.

The redesign resulted in only two types of container per side. The tops of the containers formed the aerodynamic surface of the upper wing, and the aft outboard containers (#2 on the left and #4 on the right) were positioned on the wing such that due to the shape of the airfoil and the taper of the wing, they required somewhat different dimensions compared to the other containers.

Two orders were issued to retrofit earlier aircraft with the new simplified containers. The first order specified reworking the containers on the first 79 F4U-1 production aircraft to the simplified type. The second order included the same rework as the first but added a requirement that on aircraft 80 through 156 the containers could quickly be modified to allow them to be swapped between the left and right wings. This involved moving the ammunition rollers so that the container would feed from the opposite side. The leading edge of the container was the same regardless of which wing it was installed on, with only the position of the rollers differing from side to side. Container #1 could be swapped with container #3, and container #2 could be swapped with container #4. This was standardized in production on aircraft 157. This diagram illustrates the numbering of the containers as used by Vought:

Briggs Corporation of Detroit produced all Corsair outer wing assemblies, regardless of whether the aircraft itself was built by Vought, Goodyear, or Brewster. Briggs also built the ammunition containers, and applied the national insignias on the wings (and to the ammunition boxes when the bars were added to the insignias in 1943) during production. Eventually each aircraft was shipped with a spare set of ammunition containers. This would in theory allow a lot of swapping of the #1 containers between any of five positions on the left wing, and #3 containers between any five positions on the right wing. 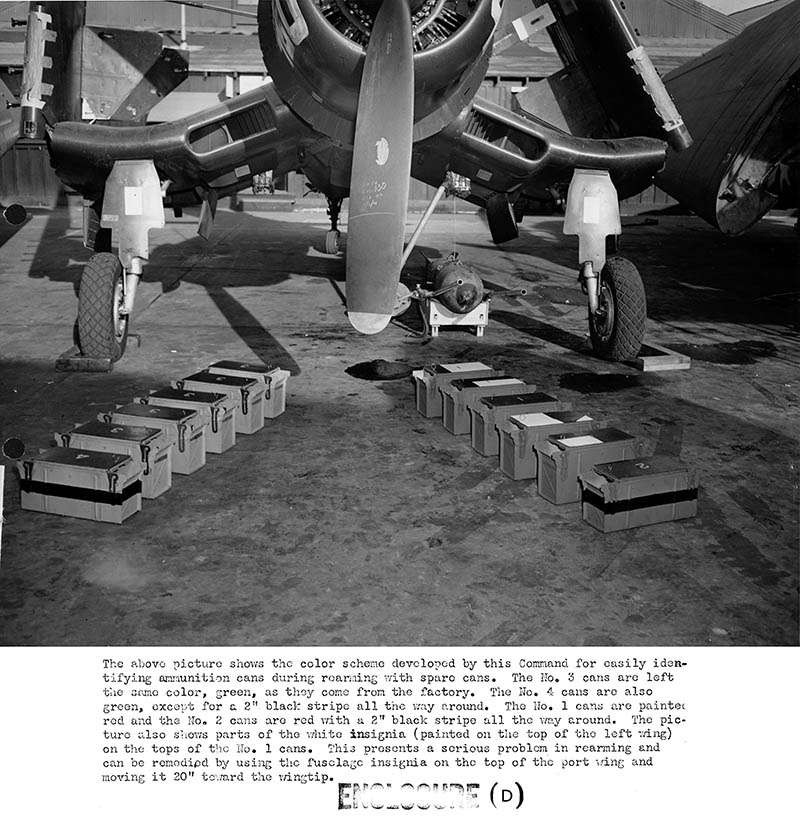 This neatly explains the patchwork appearance of many aircraft that is seen in the accompanying photos. An interesting side note is that on F4U trainers used stateside, this phenomenon is rarely seen. There was not the same urgency to get the aircraft re-armed and back on deck for a sortie that there was in the combat zone. While there may well have been spare ammunition containers at F4U training bases, it seems that swapping between positions on the same wing, and between aircraft was not nearly as common as it was aboard the carriers. By late 1943 the supply of spare containers appears to have been sufficient to eliminate the need to go to the trouble of changing the position of the ammunition rollers and swapping containers between the left and right wings.

In order to make this puzzle a bit less confusing from a modeling perspective, I have re-numbered the ammunition containers that were built with the national insignia already applied to them. Containers 1, 2, 4, 5, and 6 were all readily interchangeable on the left wing. Remember that container 3 was the odd man out, and was always installed in the same position. 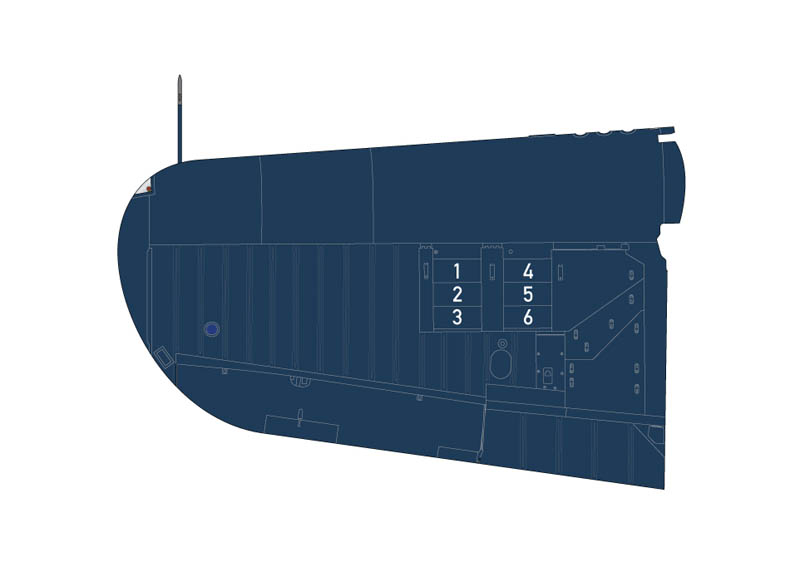 As there were spare containers available on the carriers, armorers could reload them while their aircraft were out on a mission. Containers could - and did - show a variety of colors from other camouflage schemes. Corsair upper wing camouflage moved from Non-specular Blue-Gray to Semi-gloss Sea Blue to Gloss Sea Blue in the span of less than 18 months, so it is not unreasonable to think that even an F4U-1D aboard a carrier in mid-1945 might well have had ammunition containers robbed from a birdcage F4U-1 painted in NS Blue-Gray. Certainly there is plenty of evidence for these late aircraft having containers painted in Semi-gloss Sea Blue. Since the original blue disk national insignia (in use before 28 June 1943 when the bars and red surround were ordered) did not cover the ammunition containers, NS Blue-Gray containers would not have displayed any Insignia Blue or Insignia White on them.

Adding to the potential for “interesting” looking wings is the fact that contemporary Briggs documents mention the white paint on the national insignias turning yellow due to a mold preventative compound used on the doped fabric portions of the wing. This means that the portion of the insignia painted on the doped fabric part of the wing might have had a more yellowed appearance than the enamel paint used on the ammunition containers. Other documents speak about the use of decals for the national insignias (on both the fabric and metal surfaces presumably), but there is no hard evidence for when or how often Briggs used painted-on insignias vs decals.

So now let’s do a little math (I know, I don’t like math either)… On Corsairs with the blue-bordered national insignia, the five interchangeable containers on the left wing all had a different paint pattern on them, as shown below. So using just those five from the same aircraft, you get no fewer than 3,125 (55) different possible combinations of the appearance of the left wing. Then factor in the possibility of containers painted Semi-gloss Sea Blue or even NS Blue-Gray and you start getting into some big numbers. Add to that the possibility of swapping the hinged access panel between the ammunition containers between the left and right wings (as has been documented) and the possibilities are staggering!

This diagram shows the appearance of each container individually. 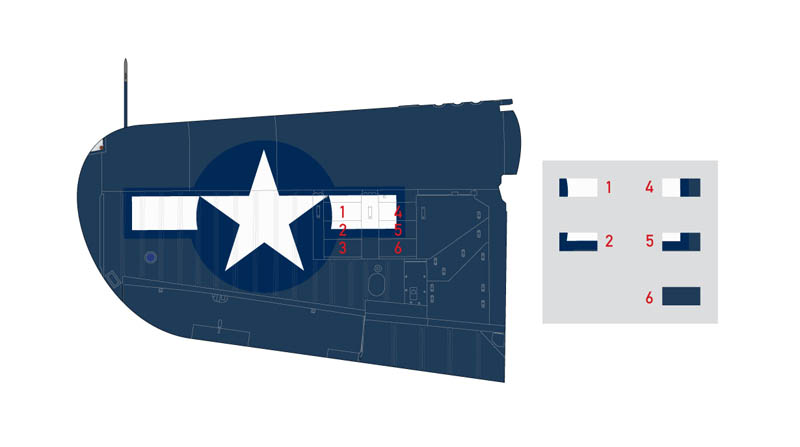 So by simply randomizing which of the five numbered containers goes into any given position, these are just two of the thousands of possible combinations you could have seen. And this does not take into account the different camouflage colors.

With a little history on how this phenomenon came to be, it’s much easier to build a model of a wartime Corsair with an even more interesting appearance than most modelers have been aware of to date. As a note, post-war the insignia was revised and moved outboard of the ammo containers, so this problem went away.

In short, it’s almost impossible to be incorrect in applying this interesting phenomenon to your model. To make things a bit easier for you, Fündekals is producing F4U ammunition container decals with the national insignias on them as shown above in all three popular scales. They are printing now, and we will provide more detail on them as we have it. The 1/32 sheet is shown below. 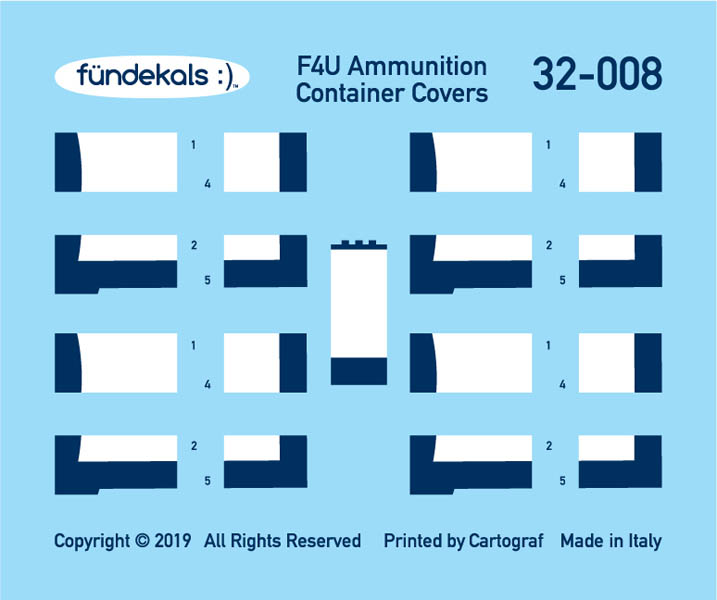 The following are some photographic examples of the patchwork appearance of Corsair wings on F4U-1Ds aboard the carriers in 1945. Note that after VF-17s abortive attempt to introduce the Corsair to the US Navy in 1943, the F4U was not seen in any numbers aboard any US carrier until Lt Col. Millington took his Marines of CVG-4 to sea aboard USS Essex in late December of 1944. By that point, all Corsairs in combat service were painted in overall Gloss Sea Blue, but as you can see, ammunition containers painted NS Sea Blue (and possibly even NS Blue-Gray) were quite commonly seen. We speculate that the odd colors are most likely NS Sea Blue, since Gloss Sea Blue would have been fairly freshly applied at that stage, and in any event was not as prone to fading and color shifting as the earlier non-specular colors. 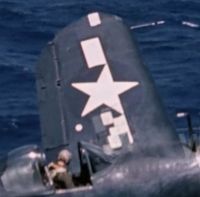