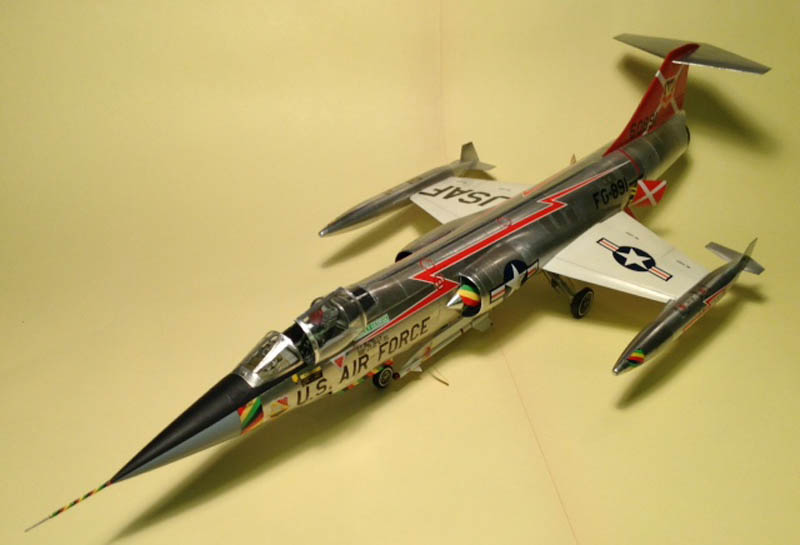 Colonel George Laven was a WWII Ace who flew P-38s in the Pacific Theater. He later became the Commander of the 479th Tactical Fighter Wing at George Air Force Base, CA, which flew the Lockheed F104C Starfighter. The 479th TFW had 4 subordinate squadrons, each marked with stripes of a designated color--red, blue, green or yellow. When the 479th transitioned into the F-104C, Lockheed and Colonel Laven's Crew Chief had his F-104 painted in flashes comprised of all four squadron colors, with red fuselage lightning bolts, a red tail and airbrakes with white X's, and white wall tires! Since the 479th was based at George AFB, and commanded by George Laven, Laven's F-104C was nicknamed "Really George". It likely was the most colorful USAF F-104C that ever flew, and gained the ire of the Air Force brass for the flamboyant markings, but for awhile, it was the "hottest" looking hot rod in the skies.

I really like Hasegawa's F-104C. It's old, but accurate in shape, with finely raised panel lines. It hasn't got the "bells and whistles" of Italeri's newer offering, but it also doesn't come with the $125++ price tag or the heavily engraved "trench" panel lines either. With some work Hasegawa's oldie is still a great kit. I like it so much I have two more in the kit stash. Others here on LSP have done some great features on how to foil this kit. I built mine about ten years ago, as my educator wife wanted something colorful and "fast looking" to hang from the ceiling of her classroom since her education theme was "where learning takes flight". So it hung there with thirty other scale aircraft from the Wright Flyer to the Space shuttle. This big flashy F-104C never failed to elicit comments from anyone that entered the classroom. It's the only model I kept from her room when she retired two years ago - the rest were given to students, but I couldn't part with this F-104C. 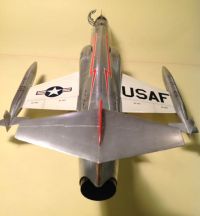 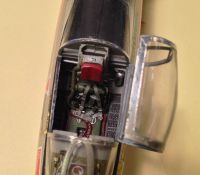 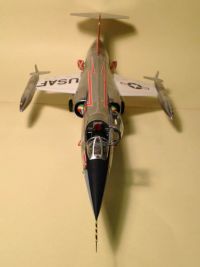 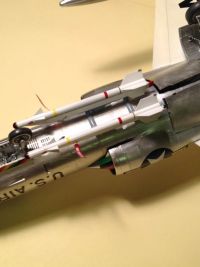 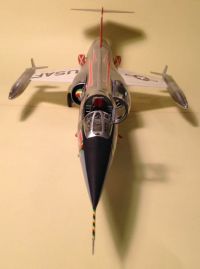 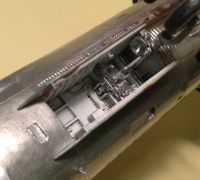 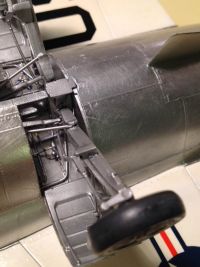 Other than what's mentioned above, everything else is out of the box. I understand Aires has released an interior for this kit, and I've acquired two Verlinden interiors for my unbuilt kits since I built this model, along with two of Eduard's J79 "tail feather" sets for my next Starfighter builds. It took about 100 hours to build this model, most of the time was spent on the cockpit, foiling, and carefully applying decals. Hasegawa came up with a goodies back in the '70s when this kit was released in the "Minicraft" boxing. It's been updated in several later releases, along with their F-104G. I think they are nice kits, despite being eclipsed by Italeri's more detailed and engraved panel offering, which has a few warts along with a rather hefty price tag. With some "elbow grease" and some aftermarket details, these old Hasegawa kits can still hold their own against the newcomer. I have two more in my stash, which will be modified to represent Chuck Yeager's NF-104, and a NASA Chase plane. Now that Italeri has released their new kit, you can pick up this oldie for as low as $25 which is a steal and some cheap fun for a 1/32 jet aircraft kit.