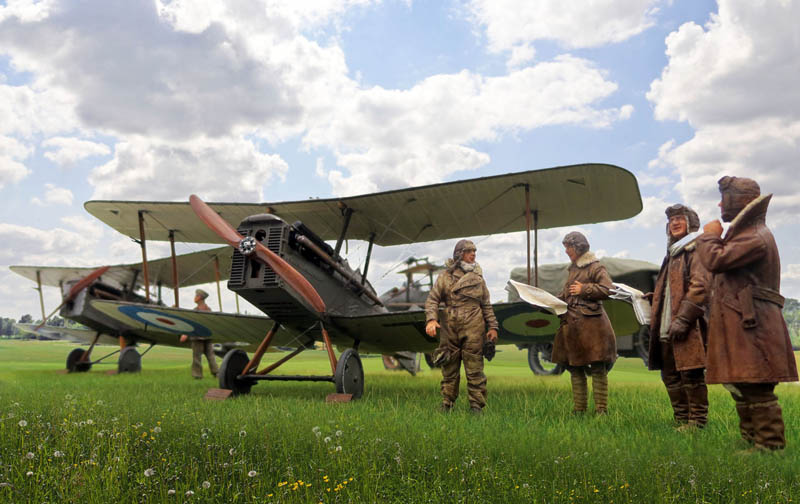 The diorama is originally inspired by the film 'Aces High' (1976 TV movie). I have always wanted to do a S.e.5a diorama. I think the film catches the atmosphere of the RFC during WWI!

Although the 'Aces High' film is showing its age today, it stayed with me and did make a lasting impression on me. So I picked up the challenge, trying to get this project come to life.

To get ‘feel’ of a Squadron, I knew that it would require several completed S.E.5as and it was quite the job getting this far. Beside the Crossley Tender & Trailer, one of the planes has its engine being serviced by a ‘fitter’, and a scratch build hand cart, often seen in RFC Aerodromes, is used to carry parts, a Vickers transit chest and toolboxes required for the repairs. Pilot’s of the 74th Squadron are exchanging information/planning the next patrol.

The three planes I chose to depict in the diorama, are the ones of Squadron Commander Keith 'Grid' Caldwell (NZ), D6864, James Ira 'Taffy' Jones (GB) C1117 'T' and of Frederick Stanley 'Freddie' Gordon (NZ), D3438 'Z' - The last one without the wings, is done as C6459 'C'. It could have been the one flown by Sydney 'Timbertoes' Carlin, but I have not yet been able to confirm this.

It's a depiction of a day in the No. 74 Squadron based at Clairmarais, France 1918. On 30. July 1918, 'Taffy' Jones brought down three German planes, a Rumpler C and a LVG C around noon and a Fokker D VII at 17:50 in the evening. The Squadron Commander Keith Caldwell, also brought down a Fokker D VII on this day:

Construction, detailing and painting the 3½ S.E.5as, was a massive undertaking. Early on I decided to convert the ‘Hisso’ engined planes into the later type equipped with the more stable Wolseley Viper engine. Also the dope color, is the later PC12 dope, which was more towards chocolate brown than the earlier PC10 Khaki or olive drab. Decals are a mix of masked off letters, kit decals and a homebrew of markings done with decal paper and printed. Rigging was done with Prym elastic thread and monofilament. For the anchor points, I used micro brass tube and tiny homemade eyelets from thin steel wires. Several photoetch detail sets from Eduard, HGW and Part were used.

The figures for the diorama are Model Cellar, Kellerkind Miniatures, D-Day Miniature Studio, with some minor alterations/additions. Some RFC ‘fitters’ are done from Airfix multipose figures and some parts from the spares box.